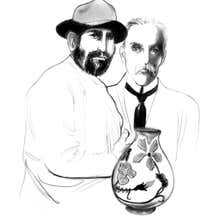 French Art Nouveau Marjorelle Iron Table Lamp w/ Daum Nancy Glass Shade, ca.1900
By Daum
Located in Petaluma, CA
This lamp is a fine example of art nouveau workmanship. The base displays great skill in wrought iron workmanship and the shade is art glass and signed by the Daum, one of the best g...
Category

Daum, Incised Art Deco Glass Vases, France, Early 20th Century
By Daum
Located in New York, NY
The process used on this particular vase is acid etching, involving the dissolution of silica into an acidic mixture, and the application of this mixture to this glass after blowing ...
Category

Daum Cameo Glass Bowl with Silver Cover
By Daum
Located in London, GB
The frosted bowl overlaid and acid-etched with roses, the blooms picked out in gilt, the silver cover embossed with roses and rose hips, glass signed Daum Nancy with Cross of Lorraine.
Category

Daum France Limousine Imperial Crystal Car
By Daum
Located in Guaynabo, PR
This is a large Daum frosted and clear crystal car. The limousine car is full of details inside and out. It is signed Daum, France in the running board and also has the sticker of it...
Category

Daum Nancy Acid-Etched Glass Vase, circa 1925
By Daum
Located in CABA, AR
Signed in intaglio and with cross of lorraine, France, circa 1925. Very interesting size. It has a minor chip inside due to fabrication, it is not cracked.
Category

Art Nouveau Cameo Vase with Tulip Decor & Gilding, Daum Nancy, France, ca 1890
By Daum
Located in Vienna, AT
Baluster vase on a stepped base ring, bulbous body with a short neck and flared mouth rim, colorless glass with flaky green powder inclusions in the lower area and rusty brown in the...
Category

Art Deco Chandelier by Daum, Nancy France, in Pate de Verre, circa 1940
By Daum
Located in Merida, Yucatan
Beautiful 3-light chandelier. Executed in 4 separate pieces of glass in the "P@te de Verre" technique. Manufactured and signed by Daum in Nancy, France circa 1940.
Category

Signed Daum France Pate De Verre Frog Sculpture Figurine Mid-Century Modern 1970
By Daum
Located in Miami, FL
This green Frog Figurine, Animal Sculpture is made from a technique called Pate De Verre. Very difficult process which adds to the beauty of this item. Marked Daum France at the B...
Category

Daum Nancy Cameo Scenic Art Nouveau Vase
By Daum
Located in Dallas, TX
A warm scenic tall vase by Daum Freres from Nancy France circa 1900. The scene is a landscape with lake and green trees and bushes in the fore and back ground. The interesting featur...
Category

Daum furniture for sale on 1stDibs

Daum furniture are available for sale on 1stDibs. These distinctive objects are often made of glass and are designed with extraordinary care. There are many options in our Daum collection of furniture, although brown editions of this piece are particularly popular. We have 363 vintage editions of these items in-stock, while there is 0 modern edition to choose from as well. Many original furniture by Daum were created in Europe during the 20th century in the Art Nouveau style. Many customers also consider furniture by Emile Gallé, Charles Vital-Cornu and Clement Massier if you are looking for additional options. The prices for Daum furniture can vary depending on size, time period and other attributes. The price for these items starts at $275 and tops out at $85,000, while pieces like these can sell for $4,500 on average.