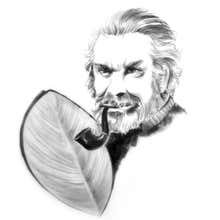 Tapio Wirkkala Coffee Table
By Tapio Wirkkala
Located in Toronto, Ontario
Designed for Asko, Finland in 1958. These tables are highly sought after and regarded as Tapio Wirkkala's most important production furniture. Made from hand-sculpted solid el...
Category

Bolle Vase in Grass Green, Amber-Yellow and Violet by Tapio Wirkkala
By Tapio Wirkkala, Venini
Located in Brooklyn, NY
A vase turns into a bottle for Tapio Wirkkala. Apple green, yellow and purple. Three distinct spaces of colour that blend together thanks to the "Incalmo" technique, a process by whi...
Category

Original 1977 Tapio Wirkkala "Paper Bag" Ceramic Vase for Rosenthal
By Tapio Wirkkala, Rosenthal
Located in Grand Cayman, KY
Paper or plastic or…Wirkkala’s fun and whimsical 1977 Pop Art take on tromp l’oeil, something that is not what it appears to be. Here, a used paper bag is actually a porcelain vase. ...
Category

Venini Bowl 'Coreano', Designed by Tapio Wirkkala in 1966
By Tapio Wirkkala, Venini
Located in Berghuelen, DE
A blue and green a fasce a spirale bowl from the Coreani series. Designed in 1966 by Tapio Wirkkala for Venini. Produced by Venini, Murano. Incised signature "venini italia TW" on th...
Category

Bolle Vase in Straw-Yellow and Grass Green by Tapio Wirkkala
By Venini, Tapio Wirkkala
Located in Brooklyn, NY
Perfection lies in the middle, striking the perfect balance. A vase turns into a bottle for Tapio Wirkkala. Straw Yellow and Apple Green. Two distinct spaces of colour that blend tog...
Category

Bolle Vase in Straw-Yellow and Grass Green by Tapio Wirkkala

Tapio Wirkkala Cocktail Table in Birch and Metal for Asko

Tapio Wirkkala "Paper Bag" Ceramic Vase for Rosenthal
By Tapio Wirkkala, Rosenthal
Located in Grand Cayman, KY
Paper or plastic or…Wirkkala’s fun and whimsical 1977 Pop Art take on tromp l’oeil, something that is not what it appears to be. Here, a used paper bag is actually a porcelain vase. ...
Category

Furniture from Tapio Wirkkala are available for sale on 1stDibs. These distinctive objects are often made of glass and are designed with extraordinary care. In our collection of Tapio Wirkkala furniture, there are many options to choose from, although gray editions of this piece are particularly popular. 209 vintage editions of these items are in stock, while there are 7 modern editions to choose from as well. Many original furniture by Tapio Wirkkala were created in Europe during the 20th century in Scandinavian Modern style. Many customers also consider furniture by Gunnel Nyman, Saara Hopea-Untracht and Toini Muona if you’re looking for additional options. Tapio Wirkkala furniture prices can vary depending on size, time period and other attributes. Price for these items starts at $61 and tops out at $46,729, while pieces like these can sell for $1,750 on average.