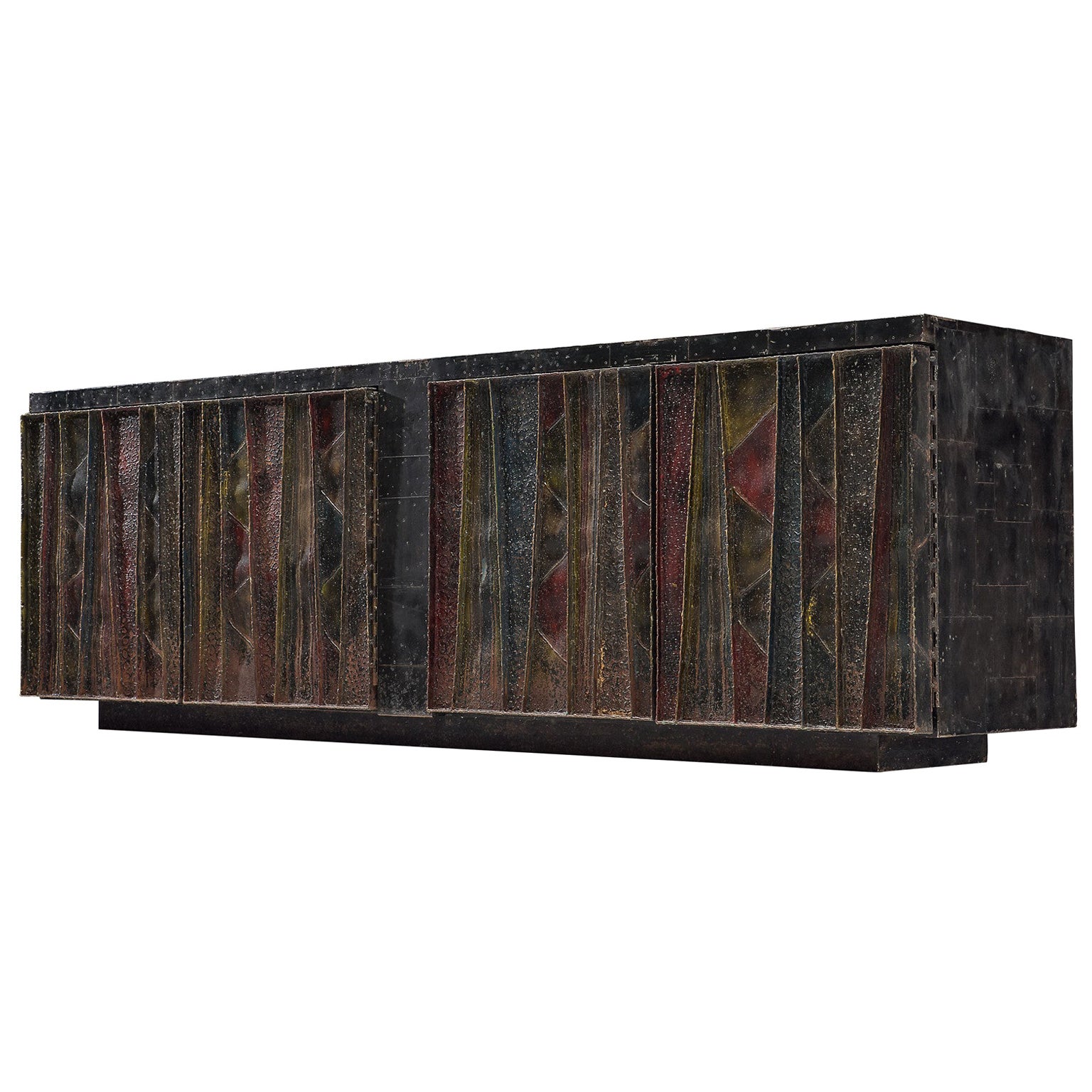 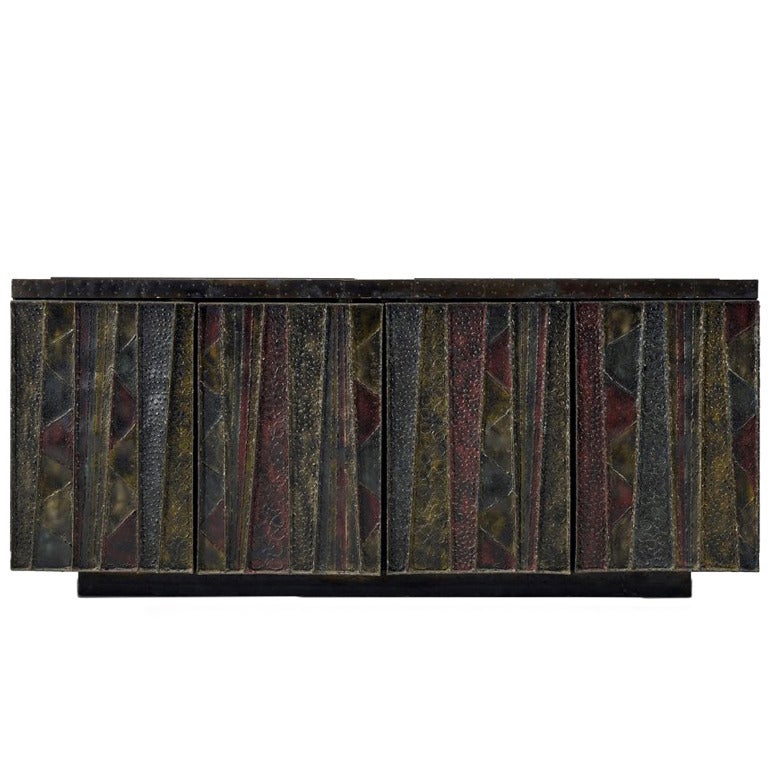 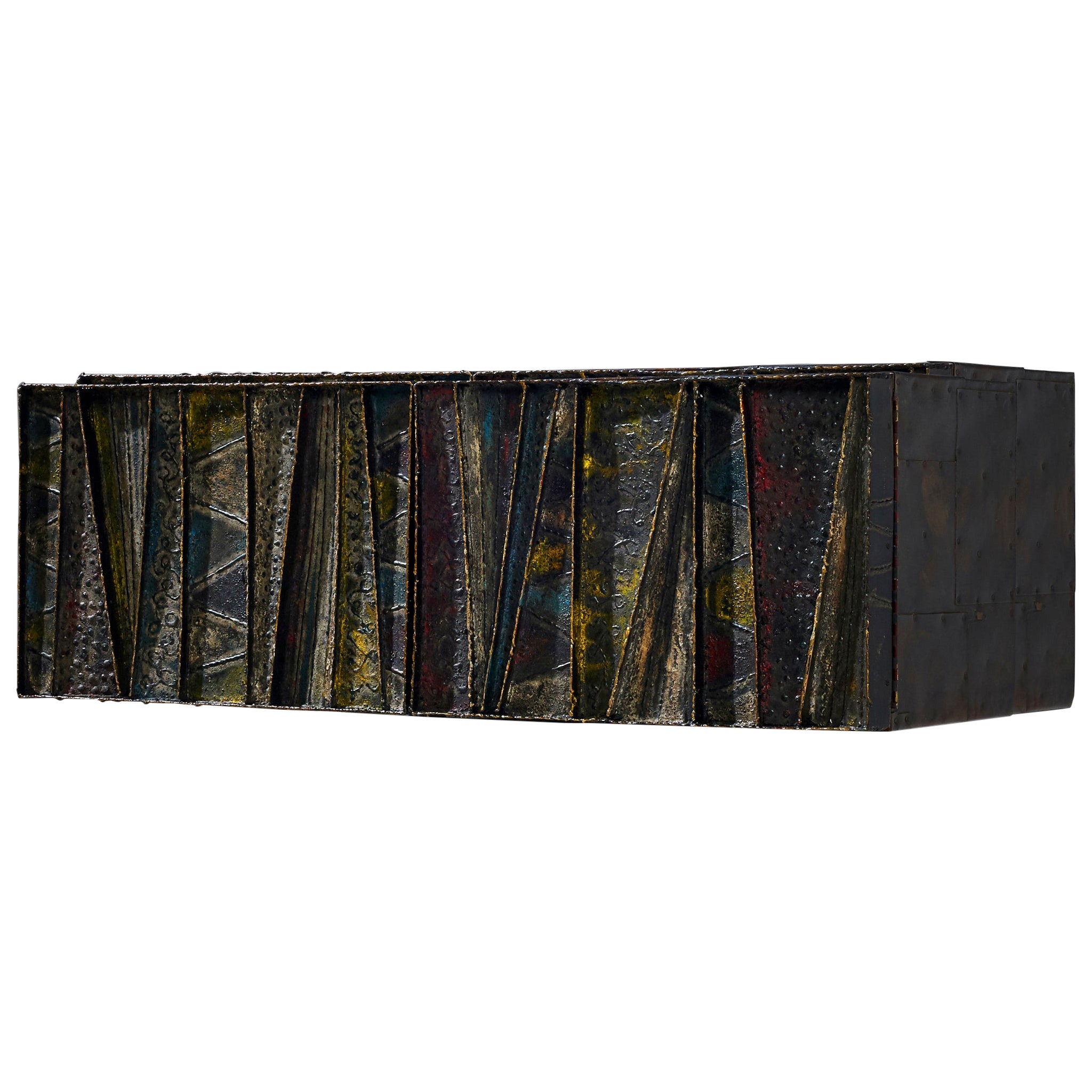 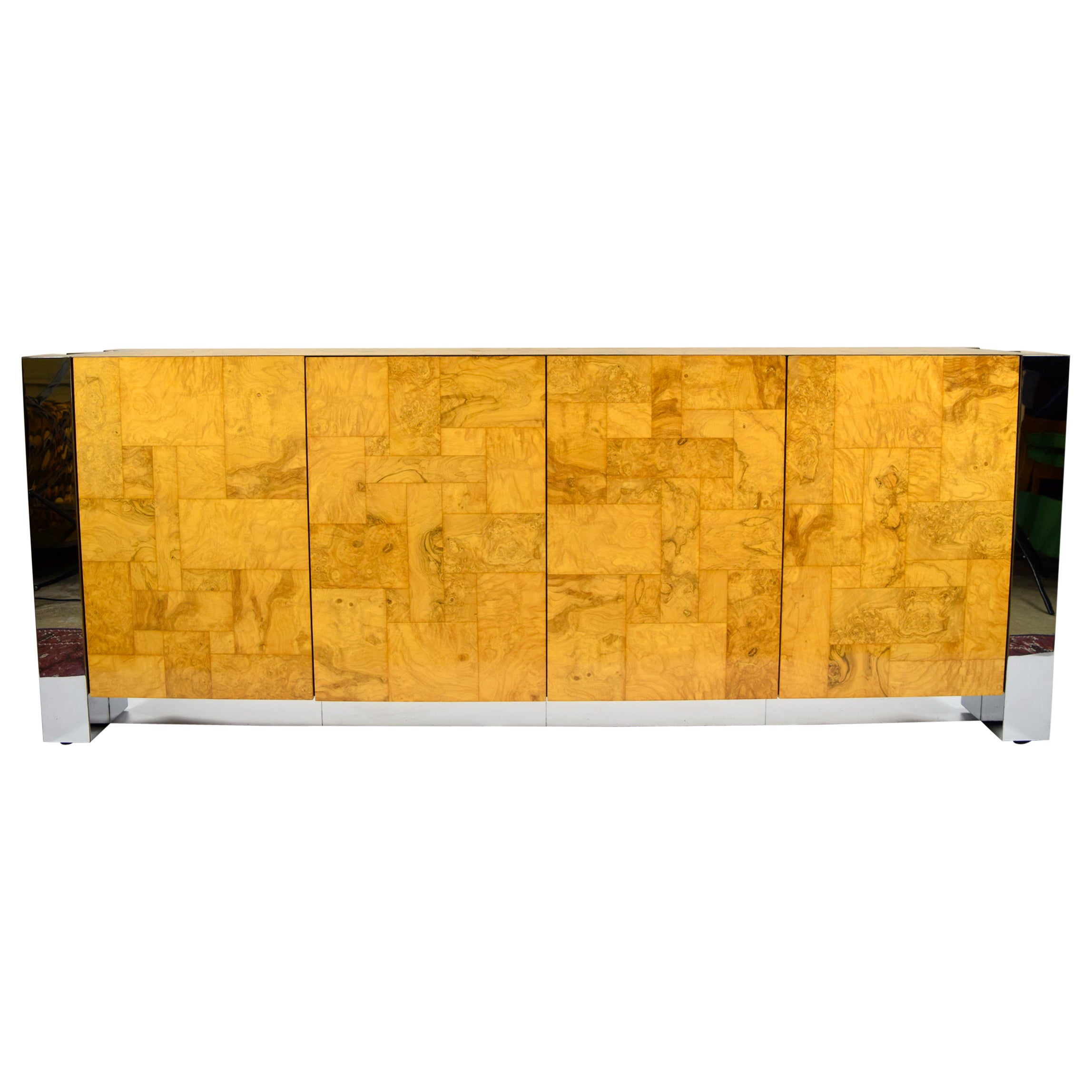 Paul Evans Cityscape Credenza in Burl and Chrome by Directional 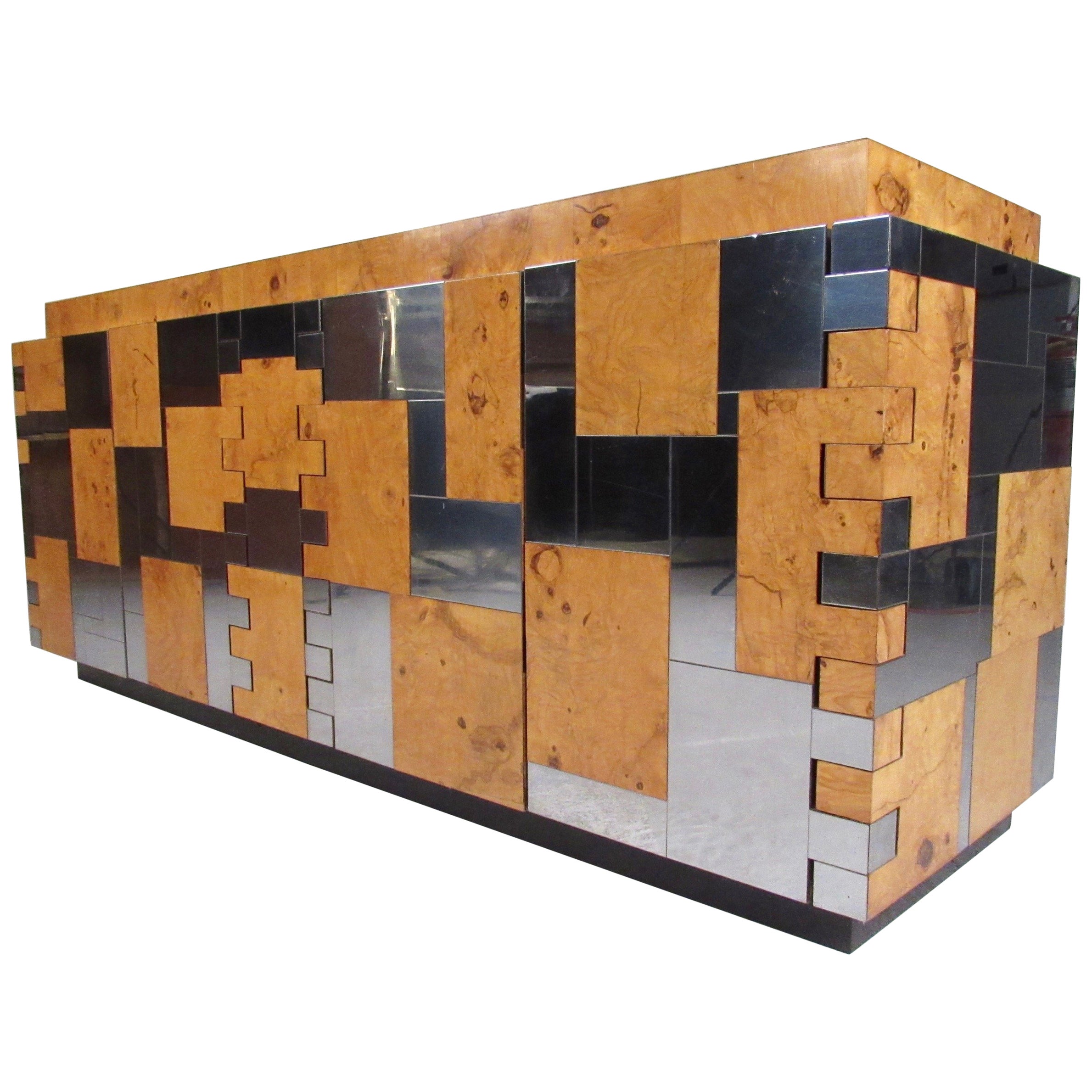 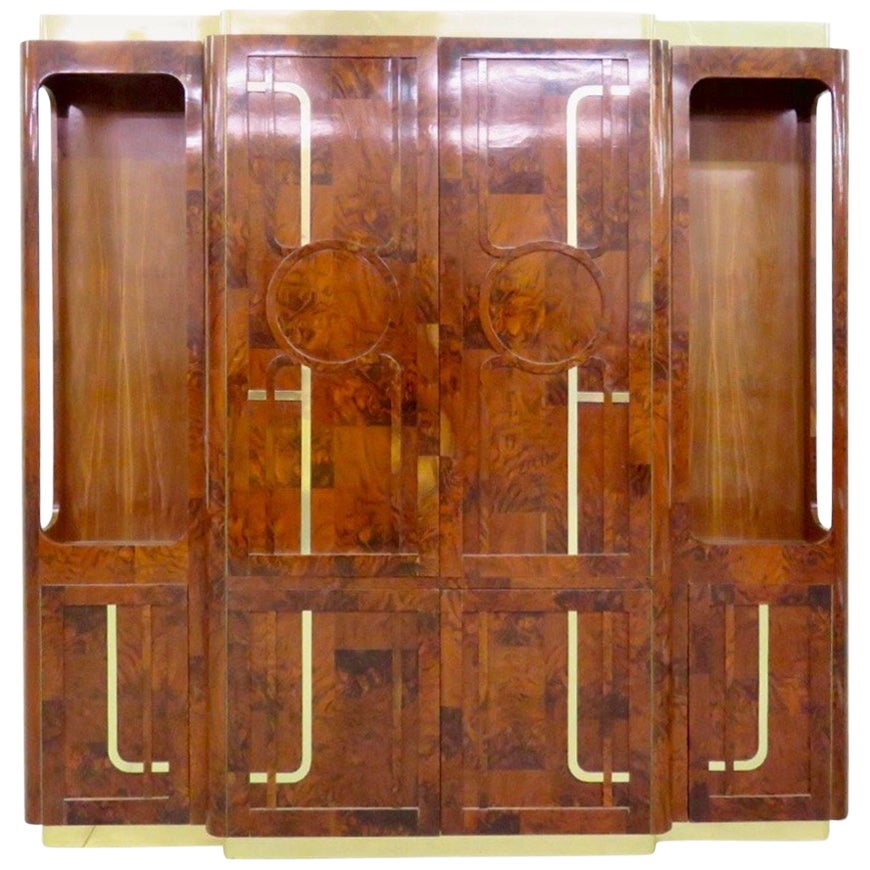 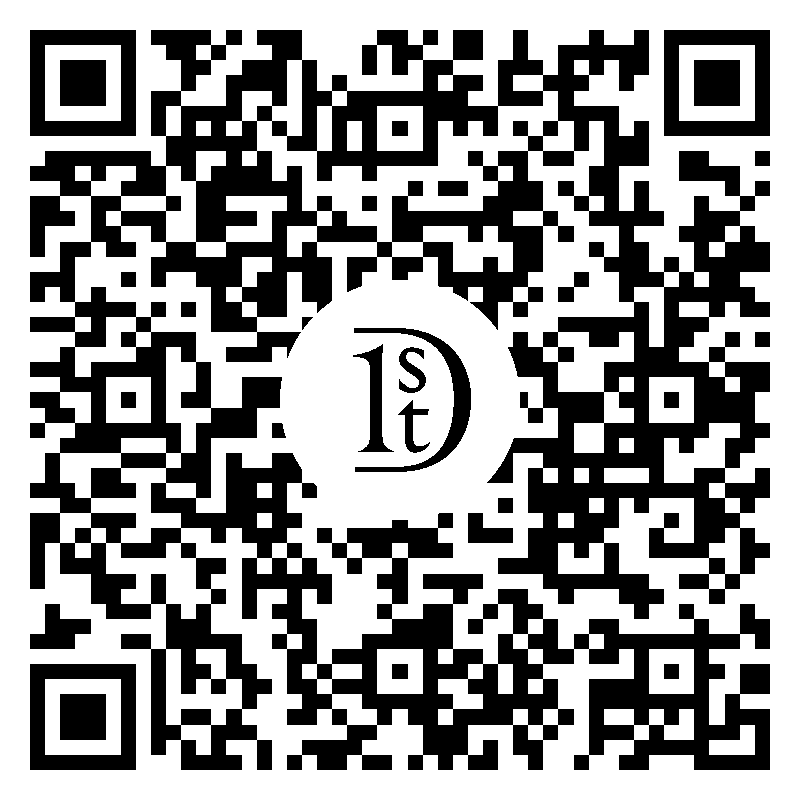 Paul Evans for Directional, 'Faceted' wall-mounted cabinet, chromed steel, olive ash burl, glass, United States, 1970s A beautiful wall-mounted sideboard by Paul Evans for Directional. The piece is an excellent example of how Evans’ Cityscape series evolved into an even more three-dimensional style, known as “Faceted” with a play of depth and dimension. Each piece from this series was made by hand, with fiberglass molds that were filled with foam and sealed with bolts. The foam was covered with wood or metal and attached to cabinets and other pieces. This wall-mounted cabinet features a striking contrast between chromed steel and olive burl surfaces. The two bi-fold hinged doors open to the side accessing the inside of this wall-cabinet. The top of the cabinet is executed in angular placed wooden burl creating a vibrant look. Paul Evans (1931-1987) interest in haptic quality of this designs was visible from early in his career and mostly realized with metal and chrome. In 1950 Evans started attending the School for American Craftsman. Five years later he started sharing his showroom with Phillip Lloyd Powell and together they start collaborating until 1966. Powell’s woodwork and Evan’s metal craftsmanship combined into a creative partnership. In 1964 Evans starts working together with the Directional Furniture Company. In the early 1970s Evans published his cityscape designs. In 1974 Evans introduced the PE 400 series consisting of walnut burl, olive ash burl, English oak burl in contrast with metal. The development within his oeuvre is clearly seen in the change from mostly metal based works towards pieces working with the effect of chrome surfaces capturing the disco aera towards the PE 400 series where Evans developed the popular Cityscape series l and ll into an three dimensional design with the contrast between natural wood and chrome surfaces. On the other hand features the ‘Patchwork Series’ in the 1970s again more flat surfaces in use of copper, brass and other metals. Evan’s oeuvre has an impressive size especially when regarding all pieces were handmade. VAT within the EU: When buying or delivering an item within the EU, VAT usually applies and will be added.

A designer and sculptor, Paul Evans was a wild card of late 20th century modernism. A leading light of the American Studio Furniture movement, Evans’s work manifests a singular aesthetic sense, as well as a seemingly contradictory appreciation for both “folk art” forms and for new materials and technologies.


Evans’s primary material was metal, not wood, which was favored by his fellow studio designers, and Bucks County, Pennsylvania, neighbors George Nakashima and Philip Lloyd Powell. He trained in metallurgy and studied at the Cranbrook Academy of Art, the famed crucible of modern design and art in suburban Detroit. For a time early in his career, Evans also worked at Sturbridge Village, a historical “living museum” in Massachusetts, where he gave demonstrations as a costumed silversmith.

Evans’s later work falls into three distinct style groups. His sculpted-bronze pieces, begun in the mid-1960s, show Evans at his most expressive. He employed a technique in which resin is hand-shaped, and later sprayed with a metal coating, allowing for artistic nuance in the making of chairs, tables and cabinets. Later in the decade and into the 1970s, Evans produced his Argente series: consoles and other furniture forms that feature aluminum and pigment-infused metal surfaces welded into abstract organic forms and patterns.

Last, Evans's Cityscape design series meshed perfectly with the sleek, “high tech” sensibility of the later ’70s. Evans constructed boxy forms and faced them with irregular mosaic patterns that mixed rectangular plaques of chromed steel, bronze or burlwood veneer. These, like all of Paul Evans’s designs, are both useful and eye-catching. But their appeal has another, more visceral quality: these pieces have clearly been touched by an artist’s hand.

Recognized Seller
These prestigious sellers are industry leaders and represent the highest echelon for item quality and design.
Diamond Seller
These expertly vetted sellers are 1stDibs' most experienced sellers and are rated highest by our customers.
Established in 2006
1stDibs seller since 2012
3,128 sales on 1stDibs
Typical response time: 1 hour
Associations
20th Century Specialists
More From This Seller
View All From Seller

Paul Evans Cityscape Credenza in Burl and Chrome by Directional