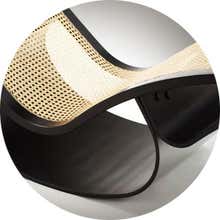 Commencing in the 1940s and '50s, a group of architects and designers transformed the local cultural landscape in Brazil, merging the modernist vernacular popular in Europe and the United States with the South American country's traditional techniques and indigenous materials.

Key mid-century influencers on Brazilian furniture design include natives Oscar Niemeyer, Sergio Rodrigues and José Zanine Caldas as well as such European immigrants as Joaquim Tenreiro, Jean Gillon and Jorge Zalszupin. These creators frequently collaborated; for instance, Niemeyer, an internationally acclaimed architect, commissioned many of them to furnish his residential and institutional buildings. The popularity of Brazilian mid-century furniture has made household names of these designers and other greats. Their particular brand of modernism is characterized by an émigré point of view (some were Lithuanian, German, Polish, Ukrainian, Portuguese, Italian), a preference for highly figured indigenous Brazilian woods, a reverence for nature as an inspiration and an atelier or small-production mentality.

Hallmarks of Brazilian mid-century design include smooth, sculptural forms and the use of native woods like rosewood, jacaranda and pequi. The work of designers today exhibits many of the same qualities, though with a marked interest in exploring new materials (witness the Campana Brothers' stuffed-animal chairs) and an emphasis on looking inward rather than to other countries for inspiration.

Find a collection of vintage Brazilian furniture on 1stDibs that includes chairs, sofas, tables and more.

Rococó Dresser in Cedro Rosa carved wood - With artisans from Brazil
By Maria Fernanda Paes de Barros
Located in Sao Paulo, SP
This chest of drawers is made in solid pink cedar wood carved by the craftsman Rondinelly Santos (Tiradentes, MG) specialized in sacred art. The flowing design of the acanthus scrol...
Category

Wall Mounted Variation on the "Marquesa" Dresser by Sergio Rodrigues, 1965

Midcentury Mirrored Dressing Table in Sycamore and Walnut, France, circa 1950

H 31.5 in. W 62 in. D 18.5 in.
Mora Dresser
Located in Northfield, MN
The Mora dresser is as functional as it is sculptural. Drawers with concealed pulls have soft-close slides and solid maple drawers. Each surface boasts it’s own unique yet consistent...
Category

H 63 in. W 40.16 in. D 8.75 in.
Midcentury High-Quality Wooden Dresser with Glass Top, Italy
Located in Bresso, Lombardy
Italy, 1950s. This is a high-quality dresser that is made in walnut and features a quite thick glass top and brass handles and feet caps. It is a vintage piece, therefore it might...
Category

H 33.13 in. W 77.25 in. D 18.75 in.
Lacquer Storage Dresser & Credenza with Bleached Wood & Lucite Drawer Fronts
By Modshop
Located in Compton, CA
This new credenza uses a bleached rift oak door fronts made in a wide chevron pattern. Coupled with our Hexagon Lucite knobs makes this a perfect addition to any bedroom. Dimensio...
Category

H 35.38 in. W 39.5 in. D 17.63 in.
Cimo 1960s Brazilian Jacaranda Wood Sideboard or Dresser
By Moveis Cimo
Located in Los Angeles, CA
Cimo sideboard from the 1960s made of Brazilian jacaranda wood with four drawers with jacaranda handles. Could also be used as a dresser.
Category

H 30 in. W 63.5 in. D 18.5 in.
Rococo Dresser in Cedar Wood
By Maria Fernanda Paes de Barros
Located in Sao Paulo, SP
This chest of drawers is made in solid pink cedar wood carved by the craftsman Rondinelly Santos (Tiradentes, MG) specialized in sacred art. The flowing design of the acanthus scrol...
Category

H 29 in. W 43 in. D 20 in.
Midcentury Brazilian Nightstands in Caviuna Wood
Located in New York, NY
Midcentury dressers in Brazilian caviuna wood from the 1950s. Each has recently upholstered drawers with shagreen leatherette. Each has four drawers with a circular brass drawer pull...
Category

H 32 in. W 63 in. D 23.25 in.
Pair of Scapinelli 1960s Dressers in Brazilian Wood
By Giuseppe Scapinelli
Located in New York, NY
A pair of Giuseppe Scapinelli dressers, produced circa 1960s, crafted of Brazilian wood, with asymmetrical bookmatched front, either with single rounded corners and raised on tapered...
Category

H 29.5 in. W 17.75 in. D 56.25 in.
A Fine Brazilian Modern Jacaranda Highboy, 1950s, Sergio Rodrigues
By Sergio Rodrigues
Located in Hollywood, FL
With 8 drawers on the left and a tambour door on the right revealing 8 further interior drawers, purchased from Mr. Rodrigues in Rio in 2002. Prototype, never put into production. ...
Category