You don’t have to be a vexillologist to wonder why the American flag has changed over the years (or why it was designed with stars and stripes in the first place). Questions like that serve as a portal into a fascinating world with deep roots in heraldry and a robust following among collectors. The flag of the United States — particularly its blue field with white stars — has changed quite a bit since it was first used to represent the Thirteen Colonies.

In honor of July 4th, Americana expert Jeff Bridgman, whose eponymous gallery is in York, Pennsylvania, illuminates some of the key moments in the flag’s history — including ones of special interest to collectors — with examples from his own collection.

Although it shares a color scheme with Great Britain’s Union Jack, Bridgman points out, the U.S. flag used stars to symbolize the “new constellation” of its 13 colonies, adopting one of the classic symbols of heraldry.

Most of us grew up hearing the tale of patriotic seamstress Betsy Ross, whose redbrick house in the Old City section of Philadelphia is still a popular tourist attraction. According to the story, Ross was hired to design the flag and, while meeting with Founding Fathers George Washington, Robert Morris and George Ross (her husband’s uncle), had the idea of arranging the 13 five-pointed stars representing the colonies in a circle on the blue field. Bridgman notes that this narrative gained traction when Ross’s grandson shared it with the Historical Society of Pennsylvania in an 1870 letter, though he didn’t describe exactly how the stars were arrayed.

In 1892, the artist Charles Weisgerber created a large painting of the meeting that showed the stars arranged in a perfect circle, thus helping to popularize the design, also known as the wreath pattern. A few years later, Weisgerber actually moved into the Betsy Ross house on Arch Street with his family, turning it into an attraction and inviting visitors into the room where Ross supposedly sewed the flag.

According to Bridgman, “Ten-cent memberships were sold to fund renovations, and donors received a small calendar, to which a printed-cotton 13-star flag in the Betsy Ross design was affixed. In the same year, Betsy’s granddaughter Rachel Albright began sewing little flags in the same style in Independence Hall, selling them to tourists and spreading the word.”

Hard as it is to believe, little evidence exists that the Ross pattern was very widespread during the colonial era or early Federal period. In fact, according to the Smithsonian Institution, neither the flag’s proportions nor the distribution of the stars was regulated until President Taft’s Executive Order of June 24, 1912, which mandated that the stars be arranged in six horizontal rows, eight to a row, with a single point of each directed upward.

Did Americans fly the Betsy Ross flag in the late 18th and early 19th centuries? Probably not. “For reasons both practical and patriotic, 13-star flags have been made throughout American history, from at least 1777 to the present,” Bridgman explains. “But surprisingly, while a few early illustrations exist that include flags with 13 stars in a single wreath, actual flags in this pattern are all but unknown prior to the later 1890s, when the Ross story took hold.” In other words, Betsy Ross flags are often antiques, but they’re antiques from the Gilded Age rather than the Revolutionary War era.

In 1959, Hawaii and Alaska joined the union, and the flag has remained the same ever since. But up until 1912, designs varied. Many of them display a wonderful sense of pattern and play that evokes folk art, as exemplified by the one pictured above, which dates to between the 1876 Centennial and the early 20th century.

Another flag in Bridgman’s collection, with 13 stars in a 3-2-3-2-3 pattern, was made at the Brooklyn Navy Yard in 1906. Even as the number of states expanded, the Navy continued to fly 13-star flags, especially after the end of the Civil War. Woodrow Wilson ended the practice in a 1916 executive order.

Several aspects of the evolving design of the U.S. flag hold particular significance for collectors. Some, according to Bridgman, seek out versions with personal meanings, such as a flag from the year when a particular state was added, to celebrate where they were born or where they went to school. A flag with 34 stars, for example, recognizes Kansas statehood, while one with 36 stars commemorates Nevada’s addition to the union.

Other collectors are attracted to flags recording events of national import. Those wishing to commemorate Juneteenth (June 19, 1865) often seek out flags with 35 or 36 stars, “either of which,” Bridgman explains, “could be seen flying in America when General Ulysses S. Grant sent 2,000 Union troops to Galveston, Texas, under the direction of Major General Gordon Granger, who issued U.S. Army General Order No. 3 to the assembled crowd, freeing all remaining enslaved people in the state.”

The history of the U.S. flag demonstrates not only how the design has changed to accommodate additional stars representing new states but how different versions have resonated with people as notions of national unity have been strained and strengthened over time.

The evolution of the patterns did not follow a straight line and has been the subject of mythology and folklore. Studying how the flag has changed — and how it has remained the same — offers a fascinating glimpse into the evolution of our ideas about nationhood as well. 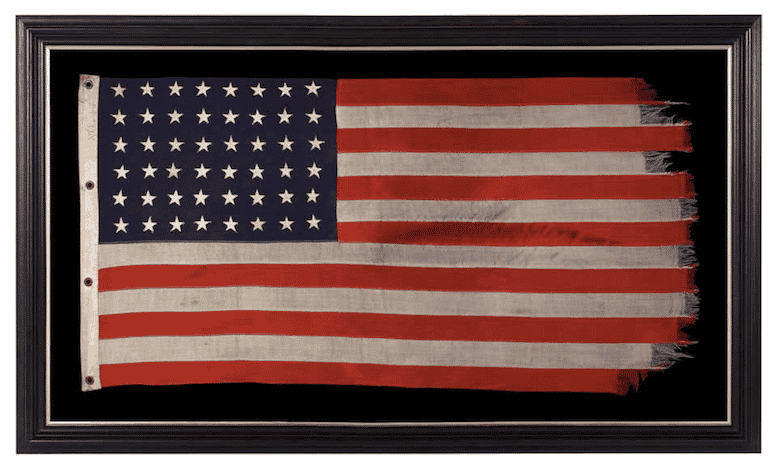