We asked Anja Rubik, Waris Ahluwalia and Anne Pasternak what they're collecting, which city is the new art world capital and who is the best dinner guest to sit next to.
Pin
Share
Tweet
Email 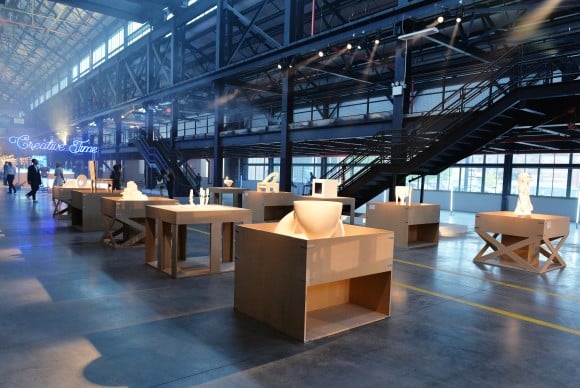 The all-white collection of 1stdibs items at the 2016 Creative Time spring gala. The pieces were hand-selected by honoree Craig Robins.

Last night the art world congregated for Creative Time’s annual Spring Gala, sponsored in part by 1stdibs, and honoring Craig Robins, the co-founder of Design Miami/. Given that Creative Time’s mission is to support public works of art (past projects have included installing a massive Kara Walker sculpture in the Domino Sugar Factory and an immersive space odyssey experience created by Tom Sachs) it’s no surprise that the party itself felt like a kind of art installation. Guests — who included the likes of Neville Wakefield, Waris Ahluwalia and Jeffrey Deitch — were greeted with a curated selection of all-white furniture and art objects from 1stdibs, all hand-selected by Robins.

In keeping with the theme, we asked a few guests what kind of art they collect, their most memorable art party experience and what they think the art capital of the art world is right now. Given that the event took place in the soon to be opened Mast Brothers factory in the Brooklyn Navy Yard, there was a lot of love for Brooklyn in the house. 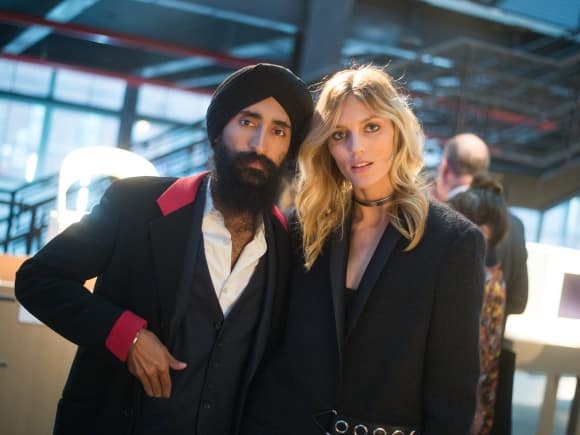 If you could take home one of the objects from 1stdibs, which would it be?

“I actually have a Jeff Zimmerman, but in black. I haven’t taken it out of its box yet, it just feels so fragile. You really wouldn’t believe how light it is though by looking at. It looks so heavy, but it’s just so light.”

I’m not at the level of a lot of other people, but I do love to collect art from Poland where I am from. There are a lot of talented artists from Poland. Seriously, go visit. 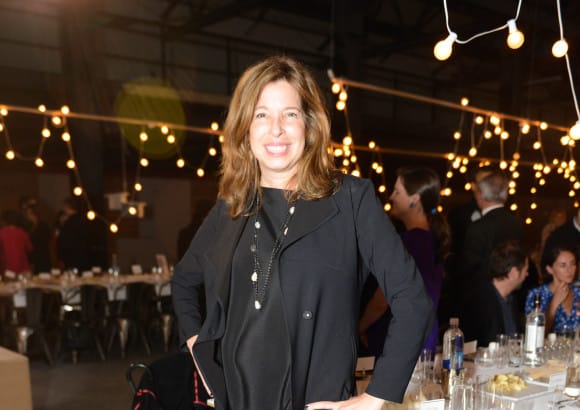 You used to be the director of Creative Time, what projects that you worked on really stand out?

Well I think the tribute the night after 9/11 was extraordinary, Waiting for Godot in New Orleans, Kara Walker Sugar Baby in the Domino Sugar Factory. It doesn’t get better.

When it comes to art: Brooklyn or Manhattan?

It’s like the center of gravitation has left Manhattan, and Brooklyn is in the house, and ruling the party. If anyone wants to argue with me about that they can give me a call.

Whose your favorite person to sit next to at a gala dinner?

Oh I can’t say that! Do you know how many people I would offend if didn’t pick them? It’s just too hard!

You’ve lived around the world, what do you think the art capital of the world is at the moment?

What are your favorite kind of parties?

I love to do an anti-chic, fashion week dinner that is super laid back. We [along with husband Alexandre de Betak] have been renovating our place for a few years, so it makes it extra casual because it’s kind of a mess. It’s fun for everyone to just relax, eat good food, and enjoy the company.

Yes, we actually collect lots and lots of art every day because we have four children, so every day the house is filled with new work. We have a Karl Lagerfeld sketch next to something from our daughter [in our home]. It’s fun. And we have a Jeff Koons balloon dog in our kitchen. It was a baby shower gift, and it’s bright and wonderful to look at in the morning. That’s a good one.

I do collect art, and it’s a very eclectic collection. My favorite works that I have are a lithograph by Cézanne and a couple of lithographs by Picasso. And a drawing by Diego Rivera. But then I find weird things at flea markets and antique shows, and have my son’s and daughter’s works framed, and those are included in the collection too. And my husband is an artist and a painter, so there is just work all over the place. We should have probably just called our daughter Art.

Are women allowed to wear flats to black tie events?

Im wearing my Docksides since I’m at the Navy Yard, so I’m allowed. Especially on a day like this when you want it to be warm but it’s cold, you just want to fall back on something cozy and easy. It’s easier to have fun when your comfortable. And anything goes in Brooklyn. 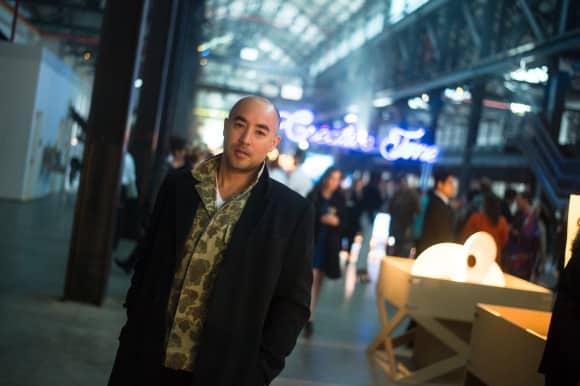 What’s your most prized possession?

When I was a kid I bought a little drawing from a guy called Basquiat. I just loved art, and I got a tiny bit of money as a gift and I called a friend of my parents because I knew that he collected art, and I said, ‘How do I go about buying something?’ And he said, ‘Well, I can get you in touch with a gallery.’ And I got this little drawing and my parents were super upset. They said, ‘What the hell are you doing, you are supposed to save this is for your future.’ But then it became a very good investment. 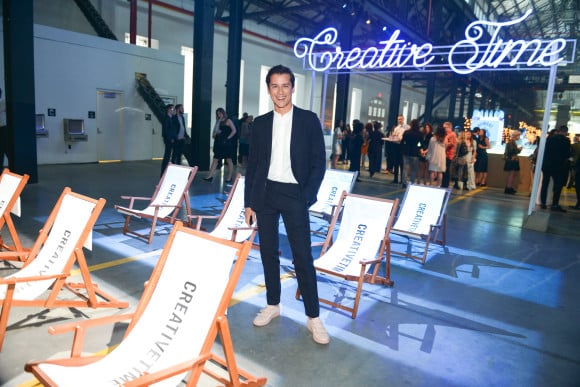 Luigi Tadini, Co-Founder of The Gathery

You’ve been to your fair share of art parties, which one stands out?

One that really stands out was this underground party that we [along with creative partner Nicky Balestrieri] went to in Amsterdam. We had gone to a very fancy dinner spot, and then after that we ended up at this underground party that unbeknownst to us was a finger painting party and people were actually finger painting each other. He didn’t want to go in because he was wearing Lanvin pants, but I said, ‘You know, we are here, let’s get dirty.’ 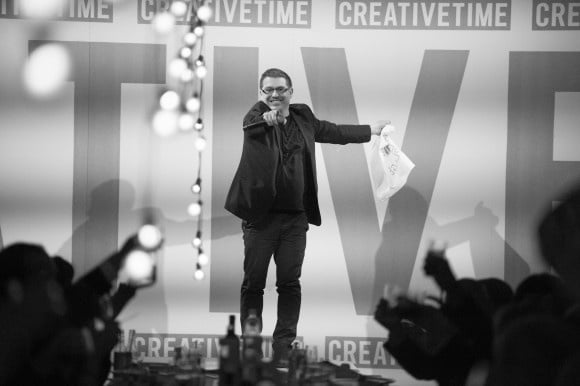 What Creative Time projects really stand out to you?

It’s kind of like picking between your children, but it was like two years after Katrina and it was a project called Waiting for Godot. Part of it was a play with Wendell Pierce from The Wire, and it was set in the Ninth Ward. It was just a really powerful experience.

In your wildest dreams, what project is next?

We did a project in outer space, it doesn’t get much crazier than that! You know, what I’ve always wanted to do is something on the Gyre, that place where all of the plastic from the world ends up in the ocean, and it’s like this massive landmass of plastic. I’ve wanted to do a project around that, something around the environment, and this just mysterious plastic landmass.

Who is your favorite person to sit next to at a dinner party?