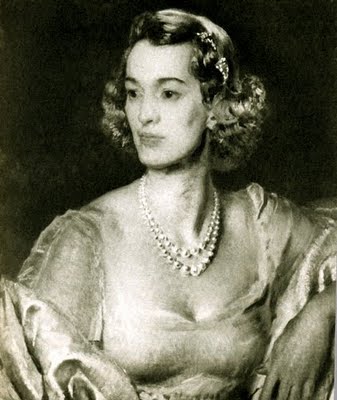 Sister Parish (1910-1994) was the last of America’s grand dame decorators — and arguably, she was the greatest of them all. After all, Parish originated the American Country look, one of the most enduring decorative styles of the last half-century. While the look —with its mix of good English and French furniture, along with painted chairs and tables, overstuffed sofas with lush chintz slipcovers, and walls adorned with paintings of dogs and botanical prints — borrowed much from the English Country House style developed by Nancy Lancaster and Colefax and Fowler, she made it her own through her penchant for homey hooked and needlepoint rugs, patchwork quilts, showy painted floors and baskets galore, all arranged in a way that was artful yet unstudied. Parish’s rooms had warmth and character, as well as a sense of permanence. Even if they had been assembled the previous day, the furnishings and objects looked as if they had been accrued over generations. Most surprising, these traditional interiors never dated, but seemed timeless. As she once observed, “Innovation is often the ability to reach into the past and bring back what is good, what is beautiful, what is useful, what is lasting.” 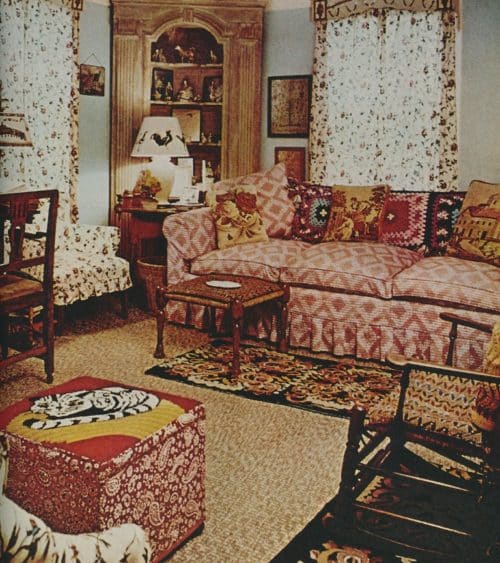 A Sister Parish-designed home in Maine.

She was christened Dorothy May Kinnicutt, but soon got the nickname “Sister” from her three-year old brother. If this was a misfortune — her husband complained mightily about being married to a woman he called “Sister” — it was one of the few that befell her, as her life from the start was one of extraordinary privilege and pedigree. Her father, a prosperous stock broker, could trace his ancestry back to the fiery Puritan preacher Cotton Mather. Her mother was descended from one of the signers of the Declaration of Independence. In her day, such Yankee ancestry was itself a social calling card. Her family maintained homes in Manhattan, the New Jersey hunt country, Maine and Paris. After she made her debut and spent a “season” in Paris, she met Henry Parish, a Harvard man and young stock broker at the same firm as her father, at a dinner given by her family at their Far Hills, New Jersey home. The couple married soon after; Sister was 19. After they settled in an old white farmhouse, not far from her parents, Parish’s exceptionally stylish nest-making skills came to the fore. A young wife on a budget, she made draperies out of white mattress ticking; covered the walls in a white striped paper; and painted the bedroom floor cherry-red with white diamonds. Captivated by the charming home she’d concocted all on her own, her friends began asking for advice on their own homes. 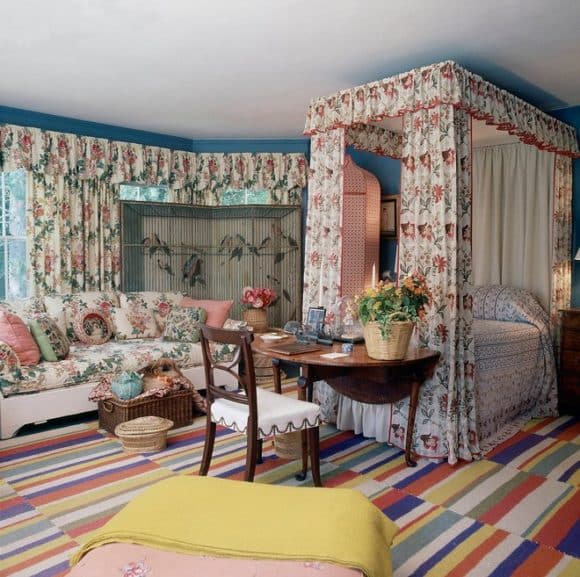 What had begun as a delightful diversion turned into a career several years after the stock market crash, which forced her husband and father to take big pay cuts. Determined that her children should grow up with all the things she had had when young, Parish who, by her own account, had “never opened a window or poured a glass of water for herself,” decided to make a professional go of decorating. She rented a 14-by-14 foot office in town, equipped it with a desk and wicker chair and hung out a shingle: Budget Decorating. Which is exactly what it was back then. Catering to the socially prominent, who suddenly found themselves financially squeezed, she came up with stylish ways to better arrange the antiques they already possessed and inexpensive strategies to freshen their homes. Such a display of drive and invention did nothing to calm the distress of one of Henry’s aunts at the notion of a relation, and a woman, no less, going in to trade. So scandalized was she that the aunt disinherited him in favor of another relative she considered more respectable — Eleanor Roosevelt! 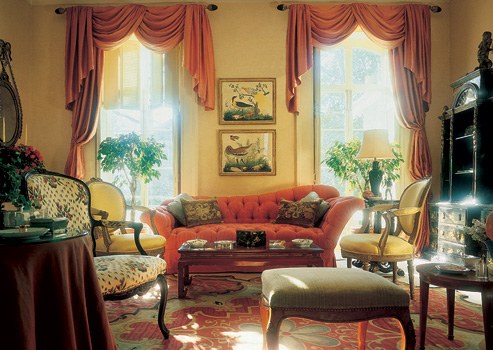 This charming room brims with beautiful and expensive furnishings, but is arranged in a casual and inviting way, making for the relaxed entertaining which Parish’s clients so highly prized.

If Parish’s aunt considered Sister going to work déclassé, there were other pillars of society with last names like Astor, Mellon, Vanderbilt and Whitney, who in the years to come were only too thrilled to have one of their own decorate their homes. Because no matter how wealthy or socially esteemed her client or socially esteemed, Parish always behaved like the patrician she was. She was well-mannered, but never servile. If anything, some of her clients were afraid of her. She could be imperious and caustic. At the start of a decorating project, and sometimes years after it was completed, she would arrive at their home and take the client’s tea cart — in those days everyone of a certain social standing had at least one — and go from room to room packing it with all of the decorative objects that didn’t pass muster.

The decorating grand dames who had preceded her — Elsie de Wolfe, Dorothy Draper, who was a cousin on her mother’s side, and Frances Elkins — all courted publicity and sought to monetize their talents through newspaper columns and books on decorating. Not Parish. She remained true to her breeding and did little to advertise her talents in the early days. In truth, she didn’t have to. The many commissions she received were lucrative enough to keep her small firm humming. 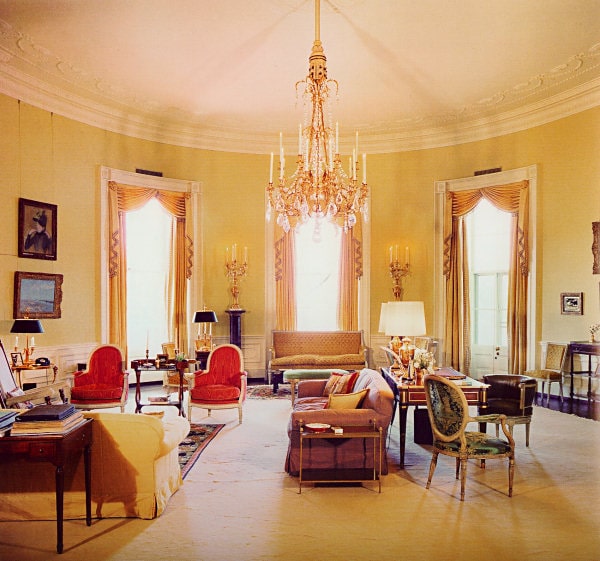 The yellow Oval Room in the Sister Parish-decorated White House.

Her public profile was raised considerably when Jackie Kennedy, for whom she had decorated a Georgetown townhouse when she was a senator’s wife, asked her to take charge of the family quarters at the White House. Electing an Irish Catholic to the presidency had been a major issue during the campaign, so news of Parish’s assignment caused one newspaper editor to assume it was sign of the Vatican’s impending influence as the paper published the headline: ”Kennedys Pick Nun to Decorate White House.”

The high-profile assignment was not a happy one. Legend has it that Parish was eventually fired for telling a five-year-old Caroline to take her feet off the upholstery. But rumor has it that Parish told friends that Jackie Kennedy did not feel it necessary to pay all of her decorating bills. Apparently, she considered the honor of a White House commission — and the consequent publicity — compensation enough. Proud American that Parish was, she was also a self-respecting capitalist! If bills were not paid, no work. Interestingly, many years later, a newly married Duchess of York asked Parish to decorate her new residence, but when Buckingham Palace got word of Parish’s high fees, the commission was cancelled. 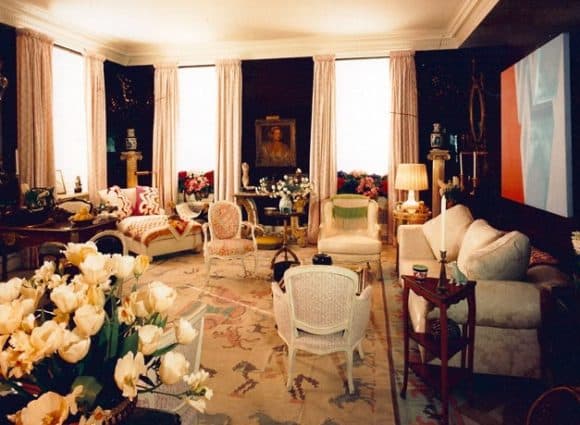 A Sister Parish and Albert Hadley collaboration from the 1970s.

Nevertheless, the publicity Parish received for the ill-fated White House project definitely widened the appeal of her American Country look. By this time, she was so busy and her commissions had grown so complex that she hired Albert Hadley, a native of Nashville, Tennesse who had worked at McMillen and trained at Parsons, to handle all the architectural design work: drawing floorplans, refining flawed architectural envelopes, sketching curtain treatments. Two years later, she made him a partner, changing the firm’s then name from “Mrs. Henry Parish II, Interiors” to the now fabled “Parish-Hadley.” Hadley brought architectural knowledge to the practice and an academic understanding of the field. It was he who in the decades to come managed the projects behind the scenes and oversaw the work of the junior decorators as the firm grew and grew in size.

The caliber of the clients and the quality of the finished work attracted the crème de la crème of aspiring young decorators and designers. Among the soon-to-be decorating stars who passed through Parish-Hadley’s doors were Mark Hampton, Bunny Williams, David Easton, Mariette Hines Gomez, David Kleinberg, Thomas Jayne and Brian McCarthy. Through the work of her firm and those who apprenticed there, Parish continues to influence American notions of taste and style to this day. That is a legacy.