We take you on a walkthrough of the first-ever London edition of the showhouse, where 25 noted interior designers go for the gusto.
by Elizabeth Fullerton
Pin
Share
Tweet
Email 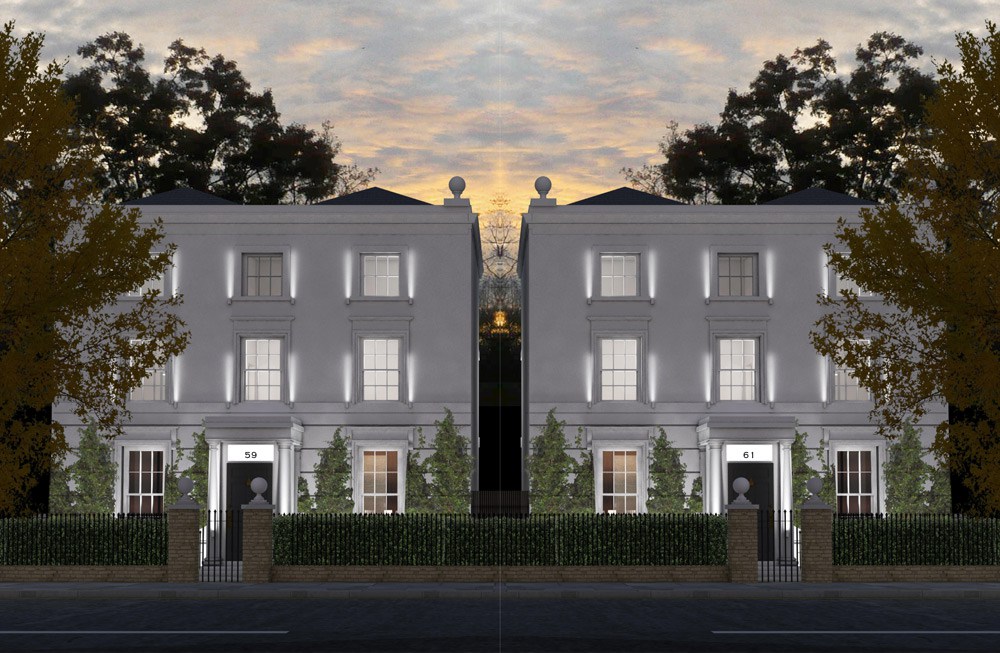 A lovelorn Englishman’s study, a rock star’s den, a tropical beach paradise and Out of Africa on horseback. These are just a few of the concepts dreamed up by designers for London’s first-ever Holiday House to celebrate the 10-year anniversary of the project in aid of the Breast Cancer Research Foundation. This year, Iris Dankner, who founded Holiday House in New York before expanding to the Hamptons, and cochairs Rachel Laxer and Joyce Mizrahi have invited a host of European and American designers to bring their distinctive visions to life in 25 rooms across two London townhouses, which are on sale for $30.5 million each.

Ingenuity is in abundance in both showhouses — from Hazel Collins’s transformation of a hallway coat closet into an Art Deco cocktail bar to Simone Suss’s funky bedroom for a teenage girl. The latter is a riot of pink fluffiness complete with an “Oh la la” pink neon wall sculpture by Bag & Bones and a Tracey Emin fabric work. 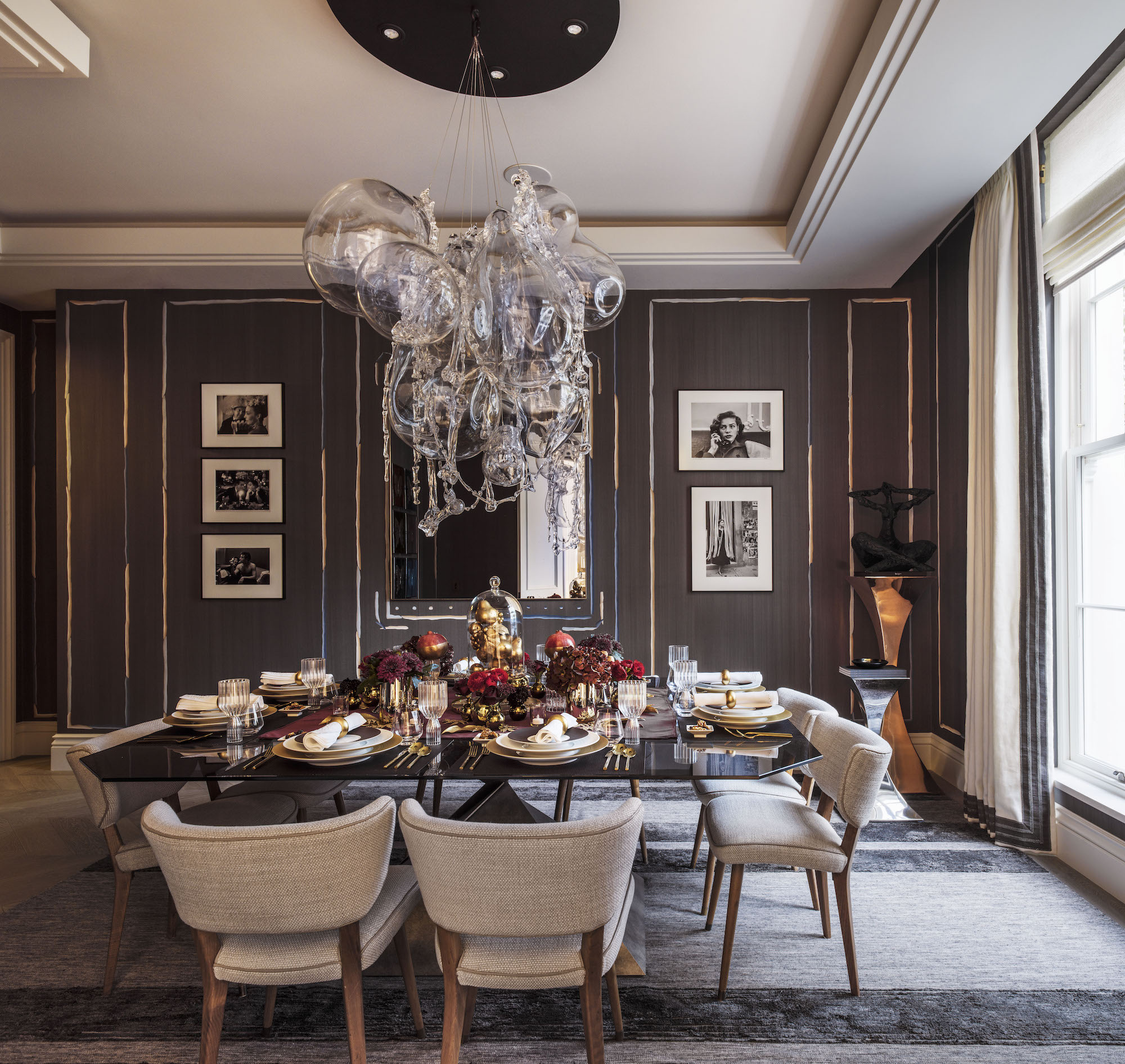 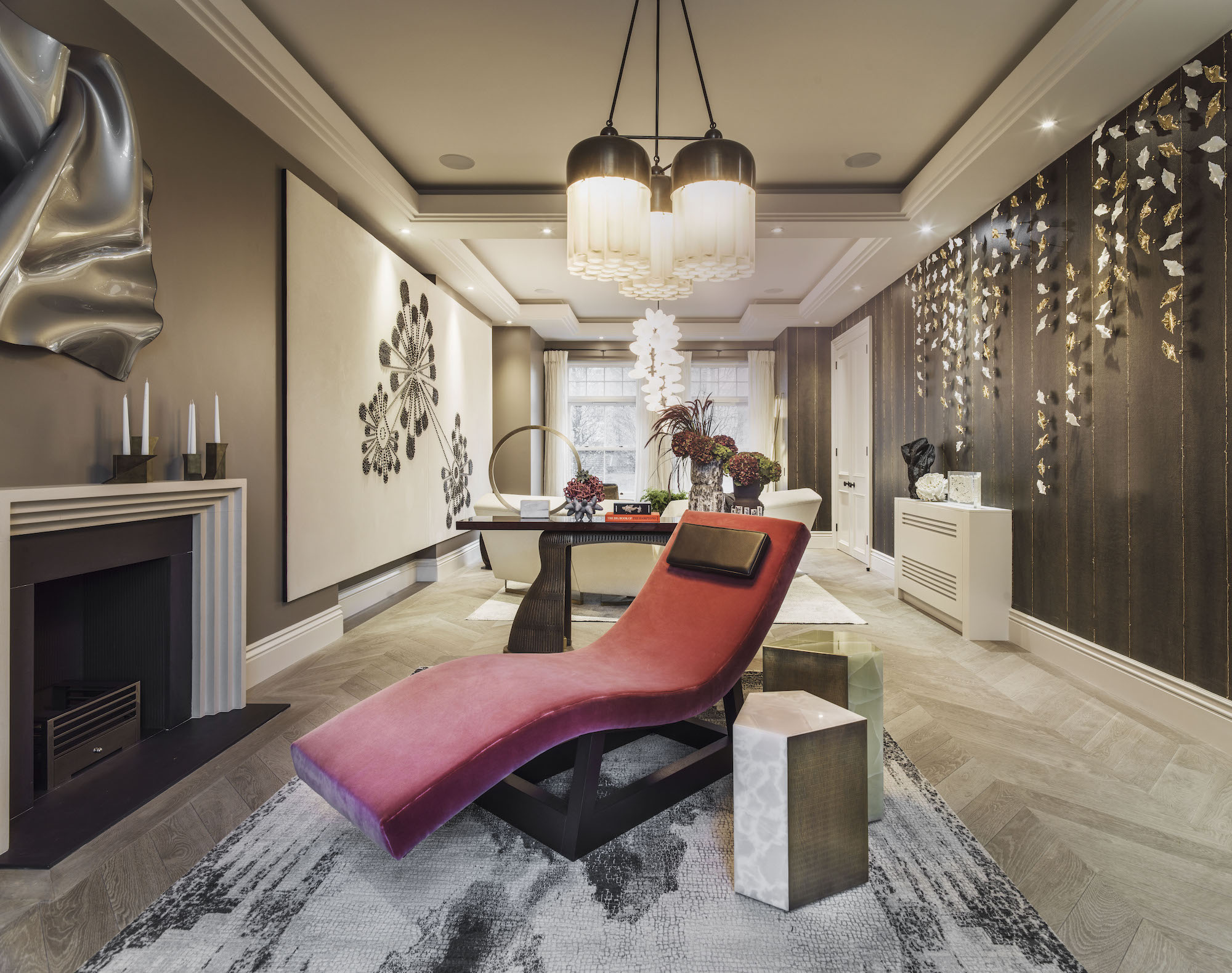 Across the hall, Fiona Barrett-Campbell has turned the living room into “a feast for the senses,” as she puts it, where organic natural forms combine with a Roman influence. Cascading 14-karat gold luster and pallid bone-china leaves by Haberdashery dominate one wall. And Lindsey Adelman’s Kingdom Arch chandelier (in the background), recalling the succulent burro’s tail plant, mirrors the graceful curve of the Antibes chaise upholstered in de Le Cuona Vienna Flamenco. Here, one can recline beside a pair of Roman-inspired Solis onyx and brass side tables and admire the dramatic Hadrian limestone and bronze console based on Roman jewelry, part of the FBC London collection. 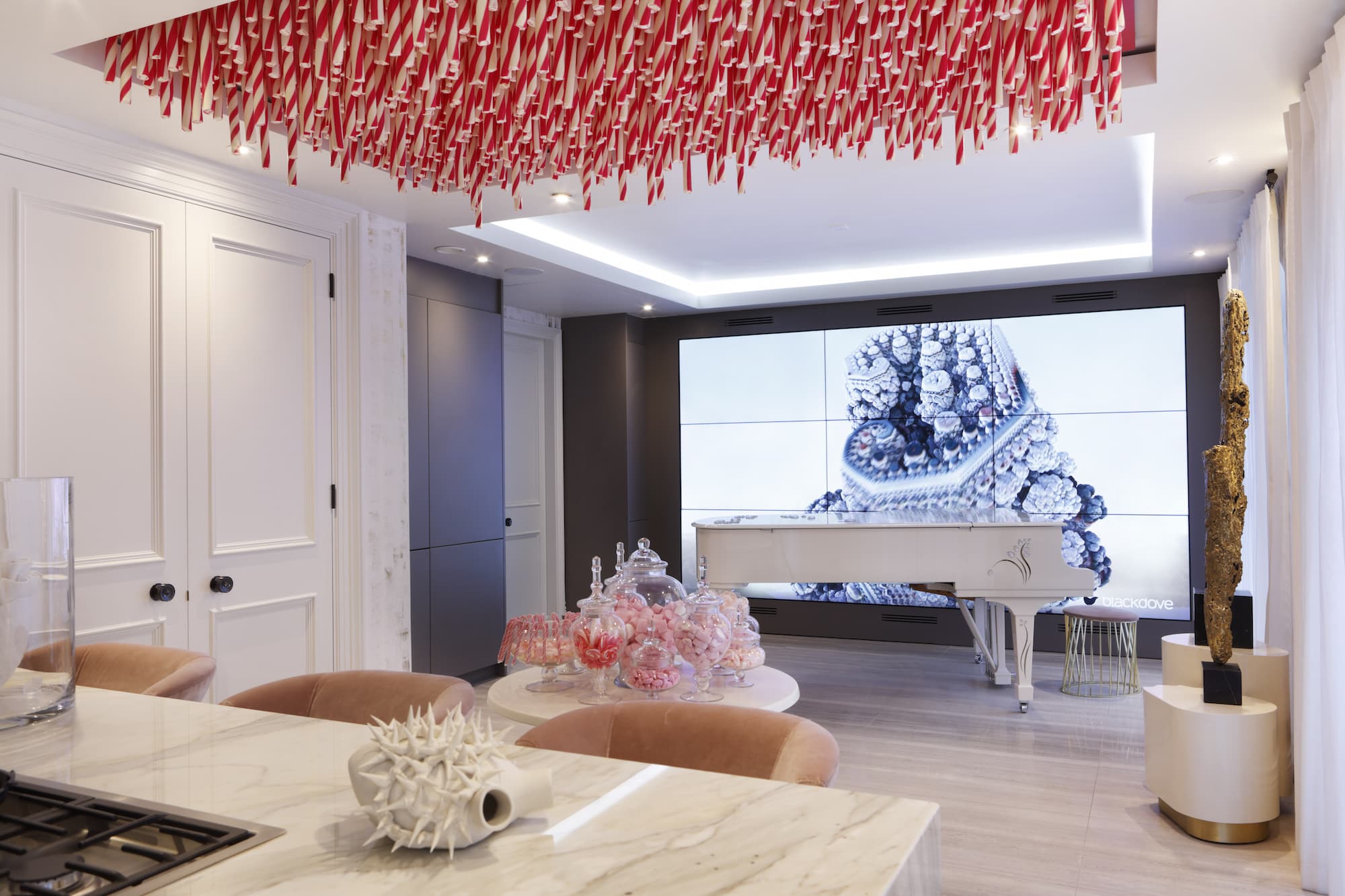 Downstairs, Carnaby Street meets Liberace in Susan White’s flamboyant kitchen and media room, whose highlights include a gem-encrusted white grand piano, a fuchsia feather wall by Tracy Kendall and a bespoke Iggi candy-cane ceiling sculpture. “My interiors are quite quirky. I like having a 3-D look, I like the movement and shadowing,” White explains. 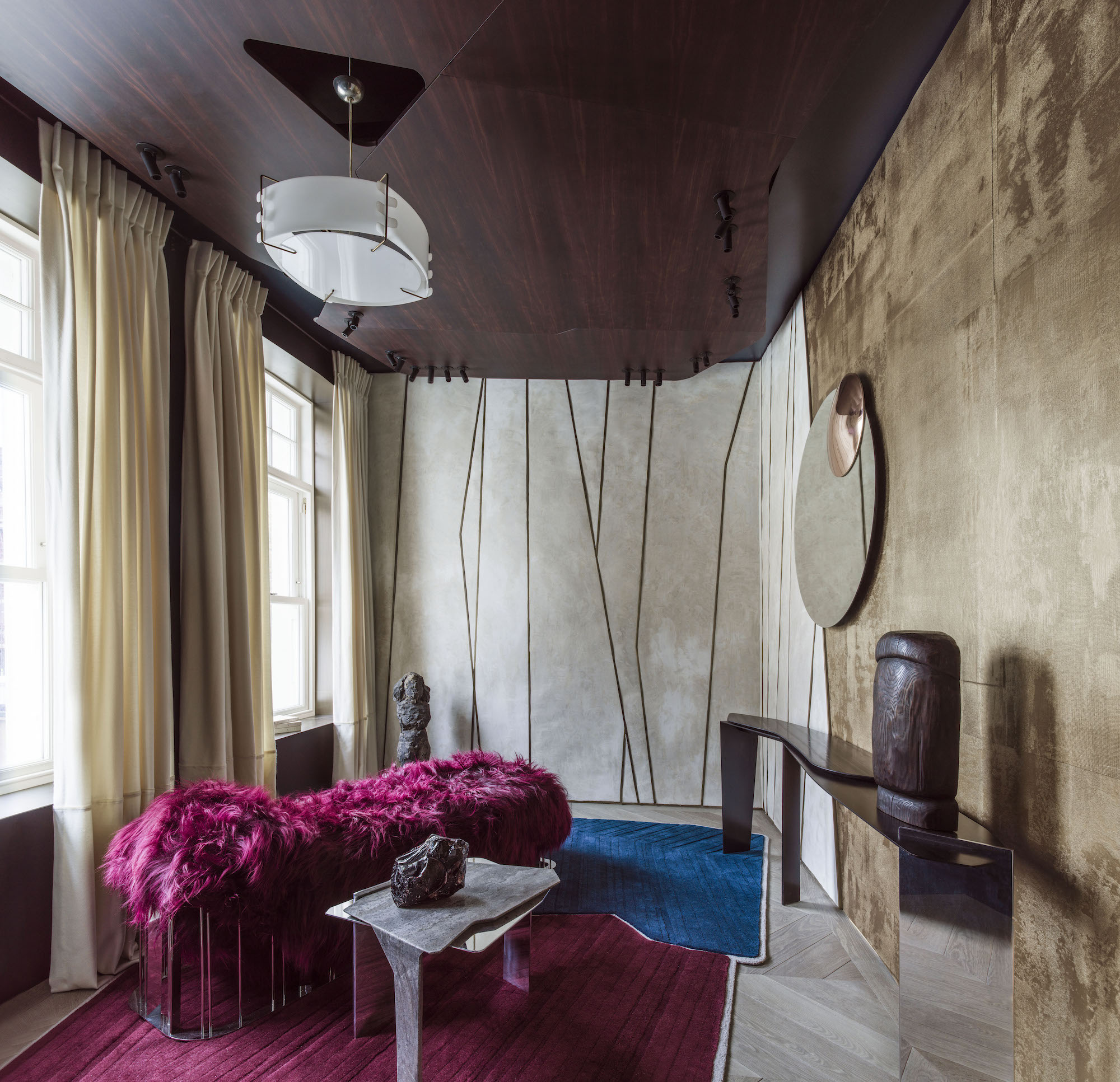 Tucked away at the back of the house, a study designed by the Invisible Collection in partnership with architects Bismut & Bismut invites one on “an inner journey.” This refined space is home to a striking feature wall with cream plaster panelling inlaid with copper, whose clean lines and dual tones are echoed in the travertine and stainless steel-pedestal table and contrast beautifully with the red luxuriance of the Mongolian lamb Very Hairy sofa, both created by Michel and Daniel Bismut for the Invisible Collection. 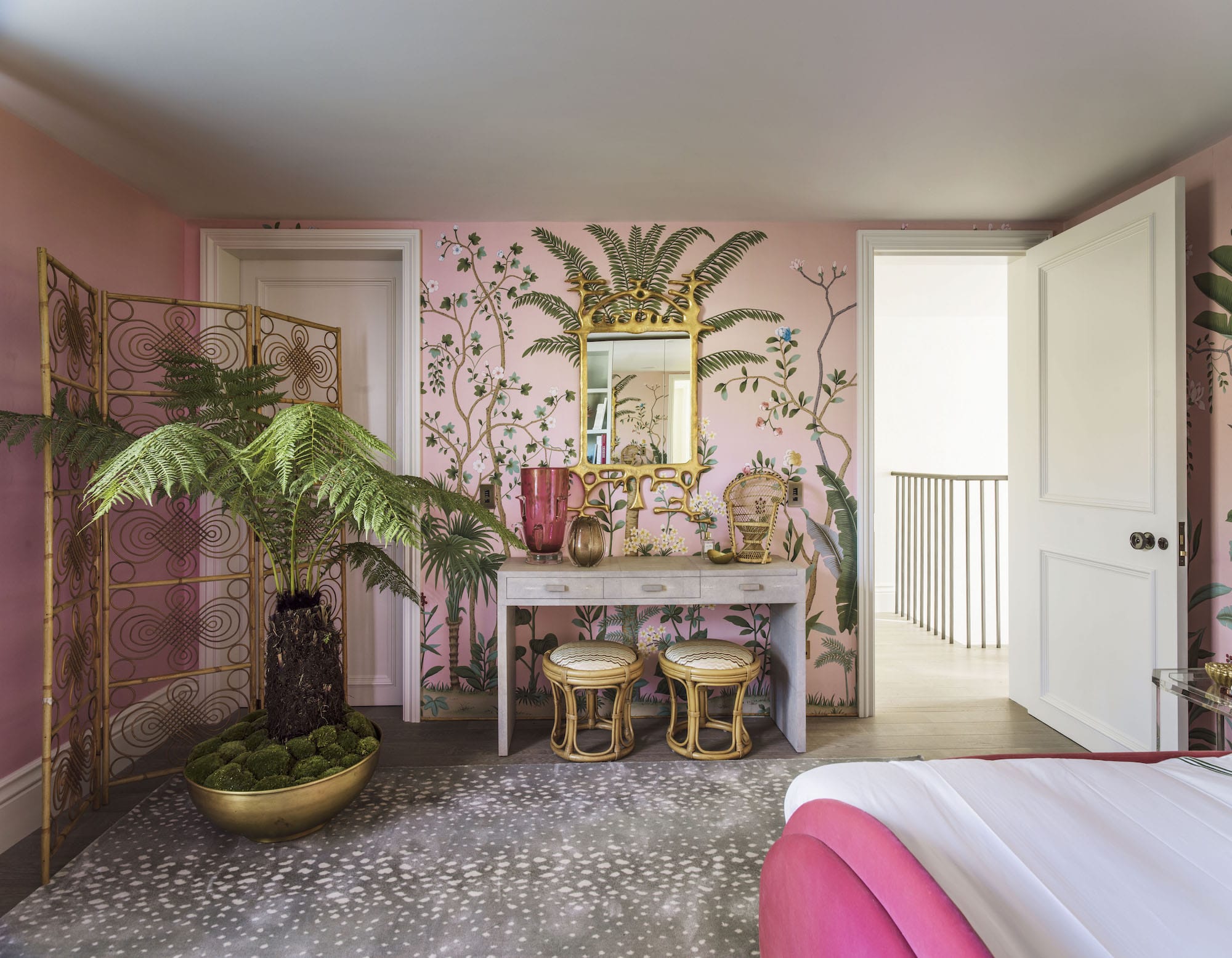 Upstairs, Amelia Carter’s bedroom plunges visitors into an exotic jungle fantasy with a Stark antelope print carpet, De Gournay’s Amazonia wallpaper that teams with monkeys and parrots and a Sheba mirror in gold from Arteriors in a nod to Chippendale and Matisse. 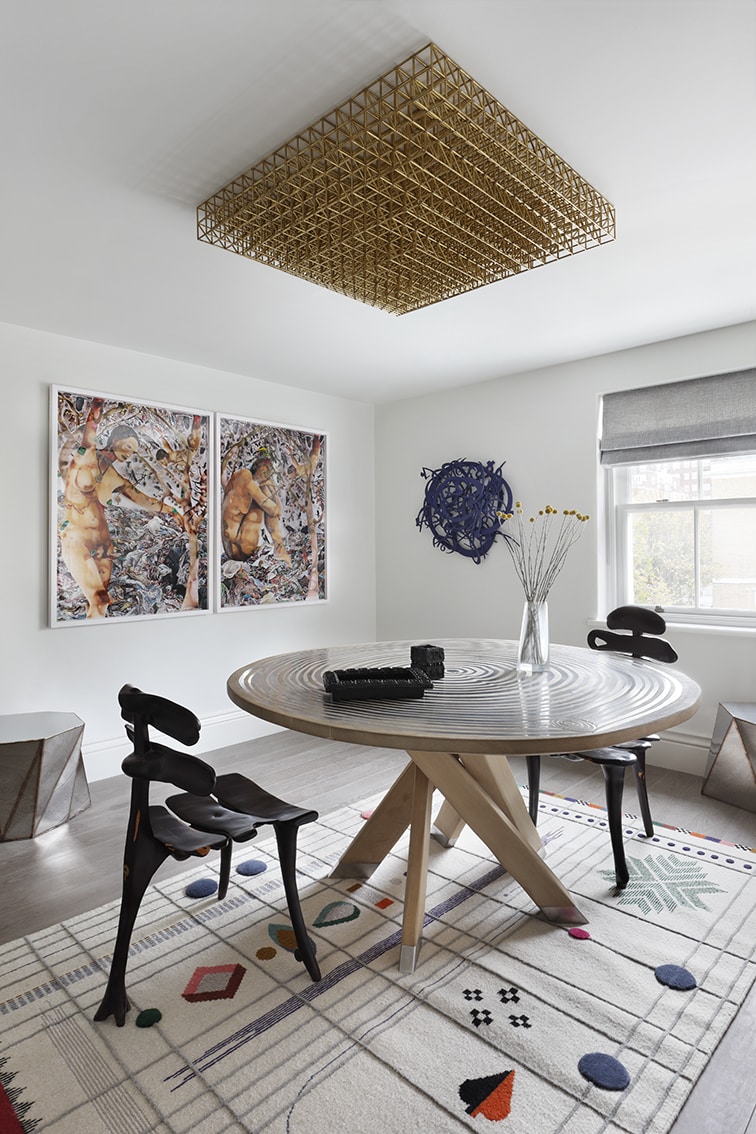 Nearby, Catherine Weinstock’s room is a crossroads of diverse cultures called the Think Tank. African hardwood Vertebrae chairs, designed by Babacar Niang, are placed around a mesmerizing Francesco Perini circular oak and steel table, beside an exuberant Shanty sideboard in corrugated metal, designed by Doshi Levien for BD Barcelona; Pakistani artworks adorn the walls and an Indian rug lines the floor. “I’m interested in the connections between all cultures and ethnicities,” Weinstock says. “People are going to reflect on this sense of peace and harmony when they come in here.” 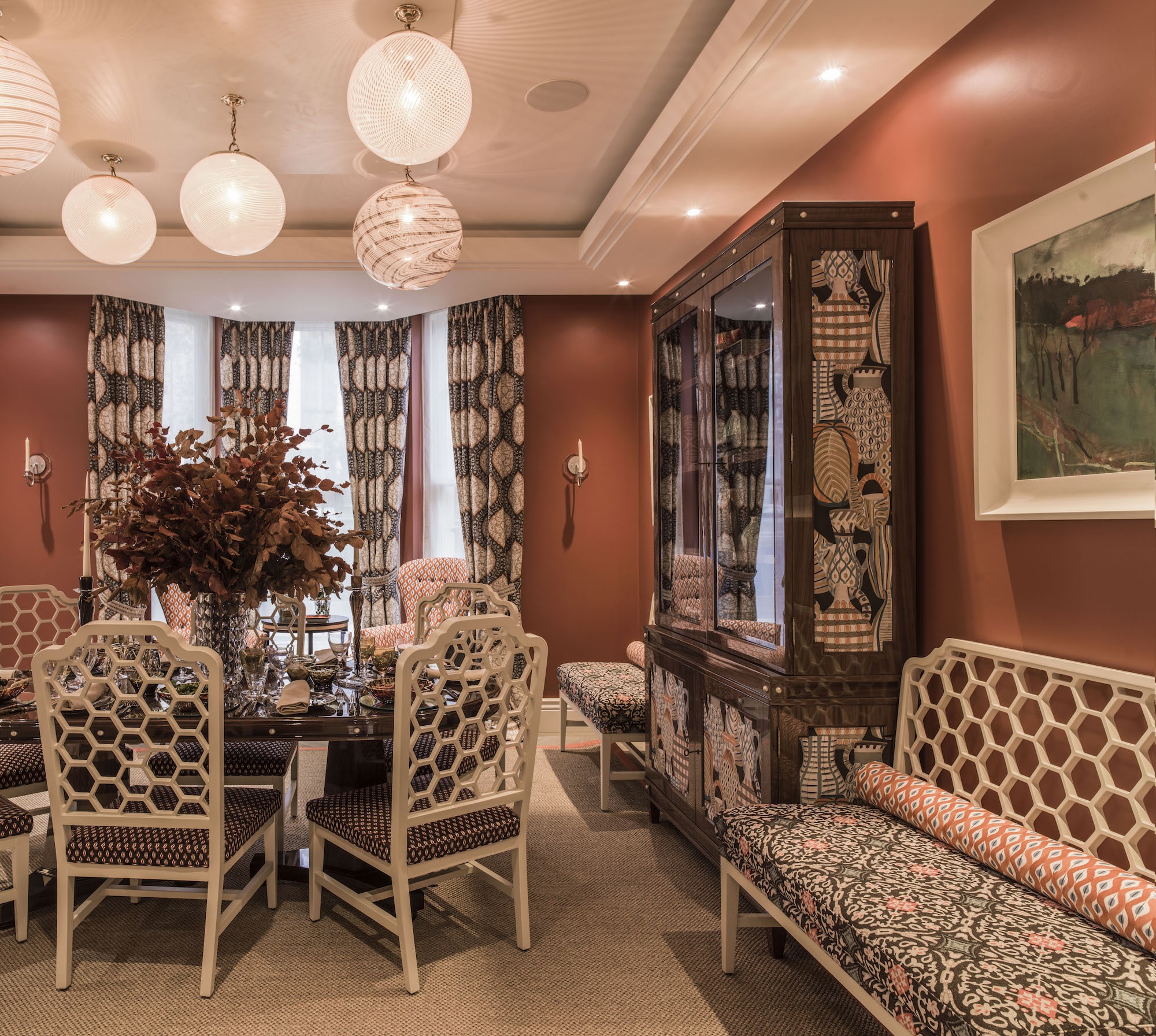 In the neighboring house, 59 Hamilton Terrace, Nina Campbell and collaborator Justin Van Breda have packed an autumnal punch, decking out their dining room in Campbell’s Les Rêves fabric. Orange and brown patterns dominate, a standout being a Collioure fabric-paneled, high-gloss walnut cabinet with Gilver details, lined with Poole Pottery works. The 1950s Murano hand-blown globe lights match the room perfectly, but as Van Breda says, “There’s no hero piece. Everything sings together. The room itself is the creation.” 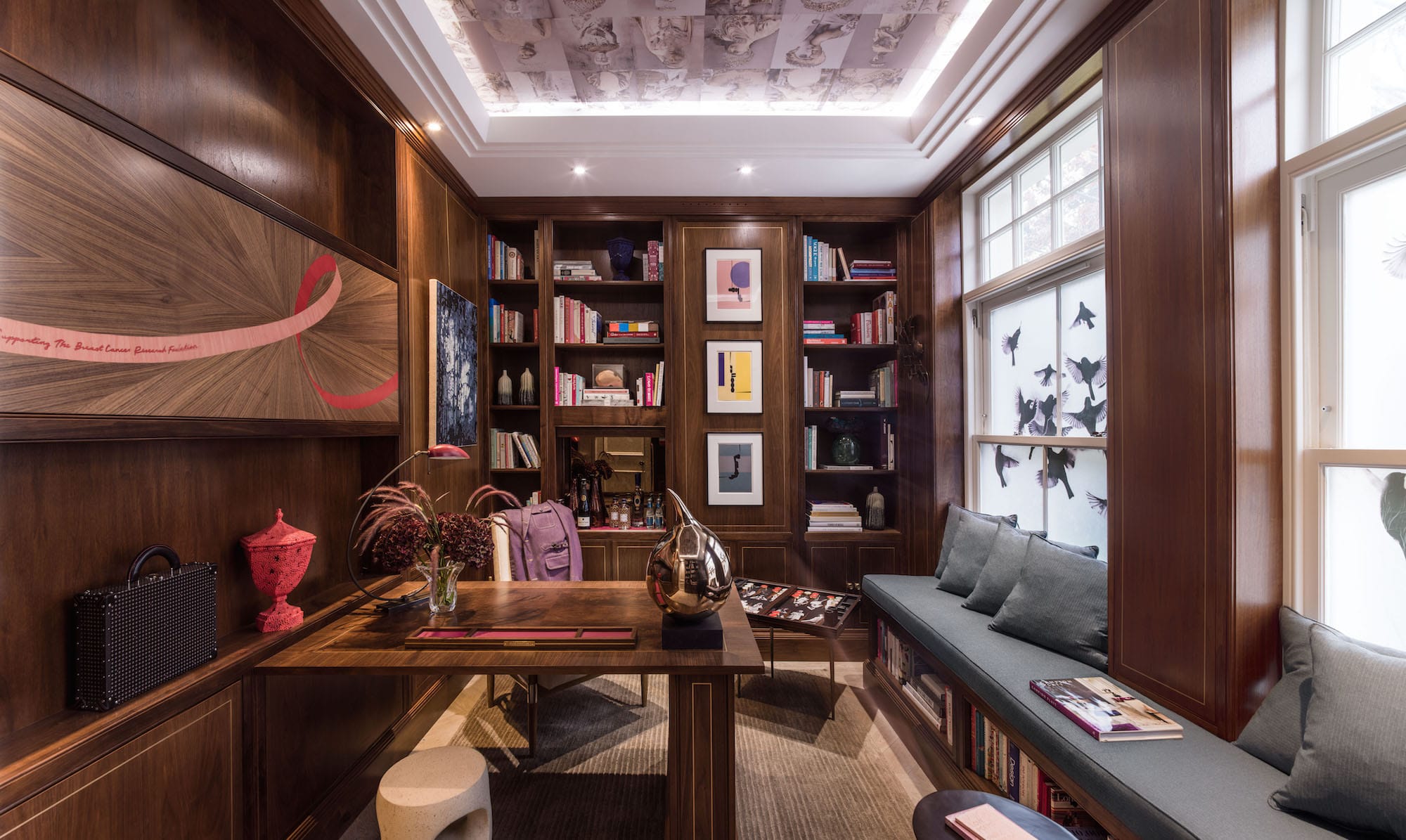 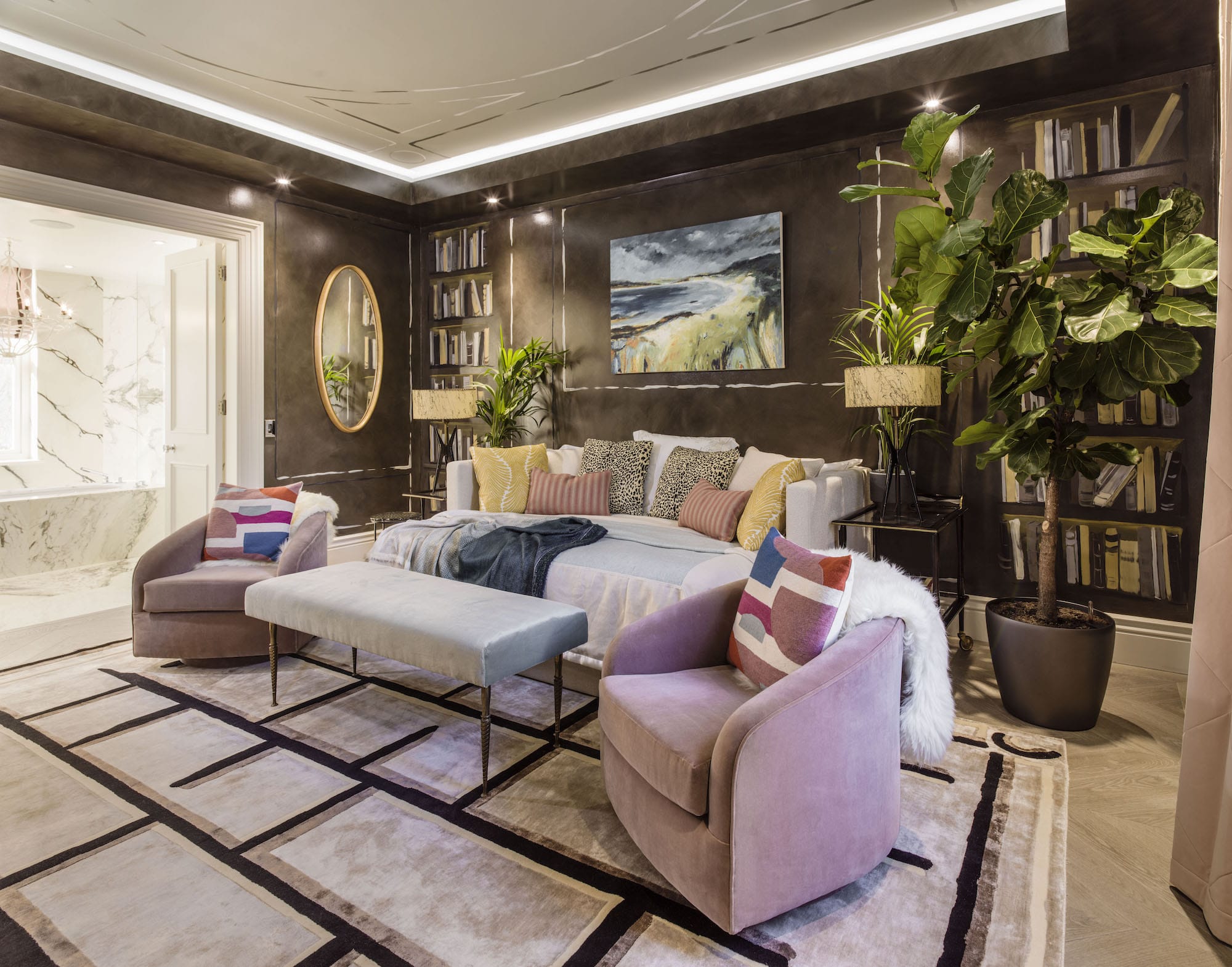 Upstairs, Studio QD and Nicky Haslam have jointly created a salon-boudoir for a woman to entertain in intimate elegance. The ceiling and walls, painted to look like ribbons, were inspired by Christian Bernard, while trompe l’oeil bookcases — all by the Finished Effect — pay homage to interiors illustrator Jeremiah Goodman, who passed away this year. The cream Silk Avenue “painterly paving” rug offsets the walls and ceiling, while the attractive Talisman drinks trolleys and oval mirrors and Tatiana Tafur zigzag parchment sideboard lend conviviality to the space. 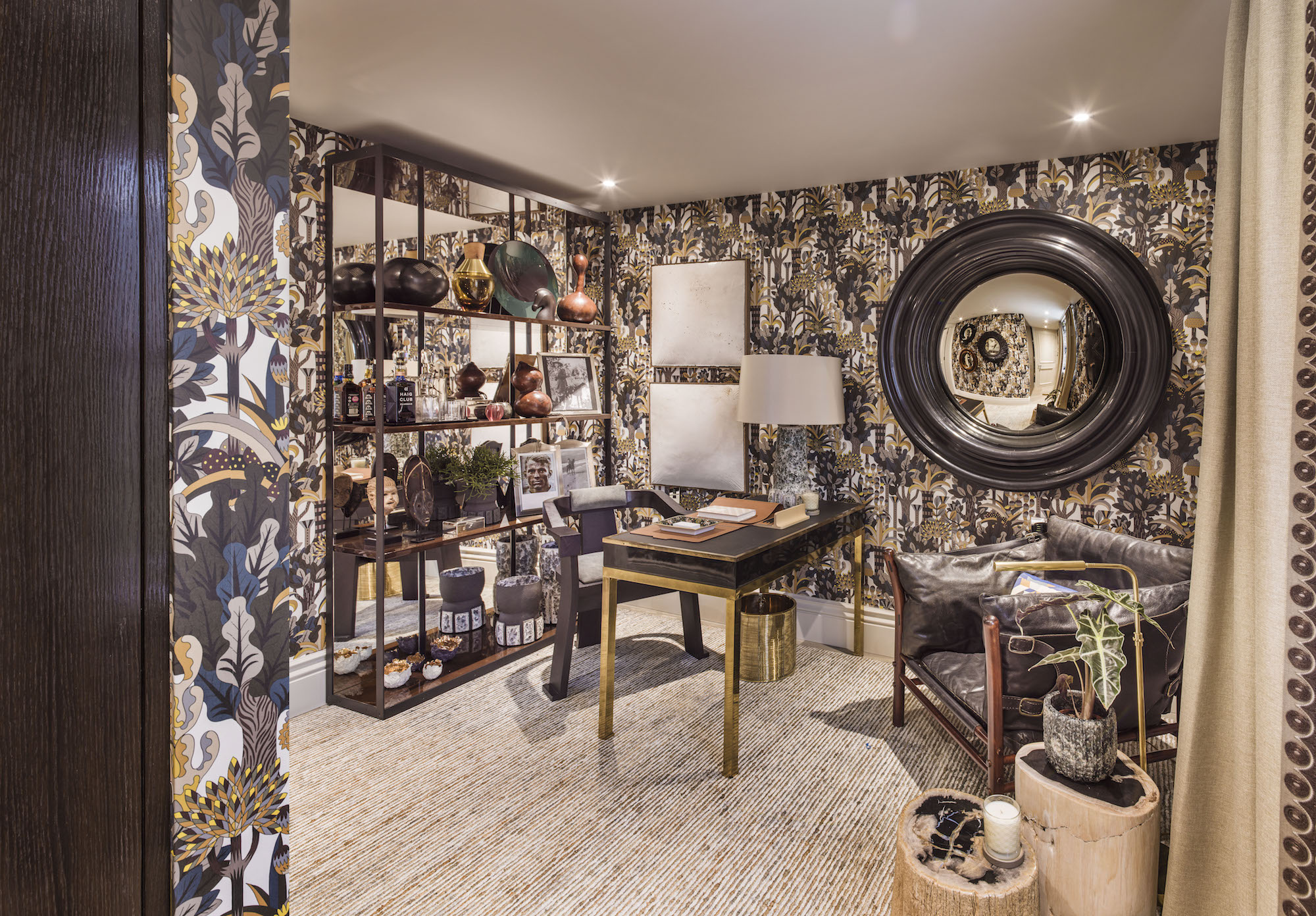 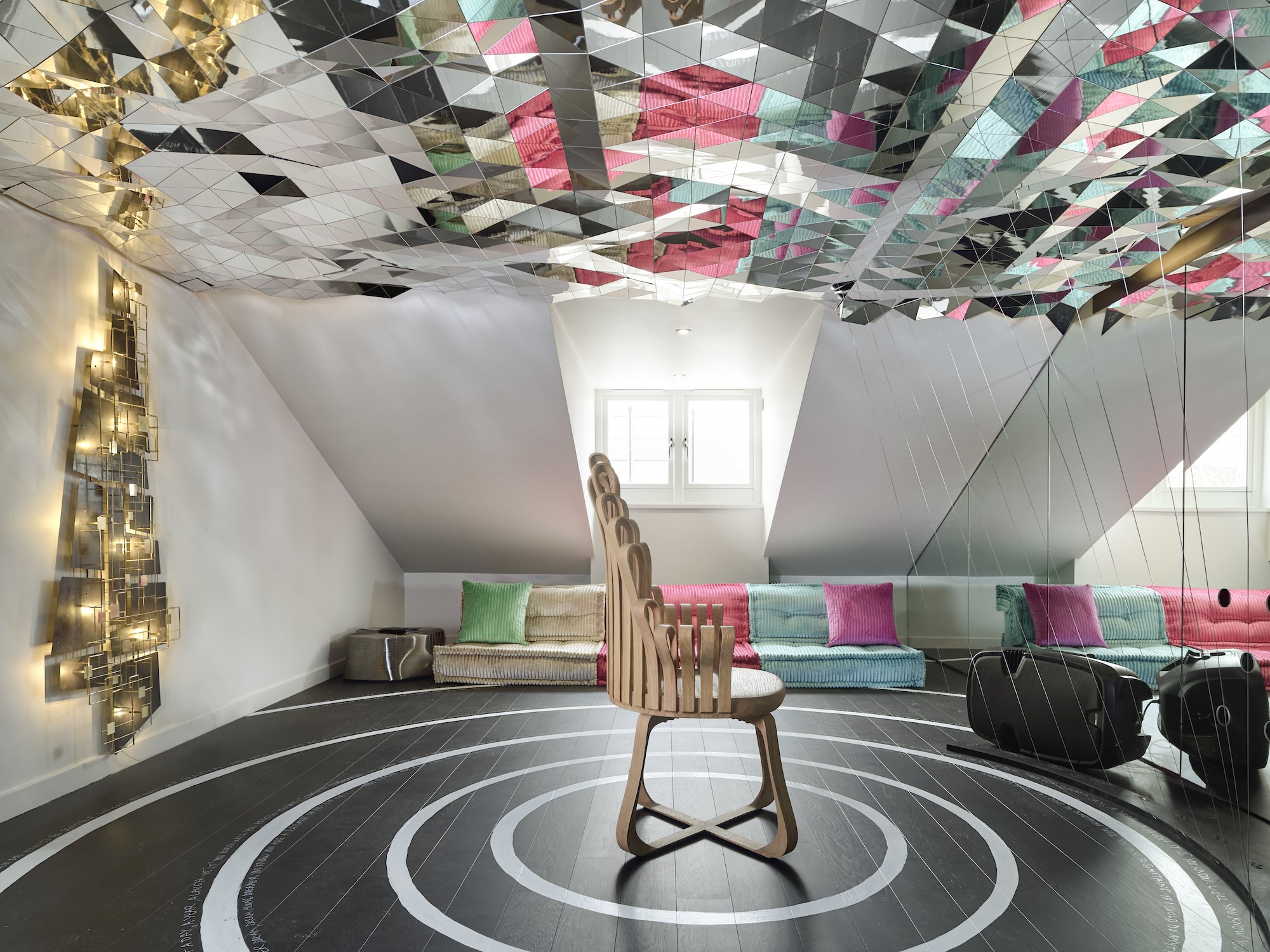 At the top of the house, Philippe Maidenberg concocted a fabulous Dreamer’s Lounge dedicated to Supertramp frontman Roger Hodgson. “The sky is just above, so we had to make something where he could write a song, just close the door and dream,” says the French architect and designer. From the black-and-white ripple-effect floor to the rainbow-colored iconic Roche Bobois Mah Jong sofa and origami mirror ceiling by Woodskin, this is a room that can free the imagination.