One part athletic conference, one part luxury brand, the Ivy League is comprised of eight East Coast universities with enormous endowments and minuscule admissions rates. It also has a distinctive aesthetic imprint that conjures up images of stone-clad buildings surrounding leafy quadrangles. In hopes of completing a seasonally appropriate — is there a more beautiful time of year than autumn in the American Northeast? — survey at collegiate architecture, we took a closer look at a standout building from each of the Ivy campuses. Read on for more. 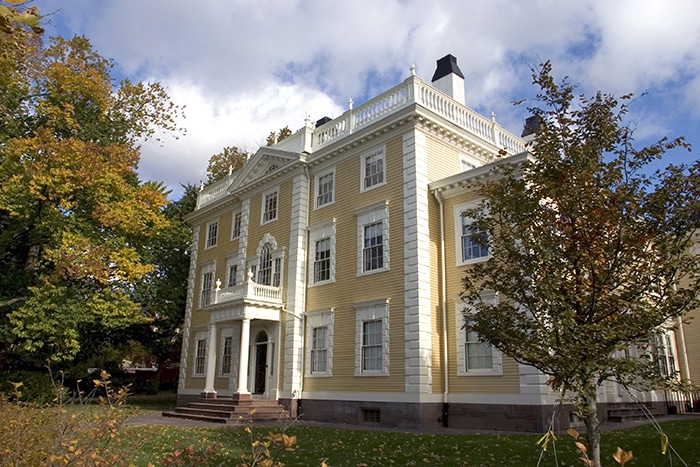 This grand home in Providence, Rhode Island’s College Hill neighborhood essentially grew up with the University — it housed five generations of the Brown family, for whom the school is named. The Nightingale-Brown House was designed by Caleb Ormsbee in 1792, not long after Brown University was founded in 1764. The Georgian-style wooden structure is one of the largest wooden buildings from the 18th-century still standing, and now houses Brown’s Center for Public Humanities and Cultural Heritage. 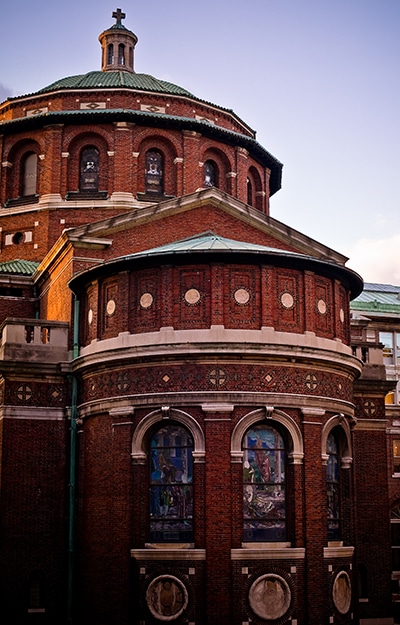 Over a century old, this 91-foot-tall Episcopal church was designed by architect I.N. Phelps Stokes at the behest of his aunts, Olivia Egleston Phelps Stokes and Caroline Phelps Stokes, who very generously funded their nephew’s venture. Notably, it was the first structure on the Columbia University campus to not be designed by the architecture firm of McKim, Mead & White. The red brick and limestone exterior is built in the Northern Italian Renaissance Revival style, and each of the 24 stained glass windows in the church’s dome are dedicated to a specific family associated with the university. The building has also played host to more secular passions: in 1969, Simon and Garfunkel recorded portions of their song “The Boxer” there. 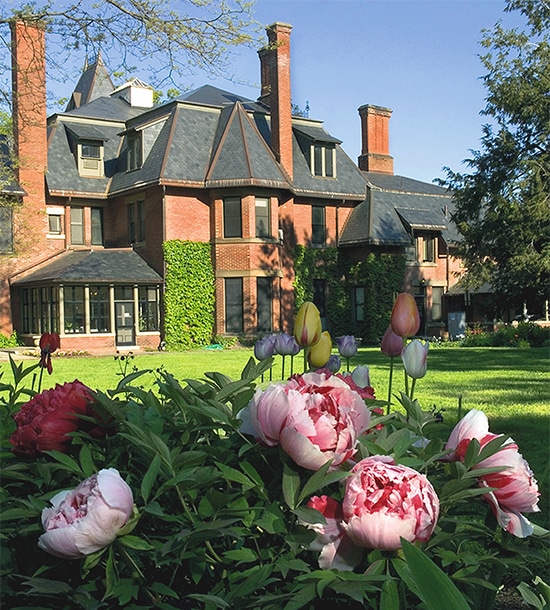 This stately mansion on Cornell’s Ithaca, New York campus was originally built as the home of Andrew Dickson White, the university’s co-founder and first president; White commissioned architects William Henry Miller and Charles Babcock to design the Second Empire-style structure in 1871. The colorful educator would frequently use the home’s central balcony — featuring an ornate balustrade — as a soapbox from which to address students. After White bequeathed the home to Cornell, it was used as an art museum in the mid-20th-century, before being considered for demolition in the 1970s. A prescient conservationist, Henry Guerlac, successfully fought to save the building, and the home’s library is now named the Guerlac Room. 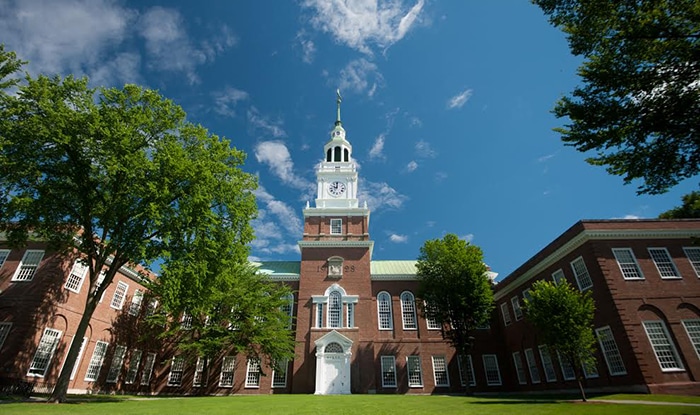 If you’ve ever received a Dartmouth postcard or brochure, you’ve likely seen the school’s iconic Baker-Berry Library. You may not have realized, however, that parts of it are relatively new: it was not completed until 2002. The original structure was known as the Fisher Ames Baker Memorial Library, and opened in 1928 after being designed by Jens Frederick Larson, who modeled it after Philly’s Independence Hall (see the resemblance?). In the 1990s, multiple donor gifts allowed for expansion of the library. The final complex, designed by Venturi, Scott Brown and Associates and Shepley Bullfinch, was renamed to reflect a generous donation from the Berry family. In addition to housing over two million books, Baker-Berry is also home to José Clemente Orozco’s fresco, “The Epic of American Civilization,” a national historic landmark — make sure to venture down to the basement reading room to view this stunning mural. 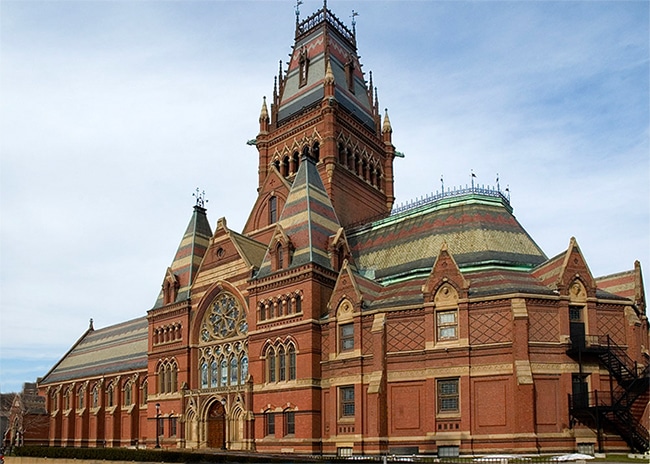 This High Victorian Gothic structure, created as a memorial to Harvard lives lost during the Civil War, was designed in 1865 by alumni William Robert Ware and Henry Van Brunt. The brick and stained glass building is split into three primary sections: Annenberg Hall, Memorial Transept and Sanders Theater (the last of which has played host to the likes of Martin Luther King, Jr. and Winston Churchill). Memorial Hall was intended to be used for formal occasions, but was almost immediately adopted by students for day-to-day dining. 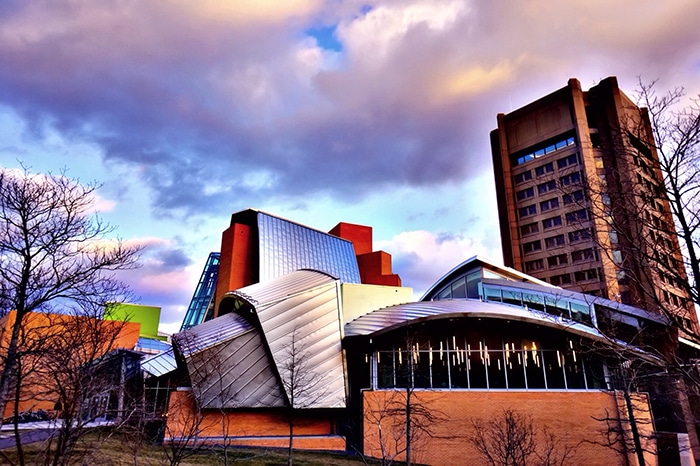 Lewis Library is, both chronologically and architecturally, the most modern structure on our list. Designed by famed architect Frank Gehry in his highly recognizable angular-meets-undulating style, this 2008 aluminum and glass building is home to Princeton’s science research facilities. Gehry hoped that his design would inspire students, saying, “Scientists who are focused on complex issues may find that the abstract landscape of the building will stimulate their imagination and perhaps lead them to thinking outside the box.” 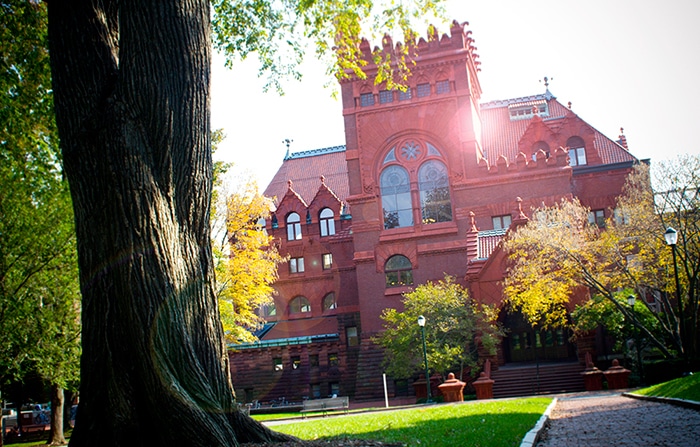 Castle-like in its appearance, the University of Pennsylvania’s Fisher Fine Arts Library was designed by Victorian architect Frank Furness, well-known for his striking buildings throughout the Philadelphia area. The red sandstone and terra cotta structure was completed in 1891, and previously served as the university’s main library before becoming home specifically to art history and architecture volumes. Surprisingly enough, this National Historic Landmark didn’t always receive the appreciation we now give it — Furness’ Venetian Gothic style was considered passé by the end of the 19th-century, and the possibility of demolishing the building was floated in the 1960s. But architecture fate intervened. A young teacher at the university, Denise Scott Brown, led efforts to preserve the library, and another fledgling professor, Robert Venturi, introduced himself to say that he was impressed with her campaign. Of course, the two went on to form one of the most important life-work partnerships in 20th-century architecture history, and their firm, Venturi, Scott Brown and Associates, is the very same one that worked on Dartmouth’s Baker-Berry Library.

Photo by Scott H. Spitzer courtesy of the University of Pennsylvania. 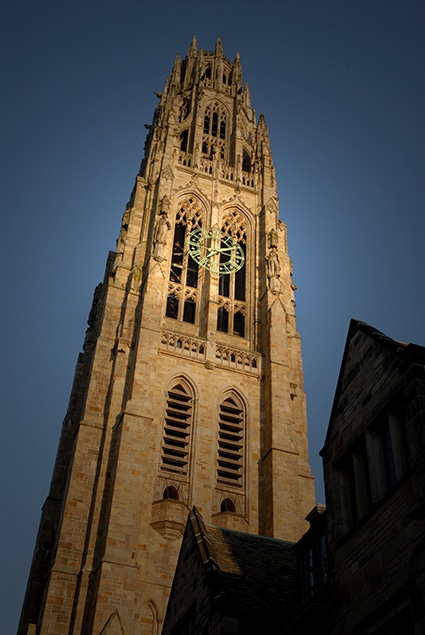 This majestic structure towers over Yale’s Memorial Quadrangle, both visually and sonically — Harkness is home to the school’s Yale Memorial Carillon, the bells of which student musicians play twice a day during the school year. When designing the Tower in 1917, architect James Gamble Rogers closely engaged with the history of the school. He even went so far as to give the structure a height of 216 feet, in order to represent each year passed between Yale’s founding and the construction of Harkness. Music isn’t the only art form present in Harkness. The Tower also features multiple statues and carvings representative of Yale figureheads, symbols and morals, which were overseen by famed early-2oth-century sculptor Lee Lawrie.