Jeffrey Milstein tells us how and why he chose to photograph these cleverly customized tiny houses.
by Trent Morse
Pin
Share
Tweet
Email 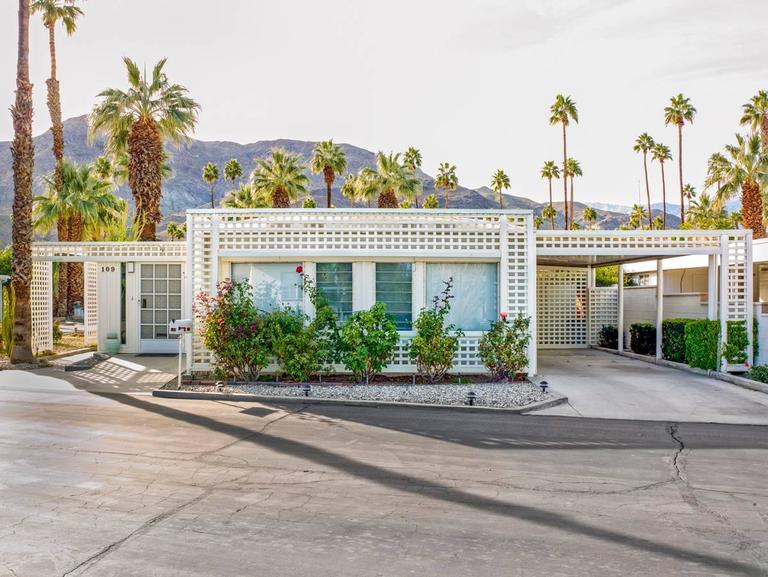 Before becoming a noted photographer, Jeffrey Milstein was an architect experimenting with diminutive dwellings. Back in the 1970s, he designed several plans for miniature homes that could be assembled almost anywhere, even in the middle of the woods. These inexpensive kit houses caused a small sensation in their day, appearing in Family Circus and Popular Science and foreshadowing the “tiny house” fad of today.

In recent years, Milstein, who’s known for his dazzling aerial shots, has returned to the subject of readymade residences, with his photographs of mid-century-era mobile homes in Palm Springs and Rancho Mirage, California. The images have been compiled in the book Small Dreams: 50 Palm Springs Trailer Homes (Schiffer) and are available through Kopeikin Gallery in Los Angeles. 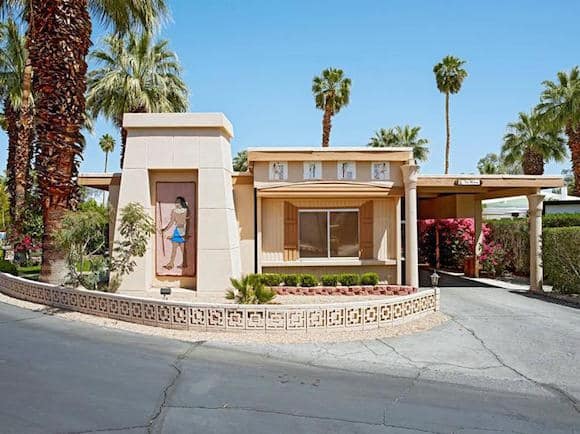 Milstein takes these architectural portraits from the same vantage point every time: straight on and out of context from the neighboring houses. By doing so, he highlights their structural sameness — a central trailer flanked by a carport and a covered patio — as well as the major differences that stem from modifications added by homeowners.

Many residents have enclosed their patios and carports to extend the width of the houses. They’ve also raised roofs, painted murals, added latticework, dug swimming pools and planted desert gardens of cacti and palms. There’s one quadruple-wide place with a Roman-style moat around it and another that resembles an ancient Egyptian temple.

Here, Milstein tells us all about his strangely alluring photos. 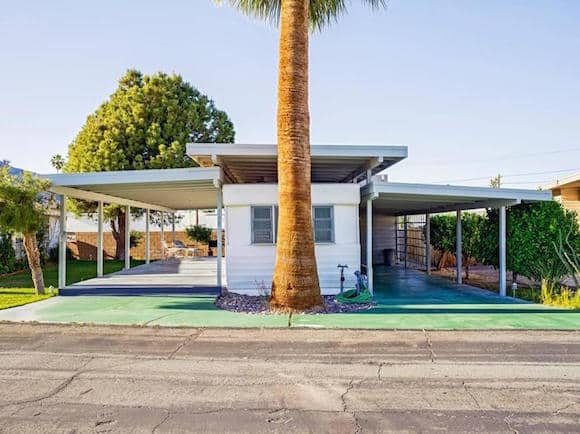 What attracted you to the trailer homes of Palm Springs and Rancho Mirage?

My background is art and architecture. I studied indigenous architecture at Berkeley in the ’60s, and in the ’70s the small-is-beautiful and do-it-yourself movements took hold. I was drawn to small, efficient design. In 1971, I designed a tiny, do-it-yourself, bolt-together vacation house. It was a project that Family Circle magazine purchased and published in 1972, selling plans for $2.50.

Trailer homes are small, efficient spaces, and many of the trailer homes I discovered in Palm Springs were remodeled with colorful owner-designed add-ons, facades and small decorative gardens. I felt like I had discovered this fairyland of wonderful indigenous designs.

The thing is, they all started out with a similar trailer or double trailer, and then over time they all take on a new life with the different changes by each owner. I wanted to document them in a similar way to the typologies of Bernd and Hilla Becher, whose work I was very fond of. 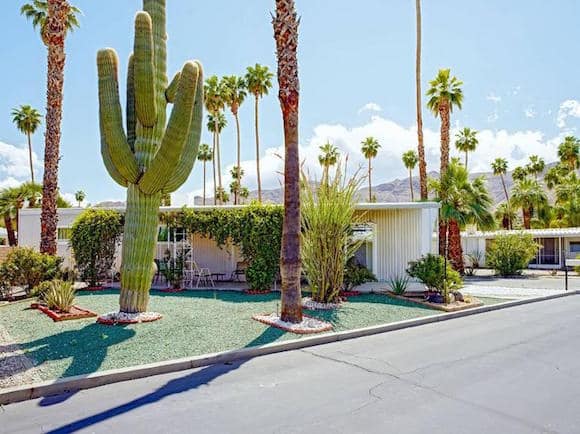 While I now reside in New York, I grew up in Los Angeles, and the first time I went to Palm Springs was on a spring break while in high school. Many years later, after I had taken up photography, I began visiting Palm Springs on family vacations.

Palm Springs is unique as a mecca of mid-century modern design, and I would drive around the city looking for exciting architecture to photograph. It was while driving around that I discovered several trailer parks with these unique trailers.

After doing some research, I learned about Blue Sky Trailer Park, which had a storied history being founded by movie stars like Bing Crosby and had some of the most fanciful trailers, like the Egyptian Temple and the Japanese Tea House. 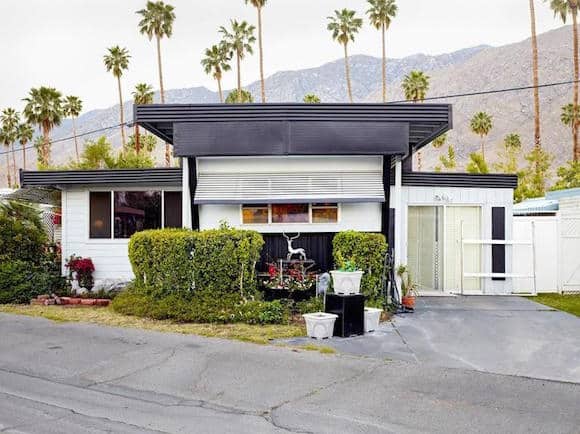 How do these photos relate to your aerial photographs and other series — compositionally, conceptually or otherwise?

If I look at this book and compare it to my other portfolios like the aircraft, cruise ships, black boxes and aerials, they have the common thread of straight-on views with flat perspectives and attention to frame and symmetry, and typological comparison.

What kind of equipment did you use to get the shots to be so uniform?

The photos were taken over a number of years while on visits to the West Coast, beginning in 2005. I used arguably the best digital camera at the time — a Contax 645 with a Phase One digital back and the legendary Zeiss Contax 45-90 zoom. I usually shot in the late afternoon, and the photos were processed in Capture One and Photoshop. 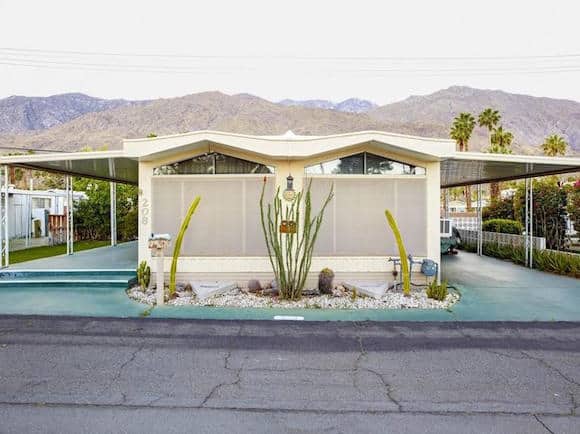 How do these trailers relate to mid-century design as a whole?

A lot has been written about the architecture that flourished in Palm Springs. Architects like Richard Neutra, Albert Frey and William Krisel teamed up with stylish clients from the entertainment industry and created the long, low, open plans filled with desert light. With the first architect-designed tract homes in the country, Palmer & Krisel brought these elements to the middle class.

Tell us about the customizations done by the homeowners.

The trailers have a mix of all kinds of design elements. Some leave the original trailer sticking out as a reminder of the humble beginning. Some have buried it behind a new facade. Some have taken their facade designs from international historical styles reminiscent of Epcot Center in Disney World. Some have taken the motifs of the mid-century look. But all reflect something of the owner-builder that makes it a personal statement about who they are. I think this is what gives them their unique charm. 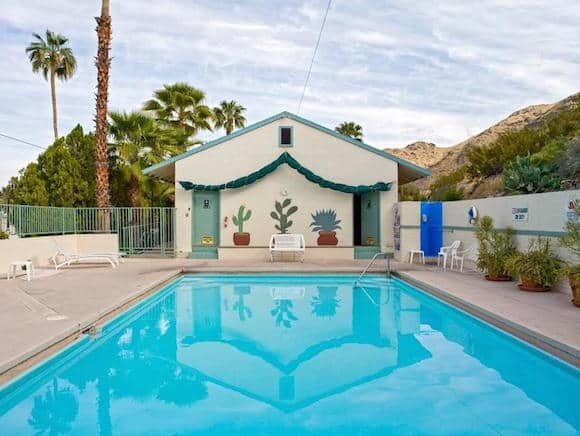 What’s next for you?

As a follow up, I would like to go back and do portraits of some of the trailer owners. My recent work consisting of straight-down aerials of L.A. and New York, titled LANY, will be published later this summer by Thames and Hudson.