This deep red gem is the color of heat and passion — perfect for those born in the middle of summer.
by 1stDibs Editors
Pin
Share
Tweet
Email 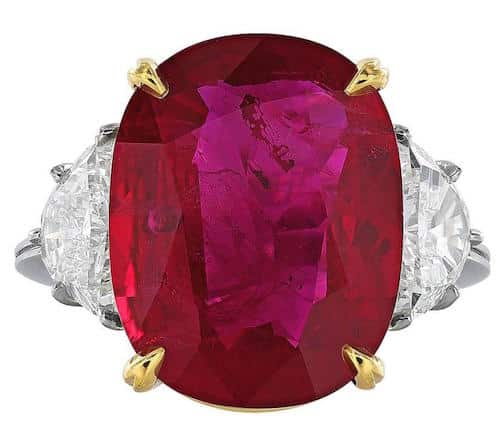 Rubies are one of the few gemstones that can give diamonds a run for their money. Just consider the Van Cleef & Arpels “scarf” necklace the Duke of Windsor presented to the Duchess on her 40th birthday, in 1936 — set with diamonds and dripping with rubies, a testament to the deep-red gemstone’s power — or the slippers encrusted with 4,600 rubies that Harry Winston made to commemorate the Wizard of Oz’s golden anniversary. July babies have permission to adorn themselves with this beautiful red stone even when it’s not their birthday. 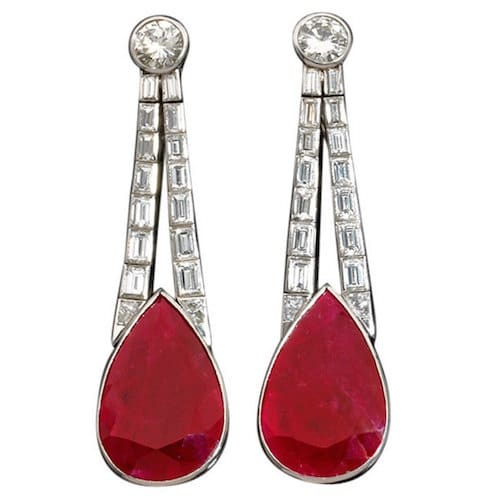 How Is a Ruby Formed?

Rubies are considered precious stones — along with diamonds, sapphires, and emeralds — and have a hardness of 9.0 on the Mohs Scale, surpassed only by Moissanite and diamonds. They are composed of corundum, a colorless mineral that is also the basic material of sapphires. In the July birthstone, the red of the gemstone — and the various hues seen in sapphires — are produced by the presence of trace elements. In the case of a ruby, this element is chromium. Rubies range in color from vermilion to a violet red. They are also pleochroic, which means that a stone’s hue can vary depending on the direction of viewing. The most sought-after color is pigeon’s blood: pure red with a hint of blue.

Rubies that are hosted in dolomite marble are the most prized: Because the marble is low in iron, so are the rubies, resulting in a more intense color. Rubies found in basalt, which has a higher iron content, are generally darker and less intense.

Where Are Rubies Found?

For centuries, the Mogok region of Burma (now Myanmar) has been the source of the highest-quality rubies, whose color is an intense red, almost vermilion. About 90 percent of the world’s rubies come from Mogok, leading to its nickname: the “valley of rubies.” Export of gems from this region is closely monitored by the government, which requires non-residents wanting to visit to get special permits. 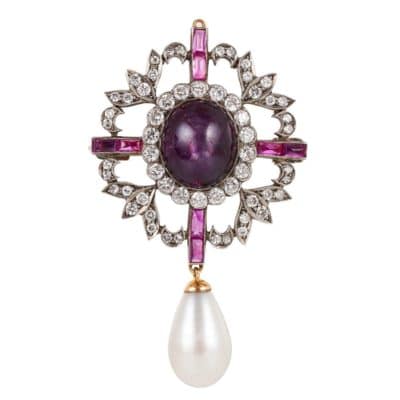 A late-19th-century pearl and ruby brooch. Offered by FEI.

In the past Thailand has also been a source of rubies, but production peaked in the 1980s and few mines remain. Today the greatest rival to Myanmar as a source of rubies is Luc Yen, Vietnam, which produces similarly high-quality stones. Additionally, certain African countries like Malawi, Madagascar, Mozambique, and Tanzania, also have mines. 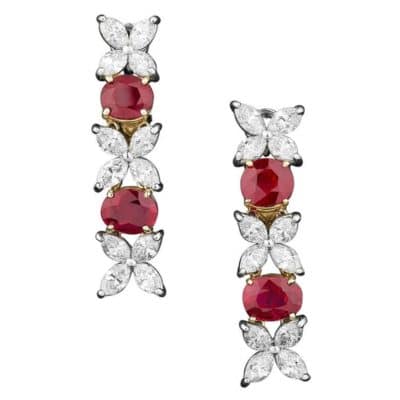 The word ruby comes from the Latin rubrum, meaning “red” (the Sanskrit word for ruby is “ratnaraj,” which fittingly translates to “king of the gems”). Today the world’s most prized rubies are found in museum collections worldwide, including the 138-carat Rosser Reeves Star and the 196-carat Hixon rubies. The former, mined in Sri Lanka, was acquired by advertising titan Rosser Reeves, who referred to it as his “baby” and kept it near him for good luck until he donated it to the Smithsonian, in 1965. The Hixon stone, considered the largest and most precious ruby in the world, is displayed at the Los Angeles Natural History Museum. The British Museum of Natural History has the 167-carat Edwardes ruby, named for Major-General Sir Herbert Benjamin Edwardes (1819–68), who defended British rule in India during the Indian Mutiny. It was donated to the museum in 1887 by art critic John Ruskin.

Shopping for a Ruby? 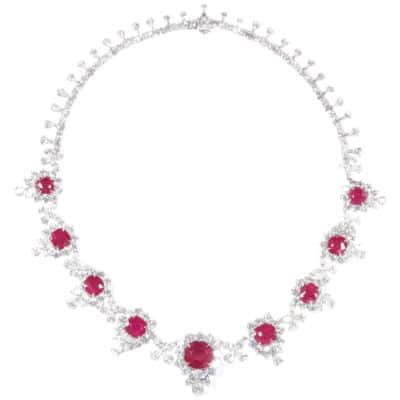 A diamond and ruby necklace, totaling over 36 carats. Offered by Diamond Scene.

The Four Cs of selecting the perfect diamond — color, clarity, cut and carat — also apply to rubies. According to the Gemological Institute of America, the color of the July birthstone should be a vibrant to slightly purplish red, and that the stone should be clear and inclusion free. Accordingly, the cut should show off its color and clarity. As for the last criterion, fine rubies more than a carat in weight are rare. Often, large rubies are more expensive than diamonds of comparable weights.