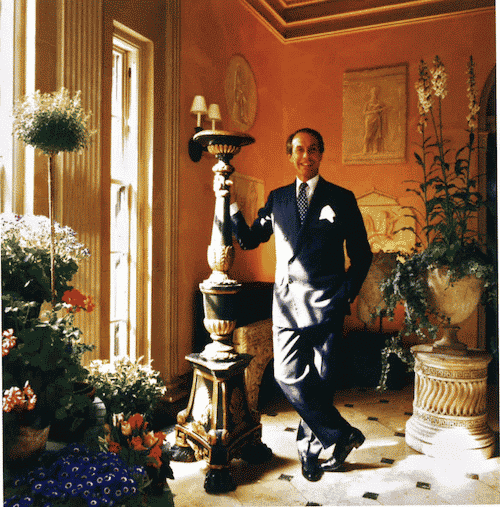 The designer, as pictured in the book Mark Hampton: An American Decorator (Rizzoli), by his wife, Duane Hampton.

Mark Hampton (1940–98) was a rare individual: He was an extremely gifted interior designer who counted the world’s wealthiest and most powerful people among his clients, and he also happened to be exceptionally erudite and just plain nice. As a decorator, he was often described as being a “relaxed traditionalist,” but in fact he admired and was proficient in all kinds of looks, crediting Le Corbusier and Frank Lloyd Wright as early influences. No interior dictator, Hampton viewed his work as a collaborative effort, always involving the clients and taking into account their own tastes and possessions. 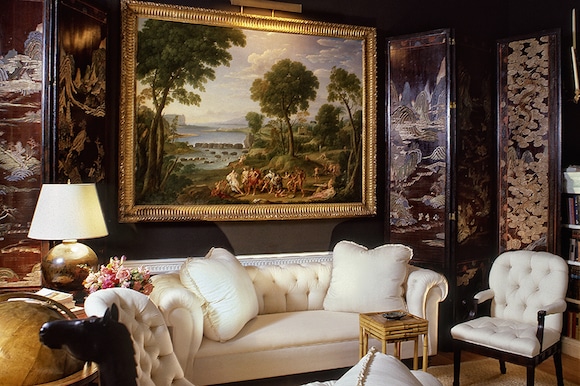 Mark’s design for the sitting room of the 1979 Kips Bay Show House. Photo by Peter Vitale

As he saw it, the decorator’s role was to make rooms “look great and reflect the owner at the same time.” Sensitive to his profession’s perceived triviality, Hampton defended his work in the introduction to his 1989 book Mark Hampton on Decorating by declaring that “to transform the bleak and the barren into welcoming places where one can live seems to me an important and worthwhile goal in life.”

Hampton’s heightened aesthetic sense, which he often expressed in apt and amusing sketches, along with his inquisitive and scholarly nature no doubt set him apart from those near and dear when growing up on the family farm in rural Plainfield, Indiana, where his father also worked as an undertaker. From the age of 12, Hampton began collecting old copies of decorating magazines and embarking on DIY design projects. His parents indulged these proclivities, while encouraging him to pursue a career in law. 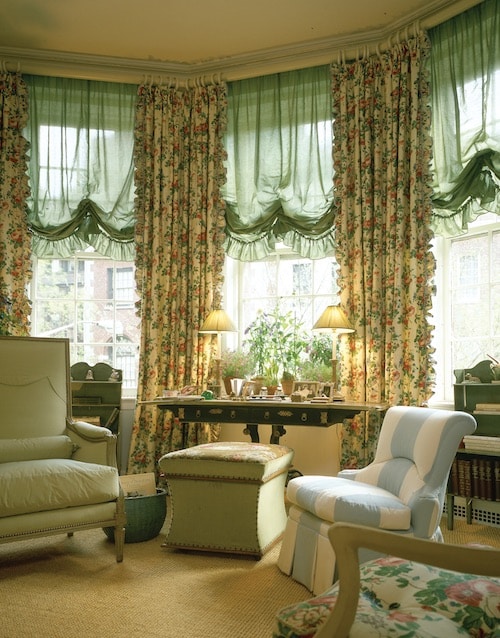 Being an obedient only son, Hampton tried hard to comply. He may be the only decorator on the AD 100 list who spent a semester abroad studying at the London School of Economics. But even then, he had difficulty resisting his true calling. He scored a part-time job while in London working as a draftsman and assistant for David Hicks, who was making waves by breaking all the English country house–style decorating rules. Nevertheless, in 1964, Hampton went on to law school at the University of Michigan, and it was then that he faced up to the fact that he must follow his own path.

A master’s from the Institute of Fine Arts at New York University followed. He earned the degree while working part-time for the ne plus ultra of patrician decorators: Sister Parish. He was now, too, married to Duane Flegel, a young brainy “co-ed” he’d fallen for in Florence, while on holiday during his fateful sojourn in London. She would become his right hand. 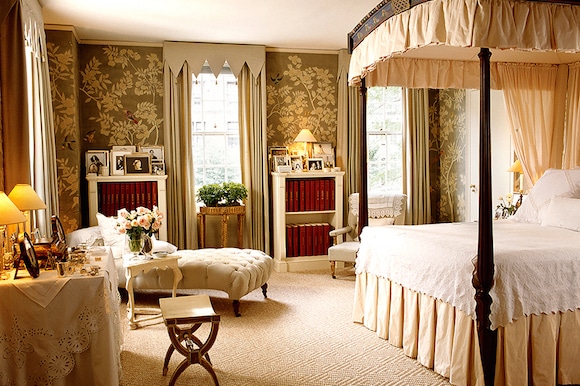 Mark and Duane’s Upper East Side home was featured in the July 1991 issue of House & Garden. Photo by Keith Scott Morgan

As luck would have it, the aspirant decorator was asked by his old boss Hicks to open a New York office for his bustling business providing the rich and trendy with super-mod pads. Hampton was happy to oblige. In fact, one of the earliest space he ever had published, credited to him and David Hicks, was his own one-bedroom apartment on the Upper East Side, in a 1968 issue of House & Garden. The living room featured a ceiling covered in a reflective, herringbone-patterned Mylar wallpaper, a Hicks-designed black and white hexagonal carpet and Louis XV–style chairs from the budget Door Store. It was hardly the look he would come to be known for, but it’s what got him known. After he and the mercurial Hicks had a falling out in 1970, Hampton spent six years working for Eleanor Brown at the staid, high-society decorating firm McMillen, Inc.

In 1976, Hampton opened his own firm. He worked in all styles at first but quickly became known for his own fresh take on traditionalism, which he wryly described as “a nice, undercooked look.” It was all very different in feel from Hicks, although he continued to deploy the drama of lustrous dark-hued walls, especially in chocolate brown, a Hicks signature. 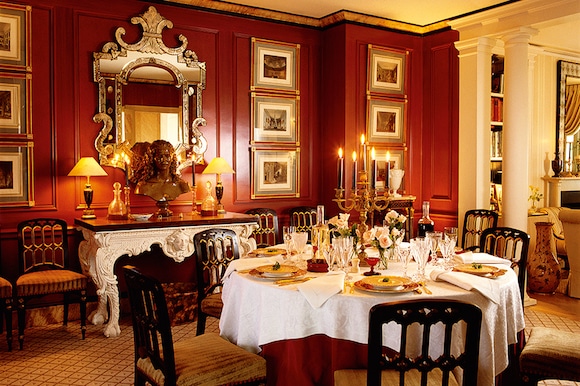 The dining room of Mark and Duane’s Upper East Side home. Photo by Keith Scott Morgan

Hampton’s timing was perfect. His light touch appealed to old-money types who wanted homes that were a bit more genial, while his talent for orchestrating grand patrician looks drew a new generation of New York arrivistes. And so he amassed a client list that included such high-society grande dames as Brooke Astor, Anne Bass, Pamela Harriman and Estée Lauder, as well as corporate dealmakers like Henry Kravis and Steve Ross. The 34-room triplex he designed for Saul and Gayfryd Steinberg at 740 Park Avenue, with its grand crimson living room, gilded furnishings and imposing Rubens, came to exemplify 1980s excess. (Likewise, the Steinberg home symbolized the ephemerality of wealth, as all the decor ended up on Sotheby’s auction block by the millennium’s end.) 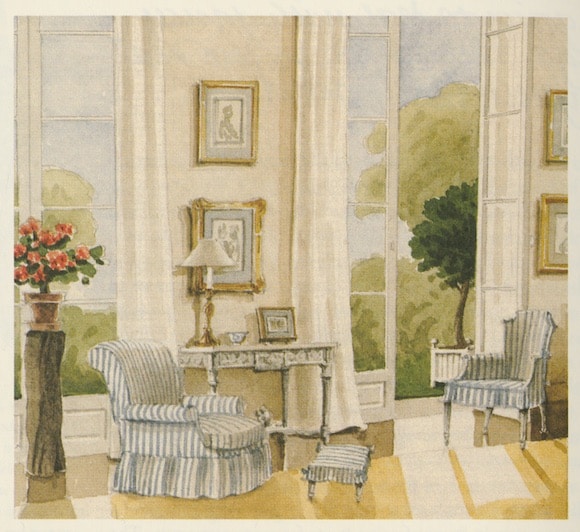 Mark had a talent for drawing.

During the Ronald Reagan presidency, Hampton contributed to the redecoration of Blair House, the president’s guest residence, and he designed for George and Barbara Bush the interiors of the vice presidential mansion. A close friendship with the couple developed, which resulted in Hampton also decorating the Oval Office, along with the family’s private quarters at the White House when Bush became president, as well as Camp David, the Bush summer home in Kennebunkport, Maine, their main residence in Houston and the interiors of the presidential library in College Station, Texas.

In addition to these impressive commissions, Hampton also wrote a much admired column on decorating for House & Garden, authored two books on the subject and lectured widely. A line of traditional furnishings conceived for Hickory Chair in the late 1980s was wildly successful. While he died at age 58, due to liver cancer, all who knew him remarked that Mark Hampton’s life was one lived both well and artfully. Happily, his decorating legacy endures through the talent and enterprise of his daughter Alexa Hampton, who took over his firm in 1998. 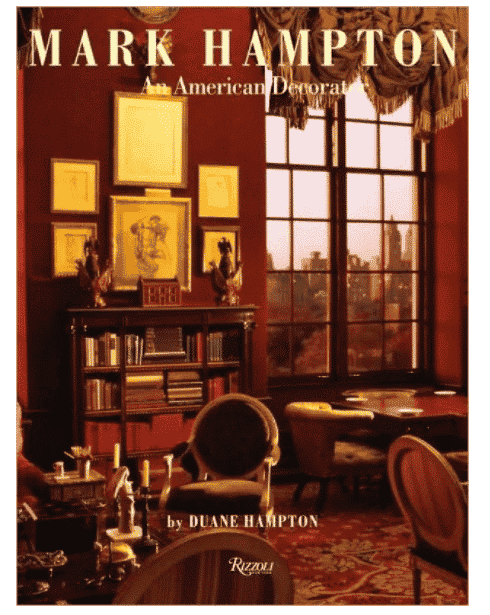