Get Nostalgic for Christmas in the Booming Mid-Century Years

The holiday season was a time for glitz and consumption in mid-20th-century America.
by Marisa Bartolucci
Pin
Share
Tweet
Email 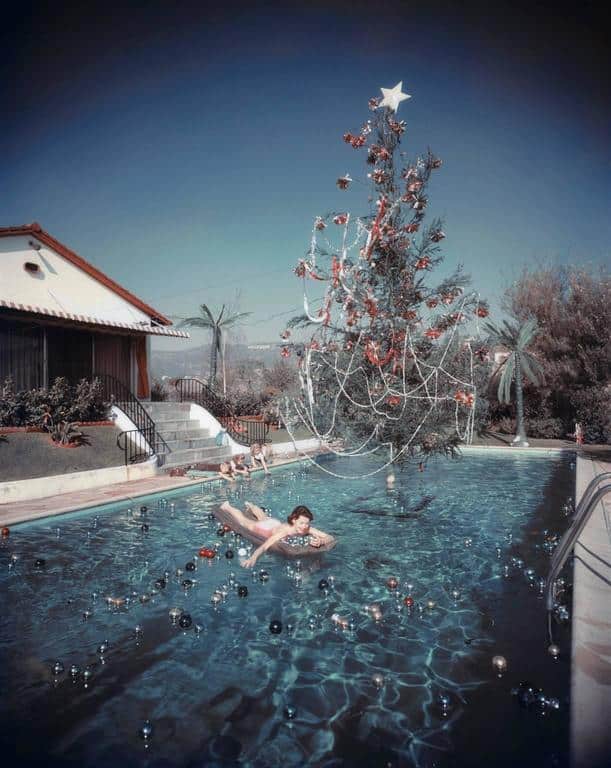 In her delightful and illuminating book Midcentury Christmas: Holiday Fads, Fancies and Fun from 1945 to 1970 (Countryman Press), Sarah Archer recalls a time in the United States when Christmas was truly great: factory workers were comfortably middle class, tidy new tract houses were in the reach of most families and brightly wrapped presents of Barbies, Slinkys and Silly Putty were plentiful under shiny aluminum Christmas trees. 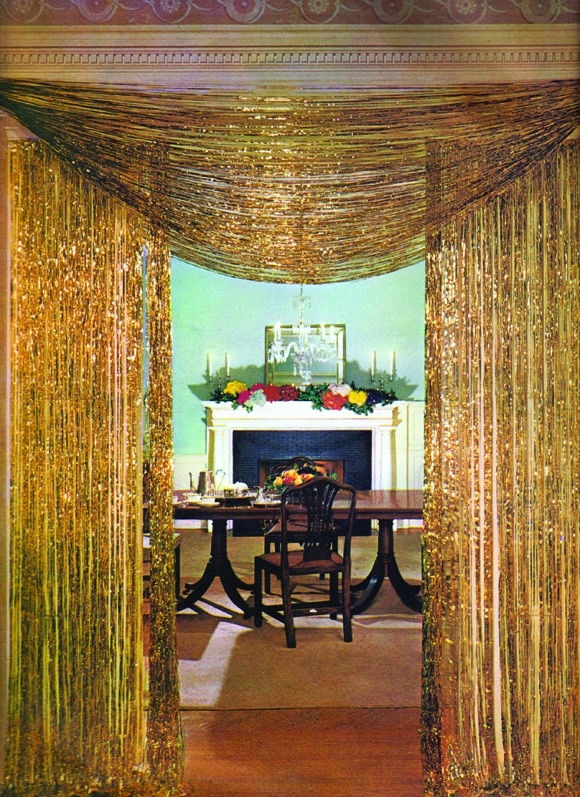 A tinsel-draped doorway in the December 1961 issue of House Beautiful. Photo courtesy of Hearst Communications, Inc.

Yes, those were the postwar years of the American Dream, when the country enjoyed unrivaled prosperity from a booming economy, as well as what now seems an almost unimaginable social cohesion, cemented by an exuberant domestic consumerism of new GE fridges, Zenith TVs and Chevy Impalas. They were also the years of the Cold War, when the threat of an armed Soviet conflict intensified the urge to cocoon with one’s nuclear family in suburban comfort. And they arrived after the successive national traumas of the Great Depression and World War II, periods when Americans were forced to scrimp and save and were grateful for any kind of roof at all. 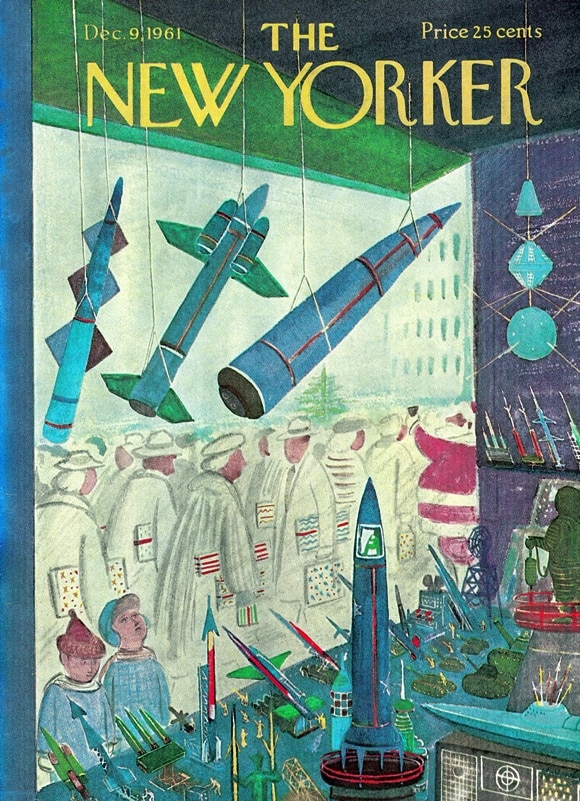 Children check out Cold War–themed toys in an Anton Kovarsky illustration on the December 9, 1961, cover of the New Yorker.

In an encapsulated history of Christmas, Archer explains how its traditions can be traced back to ancient Roman times when the god Saturn was celebrated through playful role reversals, joke gifts and acts of charity. Early Christians tried to transform the holiday into a pious commemoration of Christ’s birth, but with limited success.

The author slyly notes how the festive season’s transformation into the sentimental family holiday we know today began in earnest in New York, in 1837, after Clement Clarke Moore cleverly scribed his famous poem “A Visit from St. Nicholas,” more commonly known as “The Night Before Christmas.” A brilliant use of media to advance establishment and commercial interests, Moore’s charmingly illustrated verse instilled notions of folksy warmth and good feelings among city-dwellers, when the disparities between the haves and have-nots were at a new and worrying high. 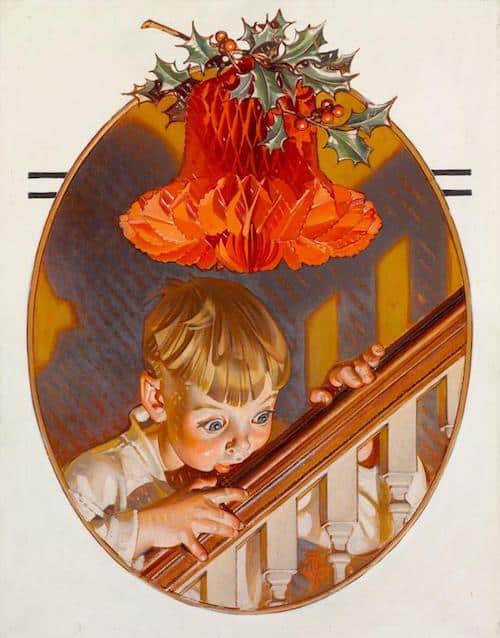 This was also a time, writes Archer, when “the rise of print advertising, increasing newspaper and magazine circulations and the ability of department stores all over the country to stock goods from the coasts meant the whole population was now participating in a nationwide ritual of retail.” By transforming the austere Saint Nicholas, known in Europe for secret gift-giving among the faithful, into the jovial peddler St. Nick, bringing his bundle of toys to well-behaved children, Moore was helping to inspire a cult of seasonal shopping, not just for gift-giving but for domestic adornment.

Eleven decades later, in the mid-20th century, media and retail partnered again on a new promotion of the pairing of Christmas and commerce with Miracle on 34th Street, a tale about a little girl getting a suburban house and a new family through the ministrations of Kris Kringle, the pretend Santa at Macy’s, who turns out to be real. 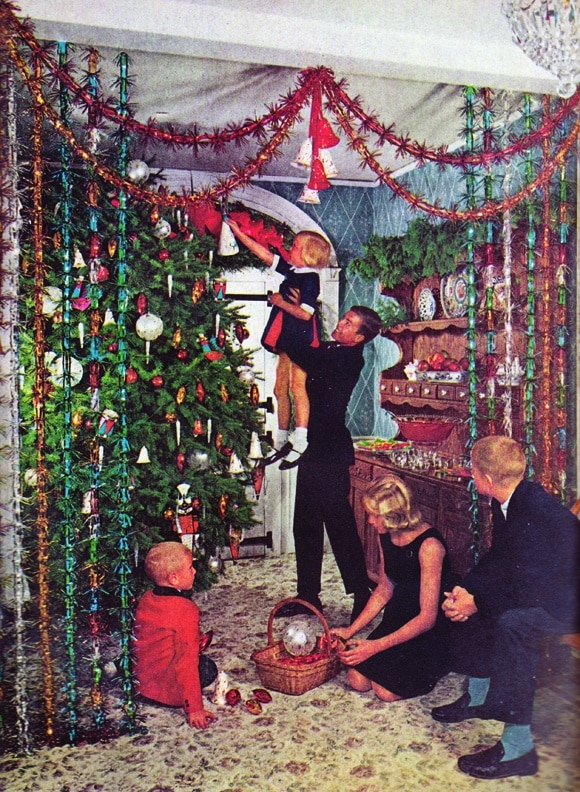 A happy family was photographed decorating a tree for the December 1963 issue of House Beautiful. Photo courtesy of Hearst Communications, Inc.

Indeed, Archer’s book is a revelation as to what an industry Christmas has become since Moore’s poem. In the early 1890s, the American retail mogul R.F. Woolworth began importing the colored glass balls with which Germans decorated their “tannenbaums” and was soon making $25 million a year from their sale, which in today’s dollars would be nearly $700 million! By the late 1930s, concerns over a potential war with Germany resulted in the Woolworth’s enticing the glass manufacturer Corning into producing the ornaments. Using the sophisticated “ribbon machines” with which it manufactured light bulbs, the company produced the first American-made glass baubles in 1939. After an initial production run of 235,000 which Woolworth’s funded, in 1940, Corning upped its production substantially, with Woolworth’s selling 45 million for just a few cents each. 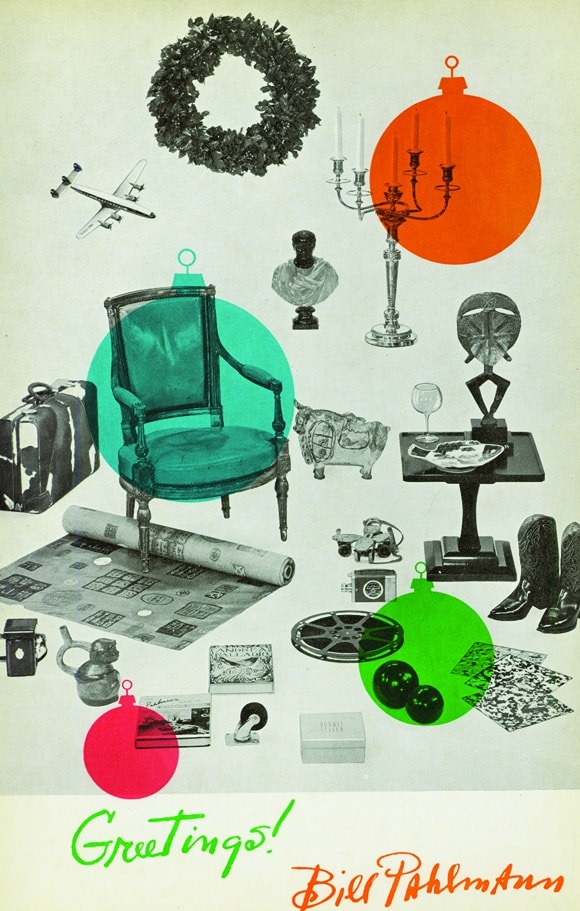 Decorating Christmas trees was big business. In 1927, General Electric offered the first outdoor Christmas lights, but they weren’t that dependable or long lasting. By the end of the 1940s, however, the company significantly improved the technology and began aggressively marketing the bulbs by producing handbooks on holiday decorating and sponsoring outdoor lighting contests. The effort paid off. By 1953, 300 million sets of Christmas lights had been sold to the country’s 44 million households, making these electric decorations what today would be a nearly billion-dollar industry. Christmas, it seems, helped fund the American Dream. 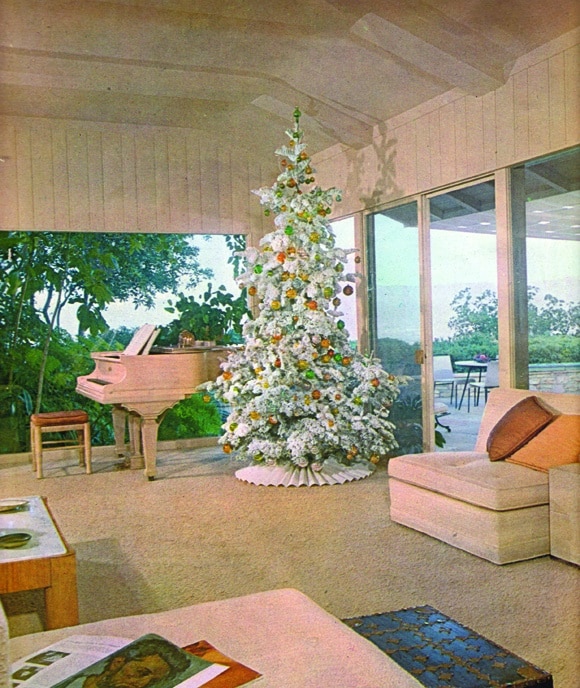 Now that a billionaire businessman has been elected president of the U.S., it’s a good bet that our Christmas celebrations will become ever more festive and glitzy, if only in the name of patriotism. By lining our houses and every tree in the yard with lights and decorating our indoor Christmas tree with every more extravagant American-made ornaments, we will all be doing our holiday-loving part to make America great again. 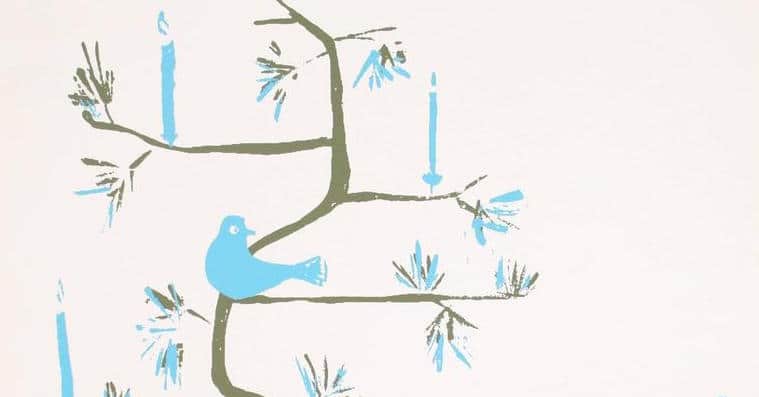