Misha Kahn Is the Millennial Maker for Our Anxious Times

The Study catches up with the Brooklyn designer as he prepares for his second solo show at Friedman Benda.
by Jill Krasny
Pin
Share
Tweet
Email

By the frantic sound of his voice, you’d think that Misha Kahn was cramming for midterm exams. But the 27-year-old designer, who graduated from the Rhode Island School of Design in 2011, was just nervously flitting about his studio in Brooklyn’s Bushwick neighborhood, putting the final touches on pieces for his second solo show, “Midden Heap,” at New York’s Friedman Benda Gallery.

“We’re working with so many different materials that I feel like an orchestra conductor,” Kahn said over the phone. He was finishing up a huge chandelier inspired by a man o’ war fish that’s composed of 75 pieces of glass. He was also waiting on gels from a factory in Padua, Italy, and once he learned they’d come through, he opted to build a chaise with a fiberglass shell.

“It’s definitely going to be full-on,” he said of “Midden Heap,” which is on view through December 16. When it comes to exhibitions, full-on is Kahn’s default mode. His first solo show at Friedman Benda last year, “Return of Saturn: Coming of Age in the 21st Century,” was an immersive experience that felt part arty funhouse, part your kooky aunt’s living room. The walls were painted excrement brown, while paint-splattered floor panels gave the impression of Jackson Pollock’s worst nightmare.

Absurdist? Sure, but that’s how Misha Kahn operates. As he explained at a recent Cooper Hewitt Museum-sponsored studio visit in Bushwick, the furnishings people want for their homes is obvious enough, but if you go about producing what they like, “you end up making things people have seen before.” Clearly, he relishes doing the opposite.

Wearing a black polo shirt with a splashy Memphis Group–style pattern, he rattled off an unorthodox inspiration for “Midden Heap”: trash, particularly trash found on the glass- and plastic-strewn beaches of Dead Horse Bay, in Queens. The debris there “takes on such an odd character,” he says, and “the push and pull of man versus nature.”

“A lot of this show has been me working with things to the point where your eye has to go around them, and you don’t know what’s on the back side,” he adds. “It’s a lot more engaging to work that way.”

Art Nouveau motifs are apparent in the new work, as is Kahn’s fascination with the altering forces of time and Mother Nature. “It’s been interesting, seeing what’s happened with all these major water-filled apocalypses,” he said of the recent uptick in massive hurricanes and devastating floods. “Living in New York and being so close to the water, I think we feel this imminent sense of this thing encroaching on us.”

Friedman Benda “shows so many pieces that are perfectly conceived objects, and I felt a lot of pressure to be that person, too,” Kahn said, reflecting on his place in the gallery’s roster. “But there’s been this realization that I’m not. So much of the work is spontaneous and more intuitive and layered. I think it’s a departure.” 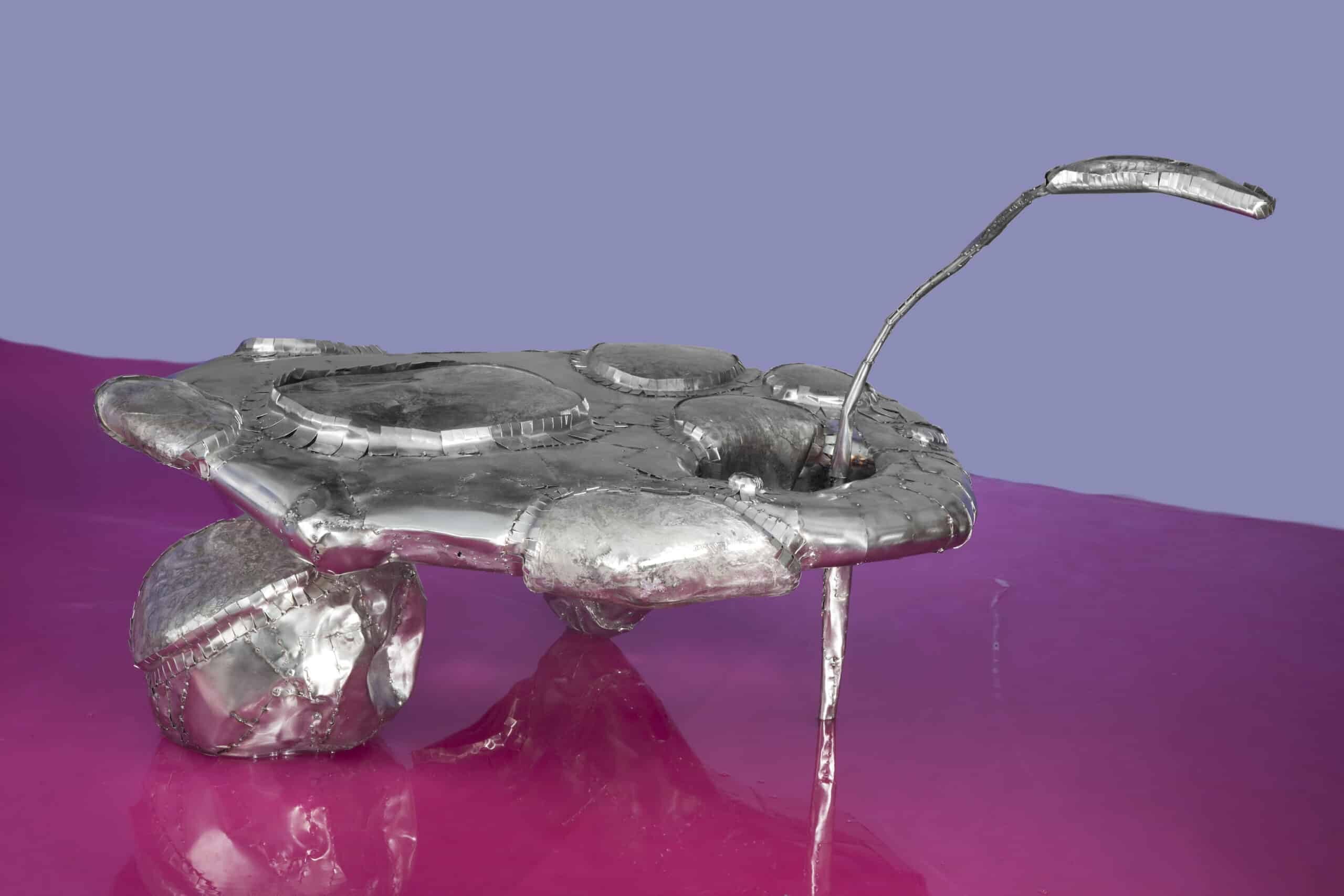