A Primer to the World’s Most Famous Diamonds

There are diamonds, and then there are diamonds. In the below column, we take a look at the rarefied group of stones that fall into the latter category. These seven gems have been bestowed with proper nouns; have histories of royal ownership; weigh up to 3,100 carats; and, in some instances, may or may not be cursed. Read on to learn more about these priceless diamonds. 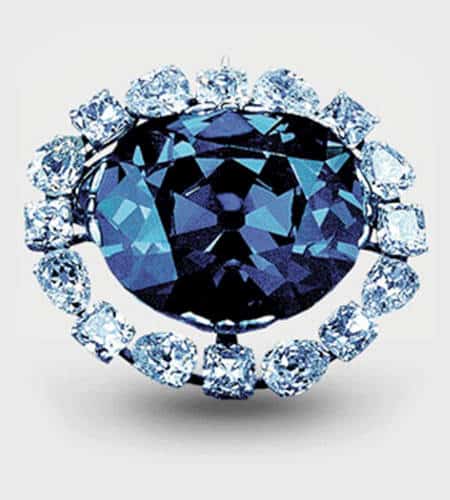 From 17th-century India to present-day Washington D.C., the Hope Diamond is well-traveled. The largest diamond in a public U.S institution, the Hope Diamond gets its name from the British financier and gem collector, Henry Philip Hope, who owned the stone in the 1830s. Quite famously, the Hope Diamond is reputedly cursed. The story goes that its “original” owner, a French merchant by the name of Jean-Baptiste Tavernier, stole the 115.16 carat blue diamond from the eye of a holy Hindu statue. In an Indiana Jones-style retaliation, the vengeful priests reportedly put a curse on anyone in possession of the gem.

Rumors aside, it is more likely that Tavernier purchased the diamond from the Kollur Mine in Golconda, India. He described the stone’s color as a “beautiful violet” before selling it to King Louis XIV of France in 1668. Several years later, the stone, now known as the “Blue Diamond of the Crown” or the “French Blue” was recut into a 67-carat stone by his court jeweler. Then in 1749, King Louis XV had the stone reset by his court jeweler for the Order of the Golden Fleece. During the French Revolution the jewels of the French Royal Treasury were turned over to the government and in September of 1792, during a particularly tense week during the upheaval, the French Blue was stolen. It has been speculated that the stone was briefly in the possession of England’s King George IV. By 1839, French Blue had changed hands to Hope, and become widely known as the Hope Diamond.

After Hope’s death it stayed in his family until 1909, when it was purchased by Pierre Cartier. Cartier, in turn, sold it to socialite Mrs. Evalyn Walsh McLean of Washington D.C., who requested that the jeweler mount the gem on a headpiece with a three-tiered circlet of large white diamonds. Years later, the socialite had the diamond into a pendant necklace (which is the design on view today). After McLean’s death in 1949, Harry Winston purchased her jewelry collection and sent the Hope Diamond on a decade-long world tour, before donating it to the Smithsonian Institution in 1958 where it remains today. According to the museum, the stone was removed from its setting in 1974 and was determined to weight 45.52 carats. 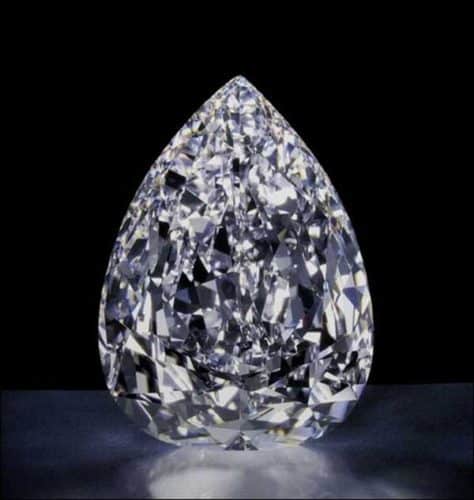 Weighing 3,106 carats, the Cullinan Diamond was the largest diamond ever discovered — today, the stones cut from the original Cullinan are part of the British Crown Jewels. Discovered at South Africa’s Premier Mine in 1905, the stone was named after Thomas Cullinan, a diamond magnate who owned the mine. The diamond was presented as a gift to King Edward VII of England in 1907 in its natural, rough state. That year, the Amsterdam firm I.J. Asscher — who received the royal commission to cut the stone — divided the original gem into nine numbered stones known as the Cullinans I-IX, plus 96 small brilliants and nine carats of unpolished fragments. The most well-known of these resultant stones are the Cullinan I and Cullinan II, which are frequently referred to as the First and Second Stars, and are the two largest colorless and flawless cut diamonds in the world. The 530-carat Cullinan I was set at the head of the Sovereign’s Sceptre, part of the regalia made for Charles II. The Cullinan II, a cushion-shaped brilliant weighing 317.40 carats, graces the band of the Imperial State Crown. 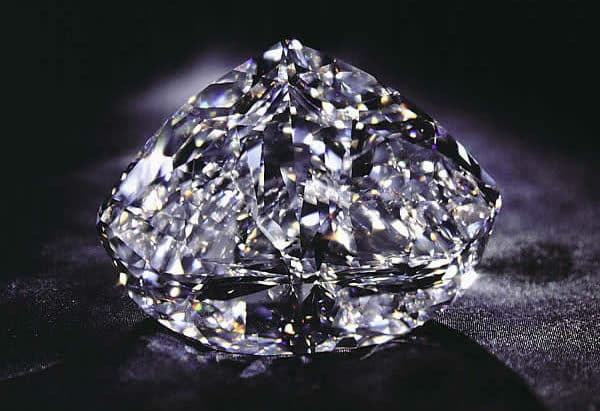 Like the Cullinan, the 273-carat Centenary Diamond also hails from the Premier Mine of South Africa, where it was unearthed by diamond firm De Beers in 1986. The company waited two years to make public the news of their discovery of the flawless stone, timing the announcement to De Beer’s 100th-year anniversary celebration in 1988 and fittingly dubbing it the Centenary Diamond. Nearly 600 carats in its rough state, the gem was cut by sixth-generation diamond cutter Gabi Tolkowsky in a special, underground facility created especially for the diamond. “From the moment I knew I was going to cut it,” he said, “I became another man. A strange man. I was looking at the stone in the day, and the stone was looking at me at night.” The resultant heart-shaped Centenary Diamond weighs 273 carats and has 247 facets (164 on the stone and 83 around its girdle) — and carried a $100 million dollar insurance policy. Since the 1990s, rumors have swirled that De Beers sold the stone to a private buyer; the company will neither confirm nor deny the claim, citing client confidentiality. 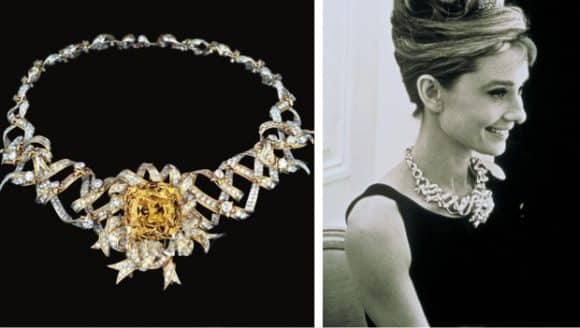 In the late 19th century,”King of Diamonds” Charles Lewis Tiffany — founder of famed jewelry retailer Tiffany & Co. — purchased a 287-carat yellow diamond discovered in the Kimberely Mine in South Africa in 1877. The stoned was the largest yellow diamond ever mined, and was fashioned by gemologist George Kunz into a cushion-cut brilliant of 128 carats. Kunz gave it a total of 90 facets: 48 on the pavilion, 40 on the crown, plus the table and culet. Breakfast at Tiffany’s fans may recognize the stone from promotional photos for the film — actress Audrey Hepburn wore it as part of the Jean Schlumberger-designer Ribbon Rosette necklace. Schlumberger worked with the stone again years later, when he mounted it to create a whimsical “Bird on a Rock” brooch for the jewelry designer’s career retrospective at the Musée des Arts Décoratifs in Paris. In 2012, the stones were reset once again into a diamond and platinum necklace to commemorate the 175th anniversary of Tiffany & Co.. Today, the exquisite diamond is on view in the brand’s New York City flagship store. 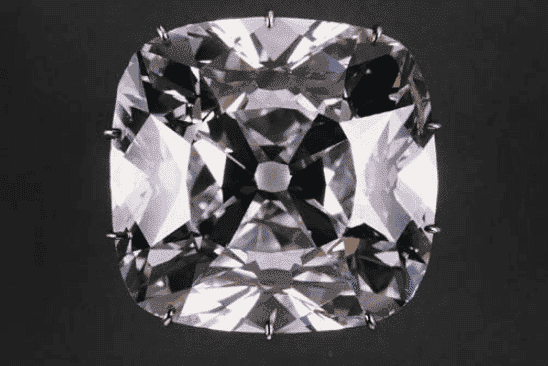 The Regent Diamond, discovered in the Kollur Mine in Golconda, India in 1698, has been at home in the Denon wing of the Musée du Louvre in Paris since 1877. The stone is sometimes called the Pitt Diamond after Thomas Pitt, the British governor of Madras who sent the 426-carat stone to Britain to be cut. Regent Philippe d’Orléans acquired the stone in 1717 for the French crown. After two years of meticulous work, the Regent diamond was shaped into a 141-carat, cushion-cut brilliant stone. The stone is known for its exquisite clarity. Jewelry scholar Gérard Mabille describes it as “of the first water,” or perfectly white and flawless. The Regent Diamond was passed down from one French monarch to the next, and mounted on the crowns of Louis XV, Louis XVI, Louis XVIII, Charles X and Napoleon III. Less conventionally, Marie Antoinette used it to decorate her hat and Napoleon had it mounted on his double-edged sword. Its final reincarnation was on a Greek diadem that belonged to Empress Eugenie, which is how it is presently displayed. 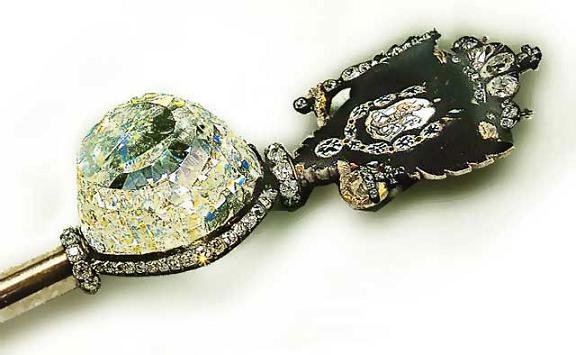 The Orlov Diamond as mounted in the Imperial Sceptre.

Likened to “half a bird’s egg,”the Orlov Diamond resides atop the Imperial Sceptre at the Kremlin Diamond Fund in Moscow. The origins of the Orlov are murky but a couple of facts are clear: it was mined in India’s Kollur Mine (just like the great Hope and Regent Diamonds) and weighed 787 carats. At one time known as the Great Moghul, the famous diamond was at one time fitted into the eye of a deity in a temple in Srirangam, an island in South India. Reportedly stolen on a stormy night in 1747 by a soldier who posed as a worshipper, the diamond slowly made its way to Europe — passing through the hands of many greedy merchants — before finally settling in Amsterdam. It was here that, around 1768, a diamond merchant by the name of Shaffrass sold the stone to Count Grigory Grigoryevich Orlov, the Russian nobleman and officer who helped his lover Catherine the Great overthrow Peter III and ascend the throne. Orlov purchased the diamond as a gift for Catherine. In turn, Catherine ordered her jeweler C. N. Troitinski to mount the diamond in the sceptre in 1784. The Orlov is the most unusual diamond in its shape and size. Per the Kremlin’s official records, the Orlov in its present state is a white diamond with a blueish-green tint, and weighs 189 carats. 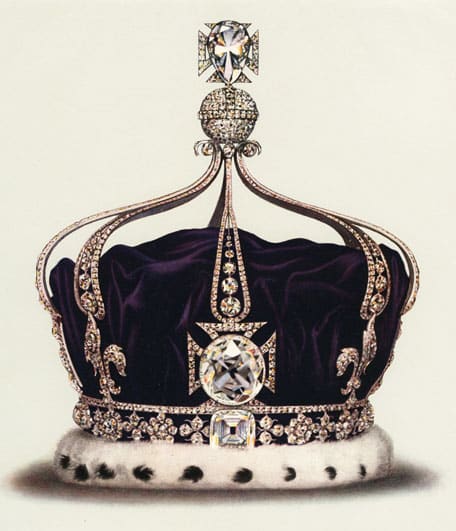 The Koh-i-Noor Diamond, as depicted in a lithograph of Queen Mary’s crown.

The Koh-i-Noor Diamond, also known as the Mountain of Light, has perhaps the most storied and turbulent past of all the famous diamonds. The gem is another product of India’s Kollur Mine in India, where it was discovered in the 13th century at a recorded weight of 186 carats. Under terms of a treaty following the Anglo-Sikh War, it became the property of the British in 1849. After the diamond was displayed in the Great Exhibition of 1851, Prince Albert had the stone cut to its present 105-carat weight and refashioned into an elegant, oval-cut stone. The stone is famously said to bring bad luck to any man who wears it — hence it has only been the women of the British monarchy who have had the pleasure of owning it.

Currently on display in the Tower of London as part of the Crown Jewels, the stone is mounted in a crown that once belonged to Queen Elizabeth. But the Koh-i-Noor has been the subject of a Britain-India ownership dispute for nearly 70 years. According to the most recent court proceedings the diamond was “neither stolen nor forcibly taken” but  “gifted to the East India company by the former rulers of Punjab in 1849” — but the Indian government vowed in April of this year to continue to pursue the return of the stone.

Story by Bella Neyman. Neyman is a New York based gallery director, curator, and journalist.