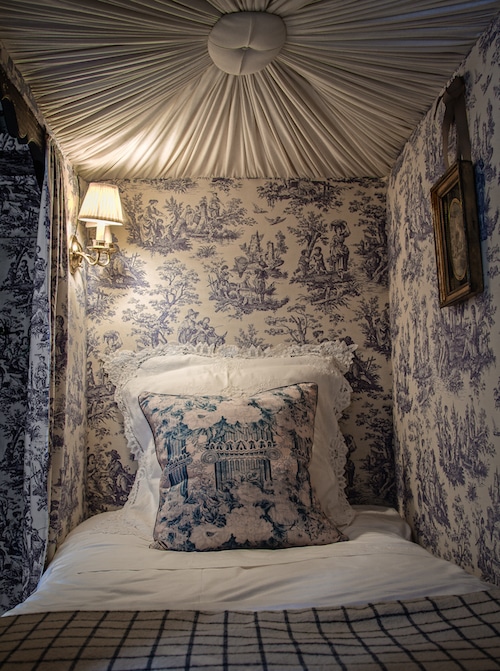 Go figure that the seemingly simple concept of cloth printed with allover scenic patterns — best known by its French moniker toile de Jouy — has remained quite popular since its development in the 17th century. Louis XVI, Marie Antoinette and their courtiers adored the printed cotton, even bestowing a coveted Manufacture Royale seal upon their local textile mill in Jouy-en-Josas, a mere six miles from the Palace of Versailles.

The mill’s founder, Christophe-Philippe Oberkampf, chose the town for its proximity to the Bièvre river’s clean water — a crucial part of the printing process. He began hand printing the cotton with woodblocks, and soon innovated an etched-copperplate technique to create even more nuanced motifs. Oberkampf commissioned artists to create illustrations depicting current events and cultural infatuations, such as the now-famed design made to commemorate the Montgolfier brothers hot-air balloon flight.

In the late 18th century, Benjamin Franklin procured a bolt of toile for his wife while abroad, spearheading a craze for the fabric across North America. More than 250 years later, the rage for toile continues on both sides of the Atlantic.

Below, contemporary creators and interior designers make the case for stylishly implementing the pattern in today’s interiors. 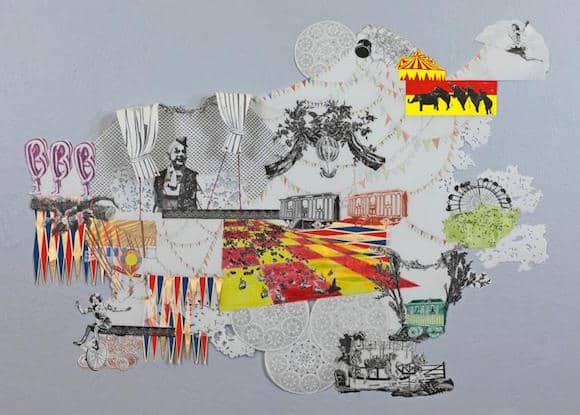 Georgia-based artist Laura Tanner Graham creates mixed-media work that “takes characters and scenes from 18th-century toile patterns and adapts them to contemporary political conversations,” as she puts it.

Textiles from the 1700s pictured idealized vignettes of French aristocracy (think: scenes of hunting, recreation and leisure). However, says Graham, “the larger narrative [of the patterns] was that of political strife stemming from a social and economic divide. The printmakers were able to actually highlight the fallacies put forward by the aristocracy.”

Similarly, Graham bases her narratives on culturally relevant topics such as female activism. Take her 2015 piece Jane. “It is named for the first bearded lady to join a traveling circus,” Graham explains. “Although many considered her a ‘freak,’ she became a symbol of success for women.” 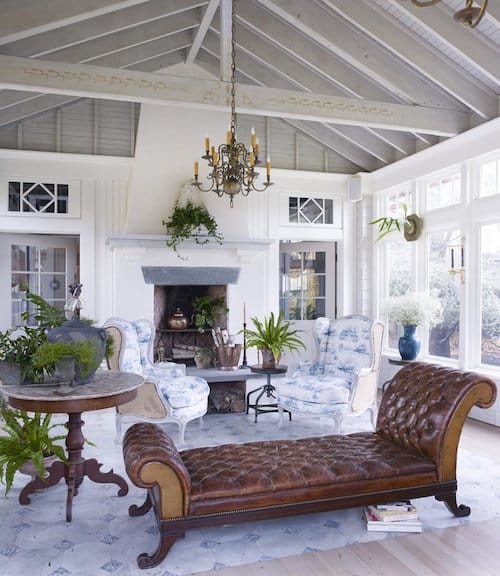 Alexandra Loew modernized and personalized toile for the enclosed patio of a beach house on Long Island, New York. “The client had a family crest, and I was charged with incorporating it in an understated way, somewhere in the house,” the designer says.

So she took details of the family’s history and “developed a traditional toile around the stories, characters and artifacts.” Lowe had the custom motif printed on solution-dyed acrylic to prevent sun-bleaching and mildew. 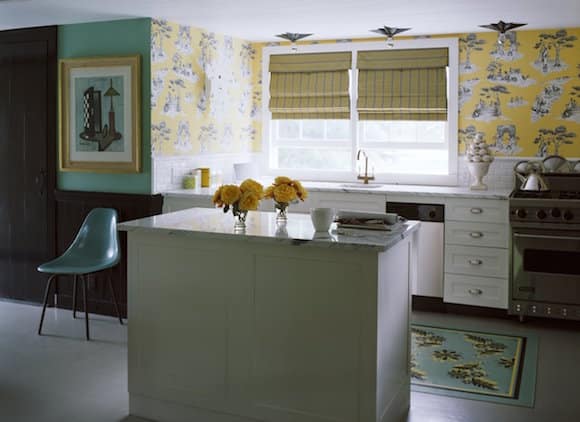 Interior designer Sheila Bridges took toile to eclectic heights by implementing a sunny yellow wallpaper in the kitchen and dining room of a cottage in New York’s Hudson Valley. The wallcovering is part of Bridges’s Harlem Toile de Jouy collection, which comes in a variety of contemporary shades and is printed with scenes that satirize African-American stereotypes. 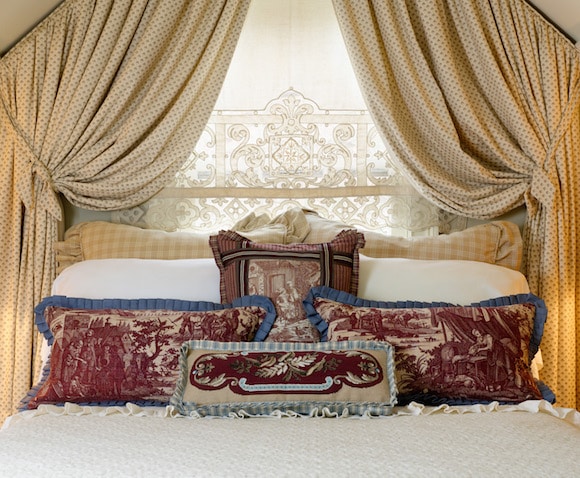 Mary Jane McCarty has amassed an extensive textile archive over the last 25 years, with antique fabrics dating back to the 18th century. Her fascination with toile was sparked by the classic design depicting the Montgolfier brothers’s hot-air balloon flight.

“My parents’ bedroom was upholstered in le ballon de gonesse. I liked to lie in their bed and gaze at the scenes and imagine what life was like in those days,” McCarty says. Now, she converts her antique and vintage textile finds into decorative pillows and lampshades.

Photo by Gridley and Graves 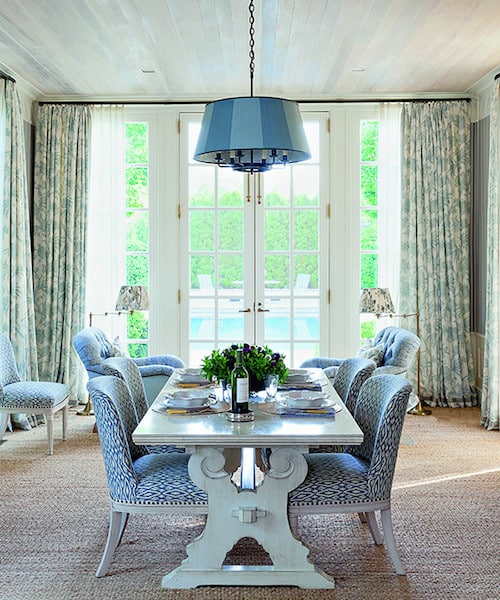 Designer Markham Roberts introduced elements of elegance and wonderment to a Nashville home’s dining room with floral toile curtains. The fanciful drapes are counterbalanced by simple sisal carpeting and distressed boards on the ceiling.

Photo by Nelson Hancock and courtesy of Vendome Press

Match a Chair to the Walls 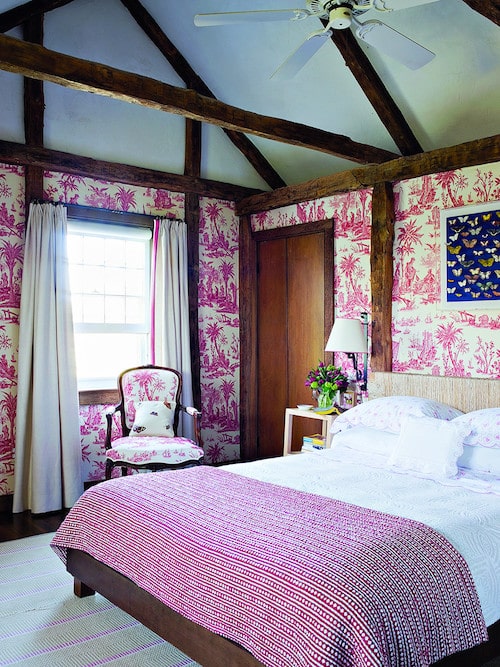 Architect and designer Tom Scheerer used a toile de Jouy from Quadrille Fabrics for a bedroom in an East Hampton, New York farmhouse. The tropical magenta textile covers the walls and an armchair to brilliant effect.

Photo by Francesco Lagnese and courtesy of Vendome Press