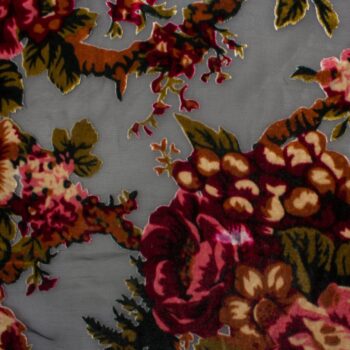 A close-up of velvet treated by the devoré technique.

Devoré is a technique for creating a patterned effect on fabric, most frequently velvet. The term comes from the French verb dévorer, meaning to devour. In the devoré process, a yarn of two different fibers (one cellulose or viscose-based, and one protein- or polyester-based) undergoes a chemical process in which an acid solution is placed in a distinctive pattern on the textile. The result is a burn-out effect, in which the cellulose-based parts of the fabric’s pile are dissolved and the protein-based portions are left intact. On velvet, patches of silk ground alternate with areas of velvet pile, and on cotton and linen, a laser-cut effect is achieved. The devoré technique was developed in Lyon, France, at the end of the 18th century, as a means of more cheaply producing textiles with a lace-like effect. Silk velvet devorés were popular in the 1920s and 1930s, and the technique returned to fashion in the 1990s, when the British fashion designer Jasper Conran used it in his designs.

Want to own your own vintage devoré piece? Shop all devoré on 1stdibs.