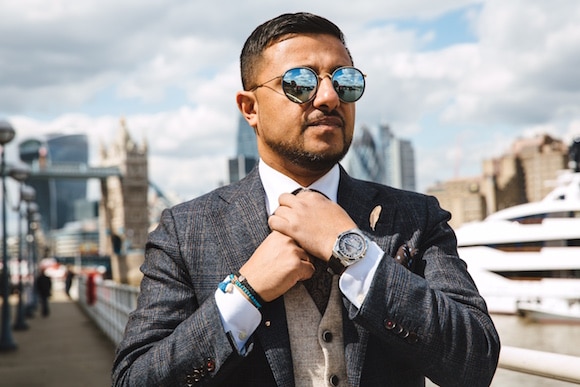 Who’s that dashing man in a custom suit, stepping out of a convertible with a Montblanc Rally Timer strapped to his wrist? Or driving a Porsche through the streets of Chicago, angling a handsome Roger Dubuis toward the camera? It’s Anish Bhatt, better known to his 1.7 million Instagram followers as Watch Anish.

Bhatt, a Londoner who worked for fashion-industry heavy hitters like Dior and Louis Vuitton early in his career, started a Tumblr blog devoted to his passion for watches in 2011 and opened his Instagram account in 2012. Since then, he’s earned an impressive social media following and a reputation for making the arcane world of high horology accessible to a new generation of collectors with images that are, in a word, cool.

Instead of the close-ups of intricate mechanisms often associated with fine watches, Bhatt set out to deliver pics of the lifestyle that the owner of a high-end watch might enjoy: five-star hotel suites, private planes, fast cars and dramatic locales. Commenters posting multiple fire emojis ensued. 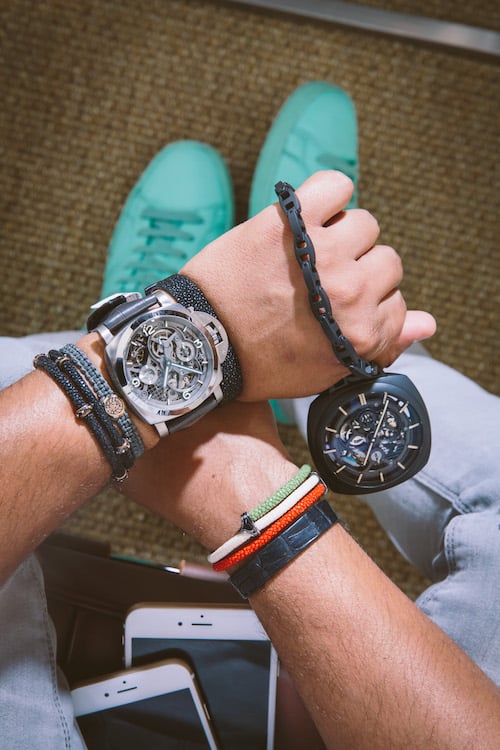 The Watch Anish brand now comprises Bhatt’s Instagram, Facebook, Twitter, Snapchat and Tumblr accounts; a website; a quarterly magazine, which debuted at Baselworld in March; and a spate of collaborations, including a line of watch- and car-themed slippers for Mount Street Shoe Company, which launched last month. He also leveraged the expertise he gained in building Watch Anish to start Lion Luxe Media, a consultancy that advises other luxury brands on digital strategy.

We caught up with Bhatt to discuss his approach to men’s style, his collecting habits and his advice for starting a collection of your own. His advice? Invest in a Rolex, make mistakes and don’t let the experts tell you what to wear.

On Instagram, it looks like you wear graphic tees, ripped jeans and Yeezys just as often as three-piece suits. But you definitely have a distinctive style. Is there a unifying theme?

I’m a Gemini, so I wouldn’t say I have multiple personalities, but I’m influenced by a lot of things. That’s reflected in a lot of aspects of my life, from my clothes to my watch collection to the type of art that I collect.

I’m not the type of person who has the same white shirt 25 times over in their cupboard and the same black suits. I mix things up, depending on where I’m going and what mood I’m in. I mix certain aspects that are bold — like sneakers or T-shirts or jeans that are quite loud — with other elements that are more understated. So normally I’ll pick, maybe, a loud jacket to go with everything else, because then you have one statement piece in that outfit.

And of course with my suits, I try to go for quite distinctive cuts, very Italian inspired, subtle really, but with quite bold fabrics. A mixture of double-breasted or three-piece suits.

Do you lean toward any particular suit makers?

I have maybe four or five that I work with, including Scabal on Savile Row. There’s a very good tailor friend of mine in the Middle East called Amer Ejjeh. And there’s an Italian tailor I just ordered my first suit from. The company is called Amarcord, and it’s the first time that I’m having a suit made by a lady.

Having my suit fitting on the suite balcony. Yesterday in Milan at @excelsiorhotelgallia with @amerejjeh 🇮🇹

How many watches are in your personal collection? Are they mainly contemporary or vintage, or is it a pretty even split?

It’s somewhere around 60 or 70. I stopped counting a while ago. I have everything from really small, classic vintage dress watches — small sizes like 34 millimeters, 36 millimeters — up to really big, aggressive sports watches. I’ve been collecting watches for about 18 years now, so my tastes changed. Also, I appreciate different things for different occasions. My collection is very diverse.

Do you remember the first watch that you bought? Or do you still have it?

The first watch that I bought — I mean, the first proper watch — was when I was 18. I bought a Vacheron Constantin Overseas in steel. And yeah, I do still have that.

Do you have a favorite?

Not really. Wearing a watch consistently for, like, a week is probably my record. I wore a Richard Mille for the last three days. Today, I’m wearing a SevenFriday. I’m in Zurich, and yesterday, actually, we did some photo shoots for them. And now I’m going to Paris. I have a Christophe Claret, so I’ll probably wear that while I’m in Paris.

“Top down in the winter, that’s what winners do” – Jay Z talking about this shot of the @montblanc Rally Timer on my wrist* *disclaimer: might not be completely true

Are there particular design elements or complications that you lean toward when you’re choosing a watch?

Nowadays, I try to go toward a size that’s not so huge. Whereas before I used to collect the really big Panerais, like the 48 and the 50 millimeter, now I probably go more toward a 40 or 42 millimeter dial, typically.

Apart from that, I like watches that can tell the time in an interesting way, which is what cool, independent brands tend to gravitate toward. I like brands that are avant-garde and pushing the way that time-telling is done but that can also retain a classic look. Something like A. Lange & Söhne Zeitwerk, for example, is designed in a very classic and understated way, but underneath it’s really complicated and pushing the envelope of how mechanics work with time-telling and with watchmaking.

Is there a Holy Grail watch that you’re stalking right now, something you’re dying to have?

Honestly, at any point in time, there’s probably a list of minimum eight to 10 watches that I’m like, “If I see that, I’m buying it on the spot.” So there are a few, ranging from classic Pateks to some extravagant, small-production independent brands like Greubel Forsey, Urwerk, MB&F.

In terms of advice for building a watch wardrobe, what are the classic watches that every man should own?

I do think it’s a good idea, at some point, to own at least one Rolex, because the brand is so strong, not just as a watch brand but as an overall luxury brand. The watches they make are so well put together, and they hold their residual value. So it’s one I would suggest you should try and own, whether it’s a Datejust, a Precision or Air-King, or something more complicated, like a Submariner or a Daytona.

That being said, a collection, like anything else, is very personal, so it depends on the kind of thing that you like. Are you someone who prefers a leather bracelet instead of a metal strap? Maybe you’ll gravitate toward a Jaeger-LeCoultre or a more classic brand that makes dress watches as opposed to sports watches.

The first five or 10 watches I bought were learning purchases. You make mistakes sometimes, and you buy at the wrong price, or you buy a watch that you think you like, but down the line, you decide you don’t really like it anymore. There’s nothing wrong with that. It just means your taste has changed as maybe you’ve learned more or you’ve been exposed to a wider range of watches.

Happy Birthday to my big brother the Big Arbab @jacobarabo 💎

A lot of people probably feel like they’re making mistakes.

It’s OK to make mistakes, and everyone does. People are always worried about “If I buy this, I’m going to lose a lot of money.” The only way to try and avoid that is to educate yourself a bit more, talk to people, ask people for advice. The retailers will give you advice, and that’s fine. But also ask people who don’t have an agenda. Ask people in your peer group. Ask people who are collectors themselves to give you good, concrete advice.

What are the most important things to look for when you’re buying a vintage timepiece?

In my opinion, the most important factor in determining the value of a watch is the condition. After that comes the rarity. After that comes all the other stuff. But the condition is something you should absolutely look at. How nice is the case? Has it been polished? If so, has it been over polished? What is the dial like? What are the hands like? Does it look like it’s oxidizing or not? You buy for condition first.

Feeling back home at @ultimagstaad this afternoon, and reading @n_foulkes incredible book, The Impossible Collection Of Watches 😱

What are your thoughts about pocket watches? At one time they seemed to be a popular gift, or something you might hand down, but people haven’t been talking about them lately.

Some pocket watches are really beautifully made. And in terms of collectability, I feel like they’re really undervalued. The thing is that each new generation doesn’t want to be like the previous one. Sons don’t want to wear the same things that their dads did. They want to become their own person, so styles change. But actually, if you buy a pocket watch now, I feel like you’re almost paying 50 percent of the value it should be, because in the market it’s so under-appreciated.

How do you feel about engraving? Does it decrease the value?

Yes, it may. Not necessarily in every case. I don’t ever engrave anything for myself, but if I’m giving a watch to someone, I presume that they wouldn’t sell it because it’s a gift. So then I would engrave it with a nice message and maybe with the person’s initials.

Are there dos and don’ts as far as how to style a watch? Don’t wear two watches at once? Don’t wear a canvas strap to a black-tie event?

There are rules, but rules are made to be broken. If you feel comfortable wearing a canvas strap with a black-tie suit, that’s fine. A lot of people will tell you don’t put a NATO strap on a dress watch, but sometimes, actually, it kind of works. It’s basically a nylon strap that was made specifically for military use, so it’s quite distinctive looking. It’s made to be worn primarily on dive watches, also on sports watches, but not really on dress watches. But then I’ve seen ones that look really good on dress watches as well.

The best stories are found between the pages of a passport 🇯🇵

Actually, why should anyone wear a watch in the 21st century, when we mostly check our phones for the time?

The truth is, even I do that. If I want to know the time, I probably check my phone nine times out of 10. But I don’t really wear a watch to tell the time, actually, which is quite ironic. I’ll look at the hands, or I’ll look at the dial in the sunlight at the way it changes color. Or I’ll look at the case, the brushed metal against the polished side, that contrast. Or I’ll just wind it — that feeling of winding it or setting the time on it or looking at the movement. To me, it’s a piece of art that I carry around and that I can look at and appreciate the same way I might hang a Jeff Koons on my wall and look at that painting, you know, 10 times a day.

And it really is a conversation starter, in a weird way. I remember being in Japan at a really small sushi restaurant. I was wearing a Richard Mille, and some guy came up to me and started talking to me in Japanese, and I didn’t know what he was saying, because I don’t speak Japanese, but he pointed to my watch, and he pointed to his, and he was wearing the same brand, and we started drinking together. And to this day, I don’t know what we were talking about, but we sat there — we had a really cool time.