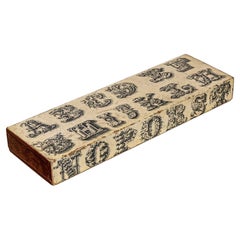 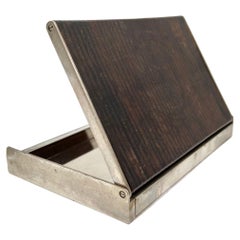 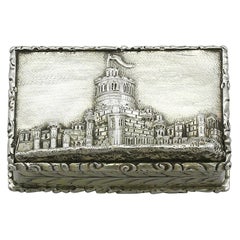 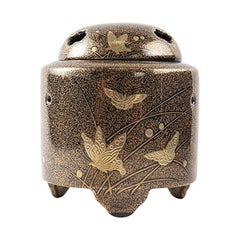 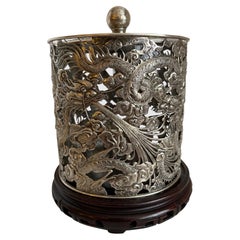 19th Century Majolica Elephant Tobacco Jar Onnaing
By Onnaing
Located in The Hills, TX
Majolica tobacco jar Onnaing, circa 1890. The two handles are elephants heads, decorated with corn, the handle of the jat is a corn. Usually in blue.
Category

Antique Handcrafted Mid-19th Century Cocobolo Wood & Brass Cigar or Jewelry Box
Located in Lisse, NL
One of a kind and excellent condition antique box. The rare shape of this mid-1800s box is just as aesthetically pleasing as its marvelous color. Cocobolo is one of the most beaut...
Category

Cubano Grey Humidor
Located in Paris, FR
Humidor Cubano Grey with inside lining in cedar wood in light brown finish, inside box with a hygrometer and a humidifier. Main structure in walnut wood covered with high qualit...
Category

Art Deco Style Box with Ebony Veneer, with Inlays in Bronze and Springwood

Silver Book-Shaped Cigar Box
By Tim Burtwell
Located in London, GB
Large fine quality handmade wood-lined silver box with gilded sections, in the form of a traditional leather-bound book. The body is engraved to resemble the pages and the spine to r...
Category

"Mountain Goat Humidor," Art Deco Lidded Container with Teal-Turquoise Glaze
By Cowan Pottery
Located in Philadelphia, PA
One of the most charming and rare of the many ceramic creations issued by the Cowan company in suburban Cleveland, this humidor depicts a baby mountain goat atop a peaked humidor, th...
Category

19th Century Black Forest Carved Humidor
Located in High Point, NC
19th century hand-carved black forest humidor with a figure of a dog and cat. The cat is atop a barrel, which has a lid which lifts to reveal a compartment for tobacco. The barrel is...
Category

Art Deco Wooden Walnut Box with Inlay Work, Austria, circa 1920
Located in Lichtenberg, AT
Charming Art Deco wooden walnut box out of Austria from circa 1920. The decorative box from the early 20th century can be used in many ways: for example as jewelry box or as a humido...
Category

Eli Bleu and Jean Puiforcat, Stingray Sterling & Rosewood Cigar Humidor, 1980s
By Jean Puiforcat
Located in New York, NY
Made of such sophisticated materials as stingray skin, sterling silver and rosewood, this beautiful and rare cigar humidor with hydrometer of an outstanding workmanship features a re...
Category

Gorham Athenic Cigar Box with Cecil Aldin Enameled Plaque and Silver Decoration
By Gorham
Located in Cincinnati, OH
This fabulous circa 1902 cedar lined cigar box was made by Gorham as part of the company's Athenic range, introduced at the turn of the 20th century. The 3 pound 10 ounce rectangular...
Category

Cigars were not always packaged in what we now know as the antique cigar boxes and humidors that have over time become eye-catching decorative objects as well as collector’s items.

Outside the United States, cigar boxes are said to have originated in the 1840s when a German businessman, Hermann Dietrich Upmann of H. Upmann Cigars, bought a cigar factory and opened a bank in Havana, Cuba. Upmann reportedly handed out cedar cigar boxes branded with advertising for the bank as gifts to his banking clients. In the early 1860s, after years of cigars being shipped in big crates or barrels, cigar boxes became a requirement when the United States passed a law that mandated the use of boxes for tobacco producers, which was part of a broader effort to regulate the tobacco industry and generate revenue for the war effort. Humidors, which are moisture-controlled storage boxes that allow a cigar enthusiast to store, organize and preserve a larger collection of cigars, were very popular accessories during the early 1900s onward.

As the use of cigar boxes and humidors became widespread, all kinds of options materialized over the years, with particularly vibrant editions of these decorative objects emerging during the Art Nouveau, mid-century modern and other eras. Visionary designers like Isamu Noguchi popularized the idea of tobacco accessories as art with projects such as his decorative ashtrays.

Today, not unlike antique and vintage ashtrays, cigar boxes are more than practical objects. In fact, there are many uses for an old cigar box even after the cigars are gone. They can be used as planters, tissue boxes or can support your long-delayed effort to organize your sewing and craft supplies. During the Great Depression, an emptied cigar box — perhaps a walnut Art Deco-style cigar box with inlays in bronze and hand-carved decorative geometric patterns adorning its exterior — was occasionally repurposed as a jewelry box.