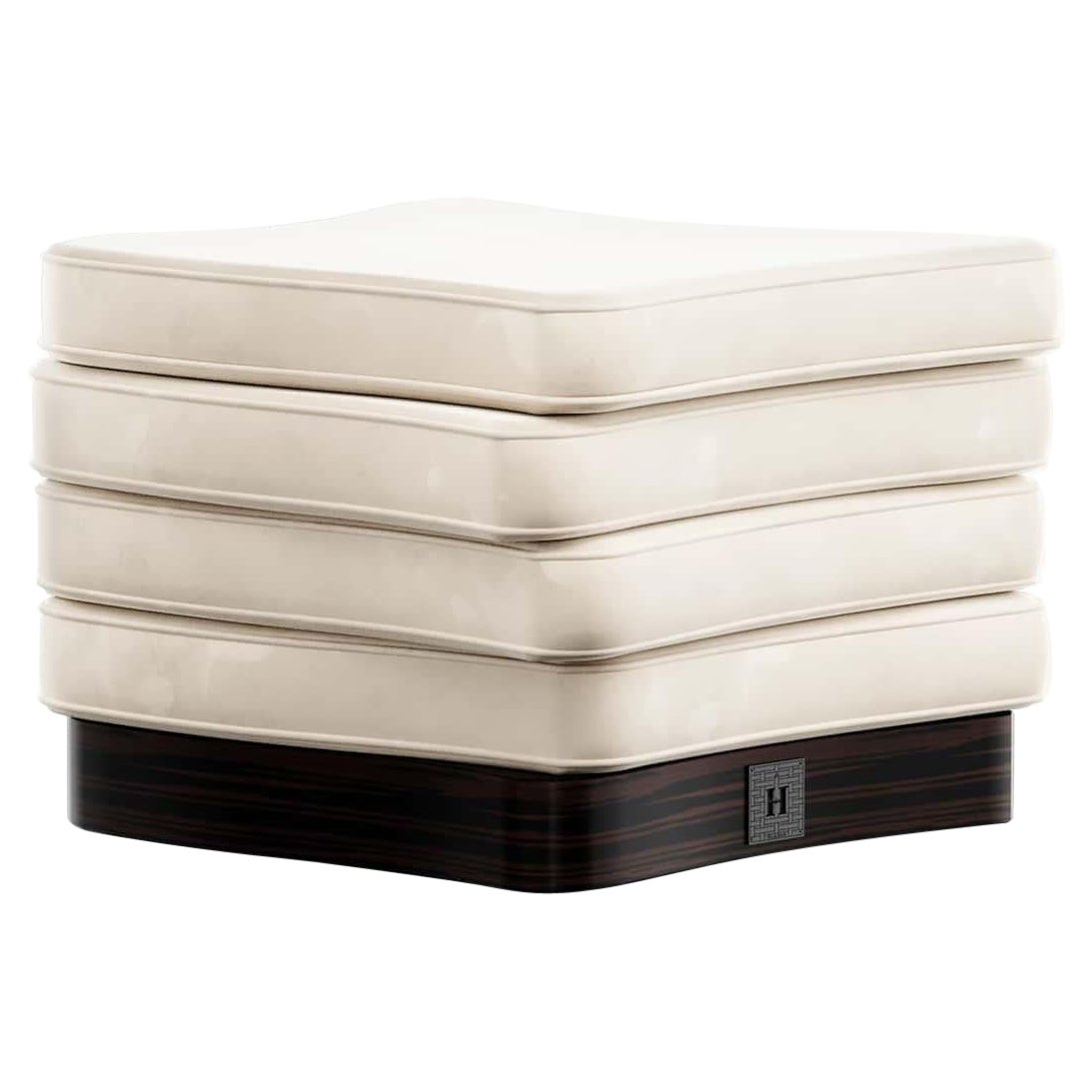 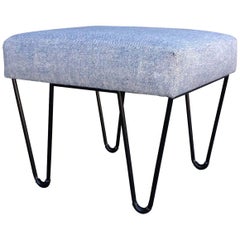 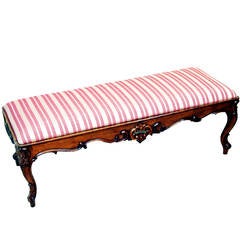 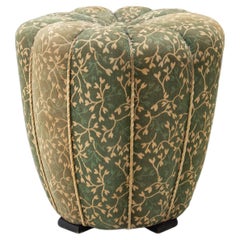 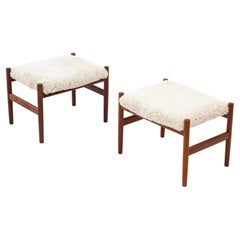 Set of Two Mid Century Mustard Yellow Flowers Stools, Poland, 1970s
Located in 05-080 Hornowek, PL
Space Age style plastic stools were made in Poland by Krynwald ERG fabric around the 1960s-1970s. The futuristic shape is tapered and aerodynamic, with a tulip foot and an yellow mus...
Category

Classic Style Gilded and Ebonized Bench, Upholstered in Faux Zebra Cowhide
Located in San Francisco, CA
This ottoman was hand crafted in the Neo Classic Style, and is striking in it's simplicity and choice of finishes and material. In the visual arts the European movement called "...
Category

Set of 2 Footstool Aged Brass Steel & Black Leather, Contemporary Style
By Jover + Valls
Located in Alcoy, Alicante
The Wanderlust contemporary ottoman and footstool belongs to a collection of minimalist and serene pieces where exclusivity and precision are shown in small details such as the hand-...
Category

Pair of Easy Chairs with Ottomans in Oak

Stella Stool
By Mambo Unlimited Ideas
Located in Lisbon, PT
This elegant stool named Stella is unique in its conception. Format enhanced by the piping details, where different textures are coordinated. The top offers a perfect surface for cre...
Category

Pair of Anglo, Indian Foot Stools
Located in West Palm Beach, FL
The foot stools are clad in metal and well defined and detailed. They are accented with dramatic tiger paw form feet. The frame work is wood.
Category

Mid-Century Yellow-Gray Pattern Velvet Vintage Stool, Edmund Homa, 1960s
Located in 05-080 Hornowek, PL
Stool from the turn of the 1960s. The stool consist of an upholstered part, a seat and wooden legs narrowing downwards, characteristic of the 1960s style. Stool was designed by Ed...
Category

Poufs or Ottomans in the Style of Karl Springer

1 of 2 New Old Stock Liberty's London Omersa Style Leather Horse Pony Footstools
By Omersa, Liberty of London
Located in GB
We are delighted to offer for sale 1 of 2 new old stock Vintage Liberty’s London Omersa style brown leather horse or pony footstools This sale is for one with the option to buy tw...
Category

Pair of Mid-Century Wood Slab Stools
Located in Los Angeles, CA
A pair of unique wood slab footstools crafted out of walnut wood and features a walnut and ebonized color combination with a lacquered finish. The stools have a free-form top sitting...
Category

De Sede DS-9087 Patchwork Poofs, Switzerland, 1970
By De Sede
Located in Roosendaal, Noord Brabant
Large lot of square seating poofs model DS-9087 designed and manufactured by De Sede, Switzerland, 1970. Fantastic design by De Sede who wanted to work on a design where they can use...
Category

Antique Country French Stool
Located in High Point, NC
A charming stool from the French countryside. The unique patina plunges us into the provincial days, where time stretches during long afternoons.
Category

Swedish Gustavian Round Stool
Located in Hollywood, FL
This is a Swedish Gustavian round stool, it has been restored and painted with milk paints "Oyster White". Seating recovered in Muslin. The seat spins around
Category

Sculpted Mahogany Tripod Stools after Adolf Loos, Set of Four
Located in Denton, TX
Three legged tractor style seated stools in the style of Adolf Loos. The seats are sculpted of one piece of mahogany.
Category

Pantalon, Contemporary Pouf Footstools by Vito Nesta
By Vito Nesta
Located in Milan, IT
This pouf will make a bold statement in any modern or traditional interior thanks to its meticulous silk detailing. The Rococo-inspired motifs drawn from botanical art, including flo...
Category

Set of Two Black and Blue Velvet 20th Century Stools, 1960s
Located in 05-080 Hornowek, PL
Stools from the turn of the 1960s and 1970s. Beautiful velour upholstery in 2 different colors. The stools consist of an upholstered part, a seat and wooden legs narrowing downwards,...
Category

Pair of Wooden, Brutalist Side Side Tables - Rustic Wooden Stools.
Located in Schellebelle, BE
Beautiful pair of Wooden Stools/Tables in a bleached SUAR wood, Great blond/greyish patina and a warm and worn finish of the wood, Can be used as tables or stools, multifunctional ...
Category

Pair of Wooden, Brutalist Side Side Tables - Rustic Wooden Stools.

Footstool Black Smoke Steel & Natural Tobacco Leather, Contemporary Style
By Jover + Valls
Located in Alcoy, Alicante
The Wanderlust contemporary ottoman and footstool belongs to a collection of minimalist and serene pieces where exclusivity and precision are shown in small details such as the hand-...
Category

Eames 671 Ottoman for Lounge Chair 670 in Black Leather
By Charles and Ray Eames, Herman Miller
Located in Little Burstead, Essex
These two were bought together new in the early 70's and are both the rectangular cushion clips as is appropriate for the era.The leather is black and in good condition for the date.
Category

Antique and vintage footstools might add a dose of fun to your living room, but they’re also hard workers.

Even as they’ve morphed into objects with plenty of functions over time, the footstool has a royal past. In Ancient Egypt, a footstool was used to climb onto an elevated chair or placed under someone’s feet as he or she was seated in a temple or private residence. Footstools were also in use during the Ottoman Empire. In fact, the ottoman, an upholstered seat or small bench that initially had no back or arms, was the main seating furniture in a home. Ottomans were a way to merge floor seating with cushions and mats.

Poufs, which originated in France, are also thought of as convenient seating furniture as well as occasionally serving as a side table, if needed. (Although, a pouf is typically not as firm as an ottoman.)

Over the years, footstools have taken on varying purposes. They have been used as small portable chairs, for example.

During the 18th century, a footstool might have been long with a low profile, which rendered it perfect for fireside seating. Victorian footstools were small but not unassuming, as furniture makers of the era would upholster the pieces so that they paired with the nearby sofa or wingback chairs. Footstools have even become a storage solution at home, with designers outfitting them with compartments. Today, a footstool might be used to organize quilts and blankets or other textiles, especially if you’re trying to keep things uncluttered in a small apartment.

Footstools are now available in all sorts of provocative colors, upholstery and more. No one is going to put a velvet footstool out on the curb, right? When shopping for your own footstool, try to find one that meets the height of your sofa or other seating (or is a tad lower). It should also be sturdy but not a heavy, clunky piece that’s a chore to move around.

The footstool is both decorative and functional. Not unlike a good throw pillow, interior designers have found numerous uses for this versatile, vibrant furnishing. Find yours in the growing collection of antique and vintage footstools today on 1stDibs. 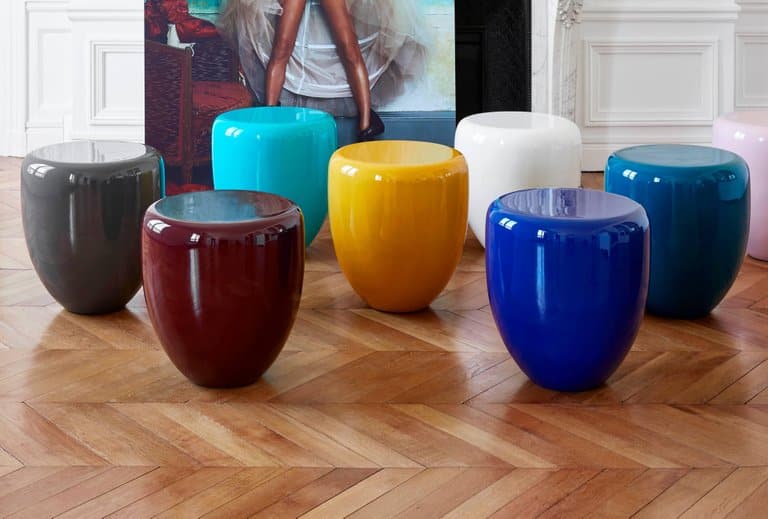 How Designers Use Stools in Unexpected Ways

Form and function collide in these little workhorses.