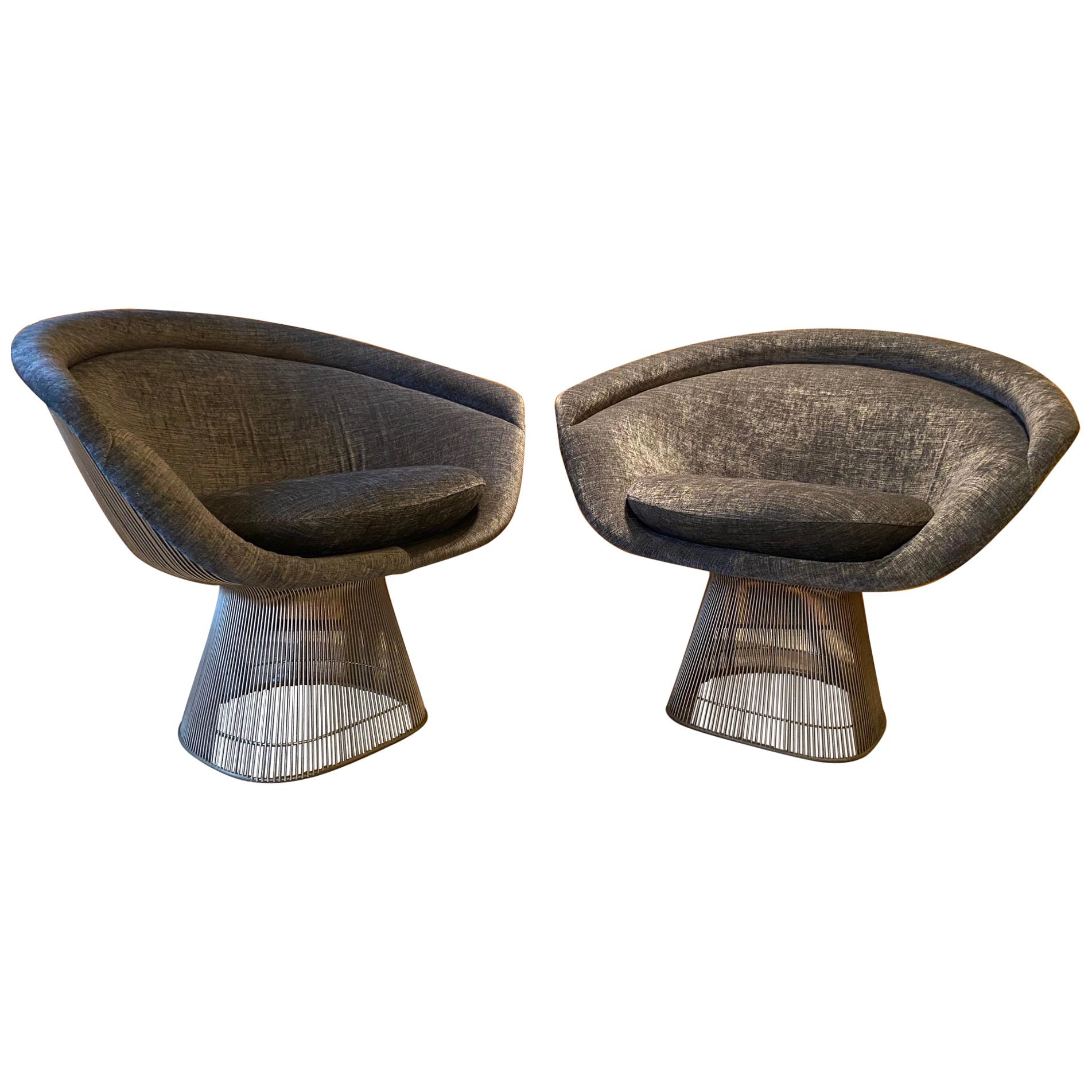 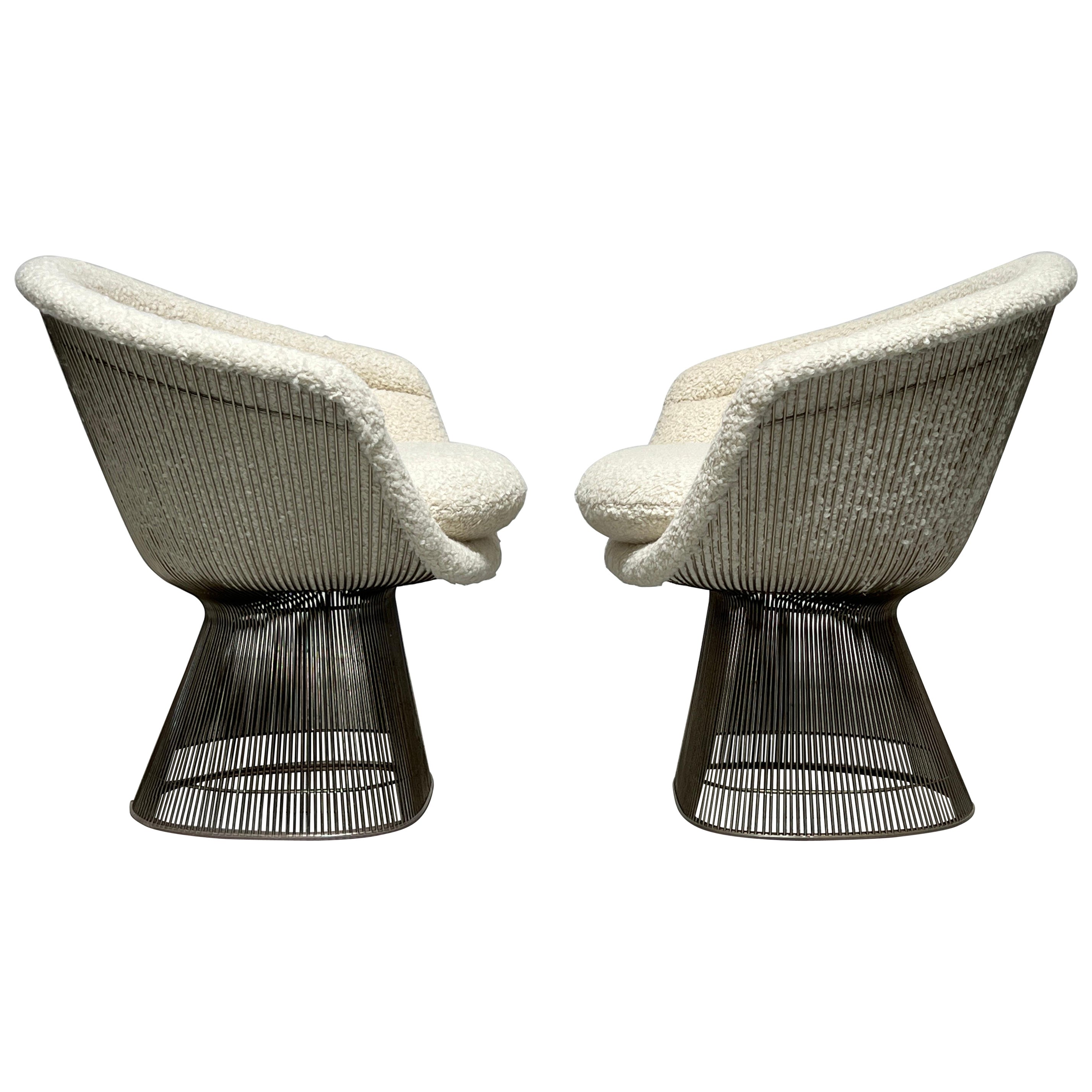 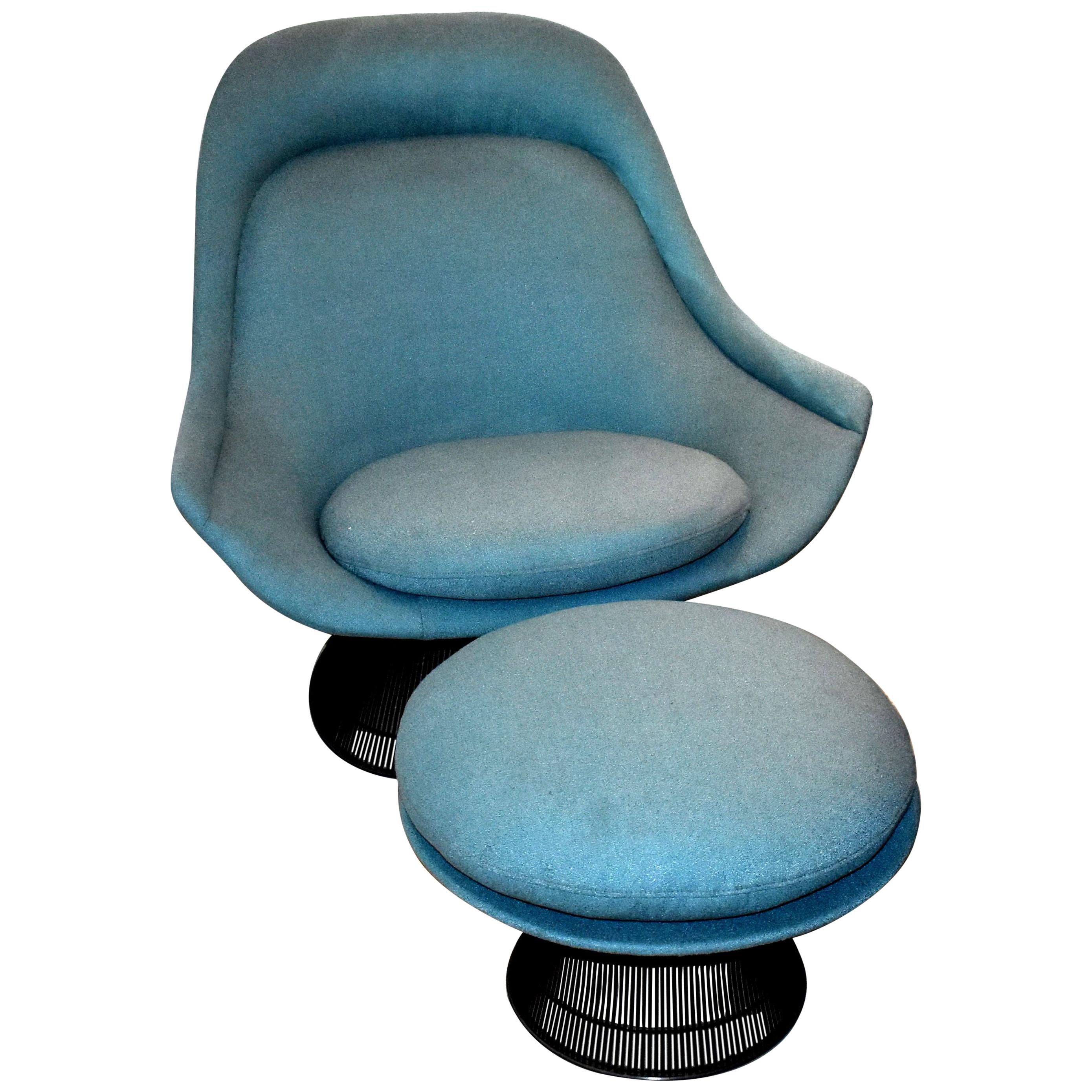 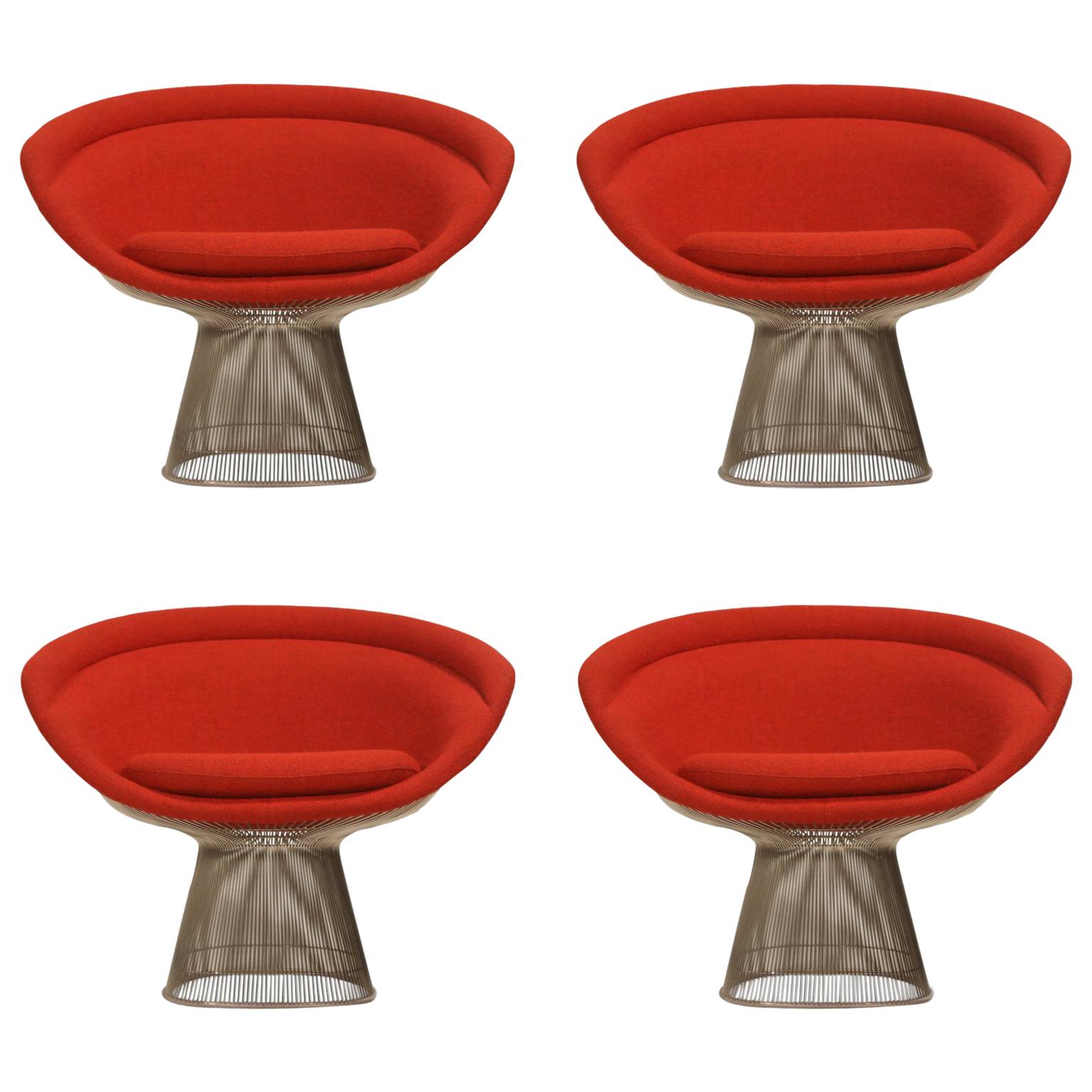 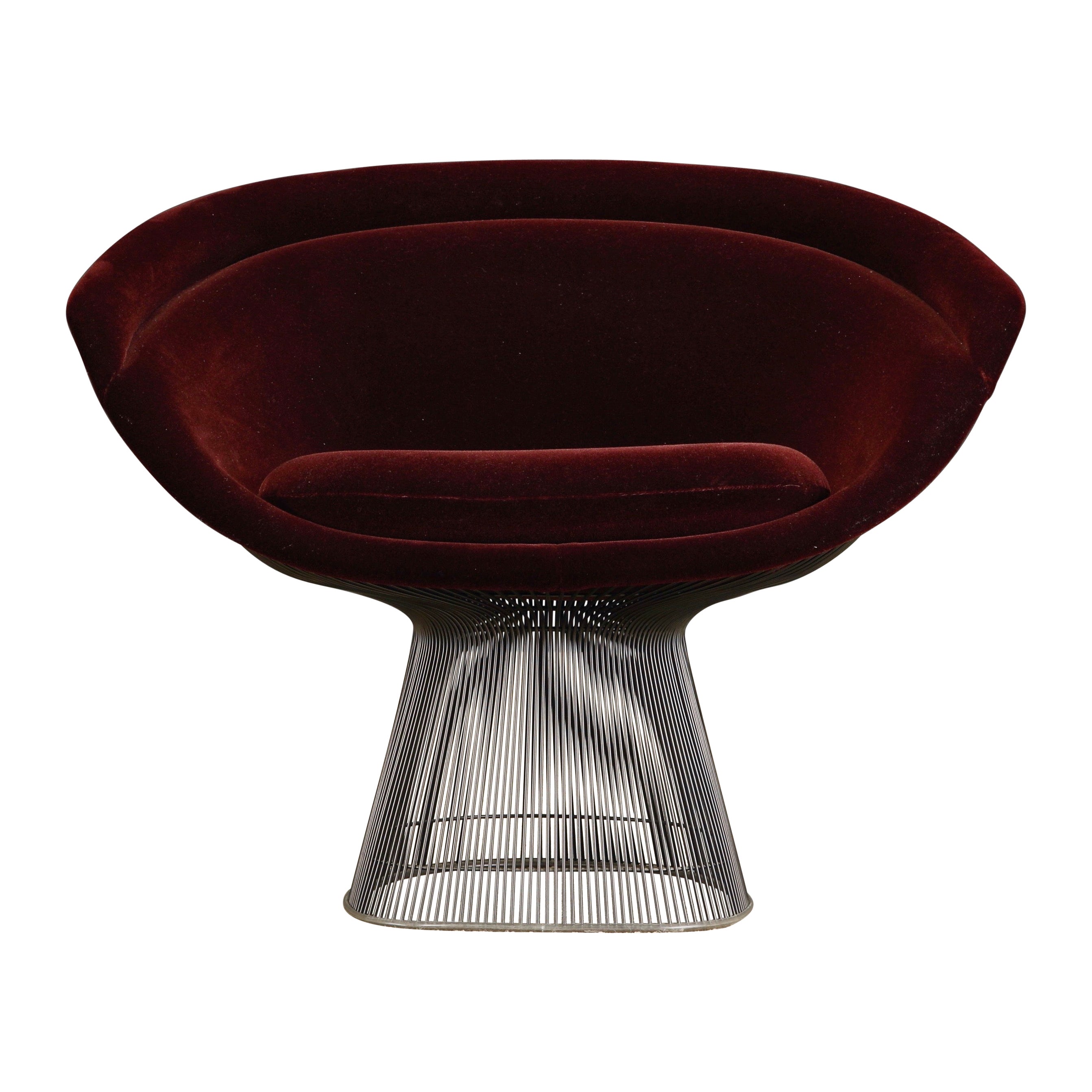 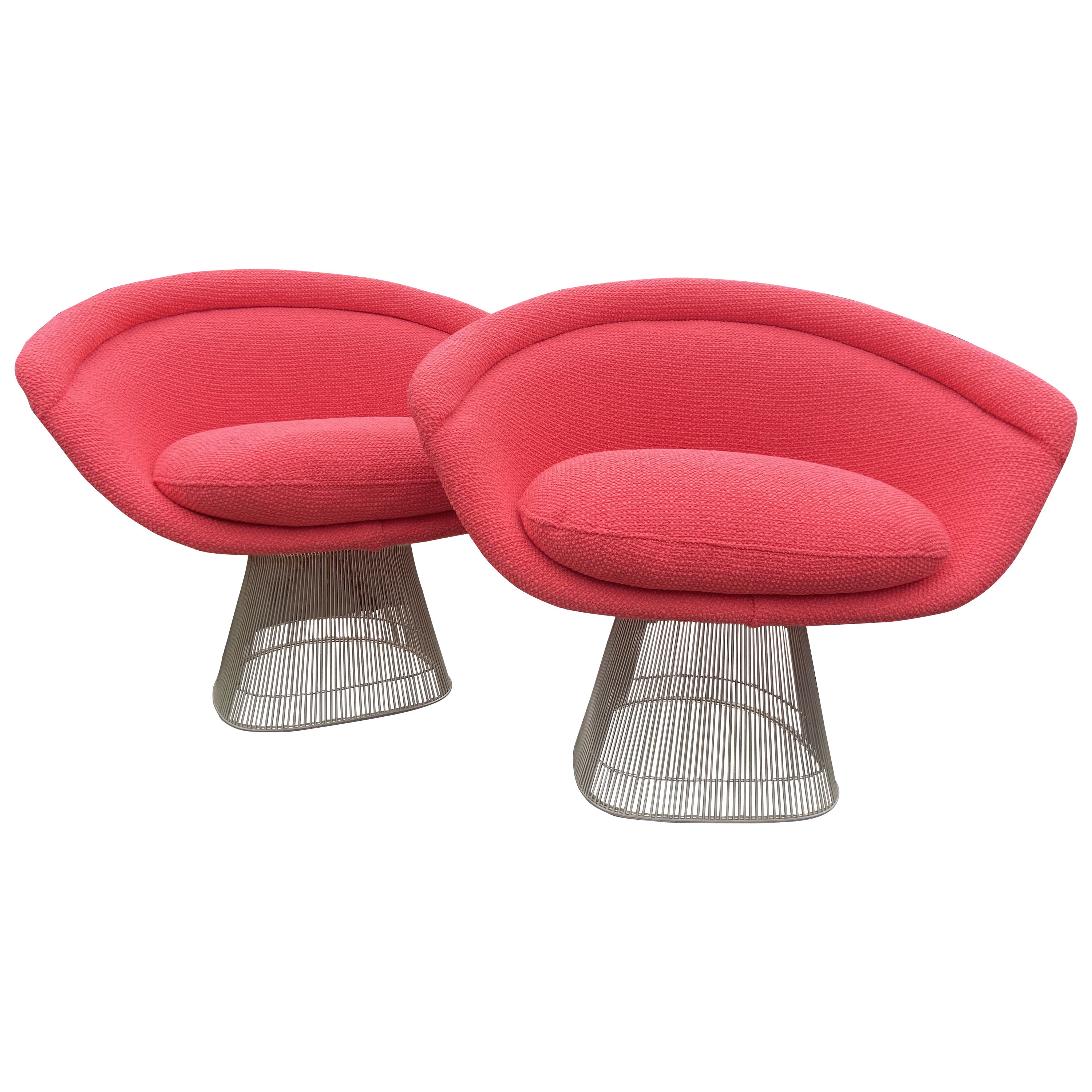 Set of Four Lounge Chairs by Warren Platner for Knoll 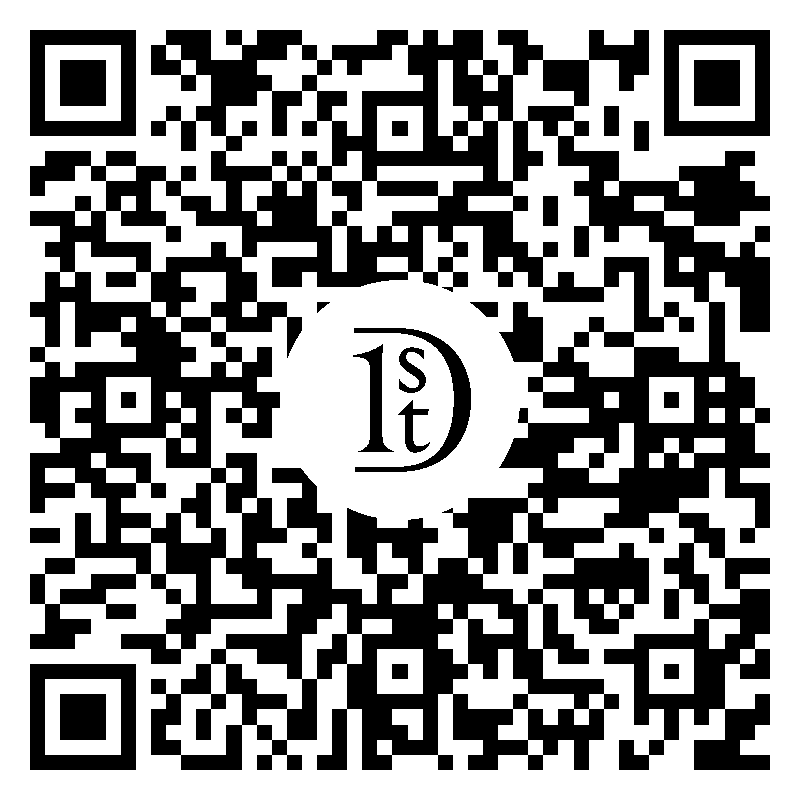 A set of four lounge chairs designed by Warren Platner for Knoll. Nickel plated steel newly upholstered in Holly Hunt / Teddy / Winter White. We are willing to split the set. 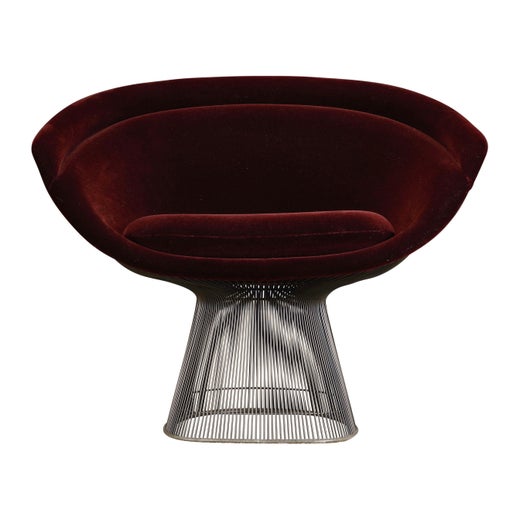 Though his vintage furniture and interiors are icons of mid-century modernism, architect and furniture designer Warren Platner took his stylistic inspiration from as far back as 18th-century France, once saying about his seminal collection for Knoll that his design intent was to evoke “the kind of decorative, gentle, graceful kind of design that appeared in period style like Louis XV.”

Indeed, the marriage of modern sensibility and classical grace is a marker of Platner’s style across furnishings and interiors — both genres in which he left an enduring legacy.

Born in 1919 in Baltimore, Maryland, Platner studied architecture at Cornell before cutting his teeth working for design icons like Eero Saarinen and Kevin Roche, eventually serving as head of interior design in the latter’s office. In 1965, Platner opened his own office, in Greenwich, Connecticut, where he continued to hone his particular brand of graceful modernism.

Knoll released the Platner Collection of seating and tables in 1966. (Originally designed in 1962, the suite took nearly four years of development to bring to life.) The decorative bent-metal-and-glass pieces — an armchair, a dining table and more — make certain nods to the trademarks of his former employers, but also to the shapes of historic European furniture. The sculptural elegance of his line recalls Saarinen’s iconic Tulip collection, which includes armchairs and dining tables, while his materiality aligns with Roche’s cutting-edge use of glass and metal for the headquarters of the Ford Foundation in New York.

Many of Platner’s Knoll pieces would go on to find homes in a certain fabled locale: the Windows on the World restaurant at the original World Trade Center, whose interiors Platner was tapped to outfit in the mid-1970s. Upon the opening of the restaurant in 1976, New York Times architecture critic Paul Goldberger dubbed its style “sensuous modernism” — an apt tagline for Platner’s oeuvre as a whole.

Platner died in 2006 at the age of 86. His furniture is still produced by Knoll, and original examples — along with idiosyncratic custom works he created for interior design clients — are coveted by collectors today.

1stDibs Buyer Protection Guaranteed
If your item arrives not as described, we’ll work with you and the seller to make it right. Learn More
About the Seller
5.0
Located in Dallas, TX
Recognized Seller
These prestigious sellers are industry leaders and represent the highest echelon for item quality and design.
Platinum Seller
These expertly vetted sellers are 1stDibs' most experienced sellers and are rated highest by our customers.
Established in 1999
1stDibs seller since 2008
399 sales on 1stDibs
Typical response time: 1 hour
More From This SellerView All
You May Also Like