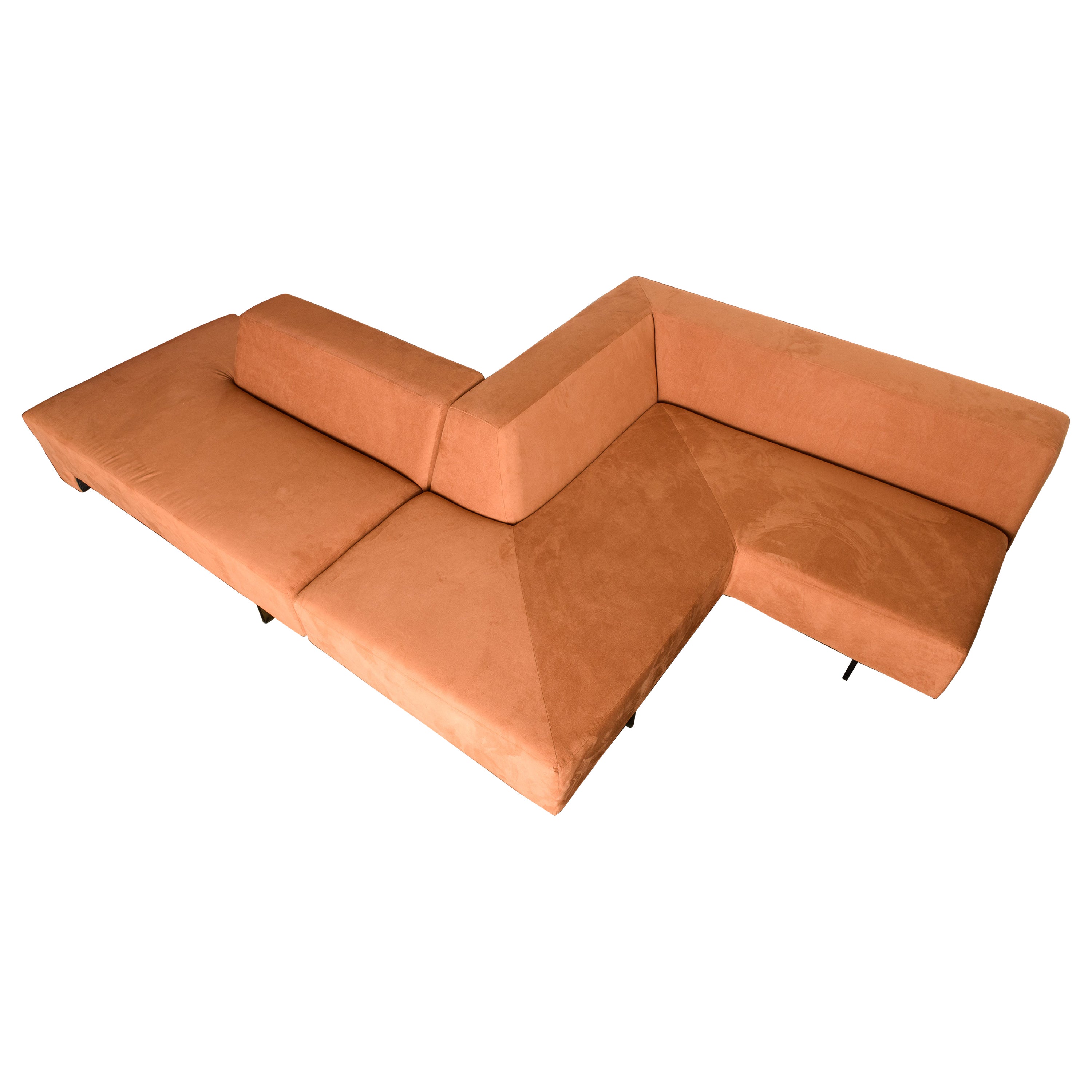 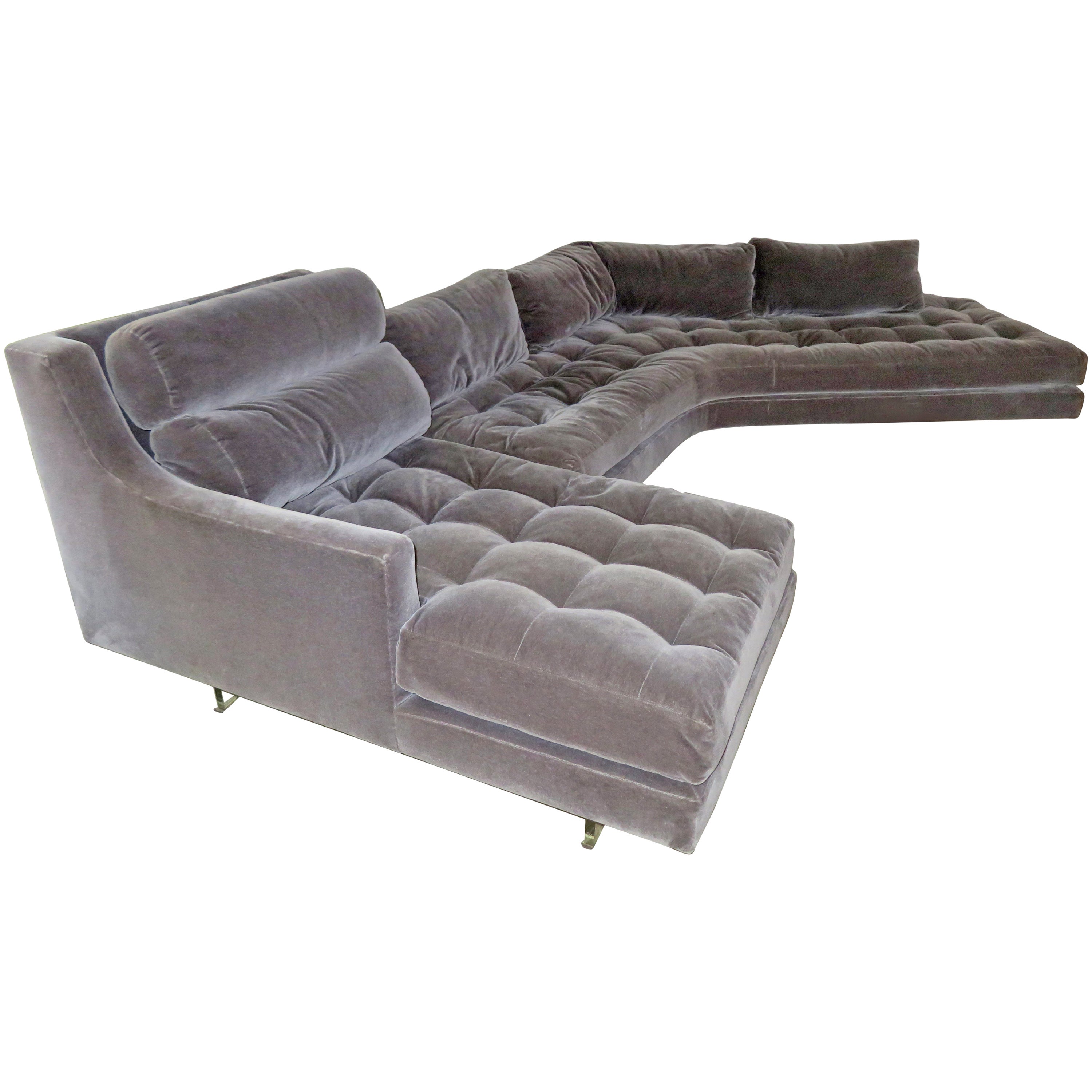 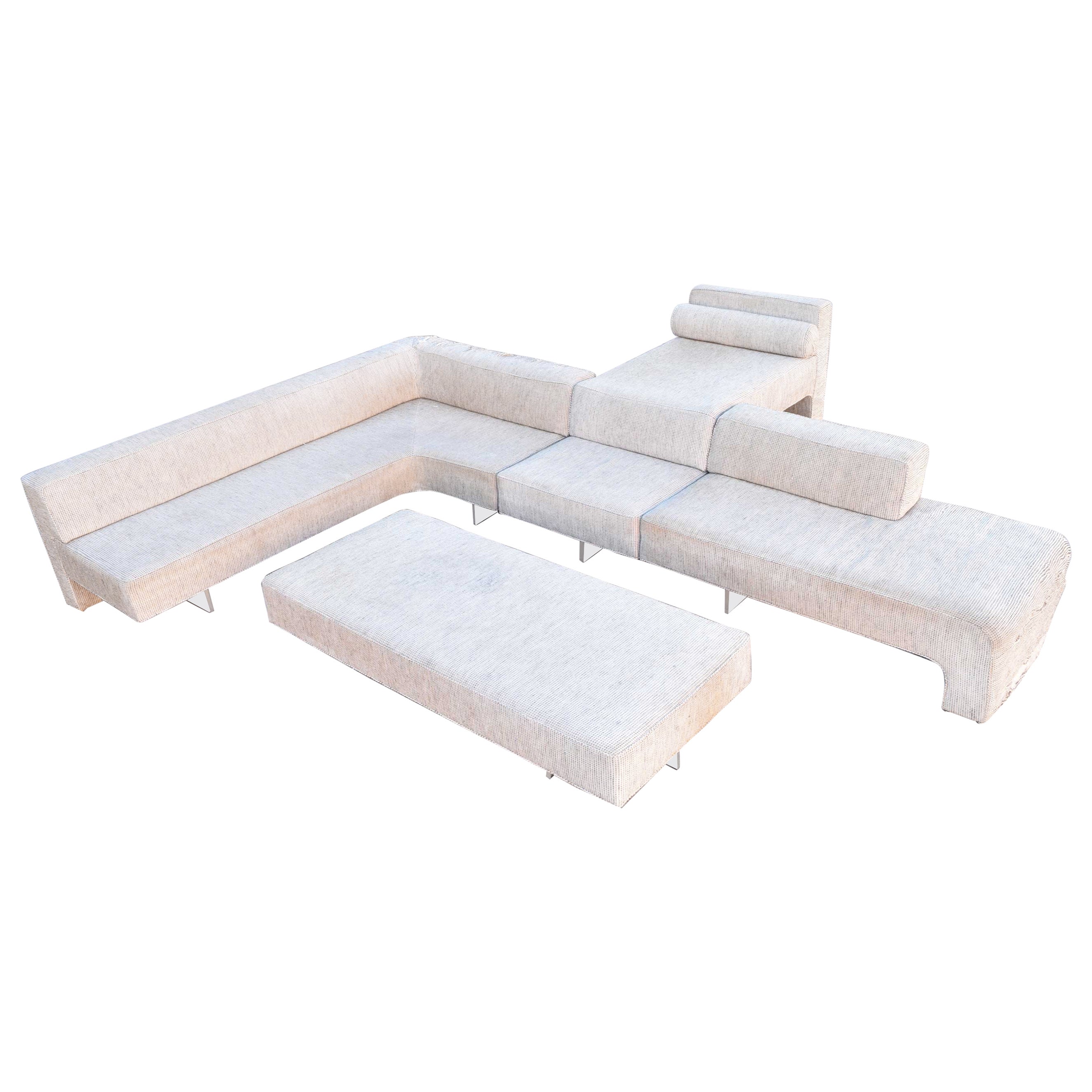 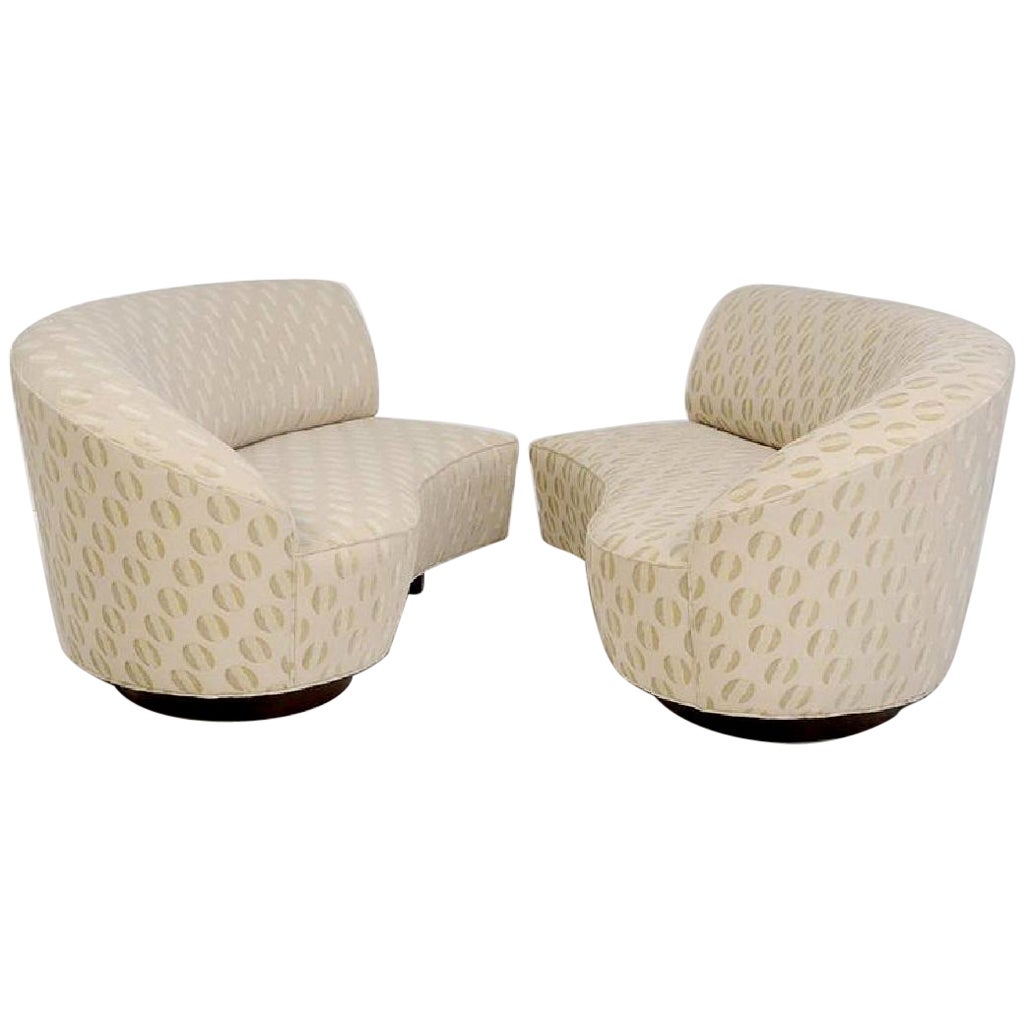 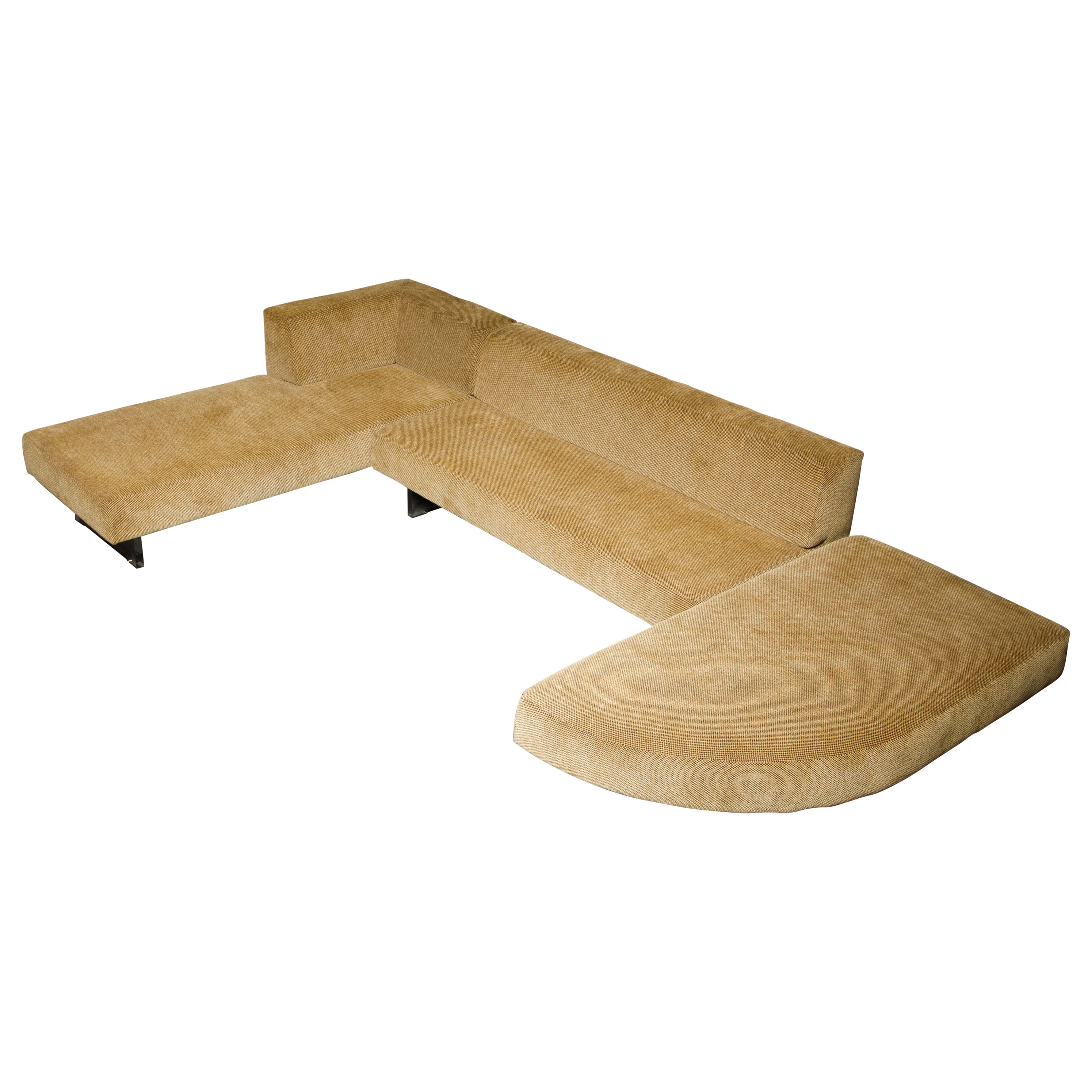 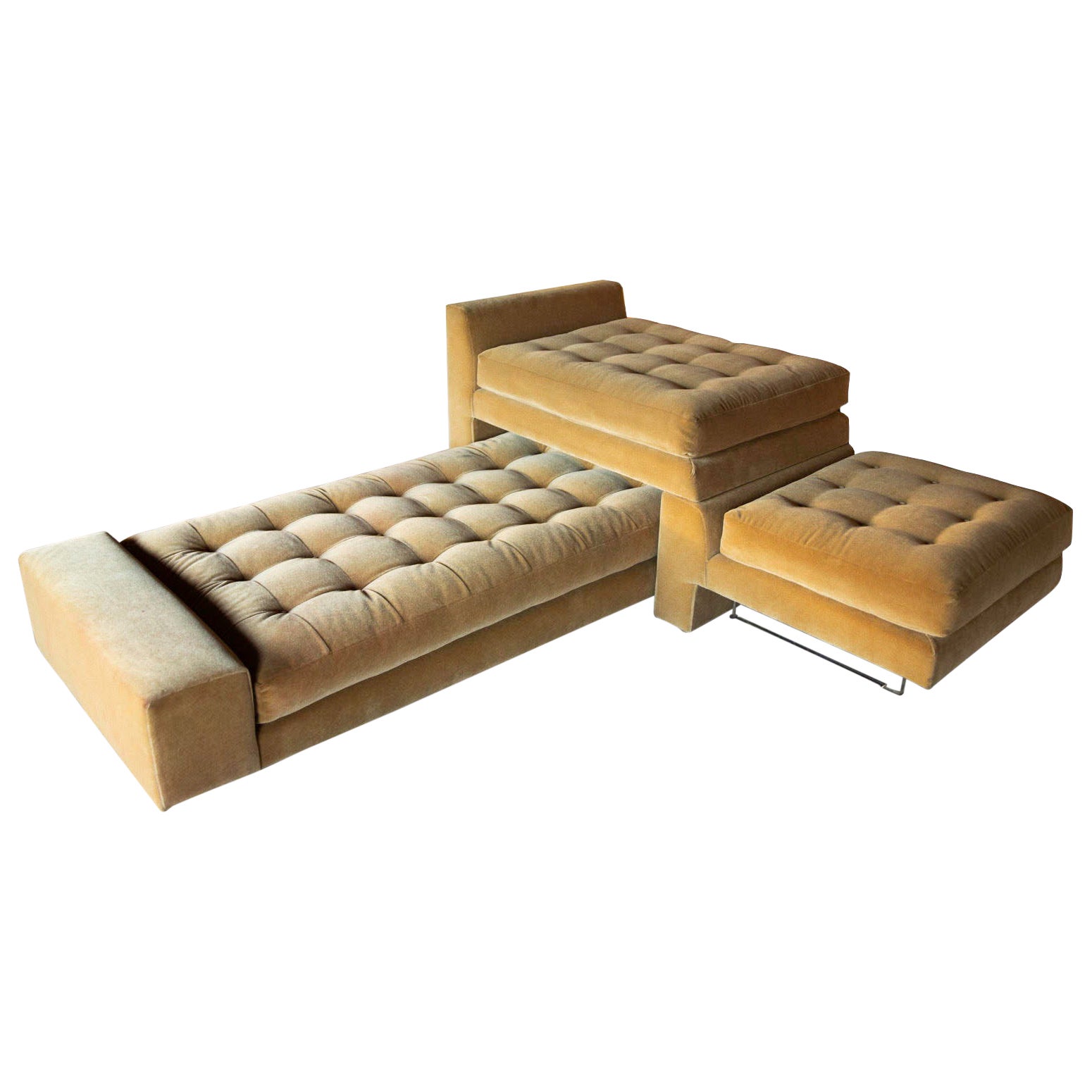 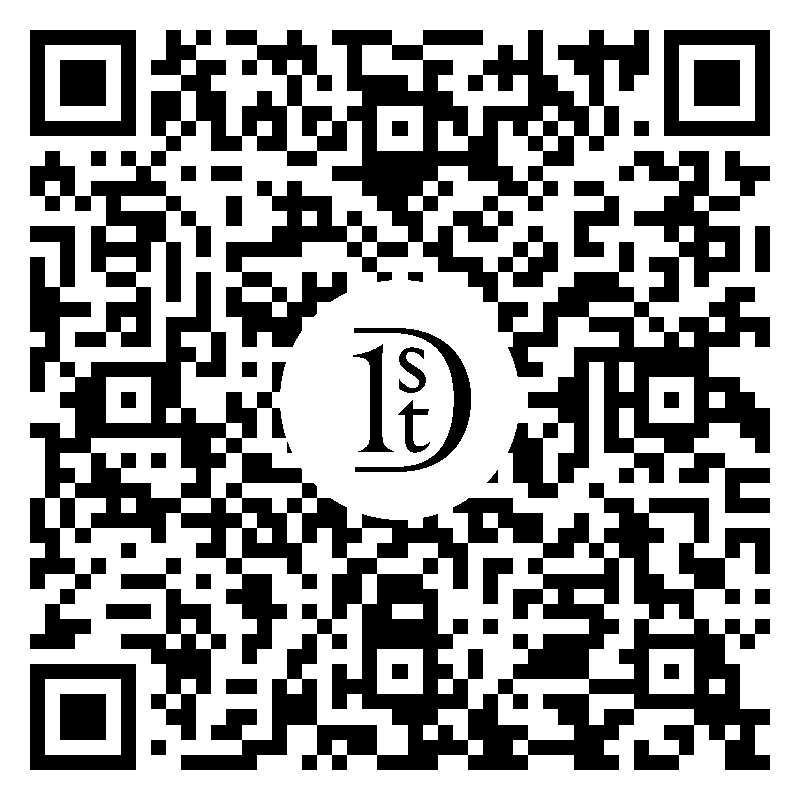 The sectional sofa with Lucite supporting legs features three units, a right arm section, a middle corner return and an ottoman. Plush cushions and all upholstered body. One of the iconic design by Vladimir Kagan in the 1970s disco era. The sofa has been completely restored with new foam and re-upholstered in a ultra luxury all wool pinstripe fabric by Designtex England. It has a versatile configuration with the ottoman functions as an extension of the chaise lounge or an coffee table. The size of each section is the following: the armed section is 52 W x 32 D x 26 H; the corner unit is 58 W x 58 D x 26 hand the ottoman is 32 W x 32 D x 19 H.

The pioneers of modern furniture design in America in the mid-20th century all had their moments of flamboyance: Charles and Ray Eames produced the startling, biomorphic La Chaise; George Nelson’s firm created the Marshmallow sofa; Edward Wormley had his decadent Listen to Me chaise. But no designer of the day steadily offered works with more verve and dynamism than Vladimir Kagan. While others, it seems, designed with suburban households in mind, Kagan aimed to suit the tastes of young, sophisticated city-dwellers. With signature designs that feature sleekly curved frames and others that have dramatic out-thrust legs, Kagan made furniture sexy.

Kagan’s father was a Russian master cabinetmaker who took his family first to Germany (where Vladimir was born) and then to New York in 1938. After studying architecture at Columbia University, Kagan opened a design firm at age 22 and immediately made a splash with his long, low and sinuous Serpentine sofa. Furniture lines such as the Tri-symmetric group of glass-topped, three-legged tables and the vivacious Contours chairs soon followed.

Kagan’s choices of form and materials evolved through subsequent decades, embracing lucite, aluminum and burl-wood veneers. By the late 1960s, Kagan was designing austere, asymmetrical cabinets and his Omnibus group of modular sofas and chairs. For all his aesthetic élan, Kagan said that throughout his career, his touchstone was comfort. “A lot of modern furniture was not comfortable. And so comfort is: form follows function. The function was to make it comfortable,” he once commented. “I created what I called vessels for the human body.”

A diverse group of bodies have made themselves at home with Kagan designs. Among the famous names who commissioned and collected his designs are Marilyn Monroe, Gary Cooper, Andy Warhol, David Lynch, Angelina Jolie and Brad Pitt, and firms such as Gucci and Giorgio Armani. His work is in numerous museum collections, including those of the Victoria & Albert and the Metropolitan Museum of Art.

Because of its idiosyncrasy, Kagan’s work did not lend itself to mass-production. Kagan never signed on with any of the major furniture-making corporations, and examples of his designs are relatively rare. As you will see from the offerings on 1stDibs, even decades after their conception, Kagan pieces still command the eye, with their freshness, energy, sensuality and wit. 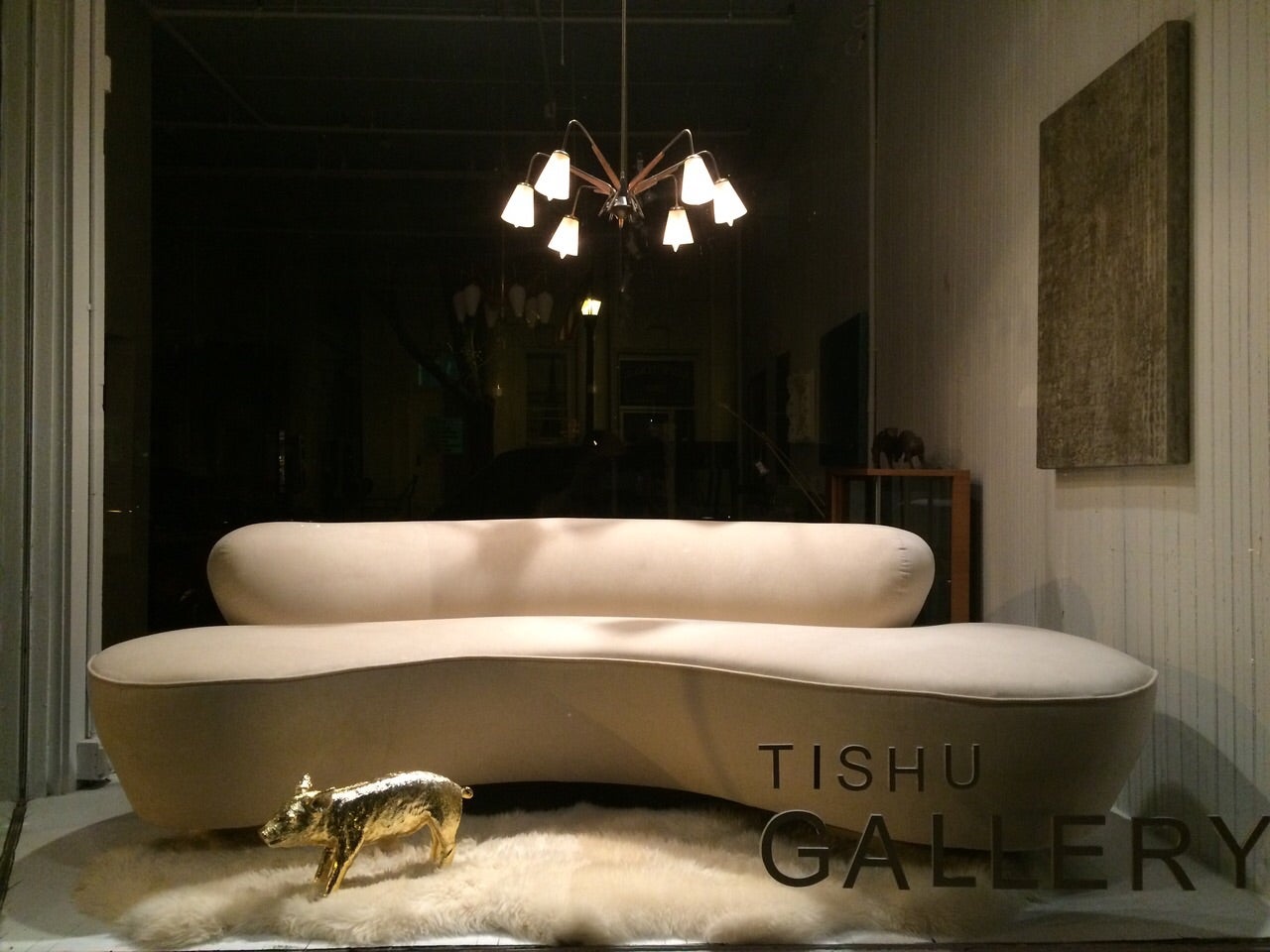 About the Seller
5 / 5
Located in Atlanta, GA
Platinum Seller
These expertly vetted sellers are 1stDibs' most experienced sellers and are rated highest by our customers.
Established in 2006
1stDibs seller since 2010
247 sales on 1stDibs
Typical response time: <1 hour
More From This Seller
View All From Seller

Vladimir Kagan 'Omnibus' Sectional Sofa with Lucite Legs, 1970s
By Vladimir Kagan
Located in Los Angeles, CA
This incredible large sectional sofa is by Vladimir Kagan, called the 'Omnibus' seating system. Designed in the 1960s, the Omnibus has remained as one of the most prolific and unique...
Category

$28,000
Vladimir Kagan Three Piece 'Omnibus' Sectional Sofa with Lucite Legs, Signed
By Vladimir Kagan
Located in Los Angeles, CA
This incredible sectional sofa is by Vladimir Kagan, called the 'Omnibus' seating system. Designed in the 1960s, the Omnibus has remained as one of the most prolific and unique secti...
Category