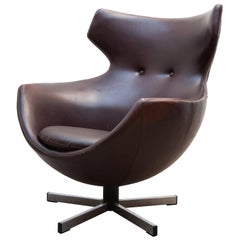 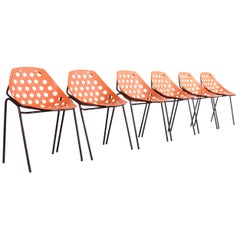 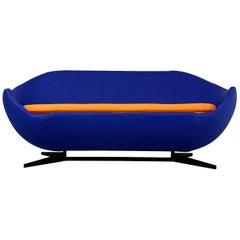 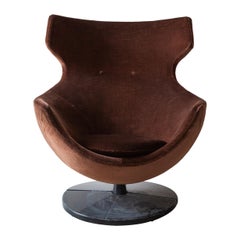 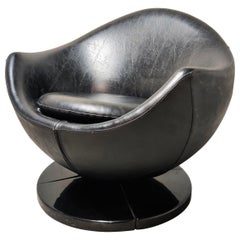 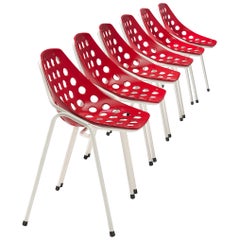 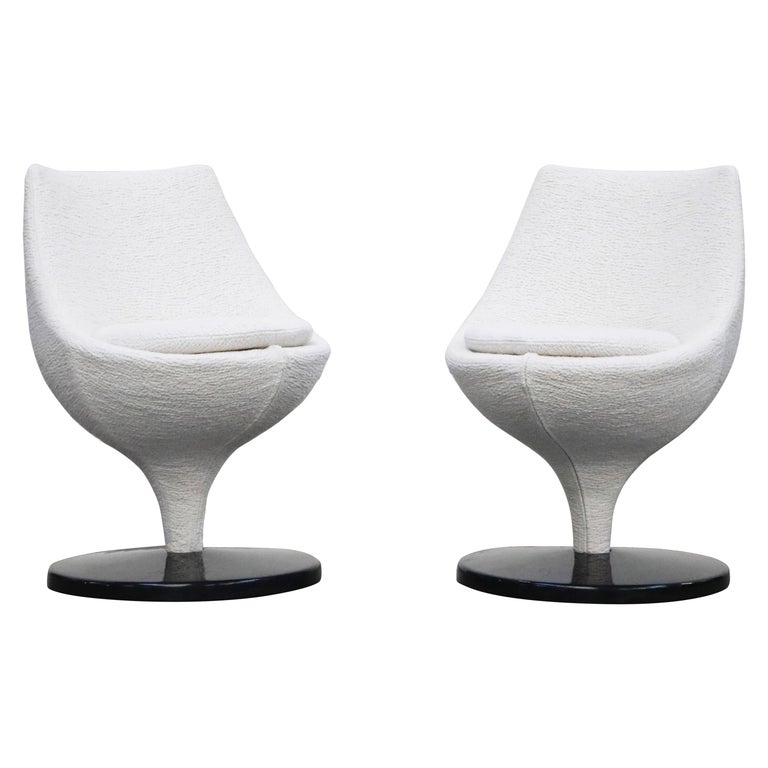 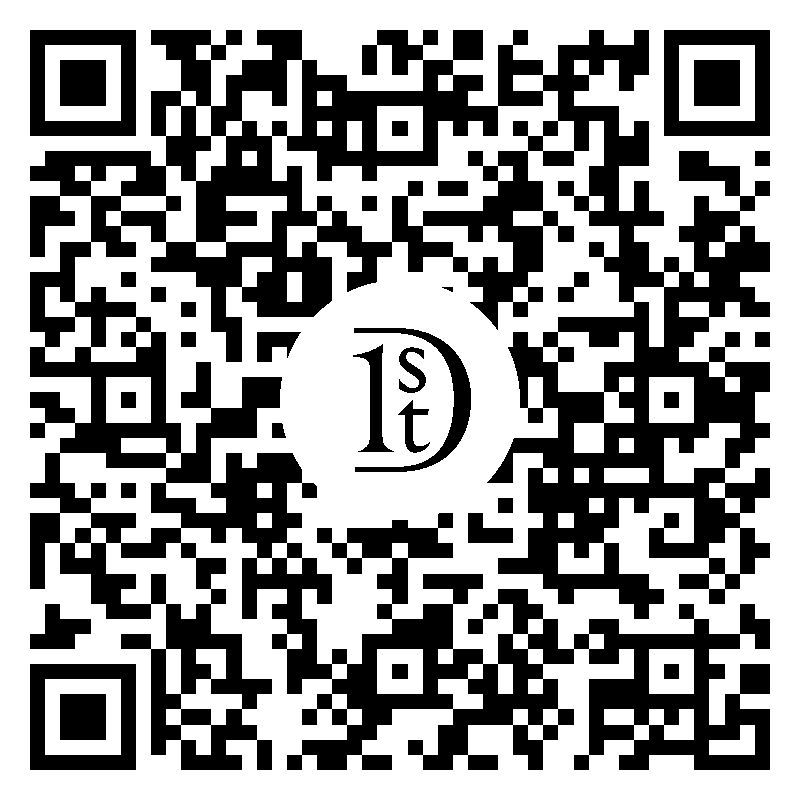 A pair of beautiful Pierre Guariche for Meurop circa 1965 'Polaris' swivel chairs in a highly textured white boucle fabric and black fiberglass base. Pierre Guariche, a French designer and Meurop a Belgian maker. Recently reupholstered, in showroom condition (see condition details below for greater detail), and ready to be used in a high-end interior designer project. These white boucle 'Polaris' chairs by Pierre Guariche for Meurop would work great in a Mid-Century Modern, Scandinavian Modern or Danish modern home or penthouse apartment but could also look fantastic in a Contemporary or Postmodern room. Also consider mixing it up in a Traditional, Transitional, Classical or Art Deco room with a splash of juxtaposition. Would also be an apt choice in a commercial project such as a hotel lobby lounge or members club, creative design studio or high-rise executive office. Consider using as side chairs, dining, cafe or breakfast table chairs, bedside chairs, fireside chairs, dressing or changing room chairs, hallway chairs, entryway or mudroom chairs, nursing or reading chairs, conference room chairs, office or desk chairs, guest chairs, lobby chairs, lounge chairs or occasional chairs ideal in virtually any setting. About the designer: The architect Pierre Guariche (1926–1995) was one of the leading modern furniture and lighting designers of postwar France. Guariche can, in some ways, be thought of as the French version of Charles Eames: with his lean and angular chairs and slender, sculptural lamps, he helped introduce a new aesthetic to the country’s interiors — and he was an eager Pioneer in the use of new Industrial materials and production techniques that emerged in the 1950s. Belgian furniture manufacturer Meurop is best known for its successful production of 1960s designs by Pierre Guariche (1926-1995), who was one of the most renowned French industrial and interior designers of the mid-20th century. In the early 1960s, Guariche’s designs for Meurop centred around storage items made from plywood, including teak-veneered dining table, buffets, and shelves. Both the shell chair (1961) and the Polaris Chair (1965) marked a new era in Guariche’s career, as he abandoned natural materials such as wood in favor of synthetics and plastics. Referencing Charles & Ray Eames’ iconic side chairs, the shell chair, which was made from a light, yet strong piece of molded plastic, is thought to be representative of both a desire to produce affordable design through mass production, and a response to an increasingly consumerist society. Capturing the zeitgeist of the 1960s, Guariche also created a number of space and astronomically-inspired chairs for Muerop, including the Mars Armchair (1965), Jupiter Armchair (1966), and Luna Armchair (1967), which also referenced apparent shapes seen in Arne Jacobsen's sculptured egg chair (1958). Riding on the coattails of his successful Mars Chair, Gauriche became Artistic Director of Meurop in 1967. Measurements: H 29.25" x W 20.25" x D 20.75" Seat height 18.5" Seat depth 16" Condition: In very good to excellent condition. White boucle fabric was recently reupholstered and is in showroom condition. We looked closely and could not find any noticeable wear but the chairs were reupholstered just prior to our acquisition so may have had some use after reupholstery. Please see photos of boucle, this is not a standard typical boucle, it appears to be a specialty one and is quite nice and very nubby. Plastic base is in very good condition with light wear. Sturdy and sound. Ready to be used immediately.

The architect Pierre Guariche (1926–95) was one of the leading modern furniture and lighting designers of postwar France. Guariche can, in some ways, be thought of as the French version of Charles Eames: with his lean and angular chairs and slender, sculptural lamps, he helped introduce a new aesthetic to the country’s interiors — and he was an eager pioneer in the use of new industrial materials and production techniques that emerged in the 1950s.


Guariche studied at the École Nationale Supérieure des Arts Décoratifs in Paris (the national design academy) under René Gabriel — a designer, known for his quality, mass-produced furnishings, who served as a director of the postwar Ministry of Reconstruction. Two years after graduating in 1949, Guariche opened his own design firm, and he was soon creating pieces for numerous companies, including the lighting manufacturer Disderot.


Wood and metal were rationed in the years following the war and Guariche learned to do more with less. His chairs of the early 1950s include several designs with narrow, softly angular wooden frames; others, like the Tonneau chair, feature a single piece of molded plywood set atop metal legs. His lamps of the period are likely his best-known works. They include delicate compositions of slender steel tubes, and more flamboyant pieces such as the Kite lamp, with its curved metal reflector panel.


Always on the lookout for new materials, Guariche spent several years in the mid-1950s operating a firm making furniture in fiberglass and other plastics, along with Joseph André Motte and others. After 1957 — when Guariche was named head of design for the Belgian company Meurop and given a brief to create stylish, up-to-date chairs and cabinets — he began to look to America for ideas. In the mid-1960s, he produced several lines of deeply upholstered, rounded lounge chairs inspired by the space-age look, and gave them names like Jupiter, Polaris, and Luna. While Guariche always kept pace with his times, throughout his career he showed a consistent talent for producing elegant, eye-catching forms using a minimum of materials.

This dealer is the premier source for early-production originals of hard-to-find 20th-century designs and functional art, serving a range of clients, from celebrities and interior designers to aficionados with modest budgets. Its 20,000-square-foot Los Angeles space is packed with rare examples o...