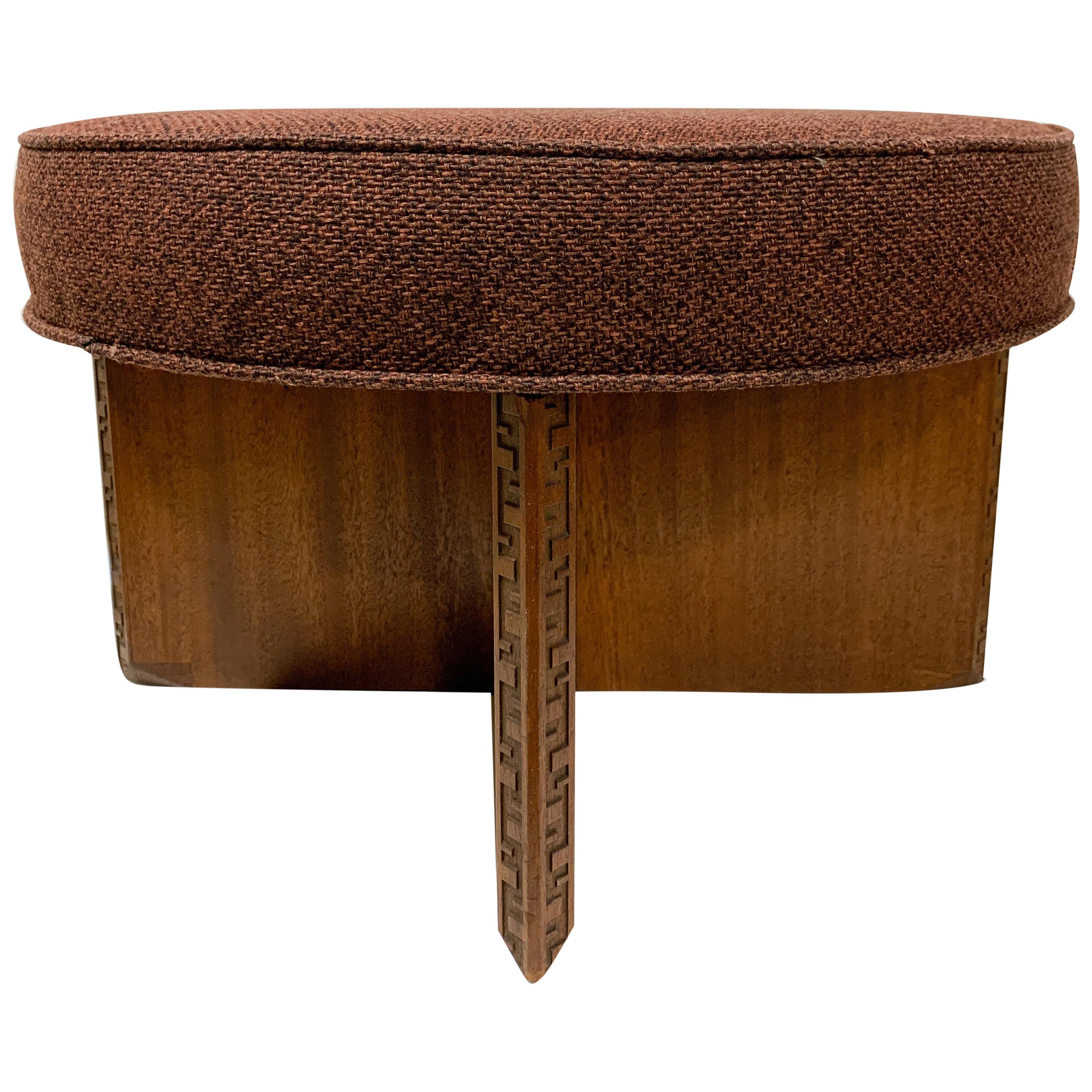 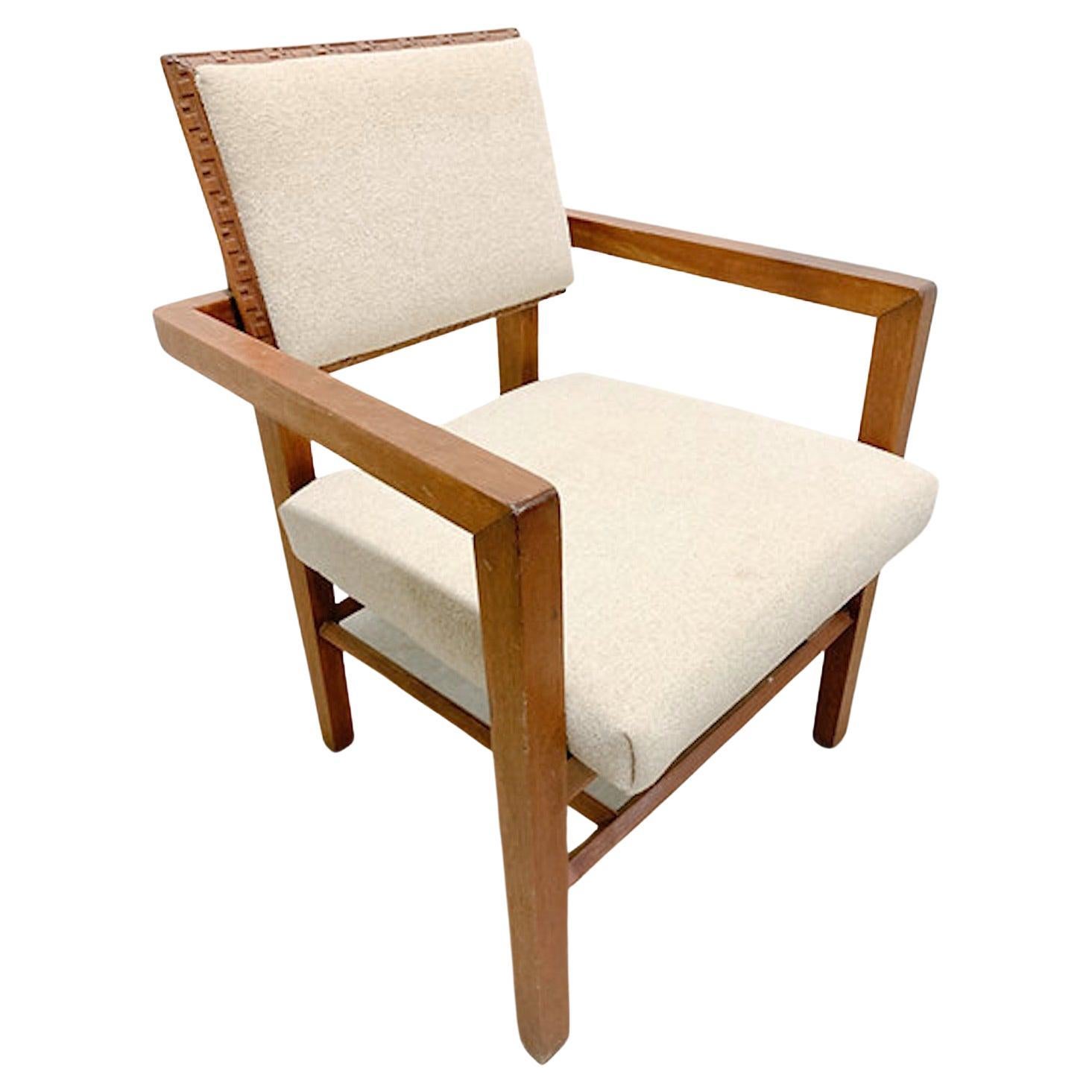 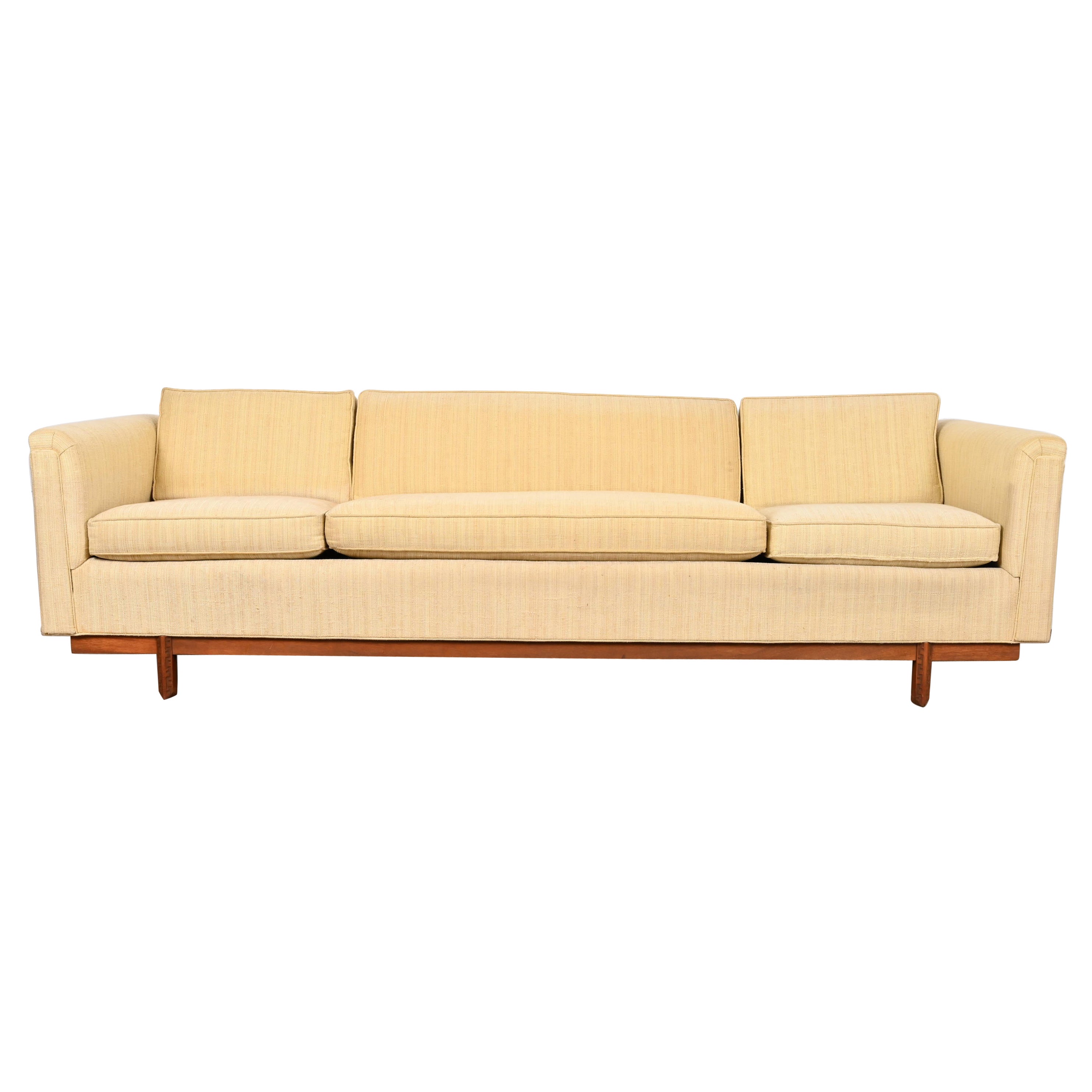 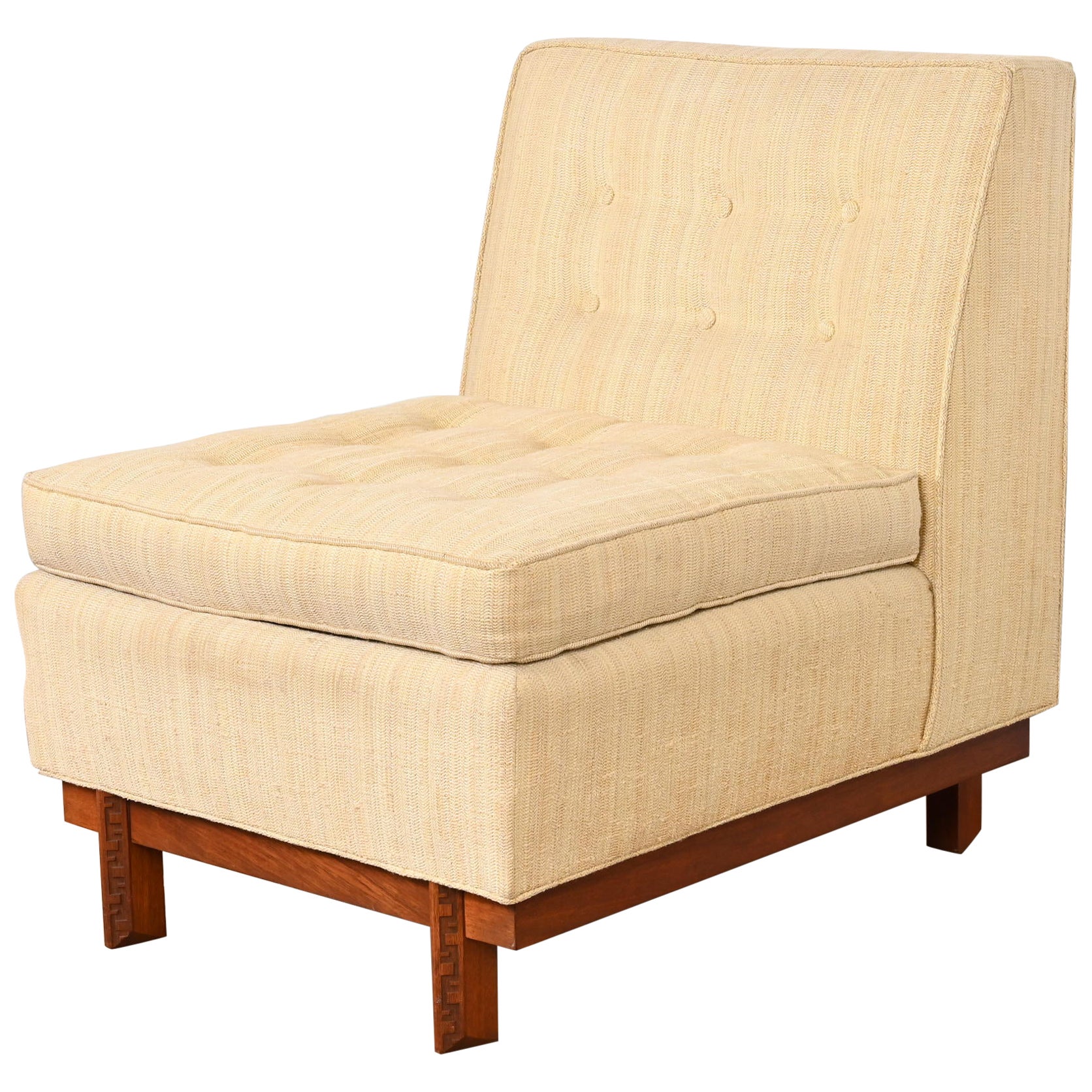 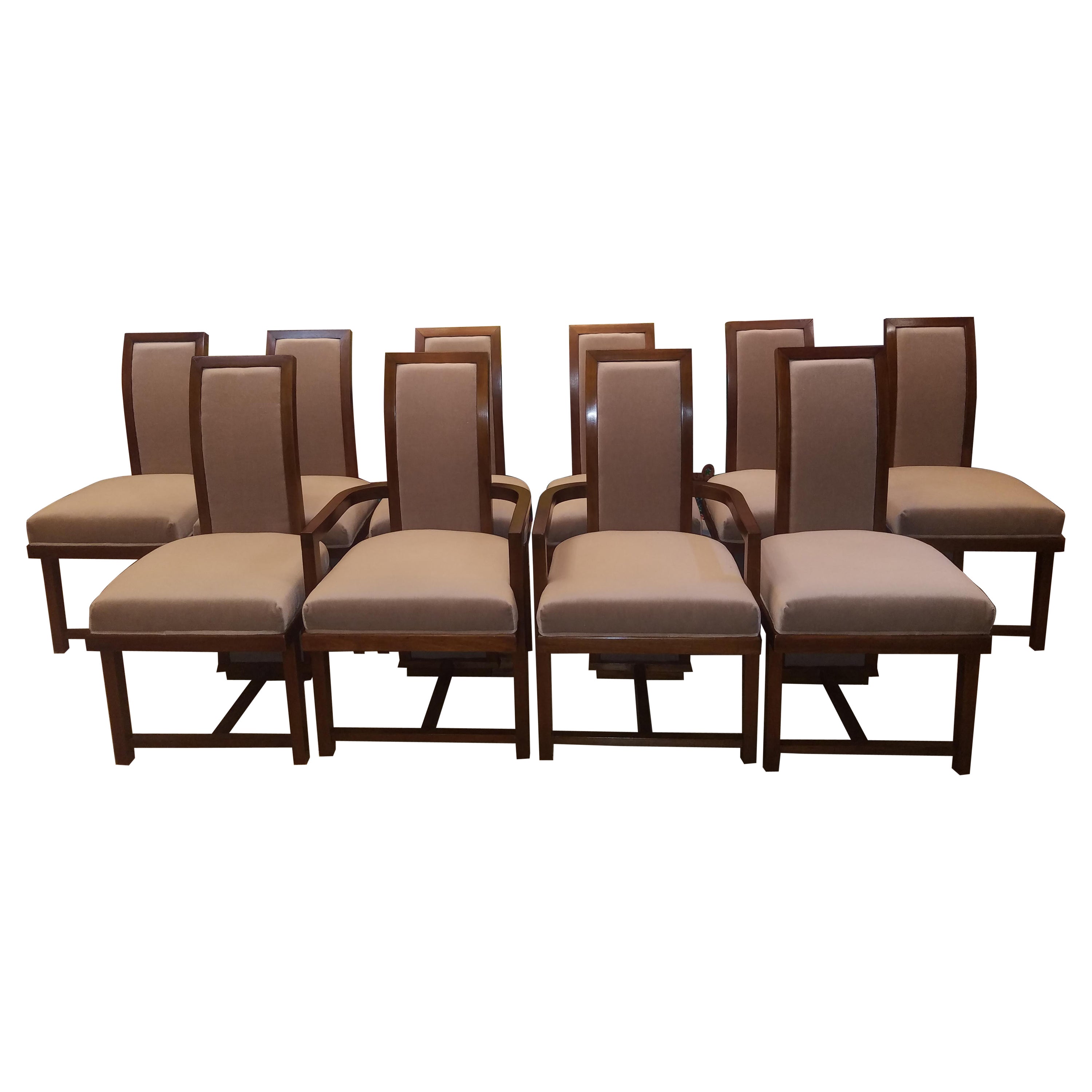 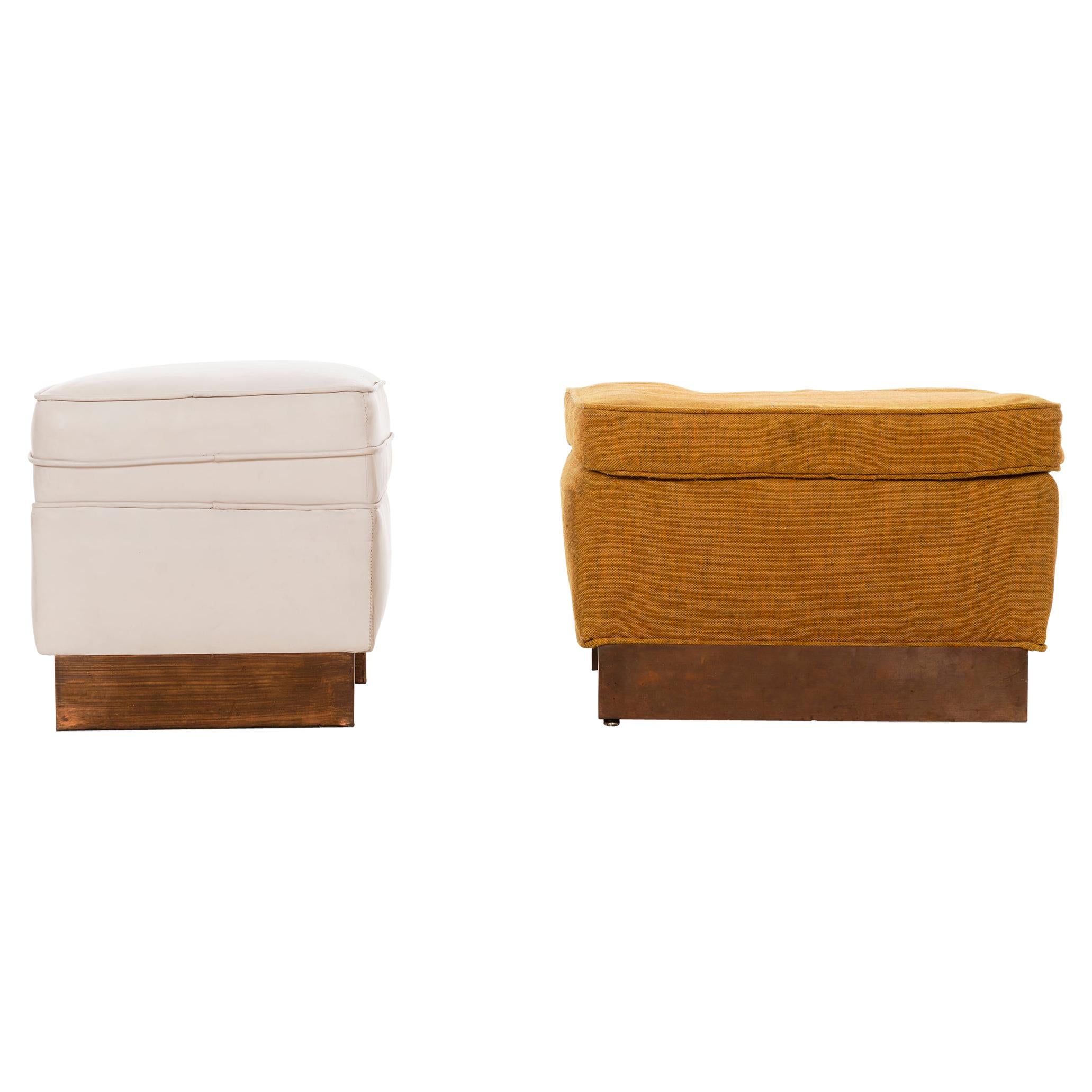 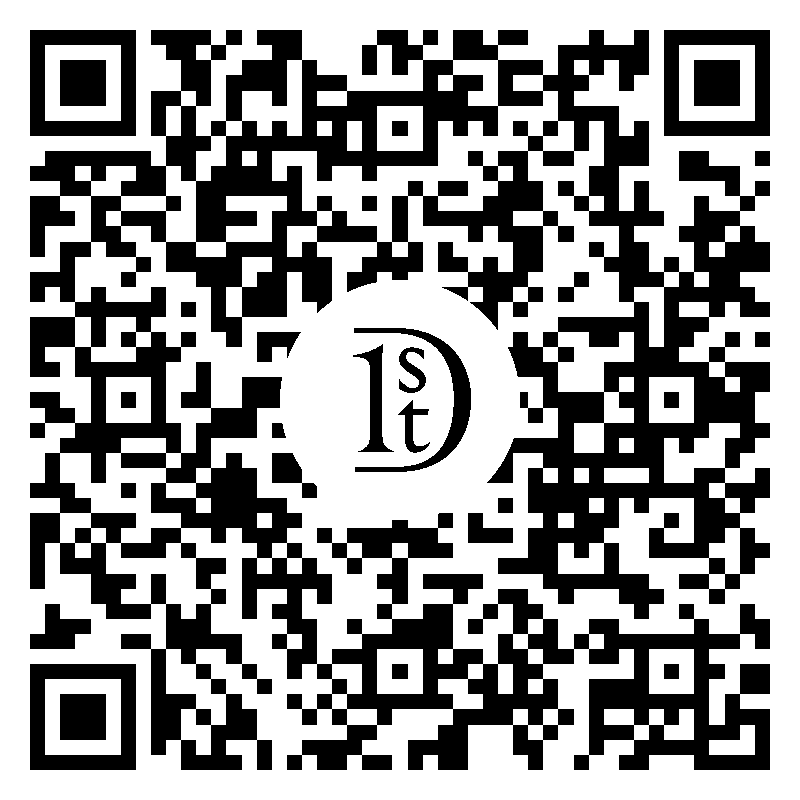 This extraordinary set is part of the Taliesin collection that Frank Lloyd Wright designed for Henredon in 1955. It comprises a mahogany coffee table whose hexagonal top sits on a tripod base and six triangular mahogany stools that slip underneath. The pieces are edged at the top with a Taliesin dentil design, and the designer's signature stamp is visible at the base of one leg of the table. The measurements below are for the table. The triangular stools are 21.75" W along each side x 19" D x 14.75" H and can be used as small side tables. 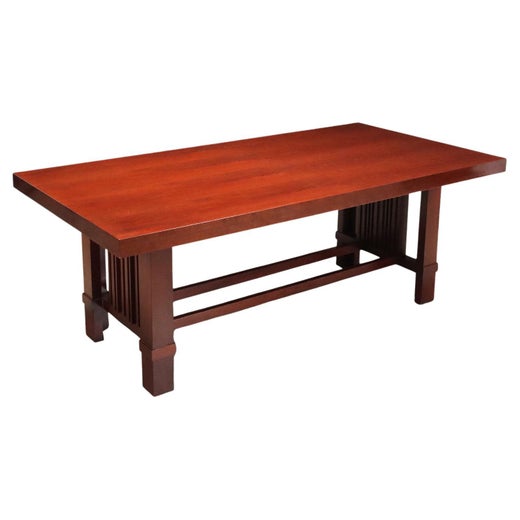 Without question the greatest architect the United States has ever produced, Frank Lloyd Wright and his philosophy of “organic architecture” — of buildings that exist in harmony with their natural surroundings — had a profound influence on the shape of modern life. Wright gave us some of the most elegant and iconic buildings in America: residences such as Fallingwater, in rural Pennsylvania, the Robie House in Chicago, and Taliesin, Wright’s own home; and masterful institutional structures that include the Unity Temple in Oak Park, Illinois, the Johnson Wax headquarters in Racine, Wisconsin, and the Guggenheim Museum in New York. Whenever possible, Wright designed the furniture for his projects, to ensure an affinity between a building’s exterior and interior.

Wright’s wooden chairs and tables for his “Prairie Houses” of the early 1900s have sleek, attenuated forms, influenced by both the simplicity of traditional Japanese design and the work of Gustav Stickley and other designers of the Arts and Crafts movement. For Taliesin and several residential projects, Wright designed severely geometric chairs that are marvels of reductivist design. He revisited many of these forms in the 1950s in furniture licensed to the firm Henredon, adding a decorative frieze-like element to the edges of tables and stools.

The works on 1stDibs also show how happily Wright embraced new forms and materials. His desks and chairs for Johnson Wax have a streamlined look and use tubular steel to the same effect as designer Warren McArthur, who collaborated with Wright in the interiors of the Arizona Biltmore Hotel. For the Price Tower (1956) in Oklahoma, Wright designed angular wooden desks as well as upholstered pedestal chairs made of chromed steel — audacious furniture for his tallest completed building project.

The beauty of Frank Lloyd Wright’s furniture designs is that while many of us wish we could live in one of his houses, his vintage sofas, storage cabinets and armchairs connect us directly to his architecture, and to the history he made.

Featured in The Americas

$33,000 Sale Price
21% Off
Mid-Century Modern "Cubo" Sofa by Brazilian Designer Jorge Zalszupin
By Jorge Zalszupin
Located in Clifton, NJ
This recently upholstered cubo (Cube) sofa was designed by Jorge Zalszupin (1922-2020) in the 1970s. The elegance, a feature of Zalszupin designs, on this piece does not come from ...
Category

$22,000
Masterpiece Coffee Table by Rude Osolnik
By Rude Osolnik
Located in South Charleston, WV
Previously the property of the Osolnik family. 41.5" diameter and 18" tall. An important artist, who seldom produced furniture. This example by Osolnik is representative of the fine...
Category

$16,500
Wharton Esherick Important Sofa
By Wharton Esherick
Located in Chicago, IL
Wharton Esherick important sofa for Lawrence and Alice Seiver. We are pleased the offer this exceptional item, the epitome of the American Craft Movement and the first of Eshericks ...
Category