Pretty, Playful and Perennially Popular: The Story of Chinoiserie 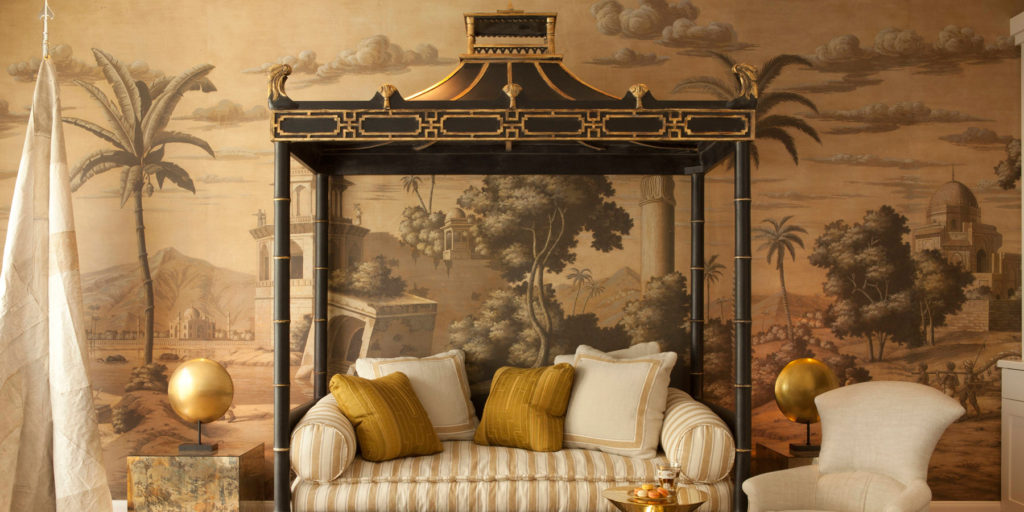 Europe’s obsession with the Far East led to a creative boom in the decorative arts, centuries of appropriation and, surprisingly, one of decor’s most enduringly chic styles. 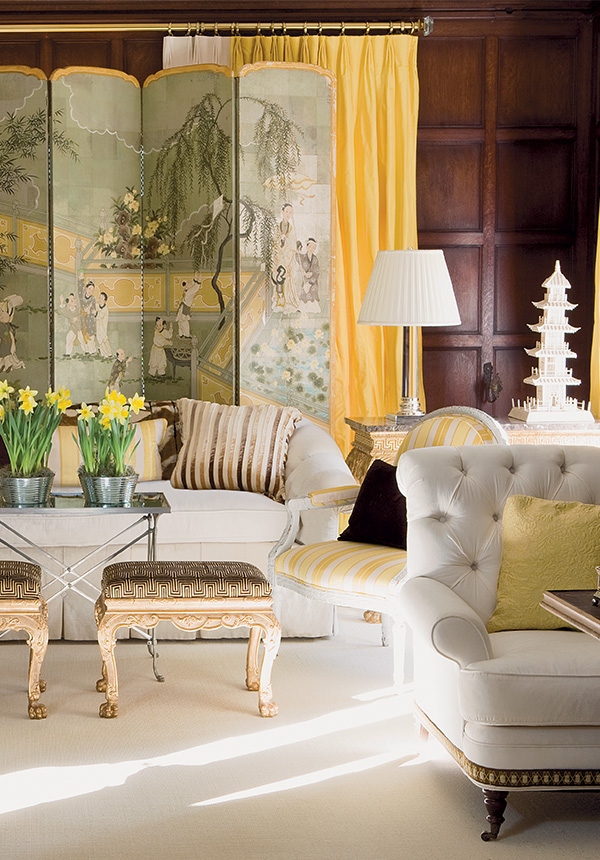 June 20, 2016Born out of the West’s fascination with Asia and popular from the 17th century through today, chinoiserie has unquestionable staying power. Here, at a Beverly Hills estate, Mary McDonald bridged periods and styles with a vintage bone pagoda and hand-painted screen (photo by Melanie Acevedo). Top: At the Corin Frost House, in San Francisco, interior designer Benjamin Dhong deployed de Gourney’s Early Views of India wallpaper and a daybed from Ceylon et Cie to create what he calls a “theatrical nod to the Raj” (photo by Lisa Romerein).

In the recent documentary film The First Monday in May, we see the intense preparations that went into the making of 2015’s blockbuster fashion show “China: Through the Looking Glass” — and the accompanying celebrity-studded gala — at the Costume Institute of the Metropolitan Museum of Art, in New York. That exhibition examined the image of China as it exists in the Western imagination through the lens of high fashion. To do so, it employed movie clips, evocative sound and lighting effects and dramatic tableaux juxtaposing the most captivating Western fashions with dazzling works of Chinese art, all of it in a spectacular staging conceived by Hong Kong–based film director Wong Kar Wai.

Conscious of how politically charged a subject “orientalism” has become, Andrew Bolton, the curator of the exhibition and the new head of the Costume Institute, took on the issue in his overview text. He acknowledged that it was now often perceived as portraying “subordinated otherness,” the term used by literary critic Edward Said in his culturally tectonic-plate-shifting 1978 treatise, Orientalism. What Said’s view did not take into account, Bolton argued, was the “infinite and unbridled creativity” that the West’s admiration for the East had unleashed.

And that’s certainly true of chinoiserie. New York–based antiquarian Carlton Hobbs attributes “the exceptional and enduring charm” of this style, which originated in the 17th century, to the endearing naïveté of the Europeans as they “strove to capture the essence of a culture so ancient and alien.”

That culture was not China per se but “Cathay,” the medieval name for the far away land that had piqued the imagination of Europeans ever since Marco Polo published an account of his travels there around 1300. His descriptions of the people and their dress, buildings, plants and animals seemed so immensely strange that his memoir came to be known as “the million lies.” Far from being deemed inferior, Cathay was admired as a civilization of extreme refinement and learning, as well as extravagant luxury. Everything about the Middle Kingdom became even more compelling after it shut itself off from the rest of the world in the 15th century. Which is why when it haltingly reengaged the West, aristocratic Europeans went mad for anything “oriental” — porcelain, lacquerware, silks, wall hangings and tea — but grew little wiser about the land, its people and its culture. 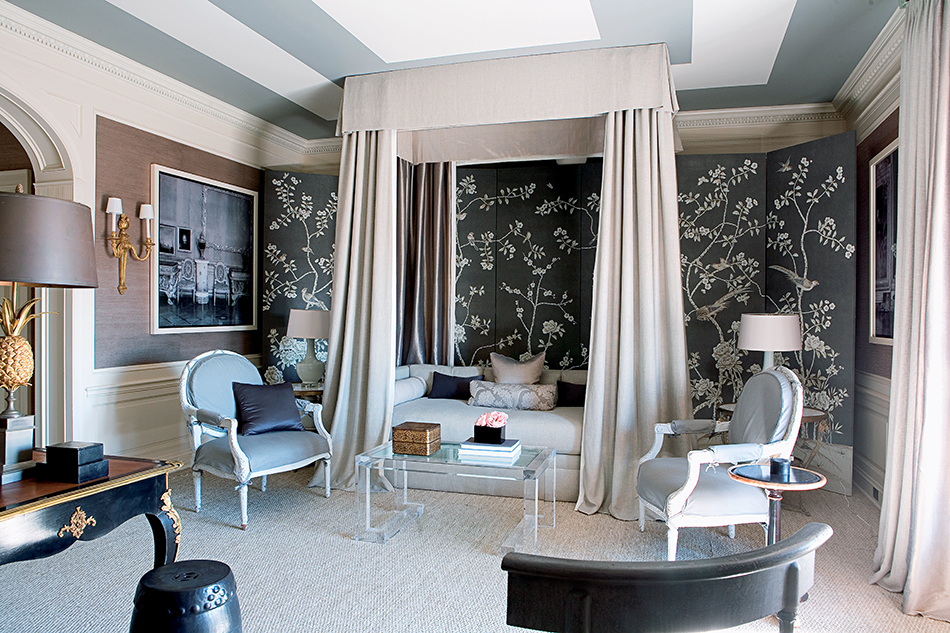 For another one of her interiors, McDonald commissioned Robert Crowder to create a custom chinoiserie screen. Photo by Miguel Flores-Vianna 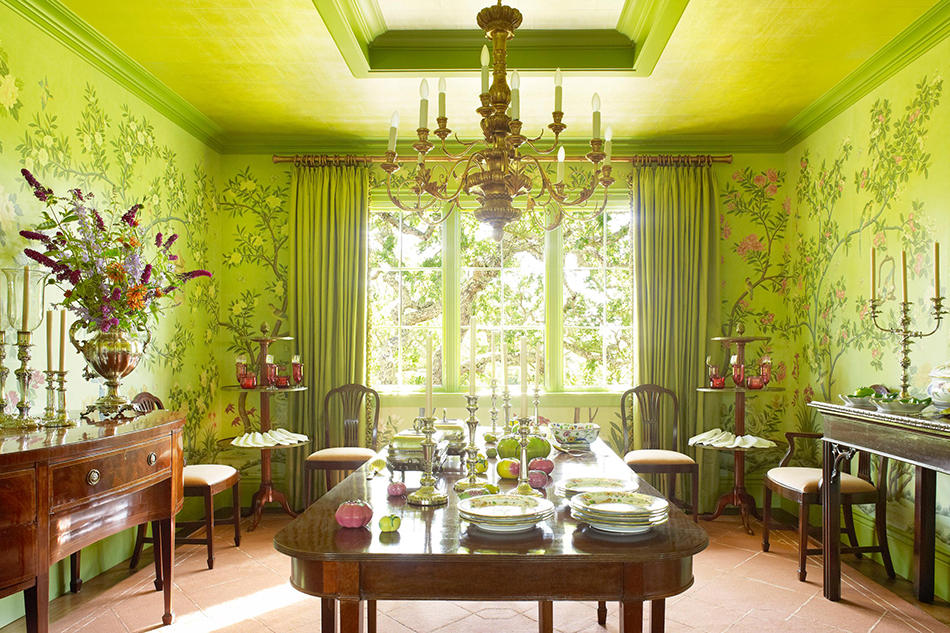 Los Angeles–based designer Suzanne Rheinstein enrobed the dining room of a traditionally decorated home in Northern California’s Marin County with an Asian-feeling wallpaper, lacquering the ceiling in a coordinating color. “I chose a verdant ground color for the hand-painted Gracie wallpaper, as my clients have a fine collection of flowered porcelain,” Rheinstein says. “Dining in here is like being in a beautiful fantasy garden.” Photo by Pieter Estersohn 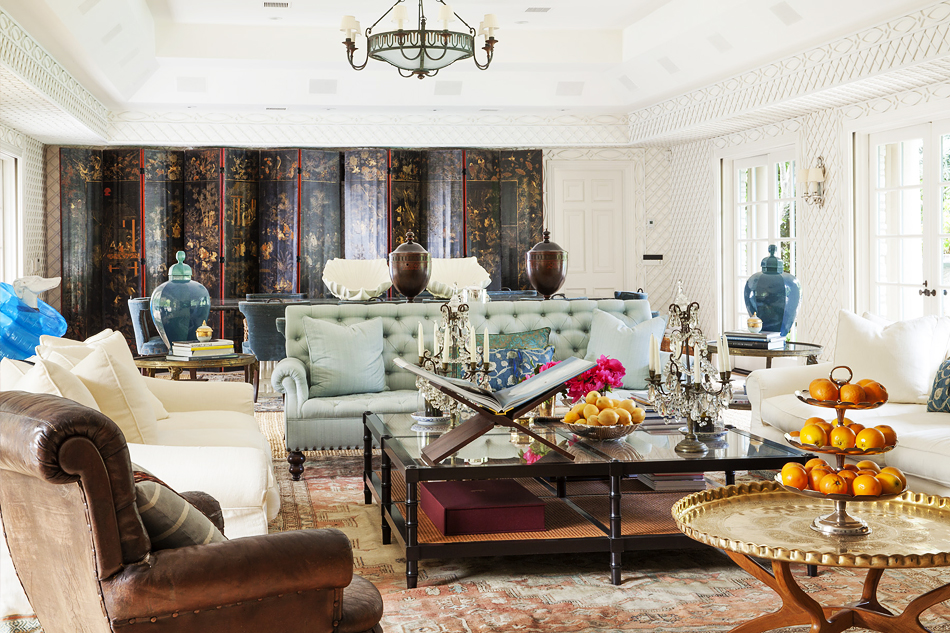 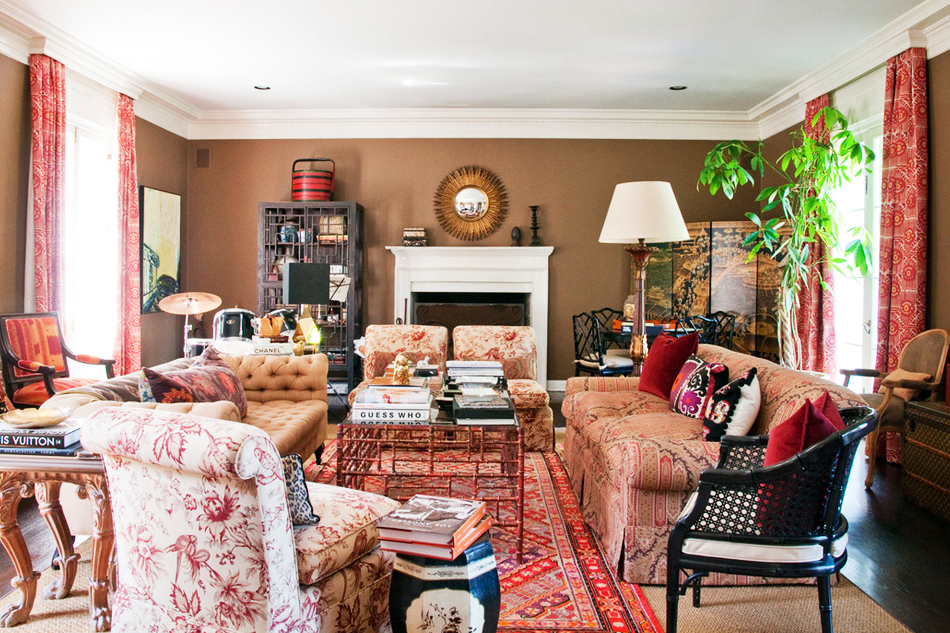 A certain Asian inflection — a Chinese-style cabinet here, a rattan barrel-backed chair there — accents the L.A. living room of designer Betsy Burnham. “I love chinoiserie,” say Burnham. “It’s vintage-y, it’s rich, and it’s about as over-the-top decorative as it gets. I think it can work in a wide range of projects. It definitely fits right into my living room, with a deep color palette, tons of layers and a crazy mix of styles.” Photo courtesy Burnham Design 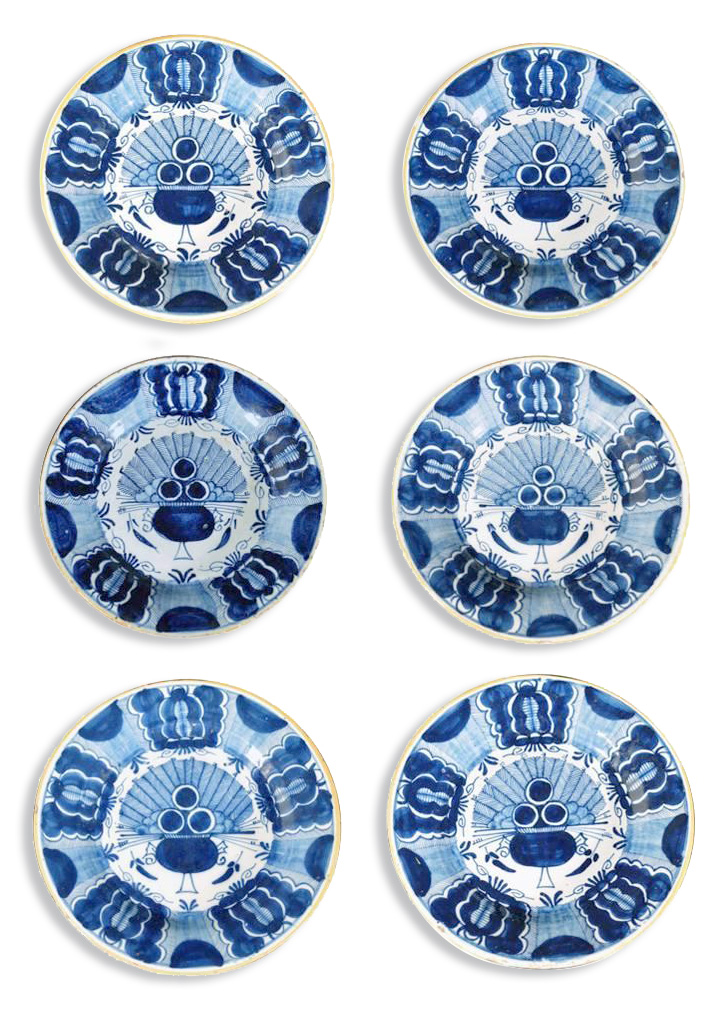 To feed this frenzy for Chinese goods, European craftsmen quickly attempted to approximate porcelain and lacquerware at home, and trading companies soon set up factories in Asia to produce items expressly made for the European market, resulting in brilliantly colored hand-painted wallpapers. Artisans in Europe and Asia adorned the various pieces with reveries of ponytailed peasants, mandarins, pagodas, dragons and other exotic fauna and flora, along with Mughal palaces, men in Ottoman dress, geishas and costumed monkeys, since for them, all the East was Cathay, a land of magic and mystery. These whimsical pastiches were in keeping with the exaggerated whimsy of the rococo, which had become the prevalent decorative style by the middle of the 18th century.

If you’re unfamiliar with chinoiserie’s origins, however, and you’re Chinese, this hallucinatory imagery can be devoid of charm. New York interior designer Brian J. McCarthy, a tremendous aficionado of the style, recalls recently being at Ateliers Brugier — the fabled Parisian lacquer workshop that deals in antique pieces, especially Coromandel screens — when Chinese visitors became indignant over some fantastical depiction, which they took to be demeaning. Their sensitivity is understandable. Many have not forgotten how the admiring posture of the West turned rapacious and colonizing when, in the 19th century, its unquenchable appetite for Asian luxuries resulted in massive trade imbalances. This, in turn, led to years of conflict, culminating in the Opium War, which left China depleted, defeated and indebted to the West. Happily, at Brugier, the proprietor was able to ease tensions with earnest explanations that the imagery was meant to be fanciful, not degrading. 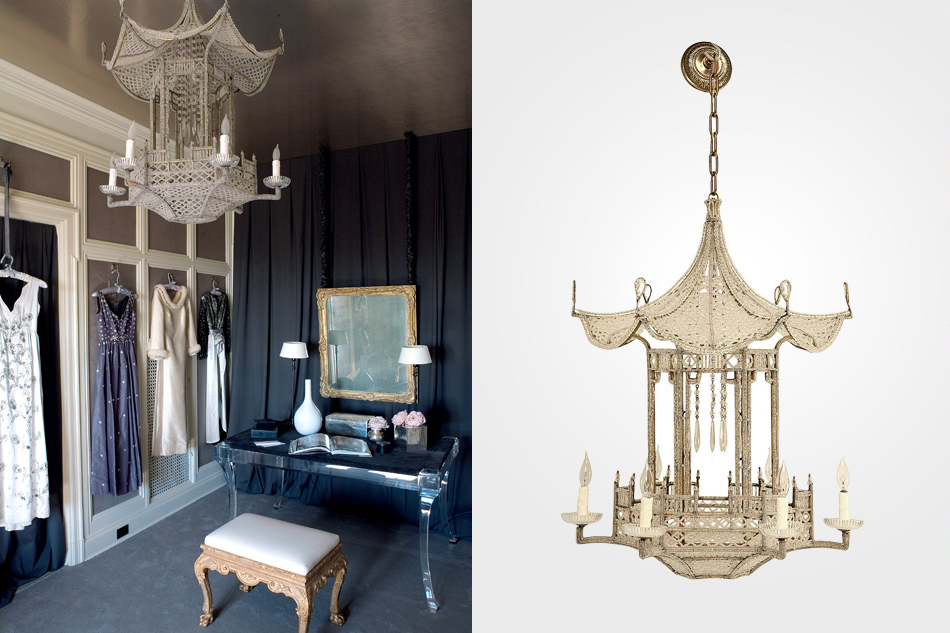 Chicago’s Antiques on Old Plank Road has for sale a six-light Maison Baguès–style pagoda chandelier, ca. 1940, like the custom one McDonald had made for the Beverly Hills estate. (Dorothy Draper also favored such lanterns, hanging them as part of her post–World War Two redecoration of West Virginia’s Greenbriar resort.) Photo by Miguel Flores-Vianna 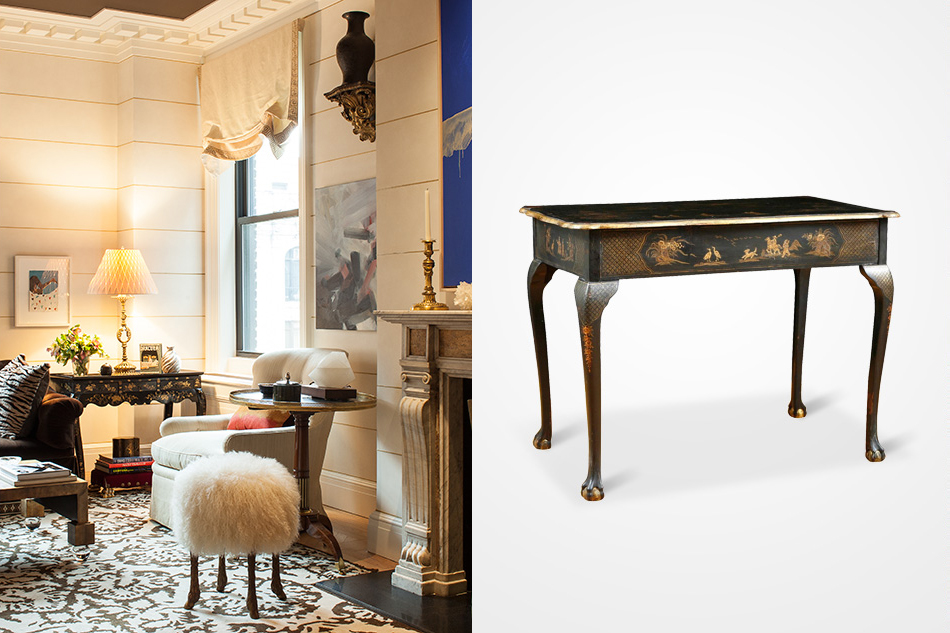 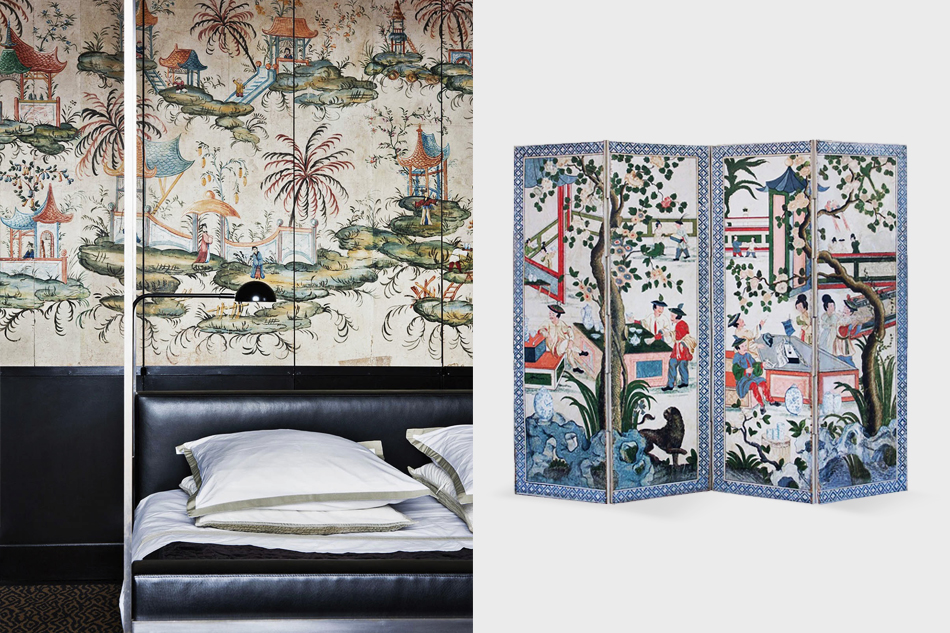 Left: Architects Thierry Mérillou and Daniel Suduca found this 18th-century chinoiserie wallpaper already in place in a historic hôtel particulier they refurbished in their hometown of Toulouse, France. They combined it with an ultra-contemporary black-leather and stainless-steel canopy bed of their own design (photo by Manolo Yllera). You can create a similar look, even without the extant wallpaper, using this painted Louix XV French screen, made in the mid-1700s and now on offer from Newel. Photo by Manolo Yllera 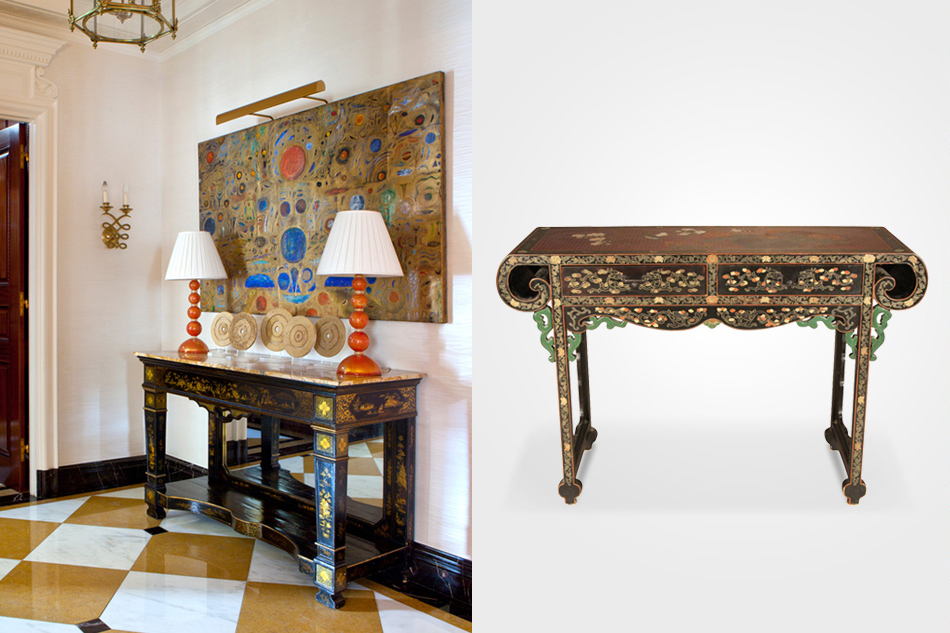 Left: In an example of what the New York–based firm’s describes as its “new traditional” approach to decorating, Cullman & Kravis placed a 19th-century Eastern-accented English console table, purchased from Florian Papp, within a vignette of contemporary Murano table lamps and art, as well as a Louis XVI lantern. Right: This late-19th-century Chinese lacquer altar table, offered by Norwalk, Connecticut’s Fairfield County Antique and Design Center, would bring a similar look home. Photo by Nick Johnson 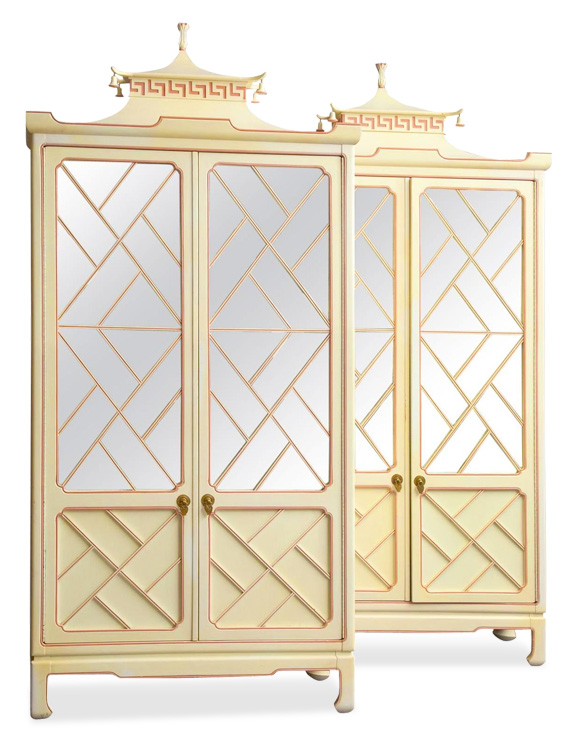 The antique-mirror doors of this pair of chinoiserie two-door cabinets, made around 1950 by Tomlinson Furniture and now on offer from New York’s Liz O’Brien, open to reveal mirrored interiors and shelving.

The entourage was there, in fact, because Chinese collectors are fast becoming interested in antique export lacquerware as well as all manner of chinoiserie. De Gournay, the maker of scenic wallpapers and fabrics hand-painted in China, has two showrooms in the country and is currently at work on designs for the residence of Fan Bingbing, the nation’s biggest movie star. Could there be a greater testimony to chinoiserie’s allure?

“Even at the height of modernism, the demand for chinoiserie never faded,” says Guy Regal, the executive managing director of New York’s Newel, an important purveyor of the antique work. “I don’t know a major decorator that I haven’t sold it to. It has never been out of fashion.”

The Manhattan dealer Liz O’Brien traces the early-modern passion for chinoiserie back to the opening, in 1924, of the Met Museum’s American Wing, which featured several 18th-century rooms with sumptuously hand-painted scenic wallpaper. “The opening caused a sensation, and chinoiserie was a big part of it,” she says. “Everyone was writing about it.” O’Brien is certain that the great tastemakers of the day — Syrie Maugham, Elsie de Wolfe and Francis Elkins —  saw or read about the rooms and began employing scenic wallpapers once more. By the 1930s, chinoiserie wallpapers and furnishings were everywhere. Coco Chanel collected folding Chinese screens and covered the walls of a room in her Paris apartment with Coromandel panels. Hand-painted chinoiserie papers adorned the walls of the Duke and Duchess of Windsor’s villa on Paris’s Bois du Boulogne, which was furnished with antique pieces in the Chinese taste as well as contemporary interpretations by Maison Jansen. Meanwhile, chinoiserie became a key component of the Hollywood Regency look.

During the postwar period, designers like James Mont, Tommi Parzinger and Samuel Marx reinterpreted the style in decor that was more sleek and spare. The Los Angeles designer William Haines even used it to great effect in distinctly modern interiors. 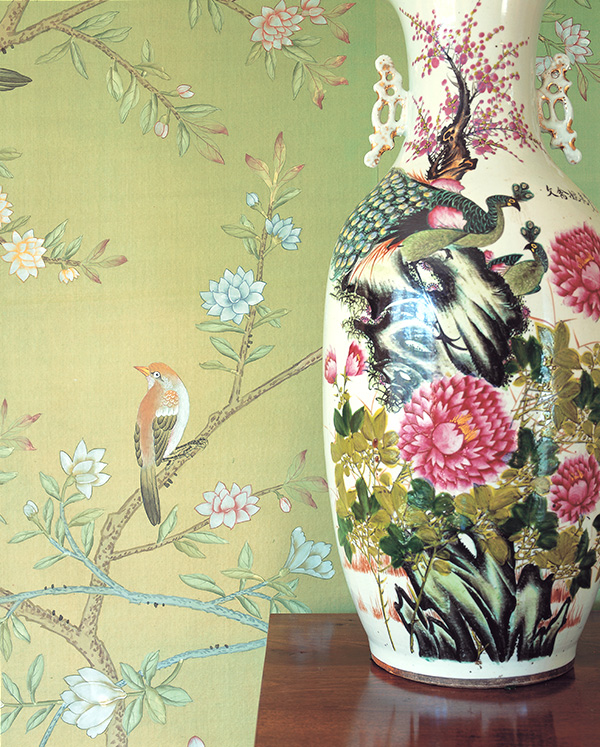 In the dining room of a Beverly Hills estate, McDonald paired custom hand-painted wallpaper by de Gournay with a porcelain vase from J.F. Chen. Photo by Melanie Acevedo

For McCarthy, the style’s fluidity — its ability to combine with diverse aesthetics — is crucial to its popularity. “Whether Swedish, German, French, Italian or British, everyone had his or her take on it,” he says. For example, Italian artisans had a bravura approach, while the French were more refined and the Brits, on the whole, more restrained, though sometimes also cheeky. “And each century brought a new vision into play, yet always one that offered a joyful atmosphere,” adds McCarthy.

That fluidity continues in the way chinoiserie is employed today. Michelle Nussbaumer, a Dallas designer and the proprietor of the shop Ceylon et Cie, says she loves to “mix it with contemporary and modern pieces,” noting that “chinoiserie lamps and brackets can go anywhere.” Los Angeles–based designer Suzanne Rheinstein takes a similar approach: “I like to use chinoiserie as an exclamation mark. To me, it looks more contemporary that way. I don’t do themed rooms.”

Rheinstein’s fellow Angeleno designer Mary McDonald adores such rooms, however. She once created a hot-pink chinoiserie tent room for a young girl, and her lacquered white and robin’s-egg blue office is a study in Chinese Chippendale. For her, the trick to making these spaces feel contemporary, not historical, is adjusting the colors and the scale of the designs. Thus her use of unexpected hues.

Chinoiserie endures, it seems, because it somehow keeps defying conventions. A decorative confection conceived for mass consumption, it has kept the design world intrigued — and inspired — for centuries.