Emerging in the 17th century, chinoiserie appropriated the aesthetics and imagery of popular East Asian design for European-made versions. Reflecting the exoticization of China, Japan and other countries in this era, the word directly translates from French to “Chinese-esque,” which reveals its shortcomings as a style of furniture and decor that often stereotypically and reductively mimics Asian culture rather than showcasing and paying tribute to its artistic traditions.

The enthusiastically decorative chinoiserie style was propelled by influential tastemakers including French King Louis XIV, whose Trianon de Porcelaine in 1670 was inspired by Chinese architecture. Expanded trade between the East and West led to a demand for porcelain, lacquer objects, silk and other goods, which further informed the fanciful furniture being crafted in Europe.

Artisans working in the chinoiserie style used materials and elements like pagoda shapes, bamboo, lacquer surfaces, bird and flower motifs and other interpretations of Asian design on pieces that were frequently set against vibrant wallcoverings. This whimsical approach yielded chinoiserie furniture that boasted dramatic flourishes drawing on the natural world and reflected the dominance of Rococo during the 18th century.

As chinoiserie was shaped by approximations of Asian design by European creators, it had regional variations, such as Chinese Chippendale in England where cabinets, chairs and tea tables had wooden fretwork designs and “japanned” surfaces intended to resemble lacquer work that was created in East Asia. In North America, furniture makers in Boston and New York integrated chinoiserie-painted scenes into Queen Anne furniture.

Antique chinoiserie furniture has continued to be fashionable, from its popularity with decorators of the Hollywood Regency era to contemporary interior designers, although it brings with it a complex history.

Large Framed Antique Chinese Embroidery Skirt Textile
Located in Atlanta, GA
On offer is an attractive piece of textile of Chinese origin beautifully framed in a gilt and UV glass shadow box. Artistically displayed, the piece is the large apron portion of a t...
Category

Italian Chinoiserie Wallpaper
By Larghevedute
Located in Milan, IT
This superb wallpaper was painted by hand on natural cotton canvas and is a one-of-a-kind. The leaves are painted freehand, while the rest of the painting, with its delicate and slen...
Category

Antique Chinese Hand Painted Fan with Calligraphy, c. 1900
By Asian Style
Located in Jimbaran, Bali
A Chinese hand-painted fan with hand-painted calligraphy (with two different drawing on either side). The fan's frame is crafted from bamboo and also includes wood engravings. The ca...
Category

Set of Twelve Chinese Watercolors on Pith Paper of Insects

Pair of Chinese Panels Painted on Paper Second Part, 19th Century
Located in Miami, FL
Animated scenes painted on paper. The paper is stretched over a wooden frame , A fabric is stretch over the back of the painting on he wood frame. Second part of 19th century. V...
Category

Set of Three French Chinoiserie Framed Canvas Paintings
Located in Rio Vista, CA
Magnificent set of three French oil on canvas paintings made in the chinoiserie revival period of 19th century, Europe. The center painting features a large peacock in a tree above a...
Category

Schumacher by Mary McDonald Chinois Palais Wallpaper Mural in Aquamarine
By Mary McDonald, Schumacher
Located in New York, NY
Inspired by an antique Chinese silk panel, this design features exotic birds and cherry blossoms and is true to the original scale. Available as a printed linen and a wallcovering. ...
Category

Schumacher by Miles Redd Brighton Pavilion Wallpaper Mural in Multi
By Schumacher, Miles Redd
Located in New York, NY
Based on a rare 18th-century document and created by one of Europe's premier engravers, this design comes in coordinating panels of fabric and wallpaper with a 12-foot repeat. Pane...
Category

Verdure Hand Painted Wall Paper Set
By Paul Montgomery
Located in Staunton, VA
Verdure is a mural created for Michelle Nussbaumer's Wanderlust Collection by Paul Montgomery. This "Garden of Eden" incorporates motifs from her collection into a beautiful, perfect...
Category

Schumacher by Miles Redd Brighton Pavilion Wallpaper Mural in Blue
By Miles Redd, Schumacher
Located in New York, NY
Based on a rare 18th-century document and created by one of Europe's premier engravers, this design comes in coordinating panels of fabric and wallpaper with a 12-foot repeat. Panel...
Category

Pair of English 1790s George III Gold and Black Chinoiserie Corner Cabinets
Located in Atlanta, GA
A pair of English corner cabinets from the late 18th century, with chinoiserie motifs. Born in England during the reign of King George III, each of this exquisite pair of corner cabi...
Category

Schumacher by Miles Redd Brighton Pavilion Wallpaper Mural in Peacock
By Miles Redd, Schumacher
Located in New York, NY
Based on a rare 18th-century document and created by one of Europe's premier engravers, this design comes in coordinating panels of fabric and wallpaper with a 12-foot repeat. Pane...
Category

Brussels Tapestry Wallpaper Mural
By Paul Montgomery
Located in Staunton, VA
Brussels Tapestry is a mural of three separate panels hand painted on a silk blue background. Each panel consists of a collage of vignettes with figures, animals, boats, and towers....
Category

Four Large-Scale Decorative Chinoiserie Oil on Canvas Panels
Located in London, by appointment only
A magnificent and rare set of four large-scale chinoiserie painted panels, each painted with birds among landscape scenes and ornamental decorations. Each panel Measures: Height ...
Category 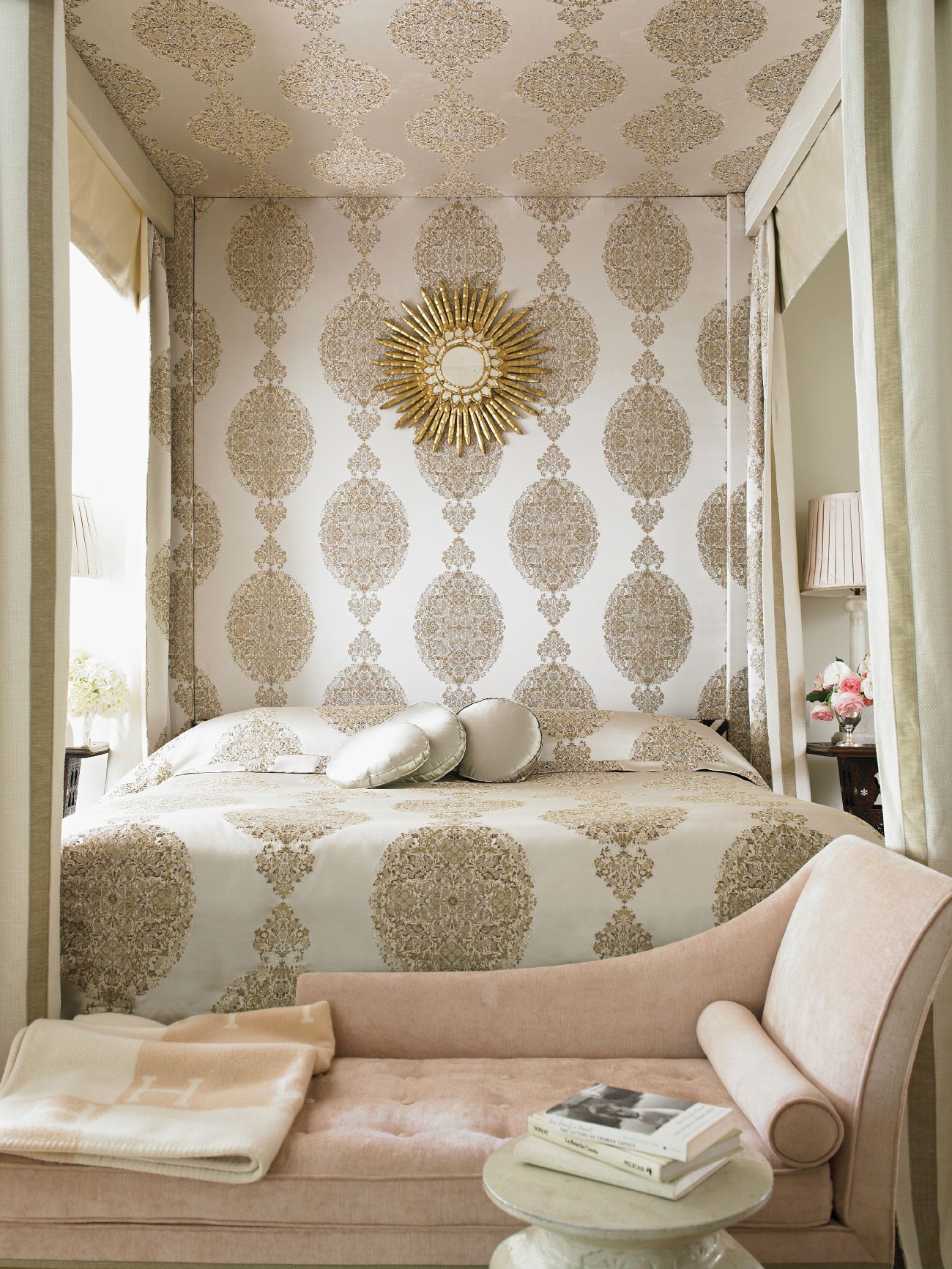