Quite understandably, taking work home from the office is not filled with positive associations. There is, however, one upside to being around-the-clock beholden to one’s email inbox: it justifies investing in a swish, uniquely personal home office. And while we’re advocates for a healthy work-life balance, we are above all design obsessives. To that end, feast your eyes on 18 home offices that are so beautiful, that not only will you enjoy taking work home with you, you’ll probably actually look forward to it. 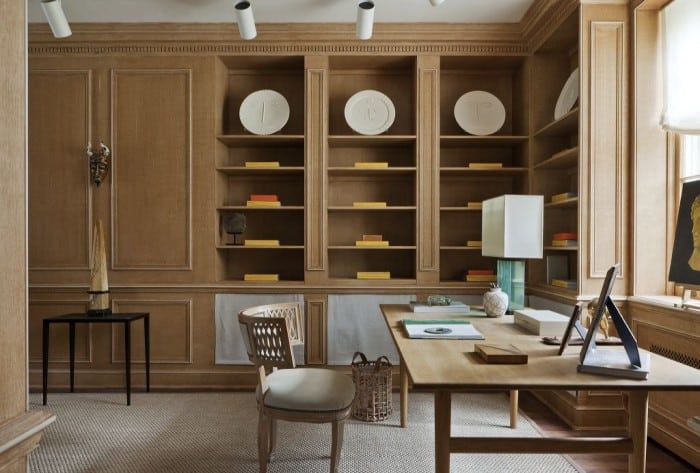 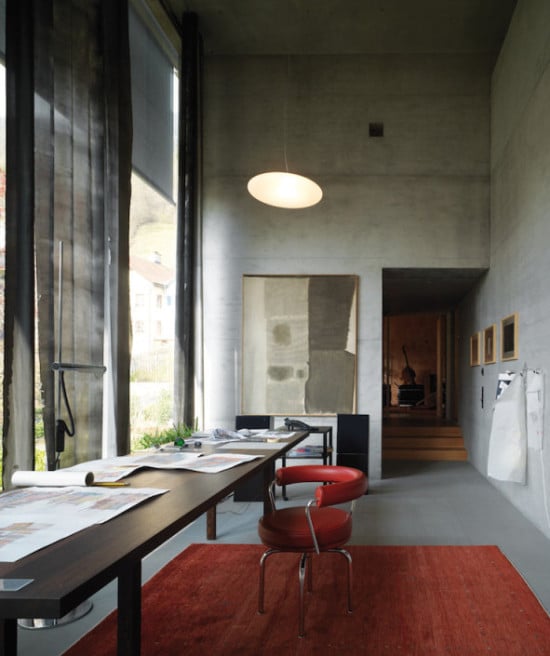 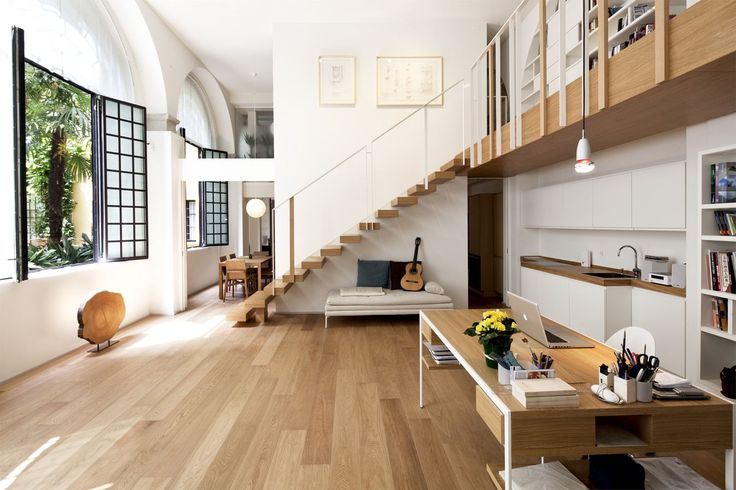 This Milan loft — an 18th-century stable renovated by Modourbano in collaboration with artist Takane Ezoe — presents a sophisticated combination of Italian elegance and Japanese minimalism. The living areas are indistinct and the kitchen blends into the office smoothly and unobtrusively. 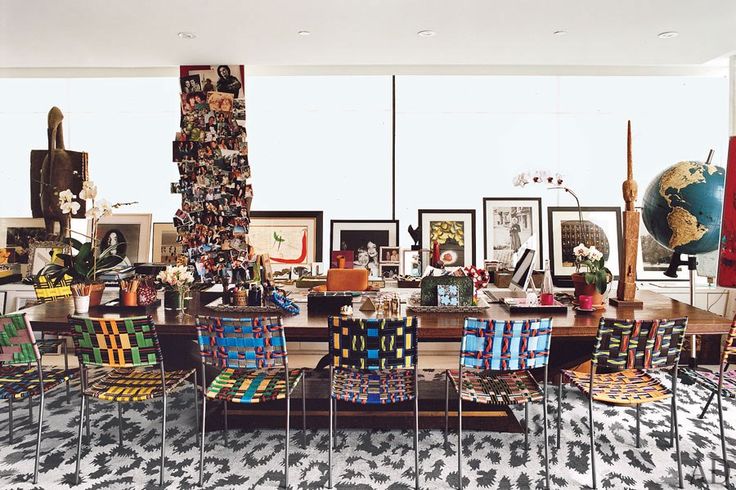 At her live-work penthouse in Manhattan, designer Diane Von Furstenberg sits at a Ruhlmann desk encircled with Franz West chairs. The bold leopard print rug, however, is Von Furstenberg’s own design. 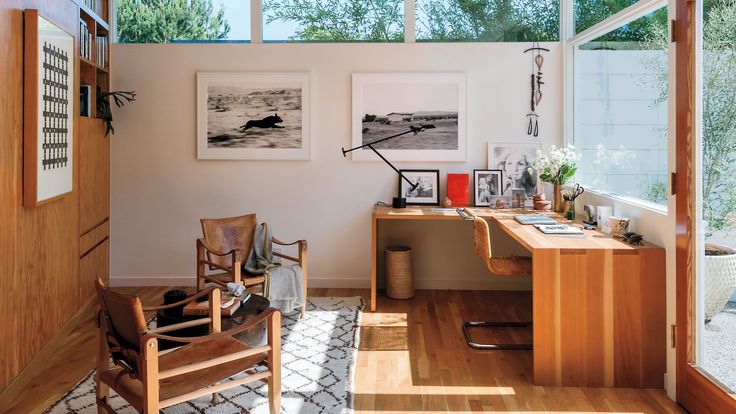 A white wall subtly yet strategically offsets the wood panelling, desk and beautiful Kaare Klint safari chairs inside the office of this midcentury modern house in Los Angeles, California. 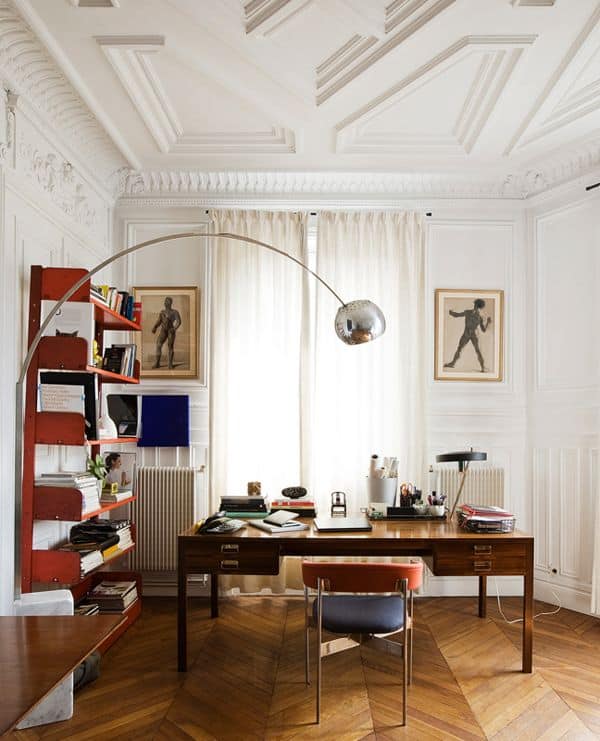 The home office of design duo Cristophe Comoy and Luis Laplace is an exercise in symmetry and color coordination. An Achille Castiglioni Arco Lamp beautifully punctuates the space. 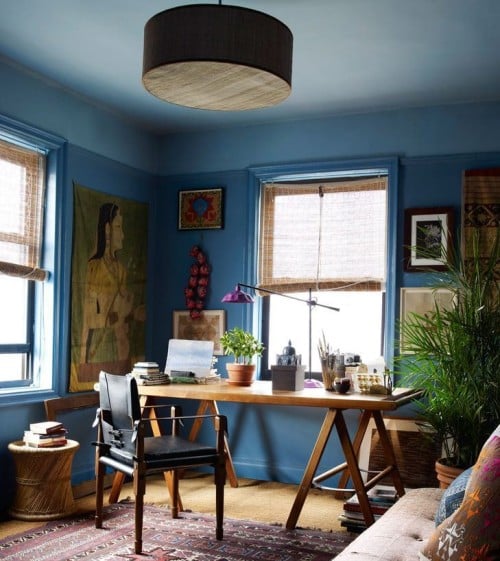 Textile designer John Robshaw cites a love of India as a key point of inspiration for the decor of his New York home — a vintage rug and portrait from the country may be found in his office. 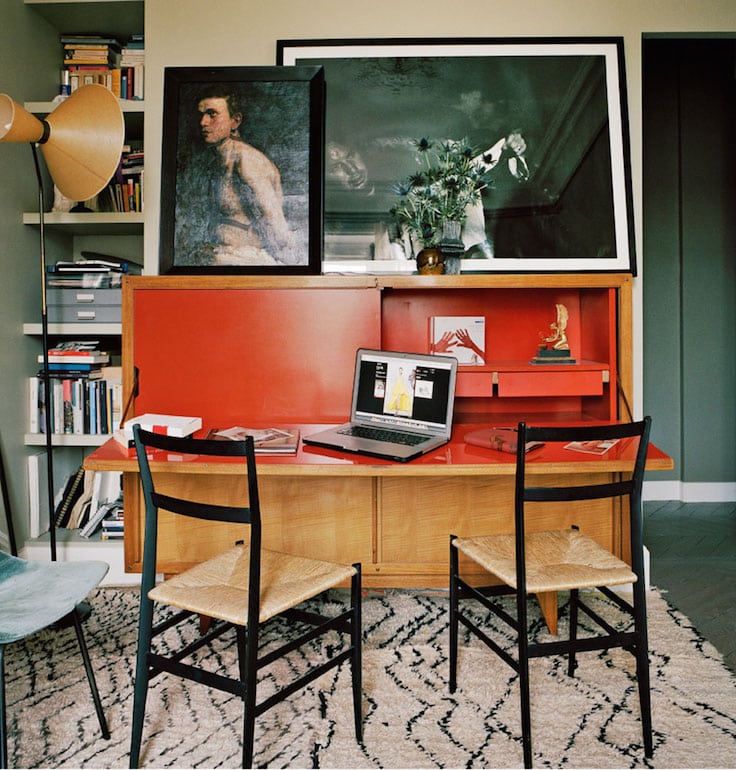 In Paris, fashion designer Giambattista Valli sketches at a lipstick-red secrétaire, alongside midcentury lighting and a vintage Moroccan rug.

Photo by François Halard via Vogue. 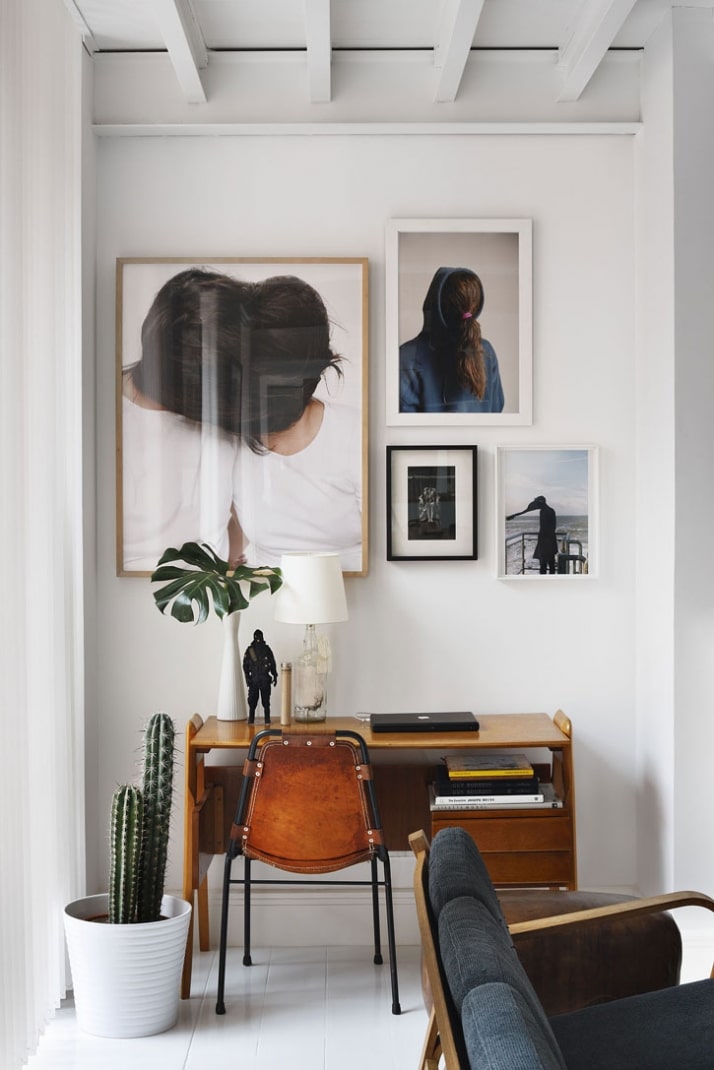 A 1950s Les Arc chair by Charlotte Perriand sits at a sleek work station in the Madrid residence of designer David Delfin and photographer Gorka Postigo.

Photo by Manolo Yllera via Yatzer 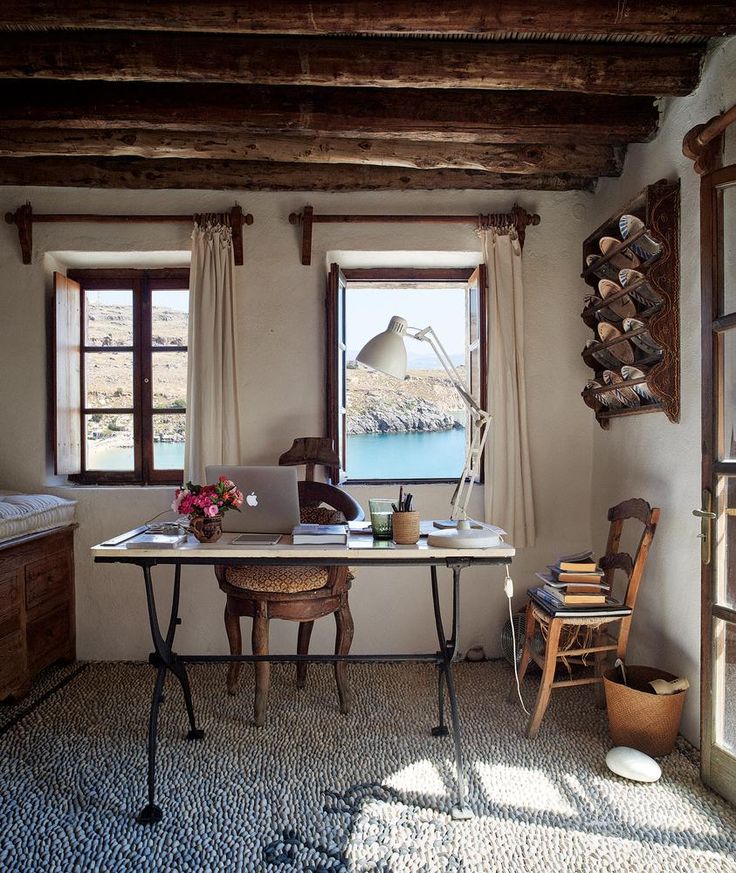 For a 16th-century home on the Greek island of Rhodes, British fashion mogul Jasper Conran utilizes an antique barber’s chair for desk seating. 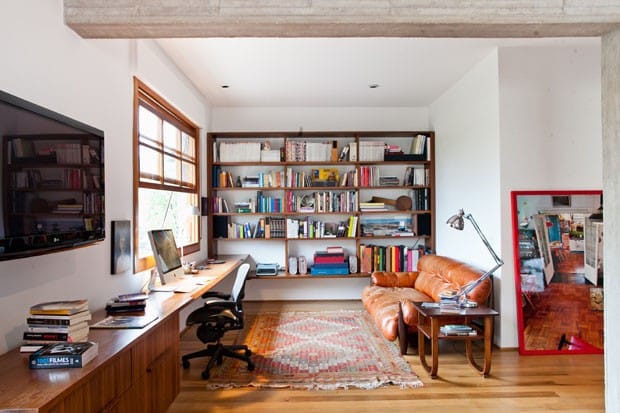 Inside the eclectic São Paulo home of Brazilian musician Nando Reis, a bright office doubles as both a work and recreation space. 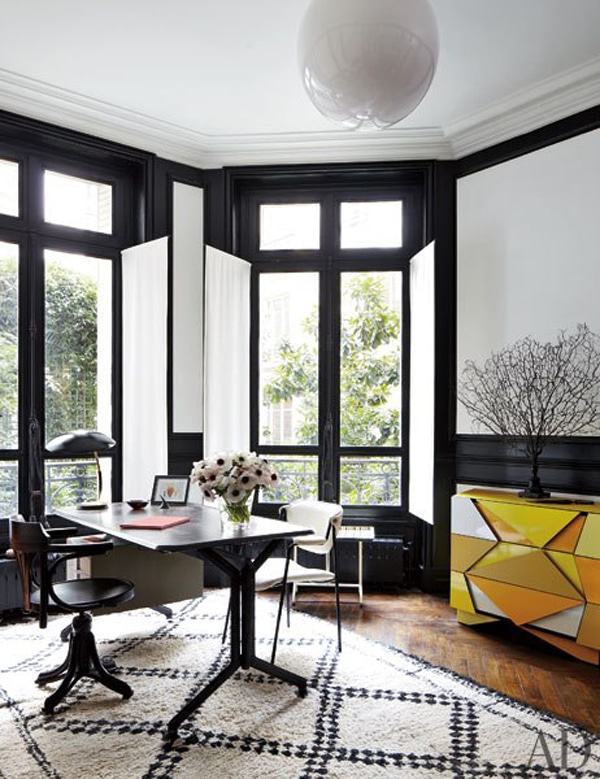 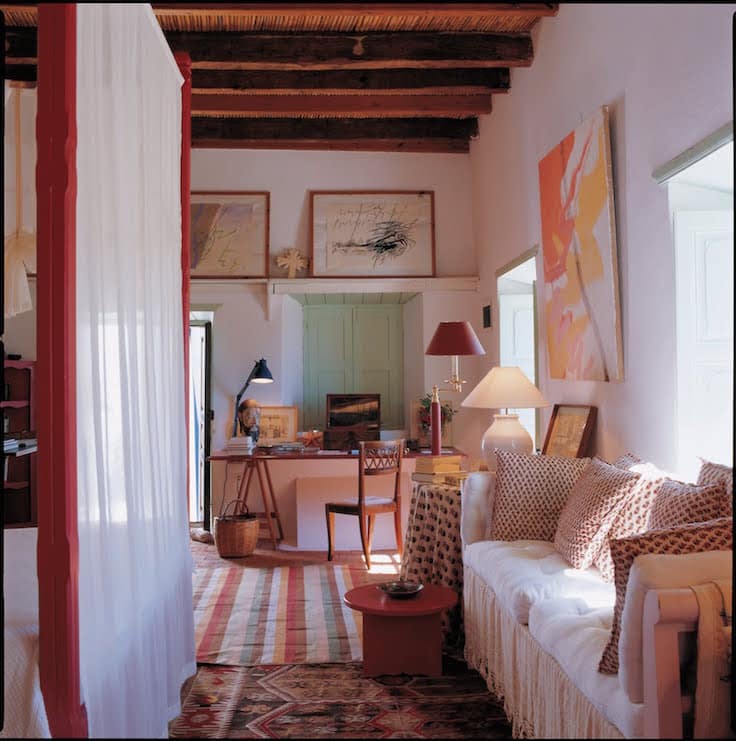 In this Greek island home,  an office area is intimately nestled in a corner of the bedroom amid a collection of abstract paintings. 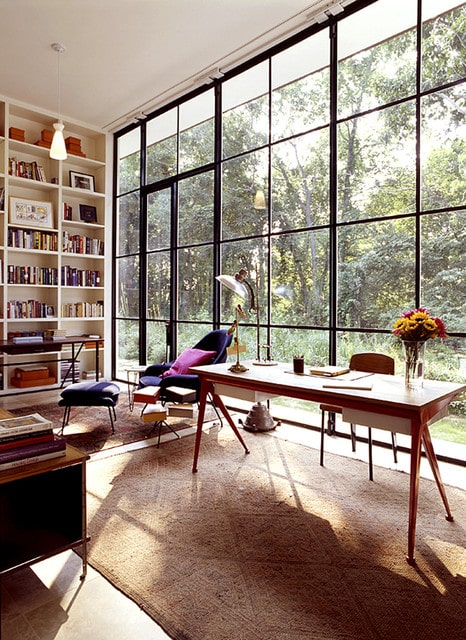 Modeled after steel factory panels, the floor-to-ceiling windows in this Hamptons house lend a note of industrialism which is carefully balanced by an extraordinary mix of midcentury furniture pieces by Eero Saarinen and Jean Prouvé. 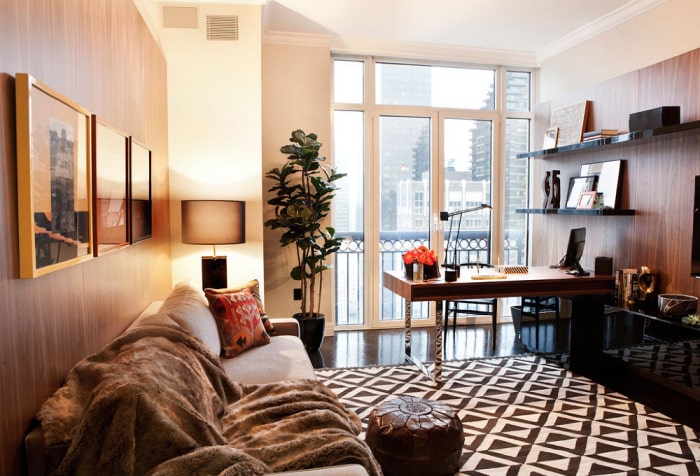 A midtown Manhattan pied-à-terre designed by designer Kelly Behun boasts the perfect balance of work space and comfort — a plush sofa is a strategic reminder to take a few breaks. 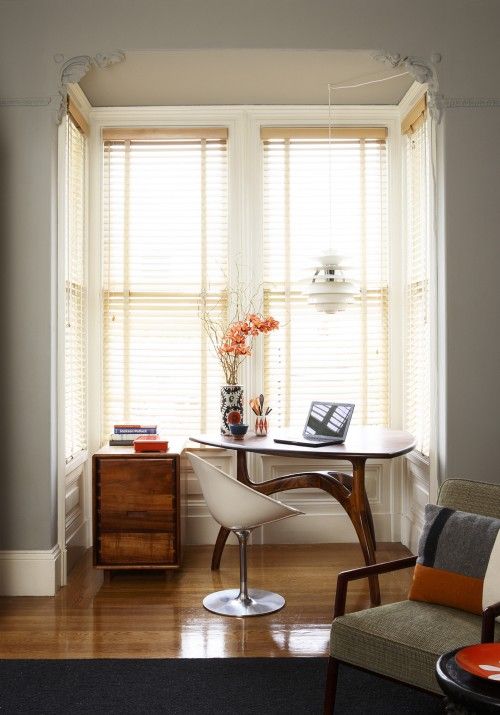 A late-19th-century Edwardian building — renovated by John Lum Architecture — provides an excellent backdrop for a collection of mid-century Scandinavian furniture, including a pendant light by Poul Henningsen. 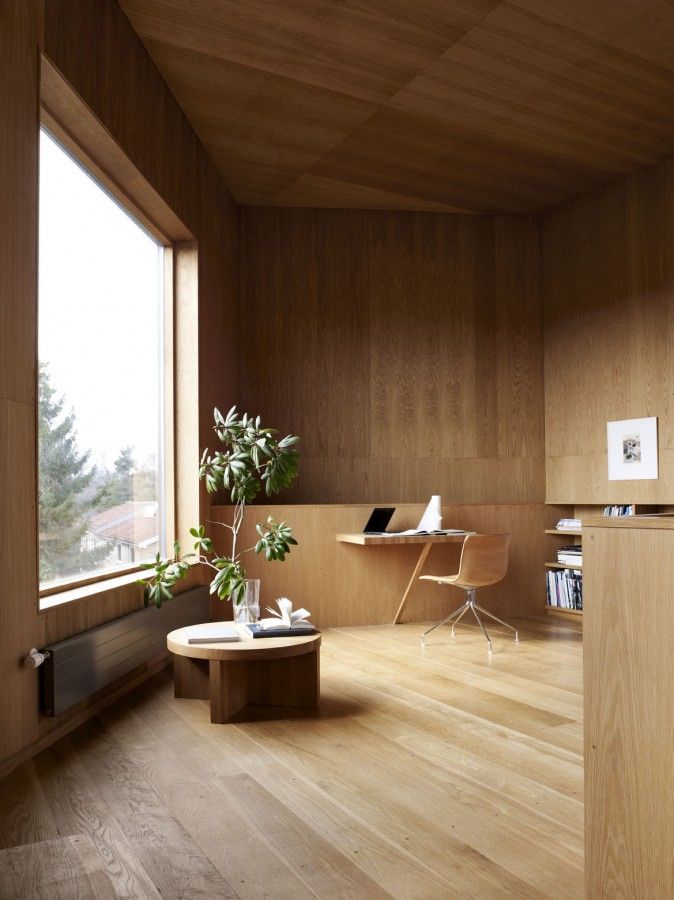 Photo by Mikkel Mortensen via Dezeen. 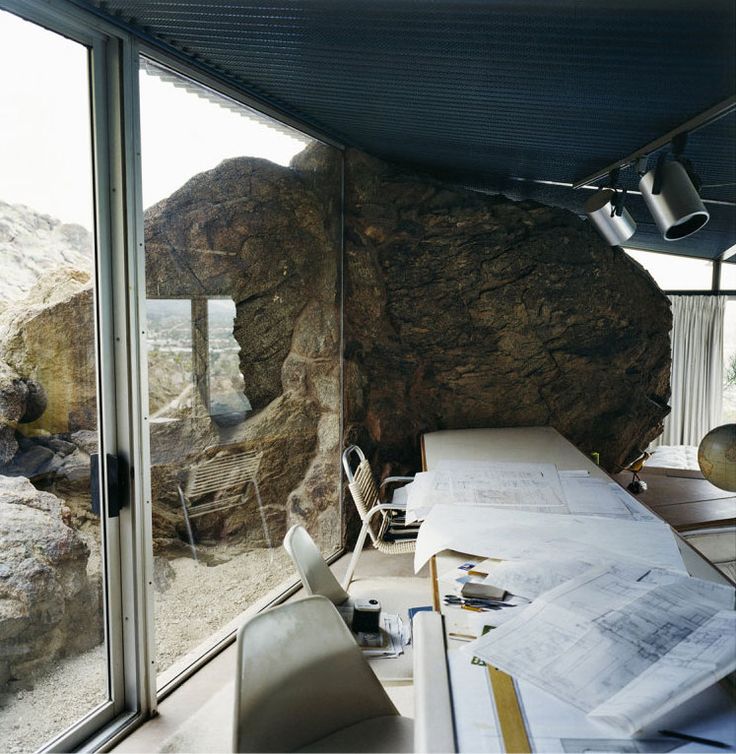 The most unique home office? For his Palm Springs home, architect Alfred Frey (known as the grandfather of Desert Modernism) incorporated a large boulder into the houses’s blueprints after zoning laws barred him from completing any on-site excavations.