Peek inside the streamlined 1930s house that was way ahead of its time.
by Joann Plockova
Pin
Share
Tweet
Email 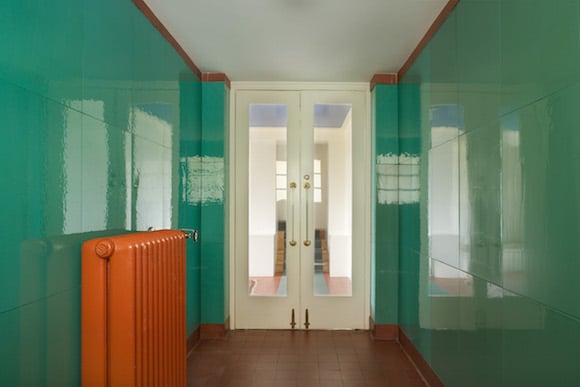 All photos by Martin Polak, courtesy of the City of Prague Museum

Not far from Prague Castle, in a quiet, upscale residential area, sits a striking white home with yellow-framed windows offering sweeping views of Prague’s Vltava valley. Built between 1928 and 1930, Villa Müller — today a museum open to the public — was designed by the now-iconic modernist architect Adolf Loos. 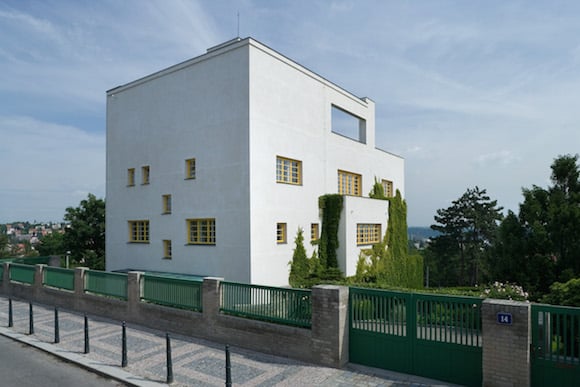 Loos, who was born in 1870 in Brno (then part of the Austro-Hungarian Empire and today the Czech Republic’s second largest city), thought that decorative detailing was offensive, as he outlined in his famous treatise Ornament and Crime. He was commissioned to design the Prague home by Frantisek Müller, an important building entrepreneur; his wife, Milada; and their daughter, Eva.

However, the family’s time there was short lived. In 1948, the communist government confiscated the house, which was soon nationalized and used for a variety of purposes, including the Marxist-Leninist Institute in the 1970s. Following the fall of communism, in 1989, the home was returned to Eva Müller, who sold it to the city of Prague. Earning status as a national heritage site in 1995, Villa Müller underwent a meticulous restoration in the late 1990s, when it was returned to its 1930s glory and then opened to the public in 2000. Here, we take a tour of Villa Müller’s most important rooms. 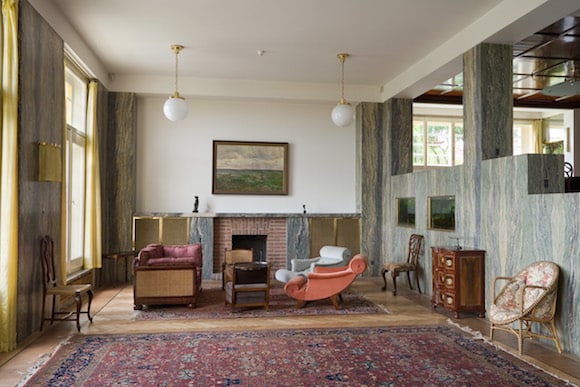 The living room is the heart of Villa Müller. Also called the residential hall, the expansive space is reached via a short staircase from the foyer, followed by a low recess opening that Loos designed to create an element of surprise when moving from the narrow hallway to the large, open living room.

It is here where Loos’s Raumplan design is fully visible. “The living room is connected to the dining room, which is situated on a mezzanine, and the boudoir, reached by a spiral staircase, ” Szadkowska explains. The room’s green and gray Cipollino marble–clad walls sets the tone and also exemplifies Loos’s emphasis on fine materials over ornamentation. To emphasize the wall’s importance, Loos set two aquariums within in it.

The furniture (much of it original) is set in groups on the two shorter walls, but in general each piece stands alone. “The heterogeneity of the seating arrangements in his interiors was explained by Loos as an attempt to make it possible for everyone to find comfortable seating according to their individual needs.” Pictured are velvet his and her Loos lounge chairs, produced by Viennese company F.O. Schmidt. Prague-based firm Emil Gerstel produced all of the other furnishings, including the oval rattan chair, the baroque chairs by the window and the three-drawer commode. Above the brick fireplace is South Bohemian Landscape 1 by Otakar Lebeda. This is one of five paintings in the living room from the Müllers’ extensive art collection. 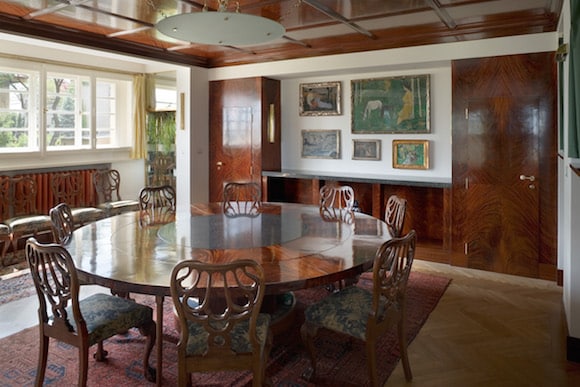 Clad in dark mahogany, the dining room’s ceiling can be seen through the living room. Hanging from it is a Loos-designed lighting fixture that conceals four bulbs behind its round pane of matte glass. The room’s centerpiece is the round dining table. Supported by a thick octagonal base, the expandable table, also designed by Loos, features a syenite tabletop in the center, which could accommodate the family when dining alone.

However, with the addition of one or two mahogany rings, the table can be expanded to seat 12 or 18 diners, respectively. Only 14 of the original 18 English Chippendale chairs survive today. Displaying five paintings by Jan Preisler, the back wall is bordered by two mahogany cupboards. The brass handles of their doors feature ivory grips. The door on the right opens to a cabinet displaying glassware designed by Loos and produced by J. & L. Lobmeyr, and the door on the left leads to the pantry and kitchen. 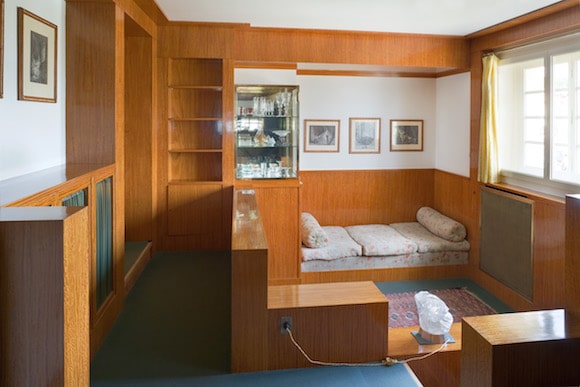 “The boudoir is the most articulated room in the house,” Szadkowska says. “Here, Loos joked by composing a relatively small space according to the principles of Raumplan, and divided it into two horizontal levels.” The upper level (not pictured) includes a built-in sofa, which was where Milada chatted with friends over coffee. A small window offering a view into the living room could be opened by sliding the window into the wall, like on a train, and it had a privacy curtain. On the lower level, intended as a place to rest, the settee is upholstered in the original floral-patterned French Cretonne, which matches the sofa. The honey-colored walls and furniture are made from rare lemonwood. 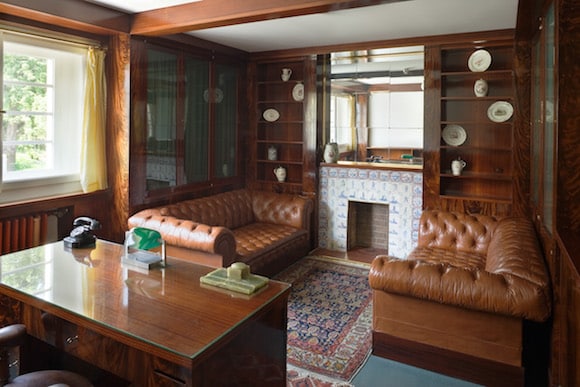 Also called the gentleman’s study, this was Frantisek’s office and private study. Clad in a dark mahogany, the room’s most interesting feature is the desk designed by Loos. On the left side, there is narrow slot where Frantisek could deposit his correspondence, which would then be picked up by his servants on the other side where there is a small door. The room’s fireplace is clad in Dutch tiles and sits in between two leather sofas — replicas of the originals produced according to historic photos. Oriental carpets, featured throughout the house, were part of the family’s collection. 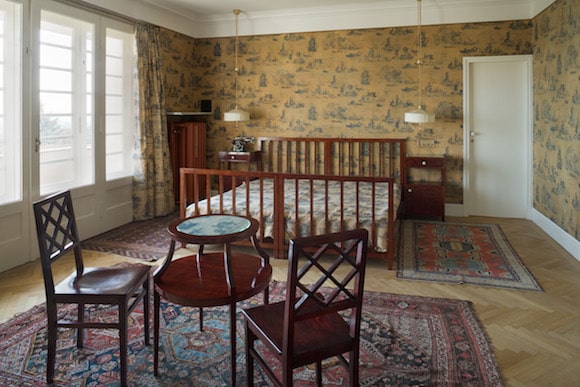 Painstakingly reinstalled during the villa’s restoration, the bedroom’s original wallpaper is from France and features a seaside motif. That pattern was carried over to the bed cover, curtains, tops of the nightstands and the two-level table. Designed by Loos, all of the furniture is veneered in pear wood. Featuring wide windows and a door to the balcony, the bedroom is bordered by Frantisek and Milada’s separate dressing rooms. 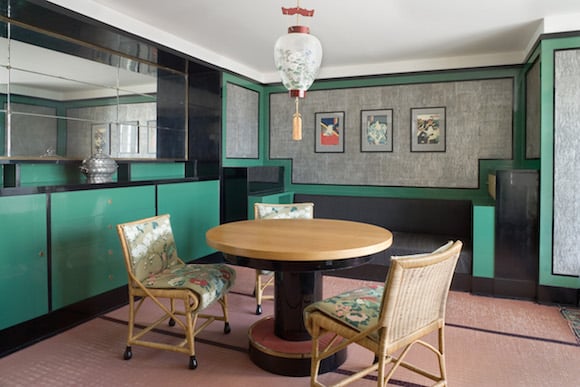 The room’s woodcuts, by Hokusai and Gototai Kunisada and part of Frantisek’s existing collection, inspired Loos to design the space in a Japanese style. Distinguished by its green and black lacquered built-ins, the room, used an alternative dining space in summer because of its cooler temperatures, includes a Japanese lantern, etchings, wicker mats and chairs — all of which are reproductions, since the originals did not survive. The three-layer wallpaper, including natural fibers laid out vertically and horizontally, is the restored original. The built-in sofa is covered in horsehair. Located in the villa’s uppermost level, the summer dining room adjoins the villa’s rooftop terrace, where a window frames a view of St. Vitus Cathedral at Prague Castle.