When one thinks of Hamptons architecture, a fairly traditional dwelling comes to mind: gray shingles and white shutters, both marked by a pleasing symmetry. But the late architect Andrew Geller had a different approach. His unconventional, cheap-yet-cheerful Long Island beachfront residences are some of the most architecturally striking summer homes you’ll ever encounter.

Geller’s career began at the industrial design firm Loewy and Associates, where he received the high-profile assignment of interpreting the “typical American house” for the 1959 American National Exposition in Moscow. Geller’s ingenious exhibition design — which bisected a full-scale prototype home — proved so novel that it sparked the infamous “Kitchen Debates” between Premier Khrushchev and Vice President Nixon.

This dialogue precipitated the Leisurama project, a design for a prefabricated vacation home that was a direct response to the Soviet assertion that the average American could not afford a second home. The Leisurama homes provided so popular that one was installed, in full, on the ninth floor of Macy’s department store in New York City. At least 200 of the mass-market Leisurama homes were sited in Montauk, NY.

At the same time, Geller was busy working on 15 “summer-use playhouses” for private commissions — each a contemplation on the form of the cube, that used a spartan structural system to expressive, rhythmic effect. These properties, located along the same Hamptons coastline, were also designed to express the personality of their inhabitants. The first of these projects came from inside the Loewy company itself, via the firm’s public relations director, Elizabeth Reese. The Reese House was designed as a place for sunbathing and meditation, and took the form of an abstracted A-Frame. Cantilevered walkways, a bedroom accessed by pulley and retractable ladder, and a free-standing fireplace flanked by windows were both fun and functional features.

Other formal variations followed suit. By rotating the rectangular house about the axis of its long edge, Geller located a signature style that was both abstract and aerodynamic, a form that was a breakthrough response to the expressionism of the times and the environment of the island. While hardly any of Andrew Geller’s low budget and low maintenance minimalist homes are still standing, their images preserve a transitional point in American residential architecture. Take a quick summer break, and scroll down to see some of Gellar’s most compelling creations. 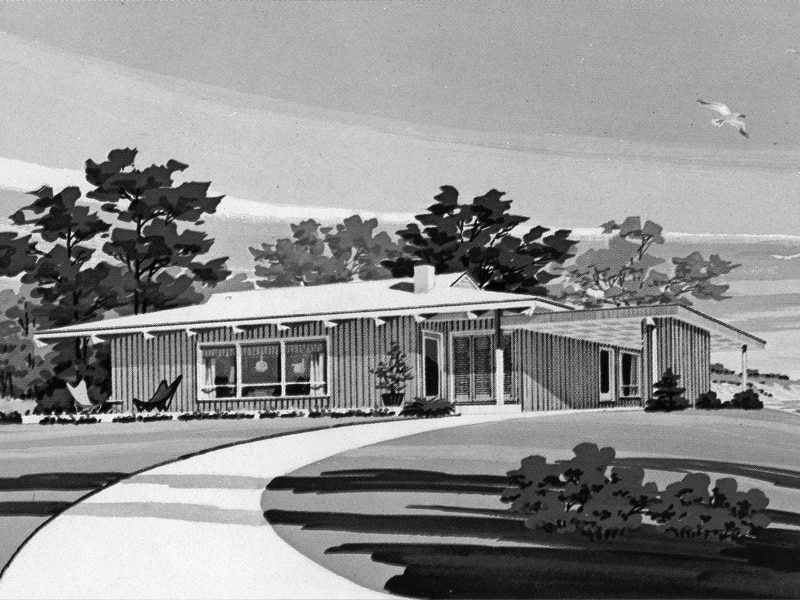 A sketch for Leisurama, Geller’s system of Montauk vacation homes for the middle class. 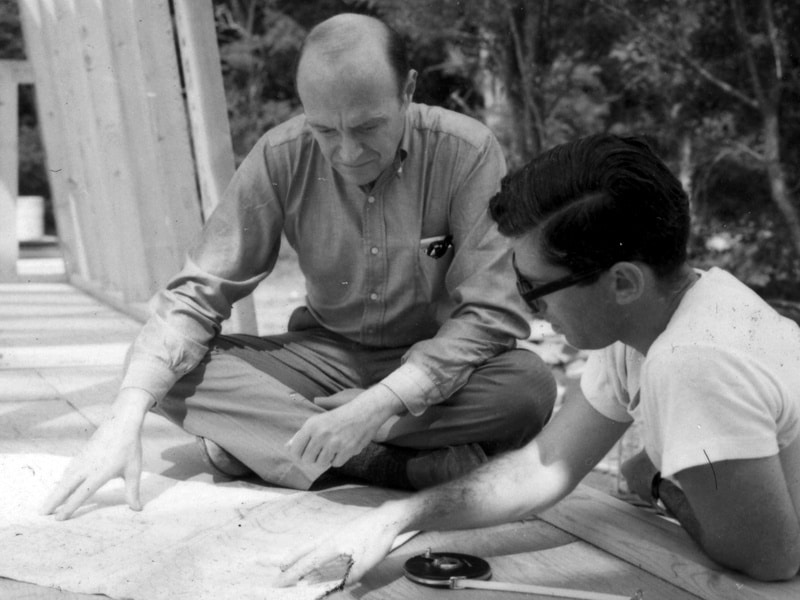 A photograph of Geller. He was passionate about the design and build process, often staying involved with the project after it was completed. 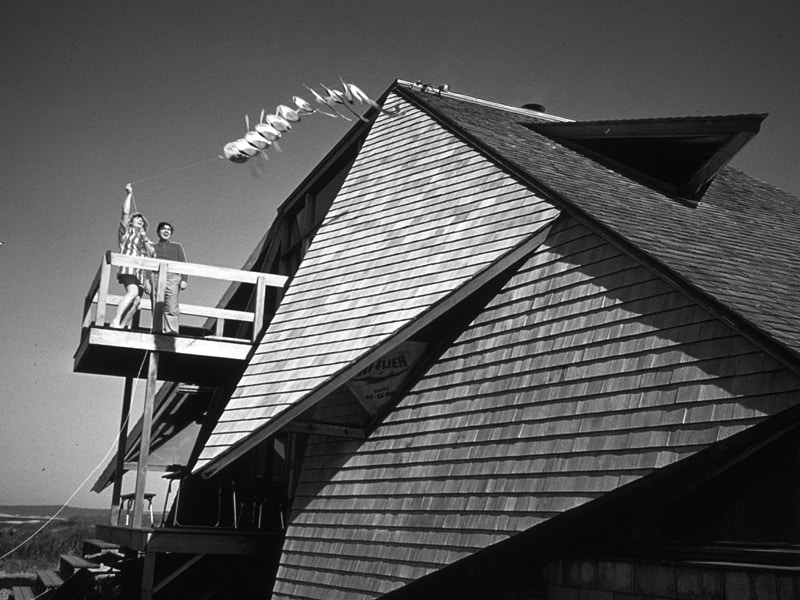 An exterior of Geller’s Levitas House, where shingled window flaps would capture and circulate breezes throughout an interior canopy. 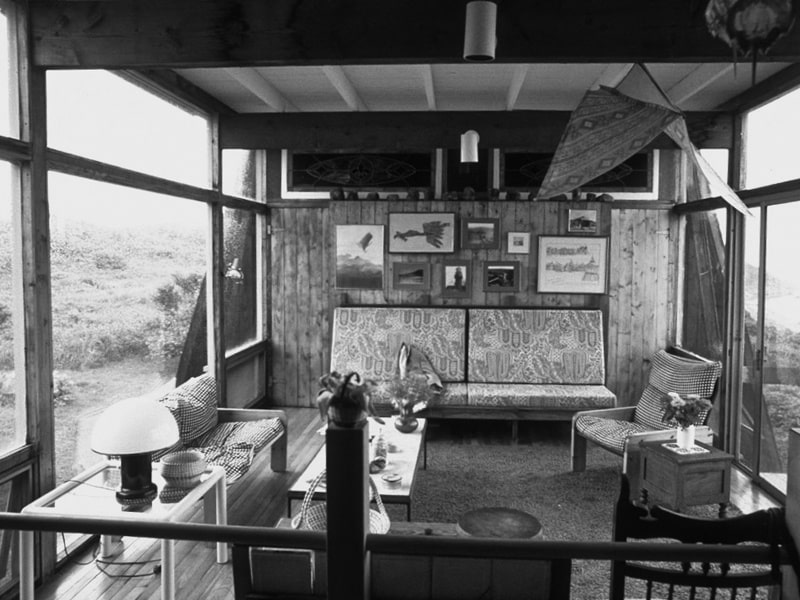 An interior of the Levitas house. Floor-length windows offered views in both directions. 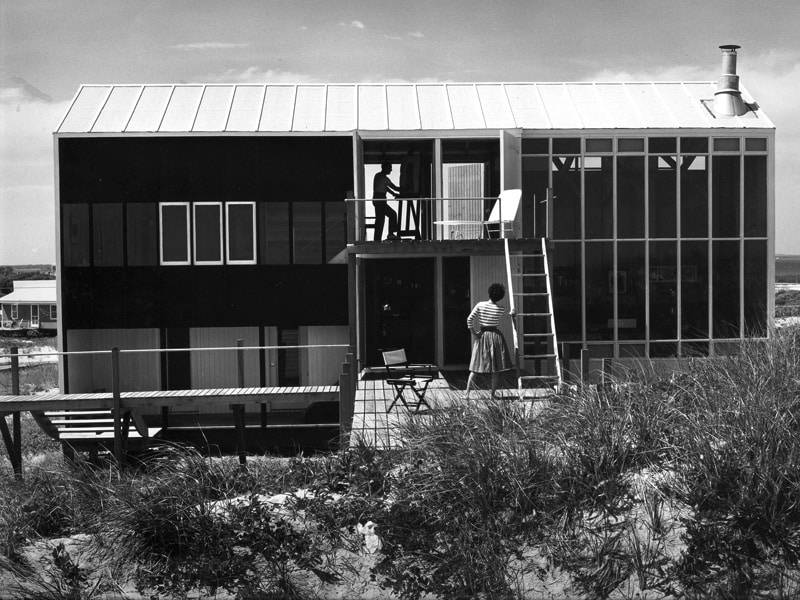 Geller referred to this home — the Jossel Loft — as his “Monopoly House” due to its relatively spare structure and shape. 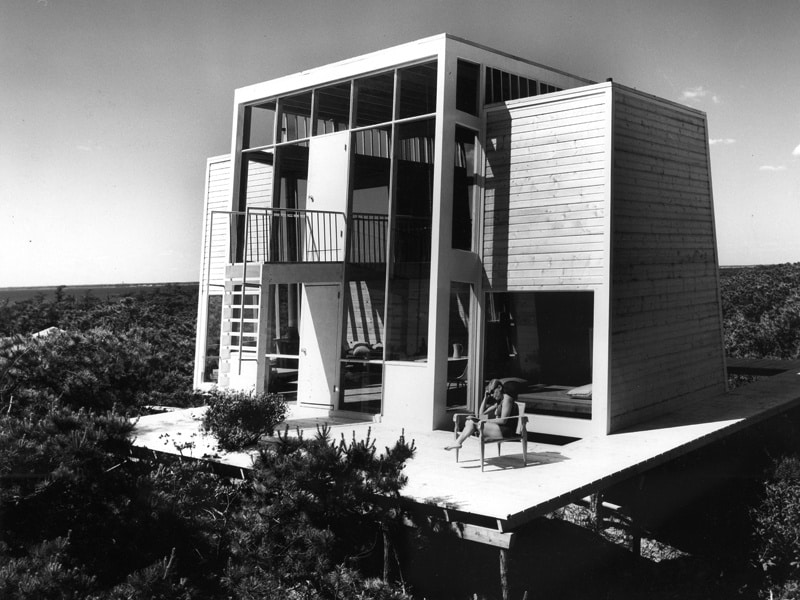 The Frank House, on Fire Island, was situated on one of the highest points of the beach. 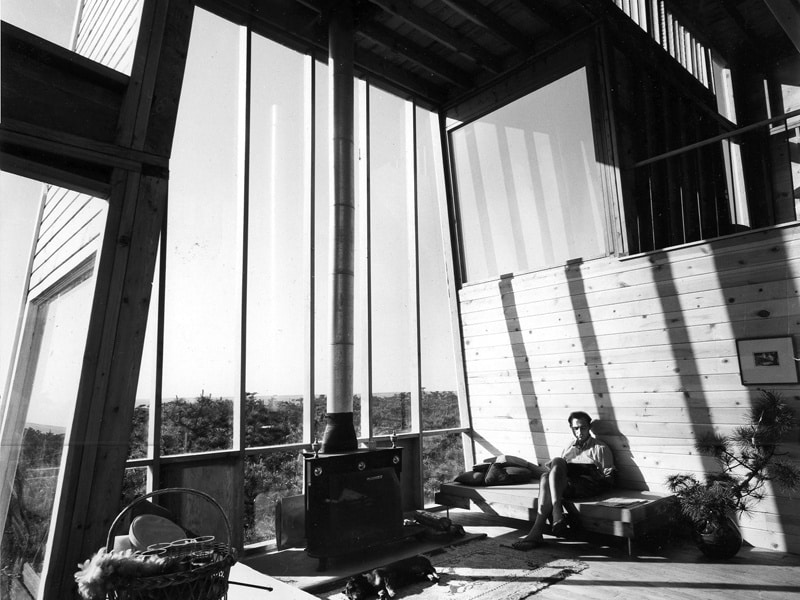 Geller not only designed the Frank House, but its interior furnishings as well. They were mostly fashioned from stock pieces of plumbing pipe and lumber. 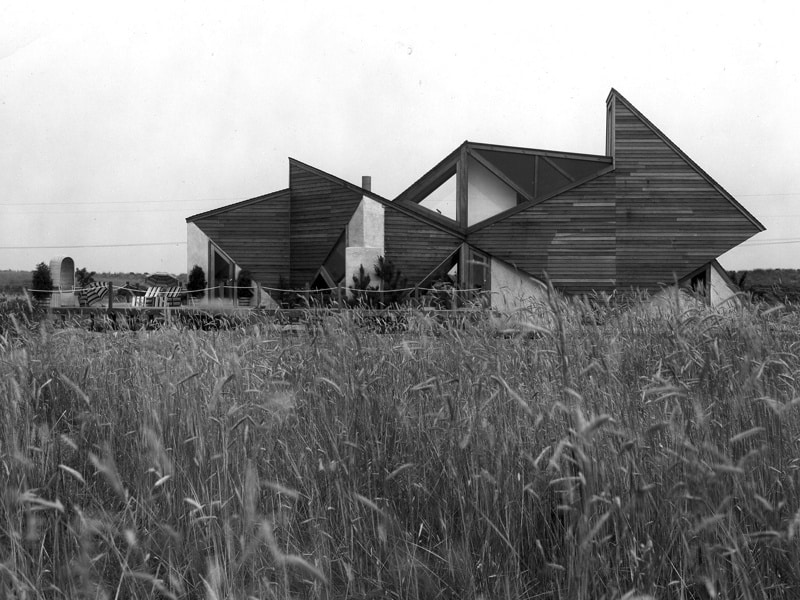 The Elkin House in Sagaponack features angular planes which one client dubbed “beer can openings.” 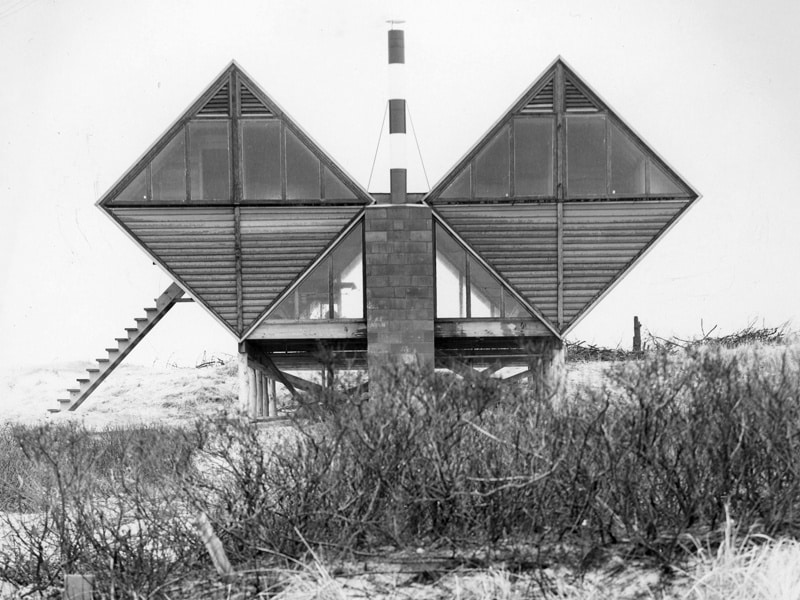 The iconic, binocular-like form of the Pearlroth House pays homage to the idea of seeing and being seen — which is perhaps why it has proven to be one of the most popular and widely published of Geller’s constructions. 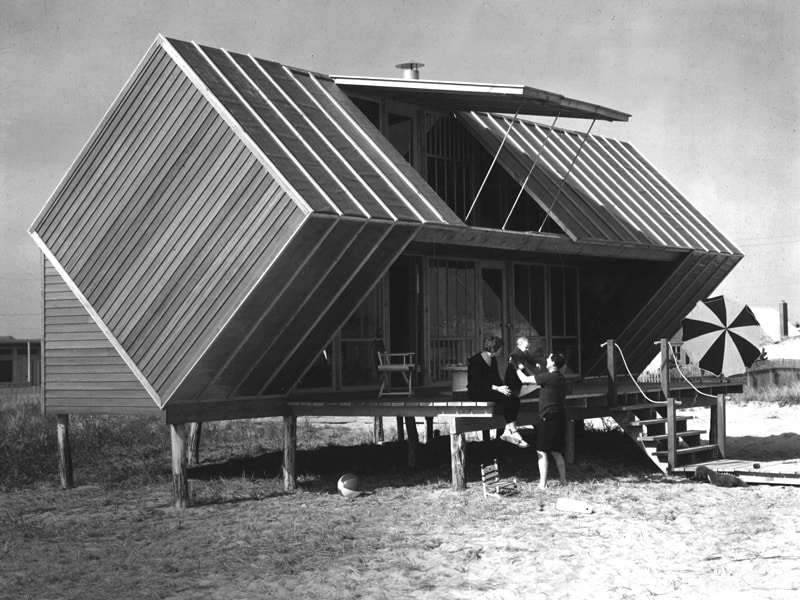 Nicknamed the “Box Kite” or the “Milk Carton,” the Hunt House’s diagonal orientation was actually a nod to Fire Island’s history of hurricanes. 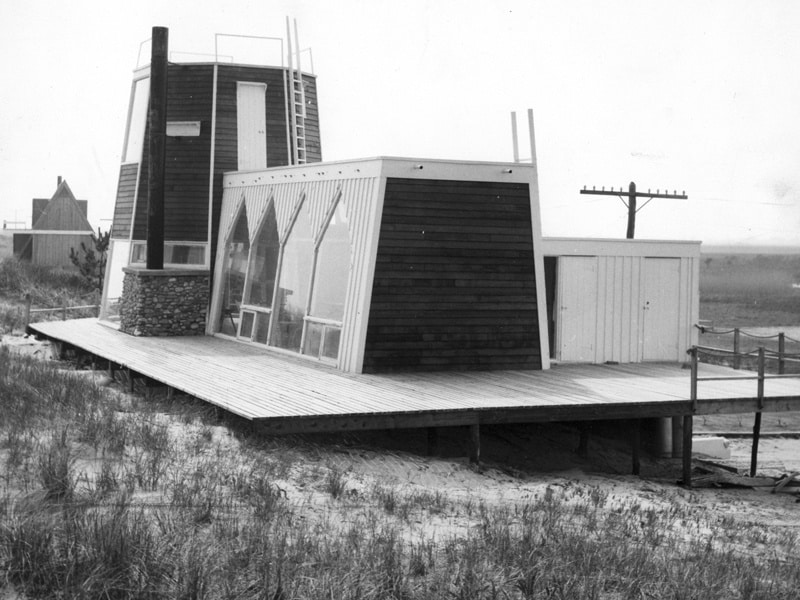 The Langman House gave its owners an Instagram-worthy vantage at the top of an octogonal crows nest, which was accessible only from an external ladder along the structure’s canted walls. One can spot the neighboring Reese House in the background. 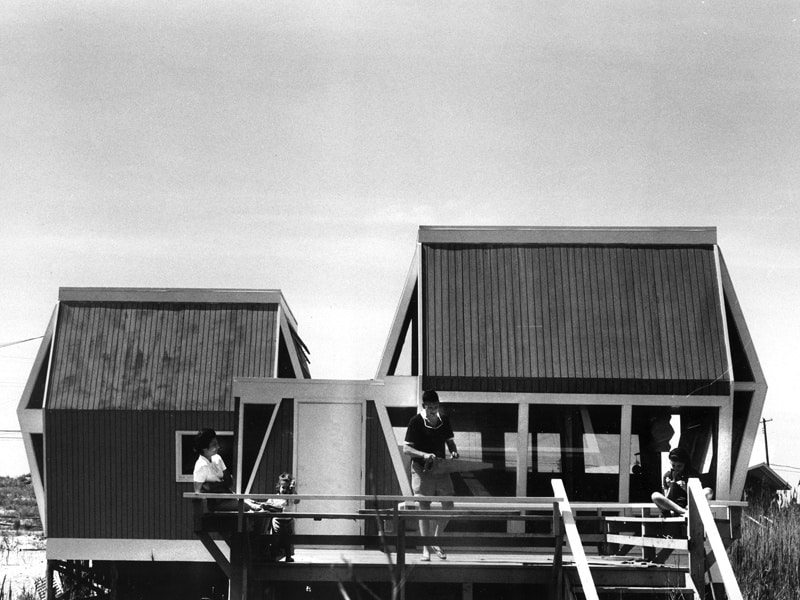 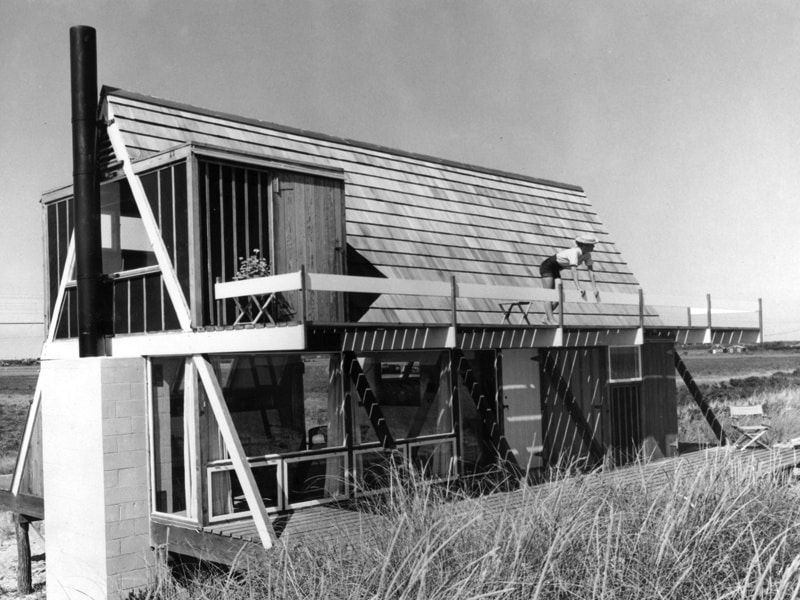 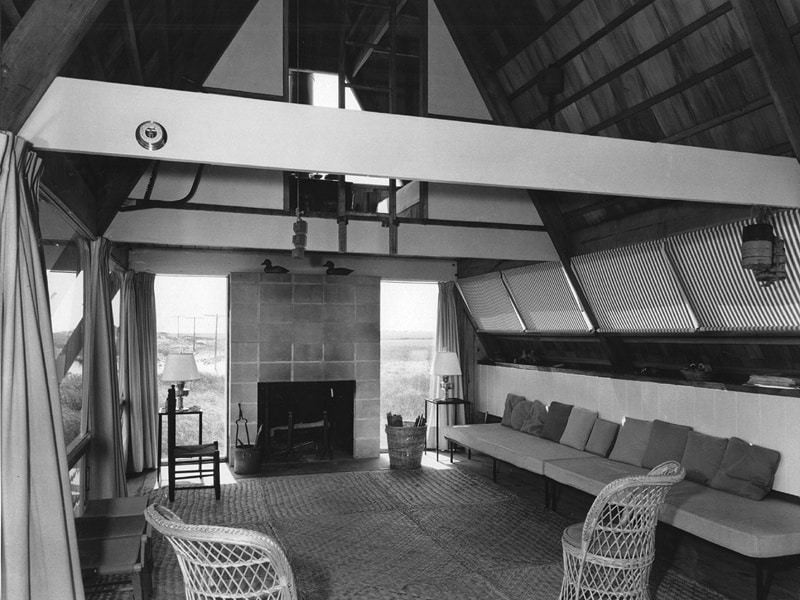 The Reese House’s lofted bedroom was accessible only by ladder.

All images courtesy of LIFE magazine via Alastair Gordon.