The 5 Most Famous Danish Lights

Danes, on average, spend 80 to 90 percent of their time indoors. No wonder they dreamed up hygge — a term encompassing coziness and conviviality. The concept developed in the 19th century as a celebration of warmth and comfort at home. And a key contributor to warmth and comfort, of course, is illumination.

As Malene Lytken explains in her new book, Danish Lights — 1920 to Now (Strandberg Publishing), Denmark’s winter days have at most seven hours of daylight. Understandably, the country boasts the world’s highest average consumption of candles.

The Danes have long been enamored of the romantic glow of candlelight. Producing that same ambience with electric lamps has been a major goal for Danish designers since electricity became common in private homes, in the early 20th century. With winter coming, read on to learn how five ingenious Danish lights have proved that creating cozy vibes is entirely possible with chic modern design and the flick of a switch.

Although most Danes didn’t have electric lighting until the 1920s, the Poul Henningsen household became electrified in 1907, when he was 13. He later recalled watching his mother struggle with the transition from the warmth of a kerosene lamp to the harsher, white illumination from the lightbulb.

It’s fair to say that finding a balance between technology and aesthetics was at the core of Henningsen’s design career. He joined the wholesale lighting firm Louis Poulsen & Co. in 1924 and the following year presented an early version of the PH 3/2 table lamp at Paris’s Exposition Internationale des Arts Décoratifs et Industriels Modernes. It featured stacked concentric shades that were mirrored and curved to guide the direction of the light. However, too much glare filtered through the clear glass.

In 1926, Henningsen finessed the design, reducing the number of shades to three, graduated in size from smallest at the bottom to largest on top. Arranged this way, they distributed the reflected light from the filament, diffusing it to effectively eliminate glare. The design, which won the highest award at the 1929 world’s fair in Barcelona, is still produced by Louis Poulsen.

When architects Eva and Niels Koppel commissioned Henningsen in 1958 to design the lighting for the restaurant in Copenhagen’s Langelinie Pavilion — newly rebuilt after being blown up during World War II — they asked for something “festive and cozy.” Henningsen delivered on the brief impressively quickly. He created the now famed Artichoke lamp in three months, basing it on his PH 5 (Septima) lamp, which had a similar staggered design.

The fixture cleverly paid homage to the globe artichoke, with 72 copper leaves mounted on its nickel-plated steel frame. The bent copper panels (whose staggered arrangement inspired its nickname “the pinecone lamp”) hid the incandescent bulb inside, reflecting its light to create a warm, radiant glow that was entirely glare-free. Still available in copper, the Artichoke is now also produced in other materials.

It’s not often that a light fixture is celebrated as much for auditory as for visual allure. But that was the case for Verner Panton’s Shell lamp. “The sound is like cow bells ringing in the distance,” said Panton, whose design garnered huge acclaim when it debuted at the Frankfurt trade fair in 1964. “It is very soothing.”

Panton cleverly hid the lightbulb behind multiple semitransparent mother-of-pearl discs — each no more than half a millimeter thick — which were connected to one another with steel rings. Each cluster was affixed to a central ceiling plate. People moving below or the natural airflow of a room would jostle them, causing a jingling sound.

The translucent discs also flatteringly diffused the light. The Shell lamp is among Panton’s many whimsical approaches to design, part of his aptly named Fun series.

Although trained as an architectural engineer, Panton was not known for technical innovation. He was, however, a masterful designer of elegant shapes that cleverly solved functional issues. One such form is the hemisphere he used in several pieces, including the Panthella (1971), whose hemispherical shade both hides the light source and acts as a reflector.

The hidden bulb shines light up into the shade, which directs it downward, where it is reflected as well by the trumpet-shaped stem. The result is a diffuse light bathing the room. In the White Opal version, the light radiates through the acrylic shade as well, creating a warm glow.

The sphere at the top of the lamp can be unscrewed, allowing the shade to be lifted off so the bulb can be replaced. In another innovation, the base can be used to hold extra cord. The lamp was released in various colors and in a chrome version, but the classic white model remained hugely popular among Danes.

As Louise Campbell, tells it, Louis Poulsen asked her to “make something cheap and uncomplicated.” In the tradition of Poul Henningsen, she came up with a design that was also aesthetically pleasing and extremely functional.

The LC Shutters lamp (2012) is made from a thin sheet of white aluminum that is shaped into a dome and then punched and perforated to create a layered effect that softens and diffuses the light from the bulb inside.

Inspired by the antiques her English mother loves, Campbell shaped the bottom edge of the sturdy shade to resemble lace trim, imbuing her creation with an heirloom quality. Despite such intricate details, the entire piece is factory made, using machinery specifically developed for it. 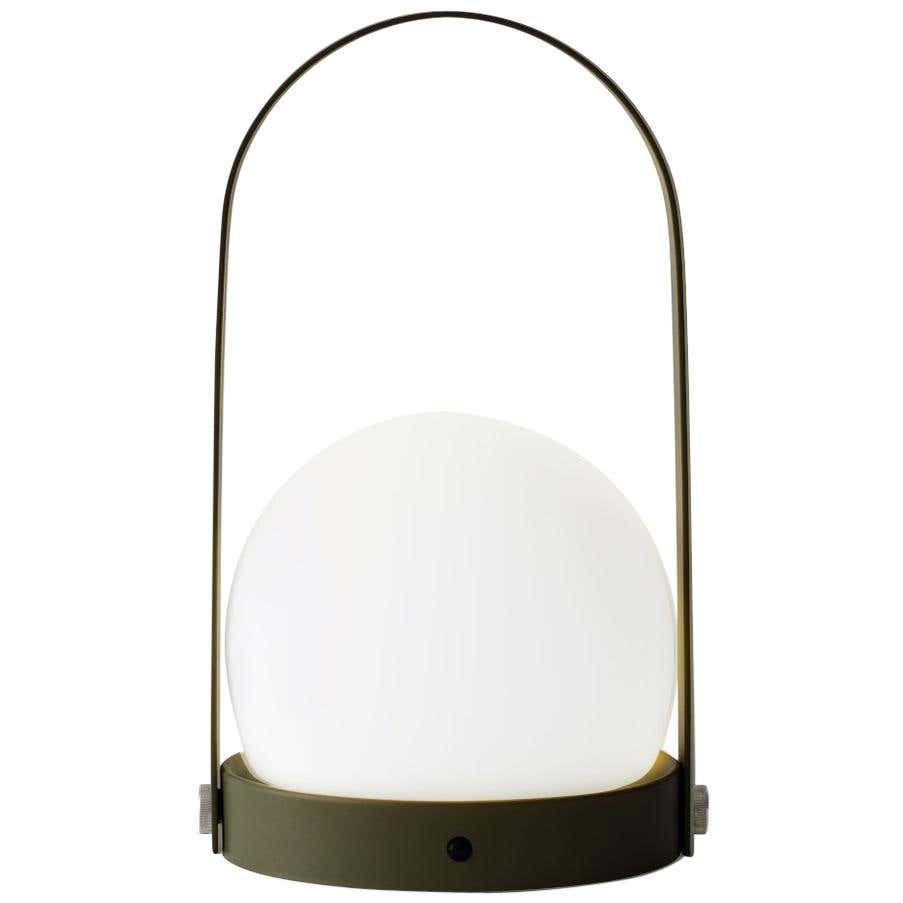 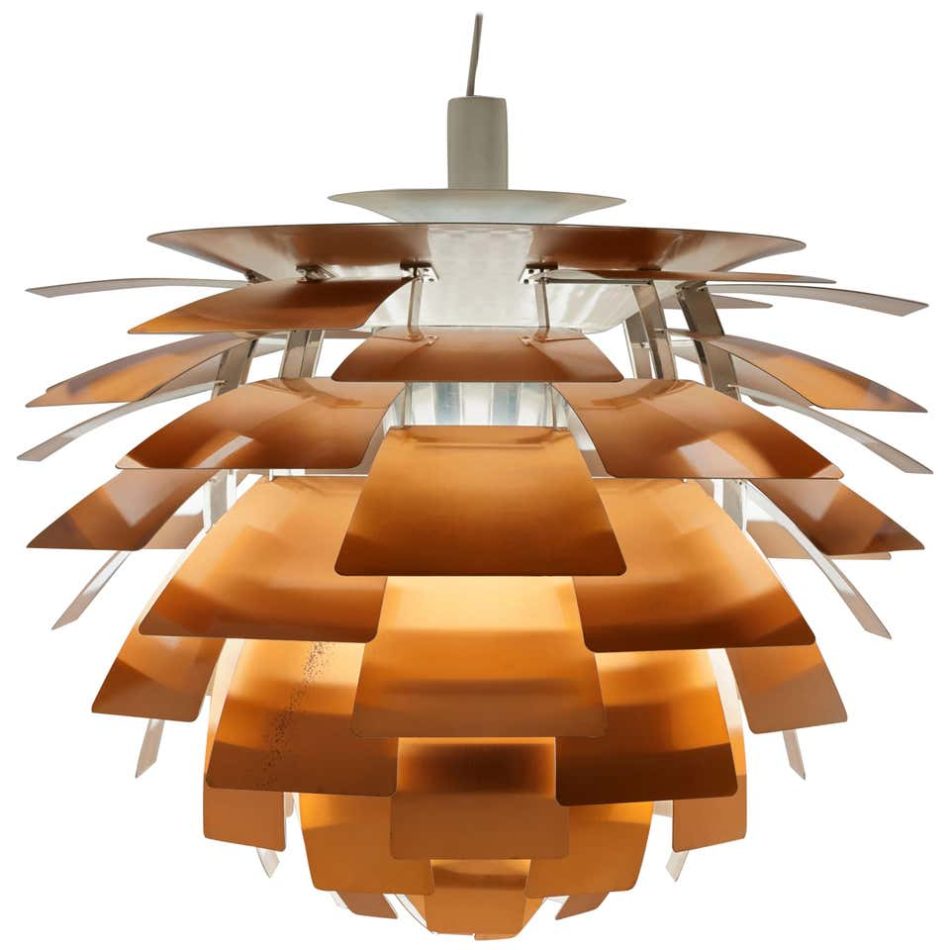 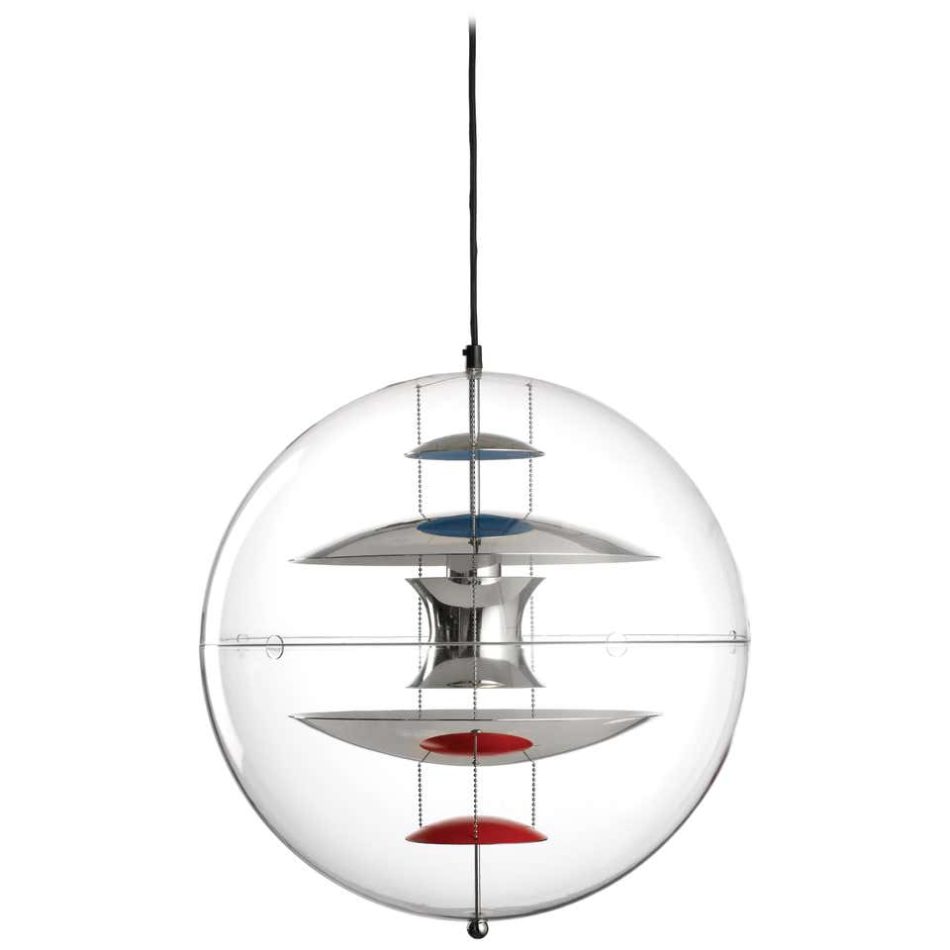 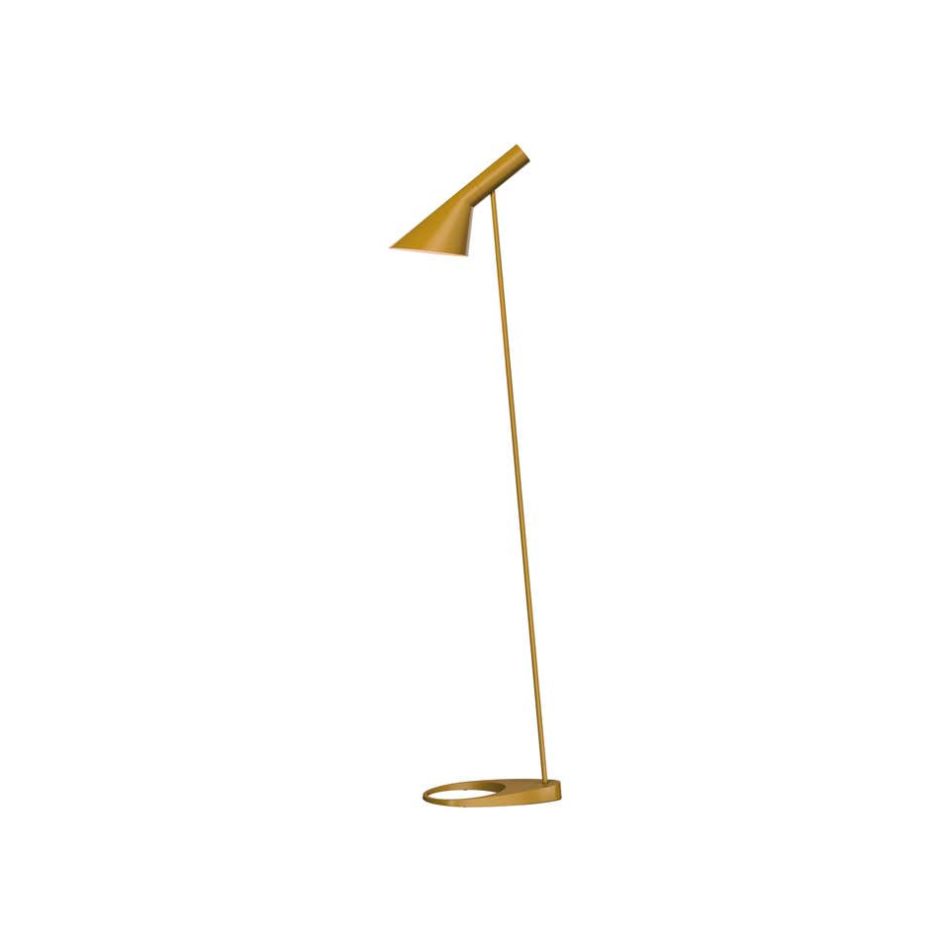 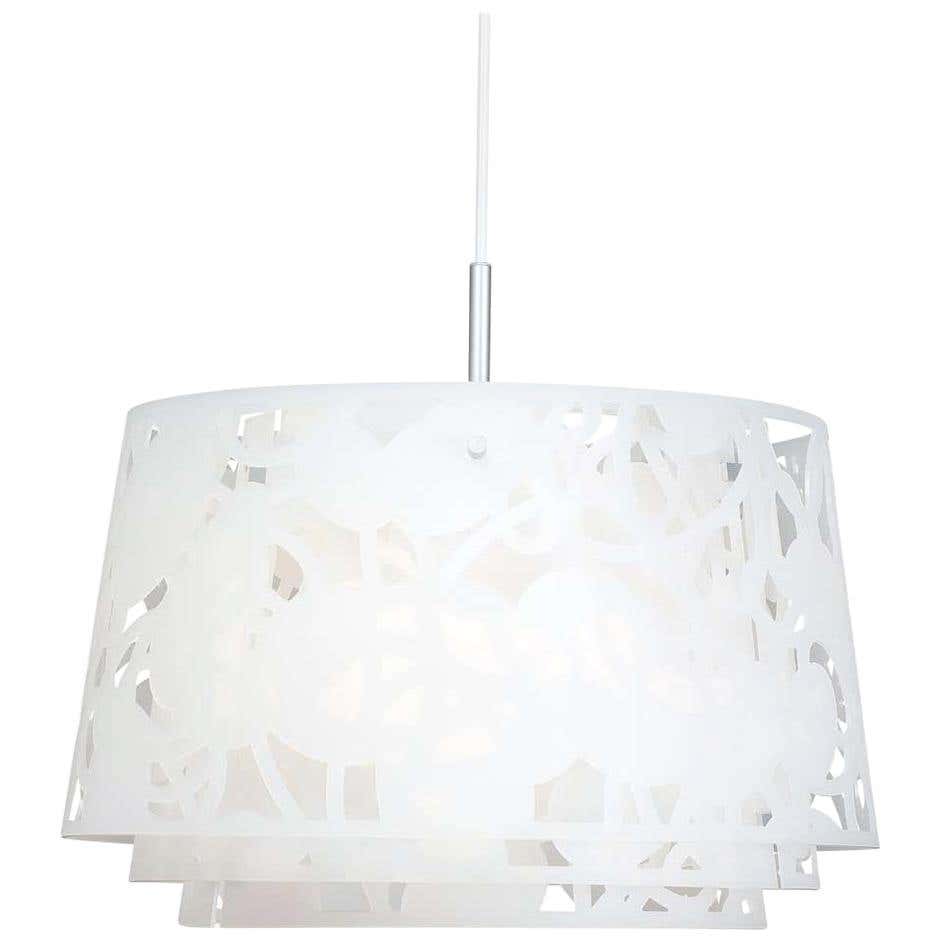 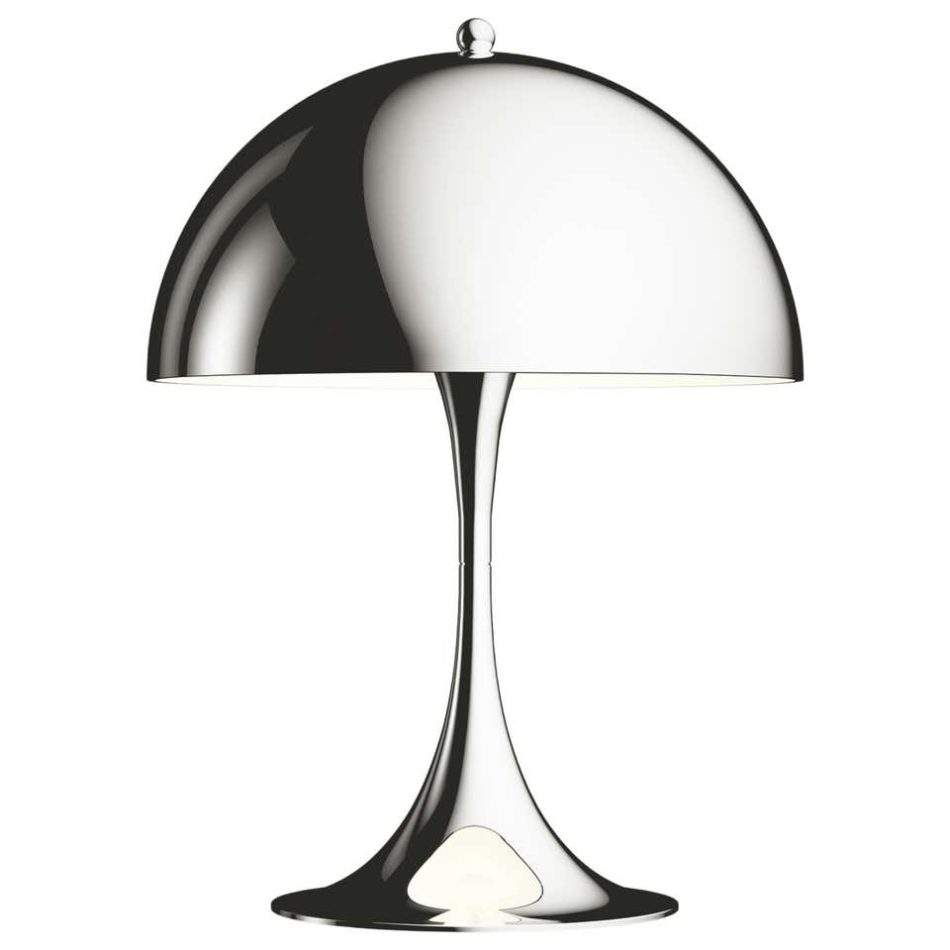 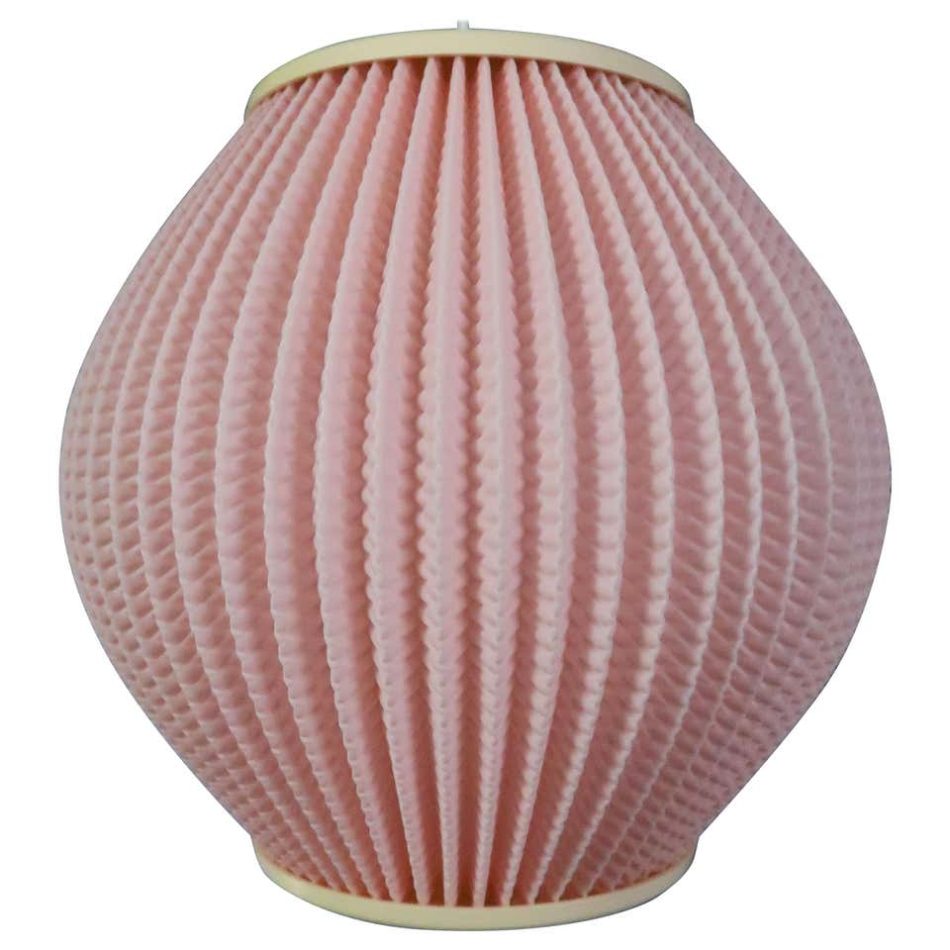 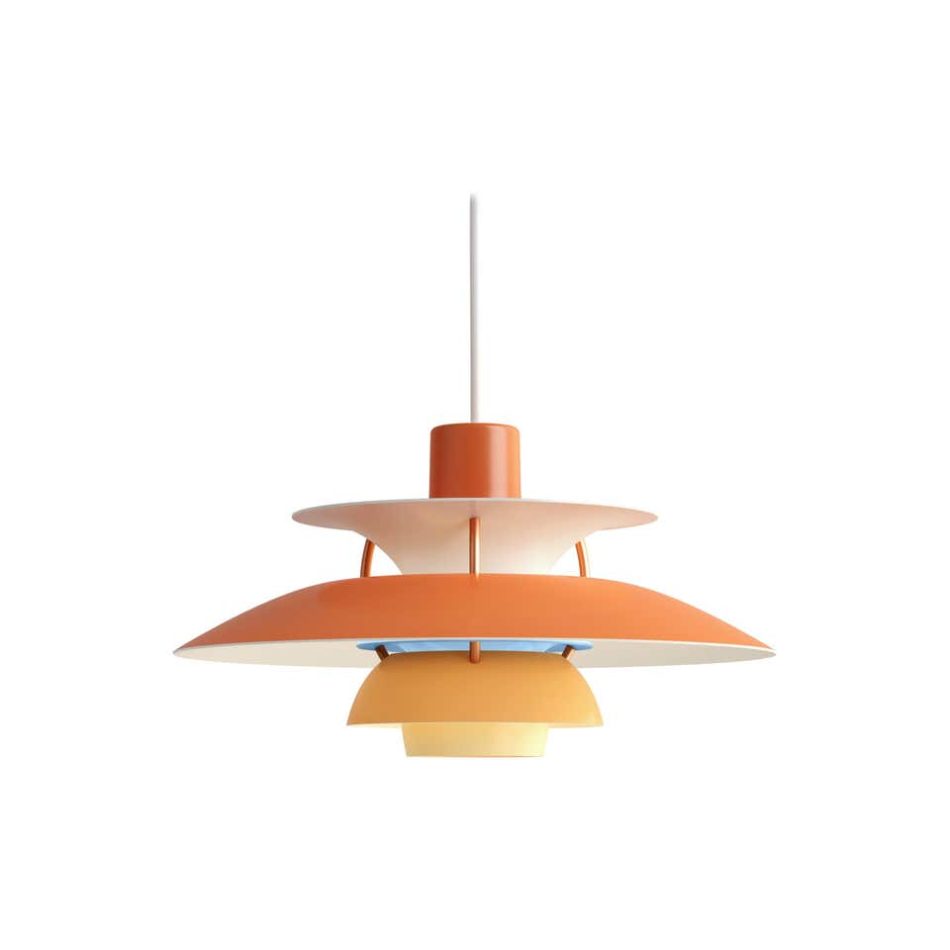