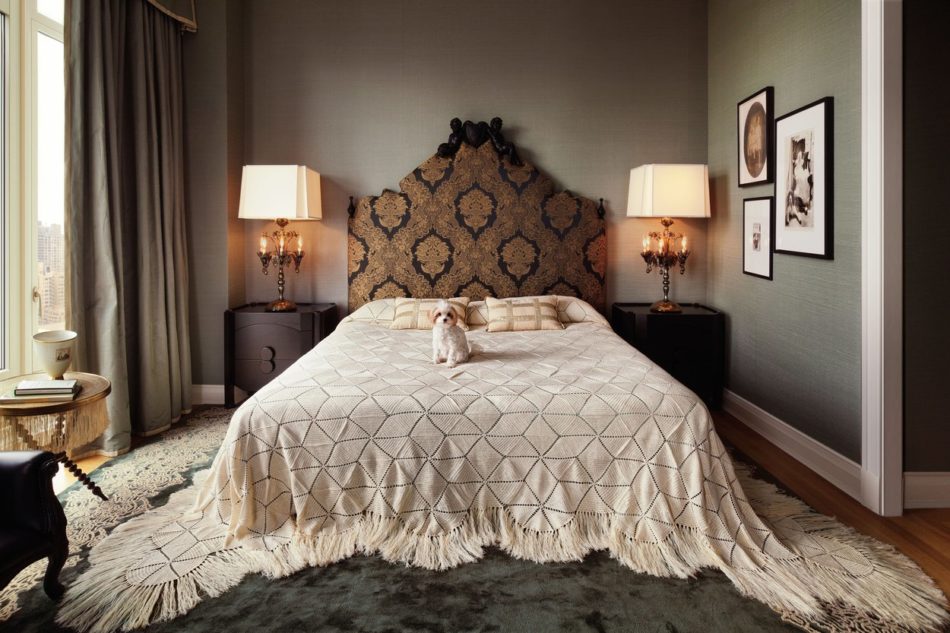 In a Manhattan high-rise, The Archers’ Richard Petit created a guest suite that brims with elegance and allure. “The apartments in this Robert A.M. Stern building are classically proportioned and detailed and echoes the work of Italian architect Rosario Candela,” says Petit. “We created our version of a Sicilian grandmother’s bedroom as a nod to Candela’s roots.” The result is an enchanting hideaway featuring walls lined in silk denim, a headboard in a Rose Cummings damask and vintage Murano lamps. Photo by Richard Petit 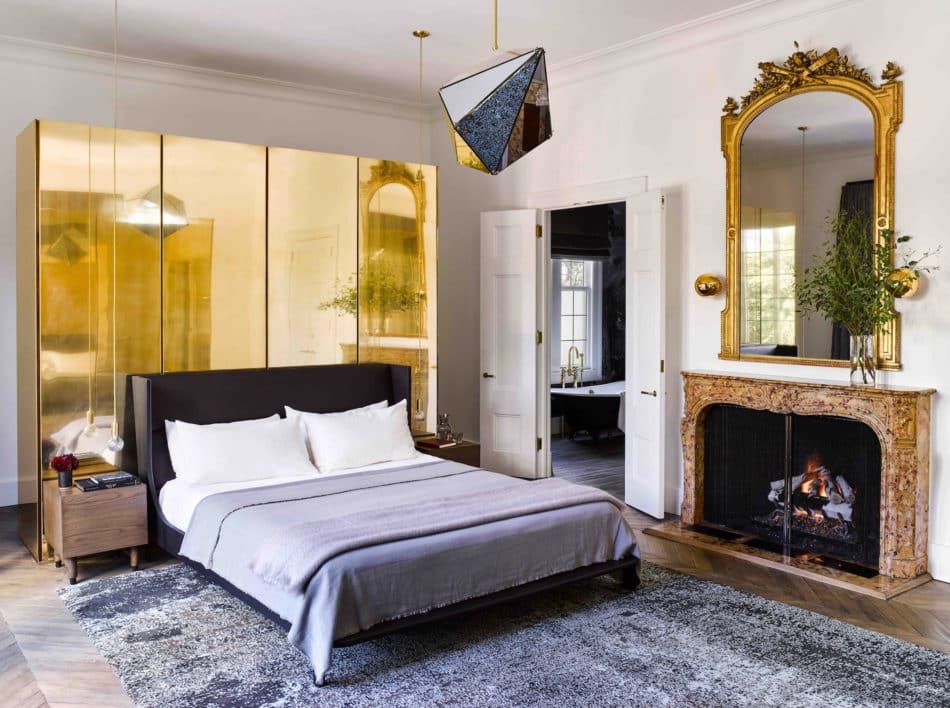 Located in a San Francisco Victorian residence that had been transformed decades ago into a classic Italianate by architect Julia Morgan, this master bedroom once served as the home’s ballroom. “The design vision entailed reimagining the room for a modern couple while still keeping its original soul intact,” says Nicole Hollis, who preserved the existing herringbone floors, period molding and marble fireplace. A bed and wall sconces by Autoban, a pendant by Bec Brittain and a custom mirrored-brass wardrobe provide sleek, modern contrast. Photo by Douglas Friedman 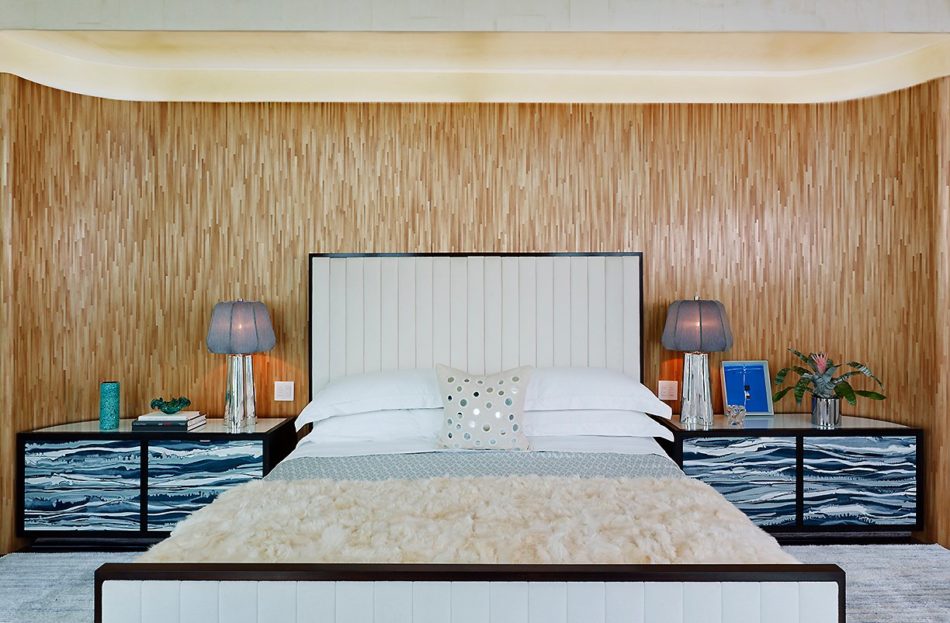 “This client bristled when I showed him a conservative scheme, and he told me to go wild,” recalls designer Ernest De La Torre of this bedroom inside a philanthropist’s Manhattan penthouse. “He was happiest in view of water, so I made the room aquatic in tone and feel.” De La Torre designed the bed, the resin-fronted nightstands and the straw-marquetry panels. “It involved splitting a reed of straw, flattening it and applying one piece at a time,” he says of the backdrop. Photo by Peter Murdock 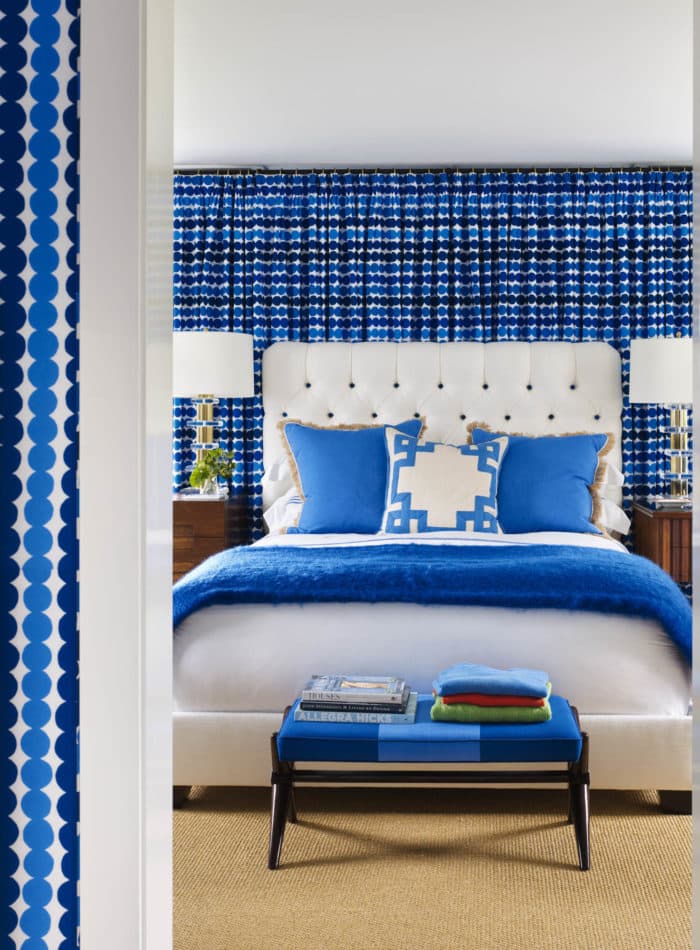 Big color and pattern define the master bedroom of design duo Gary McBournie and Bill Richards’s Nantucket residence. “Since the home is on an island, blue was a natural color choice, with the most saturated hues used in the bedroom,” says McBournie. The patterned Marimekko fabric was found in Copenhagen, the bedside chest and desk are both vintage Italian and the bench is by T. H. Robsjohn-Gibbings. Photo by Gordon Beall 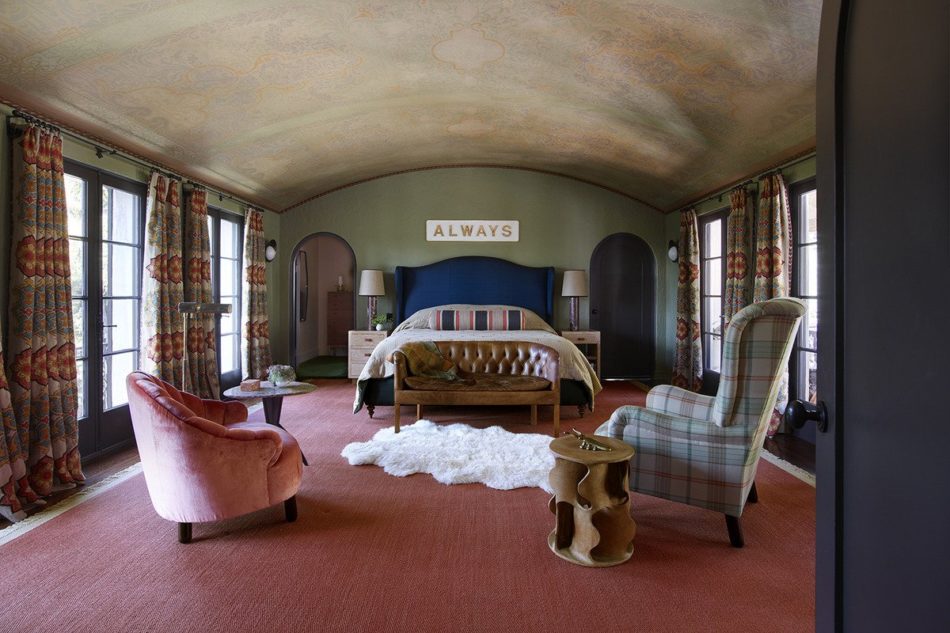 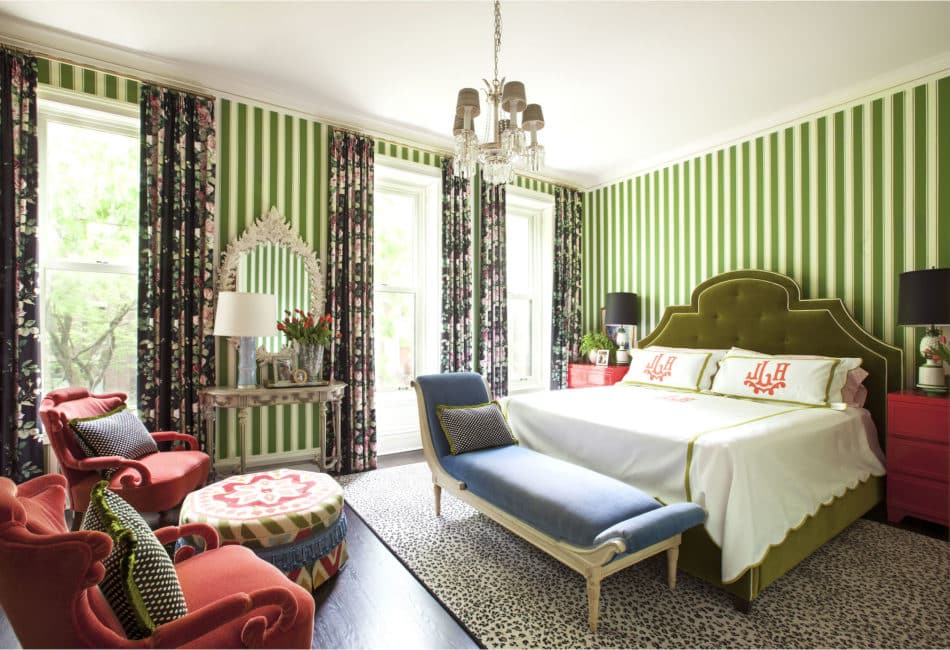 For a comedian’s master bedroom in Chicago, designer Summer Thornton took a maximalist approach. “The client wanted a home that felt vintage and whimsical, with an onslaught of color and pattern layered with reckless abandon,” Thornton says. So she lined the walls with hand-painted stripes and brought in a colorful vintage mix that includes an elegant chaise longue and coral nightstands, along with a 1930s French chandelier and 1940s Italian pineapple lamps. The leopard-print rug is from Stark. Photo by N. Johnson, B. Ambridge, J. Thornton 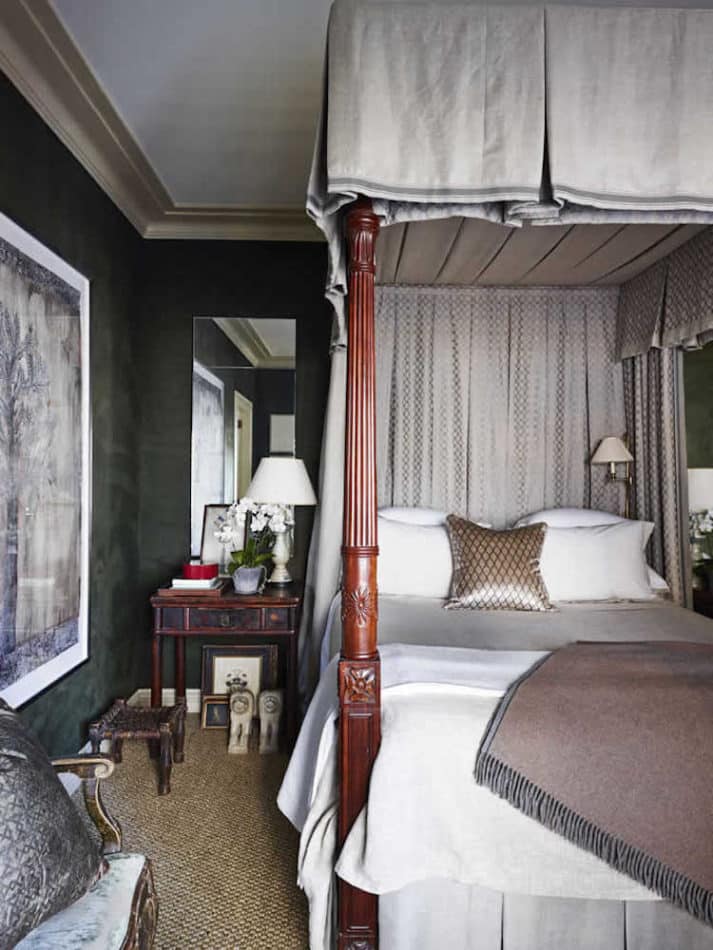 In his Sydney penthouse bedroom, Thomas Hamel says he sought to conjure up “the feeling of a self-enclosed cocoon to escape city life and the buzz of traffic below.” The mix of furnishings includes an array of eclectic finds, from the draped Georgian bed to the 19th-century elm bedside table to the carved Indian lions. Hamel says he covered the walls in olive-green ultrasuede to “add depth and texture to the entire room.” Photo courtesy of Thomas Hamel & Associates 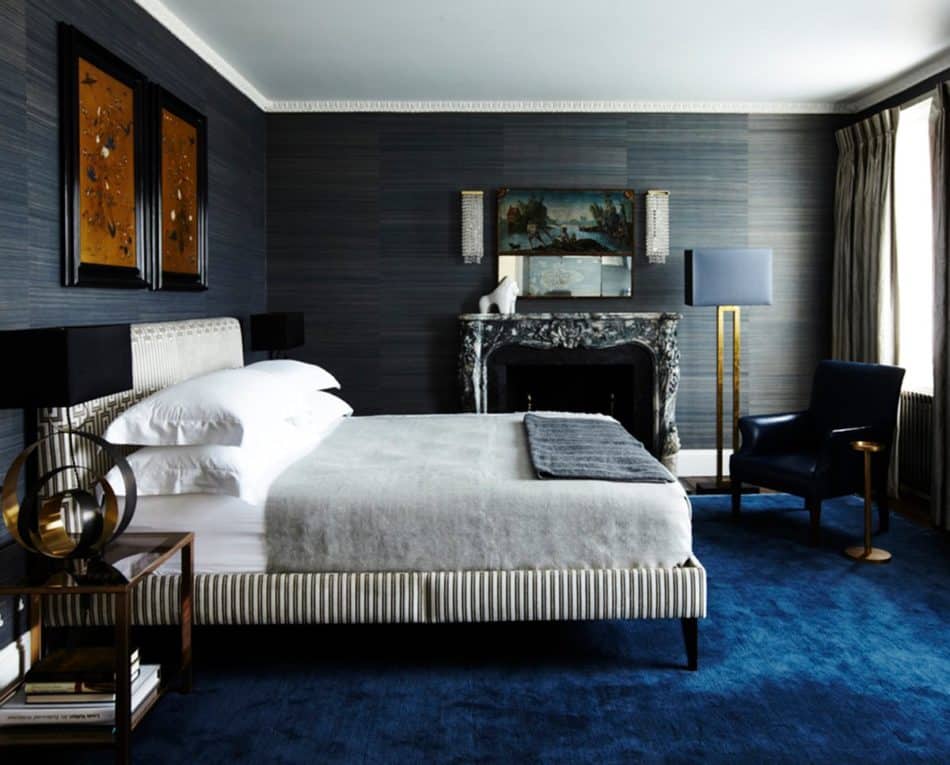 Located in a 19th-century villa in Notting Hill, which was transformed from a run-down hotel into a glamorous private home, this master bedroom by London designer Peter Mikic exemplifies masculine sophistication. With its rich palette of blues and grays and furniture that includes a dark-leather chair, lustrous cobalt-blue rug and ornate sconces, Mikic beautifully blends luxury with comfort. Photo by Kate Martin 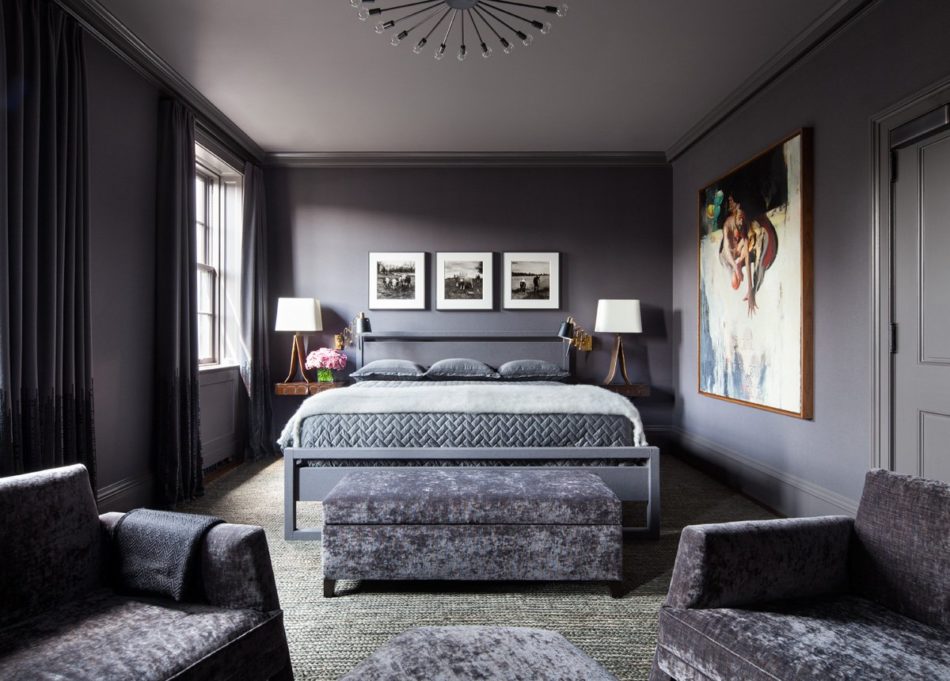 Warm, dark, and masculine is how Shawn Henderson describes this luxe boudoir in a 19th-century West Village townhouse. “I wanted it to feel like a cocoon,” says Henderson, who dressed the bed, draperies and walls in elegant gray fabrics from Holland & Sherry, added vintage Italian floating nightstands, and pulled in seating by Lloyd Wright (“not Frank,” he notes). Photo by Steven Freihon 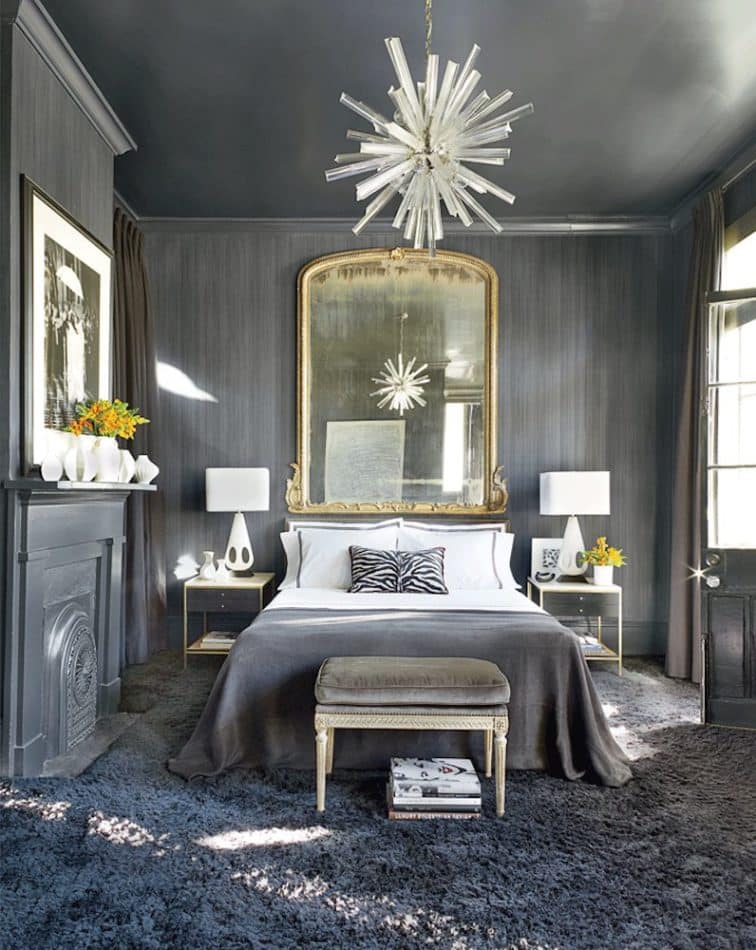 To set a dramatic tone in this New Orleans guest room, Lee Ledbetter opted for decadent touches, such as moody washed wallpaper, a vintage Murano snowflake chandelier and a massive 19th-century gilt-wood mirror. “We wanted to create a dark cocoon that would feel protected and restful,” says Ledbetter. The bed is flanked by a pair of vintage Paul McCobb tables topped with Italian carved-marble lamps. Photo by Pieter Estersohn 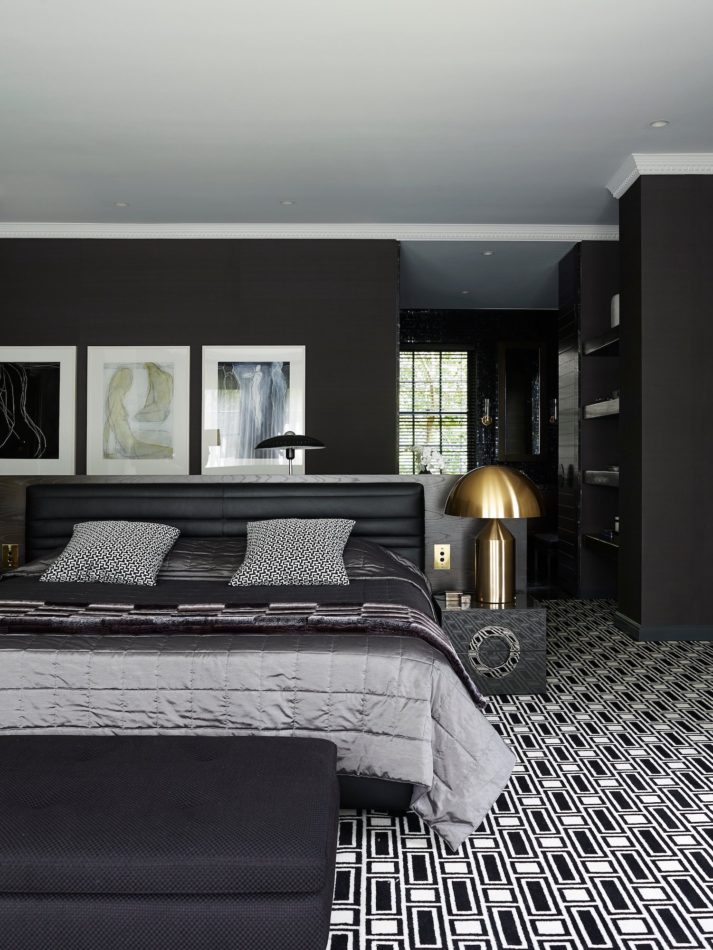 Australian designer Greg Natale homed in on his clients’ love of moody interiors when updating their expansive home. “We set about layering the traditional interiors with a more contemporary, edgier character. This was achieved by introducing a lot of black and increasing contrast through color and pattern,” says Natale. In the monochrome master bedroom, Natale added layers of texture with dark grasscloth wallcoverings, a geometric carpet and graphic bed linens. Vico Magistretti’s Atollo lamp adds a dose of glamour. Photo by Anson Smart 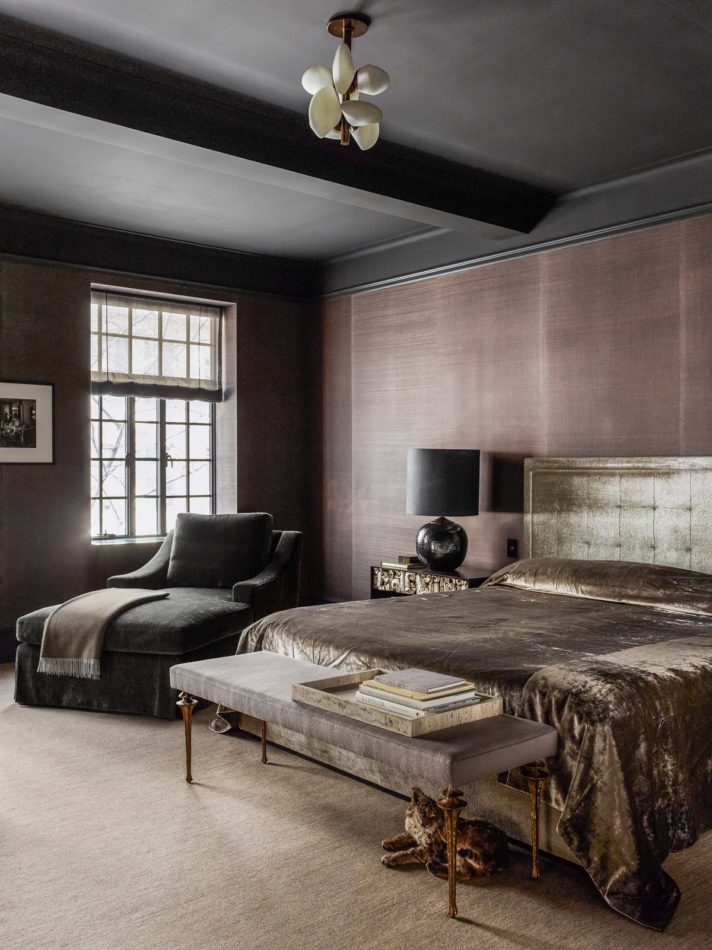 In renovating a Manhattan home, David Mann created this bedroom, which reflects his high-contrast approach to the spaces — from the white foyer to the deep-brown dining room. “The culmination is here, the dark master bedroom,” he says. “I also took inspiration from the building, an excellent example of storybook style that is Pre-war, Emery Roth, Park Avenue.” Amid the grasscloth walls are a custom bed, chaise and bench along with a 1950s Italian chandelier from Kerson Gallery, found on 1stdibs. Photo by Eric Piasecki/OTTO 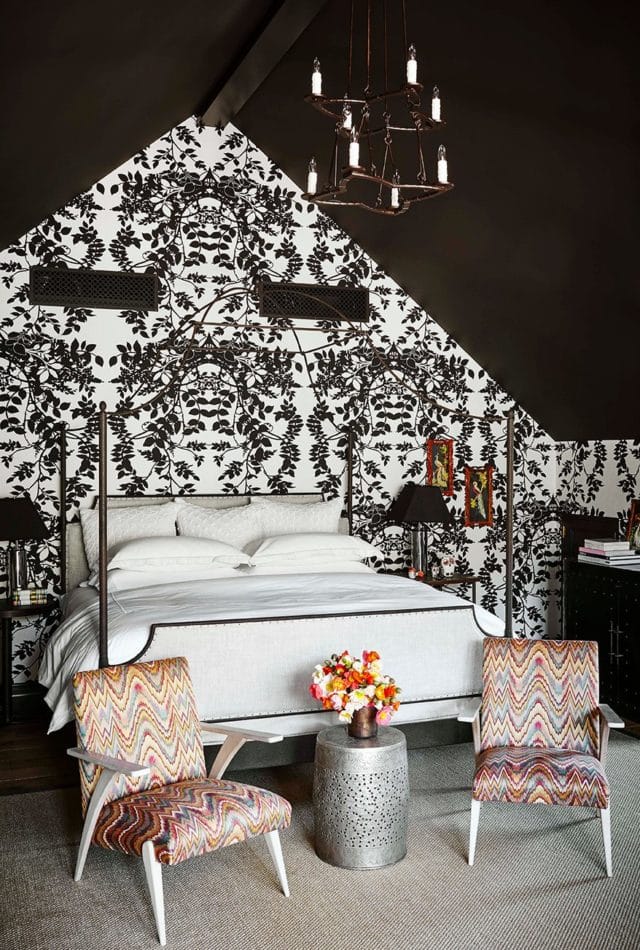 Wit and whimsy are part of Ken Fulk’s signature design vernacular, which comes to life in this lake house, a grand spectacle reminiscent of a Victorian-era hotel, located in Sonoma, California. In one of the nine bedrooms, each featuring a different wall motif and color scheme, a fantastical wallpaper serves as a dreamy backdrop to an iron canopy bed while vibrant reupholstered mid-century chairs and a silver garden stool inject a dose of sparkle. Photo by Douglas Friedman 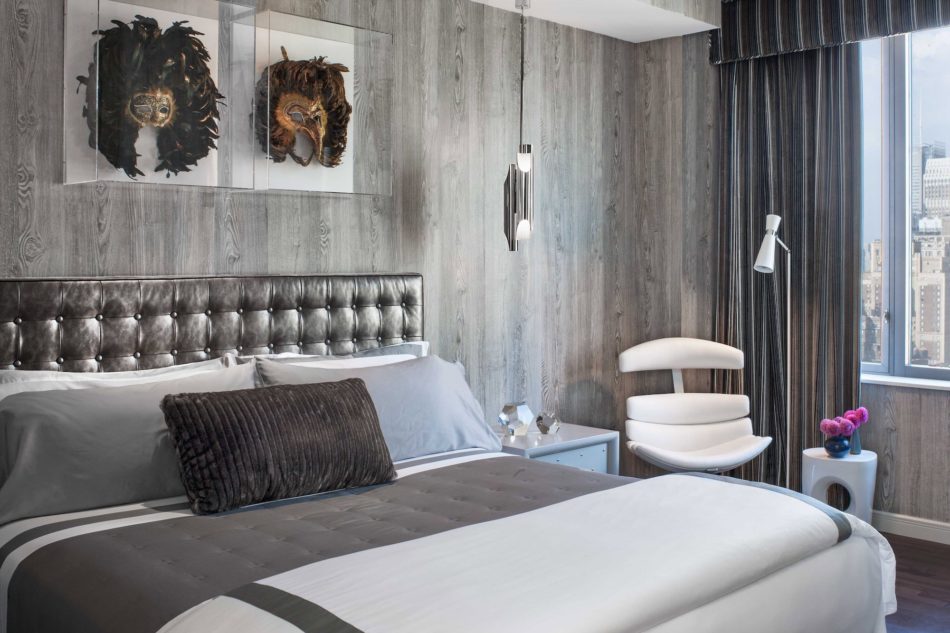 “I wanted the overall feel of the master bedroom to be sexy, warm, and inviting with a masculine touch,” says designer Nicole Fuller of this lavish retreat in a Manhattan apartment. “The masks were a big part of my inspiration for the overall design and palette of the room,” says Fuller, who designed the metallic leather bed. The Tommi Parzinger nightstand and vintage floor lamp were found on 1stdibs, and the white leather chair and side table are from Flair. Photo by Nicole Fuller Interiors 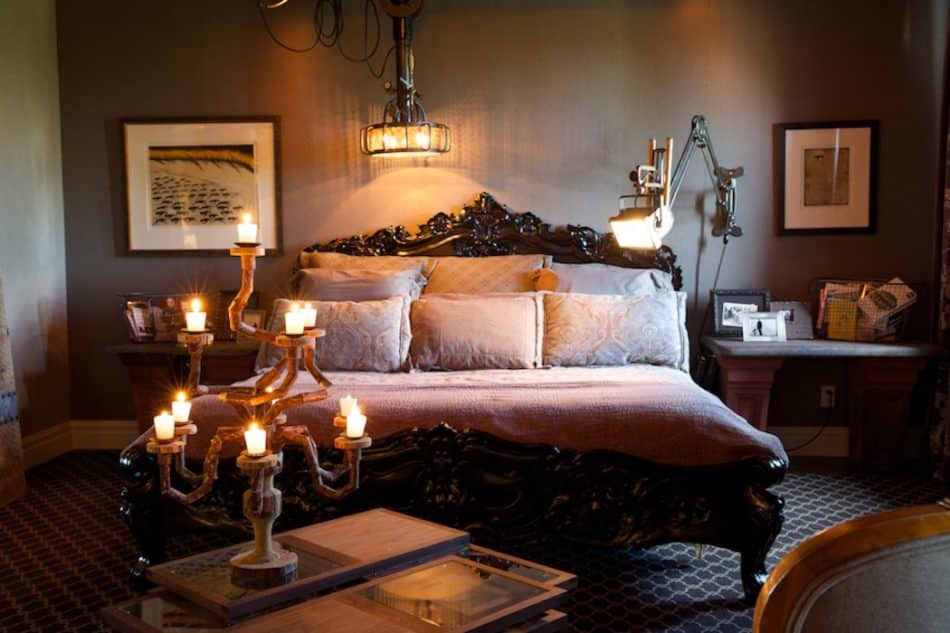 For a family home in Canada, designer Paul Hardy skillfully combined the husband and wife’s differing modern and traditional tastes. “The challenge was to blend hard and soft elements to marry the two aesthetics of the couple within the confines of pre-existing French country architecture,” he says. In this bedroom, it translated into a dramatic ebony Baroque bed and English corbels that were fashioned into side tables, which were found on 1stdibs along with the industrial swing-arm reading light. Photo by Phil Crozier 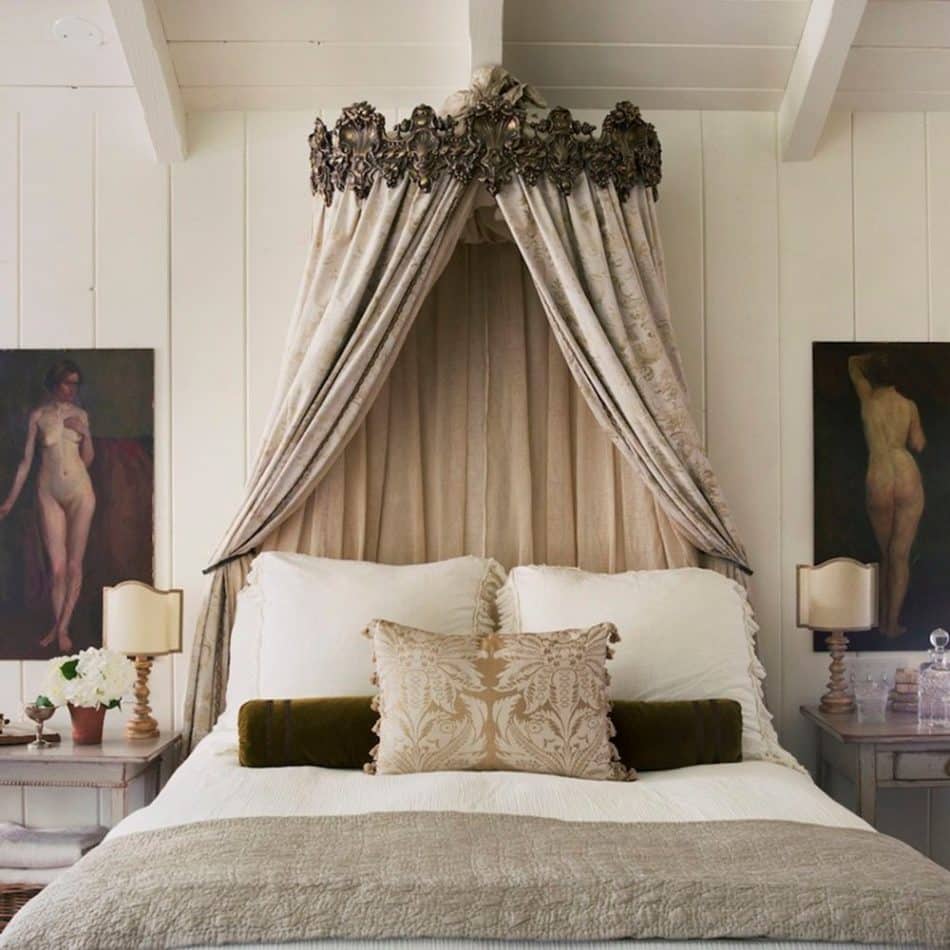 For Brooke and Steve Giannetti of Giannetti Home, the perfect room reflects the passage of time. In their California home, antiqued elegance meets serenity in the master bedroom. “We used a calm, neutral palette and antiques made of natural materials that age beautifully over time,” she says of the timeworn treasures, which include an ornate bed crown, Venetian lamps and nudes from the flea market. Photo by Lisa Romerein 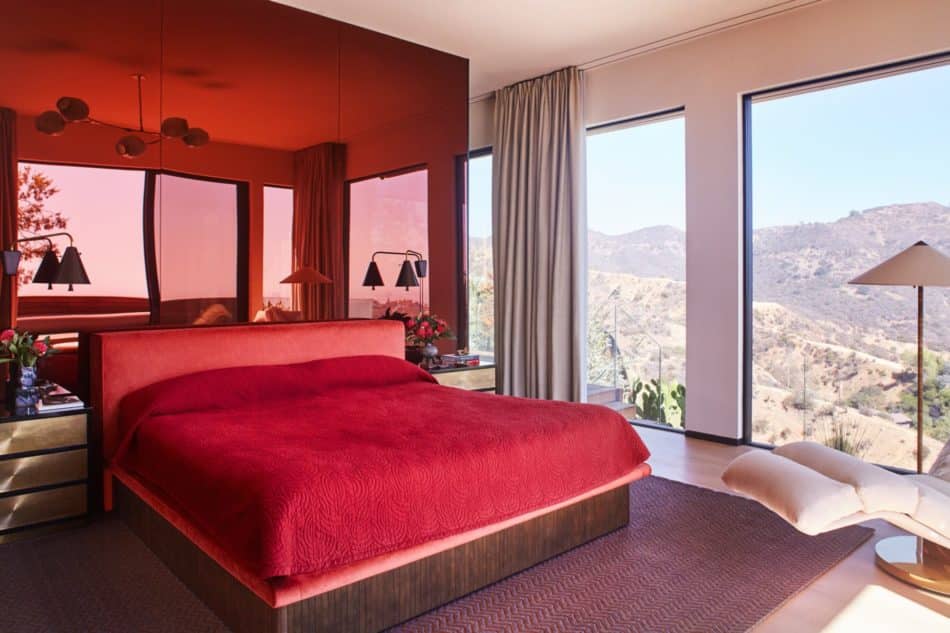 In renovating a 3,000-square-foot home in Hollywood, California, designer Pam Shamshiri created a space that captures her client’s modern aesthetic mixed with a ’60s sensibility. The high-voltage bedroom, with its reflective red partition, exudes glamour and warmth. Photo by Roger Davies & Sam Frost 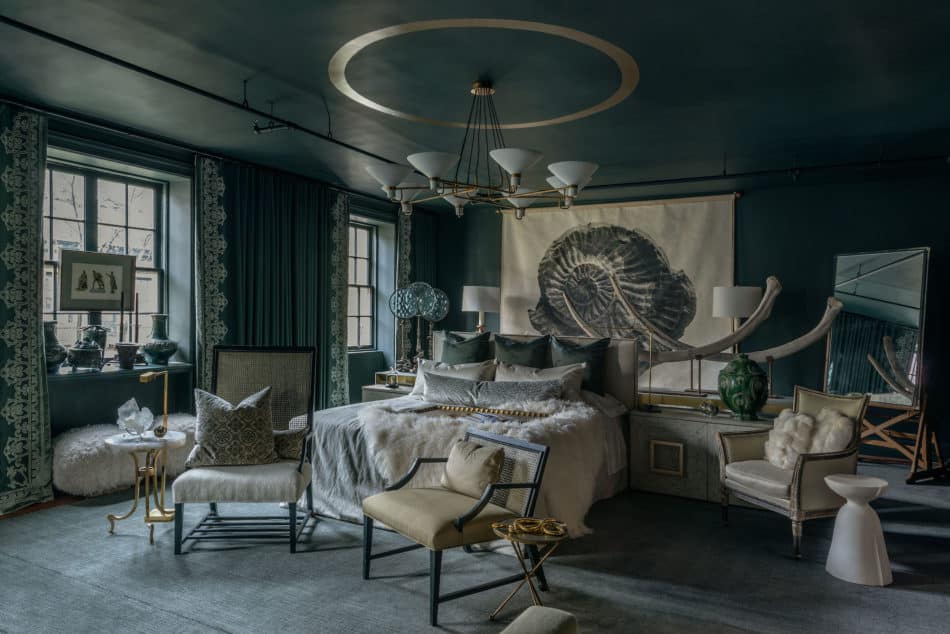 In her Kips Bay Decorator Show House bedroom, Susan Ferrier had the vision of designing an elegantly eclectic hideaway for an archaeologist, channeling an Explorers Club vibe. She was inspired by a large-format Ammonite drawing that once hung in her office, which informed the rest of the furnishings and accents. Meanwhile a set of lithographs from the 1800s inspired the moody color palette. Photo by Alan Barry Photography 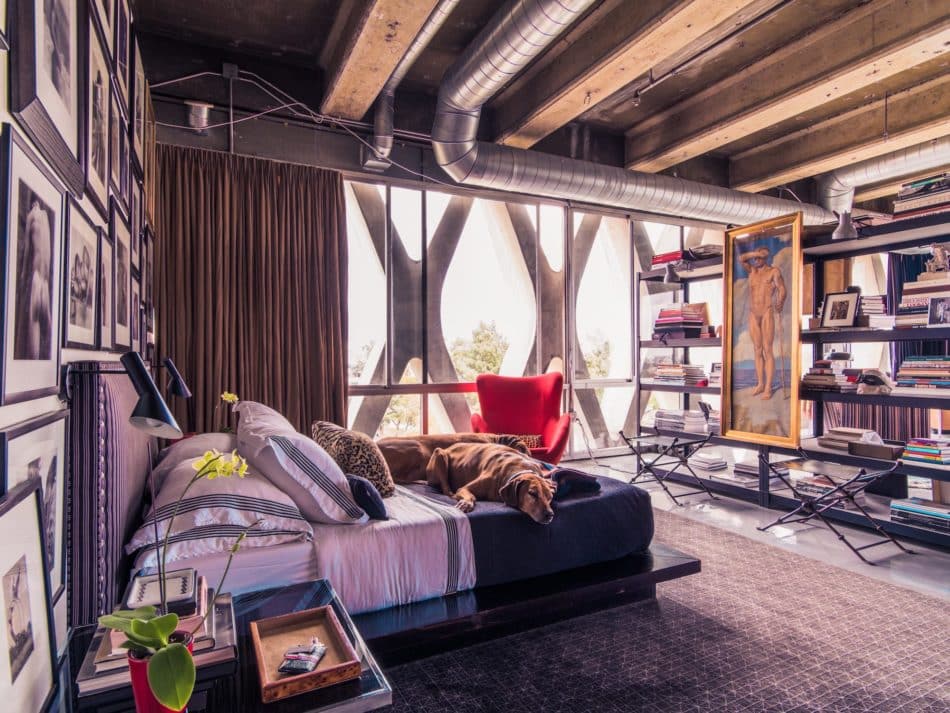 When it came to his mid-century loft in Los Angeles, located in the American Cement Building, designer Todd Yoggy sectioned off the industrial space with an open bookshelf to carve out a cozy bedroom. “It was easy to create a dramatic mood with 12-foot walls of glass looking out to giant concrete X supports,” says Yoggy. The space includes vintage Morgan Colt benches, Louis Poulsen wall sconces and an Arne Jacobsen Egg chair. Photo by Eric Schwabel