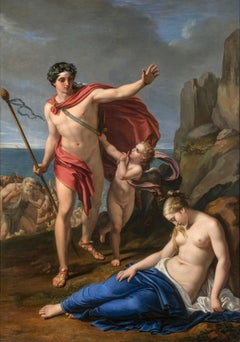 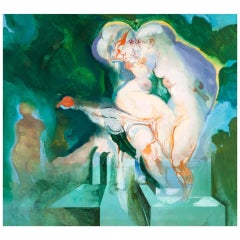 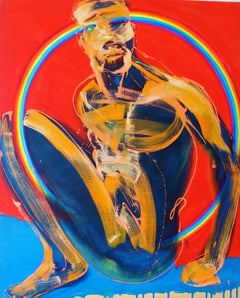 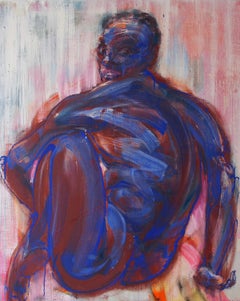 Untitled
By STM
Located in London, GB
'Untitled', oil on board, by STM (circa 1970s). A vibrant modern painting inspired by Picasso and Braque, the artist uses angles, lines and colour to create an entirely new dimension...
Category

Body I - Contemporary Painting
By Elvire Ferle
Located in Paris, FR
Corps I, painting by French contemporary artist Ferle. Oil on free-standing canvas, W 140 cm x H 200 cm // W 55 in. x H 78 3/4 in. "The figures painted by Ferle are of a Michelangele...
Category

The Reincarnated Icon
Located in Ibadan, Oyo
You were born a child of light’s wonderful secret you return to the beauty you have always been. Painting Ships in a well-protected tube from Nigeria This work is unique, this is no...
Category

There is a Life I Would Rather Be Living
Located in Denver, CO
"I am an artist and painter exploring female-centric visions and stories of violence, resistance, and tribulation inspired by women’s complicated history in the American West. Growin...
Category

Grace Kennison
There is a Life I Would Rather Be Living, 2022

El Pariaso Perdido (Paradise Lost) Diptych, Two Female Nudes, Oil on Panel
Located in Chicago, IL
The piece is based in the narrative poem Paradise Lost, written by John Milton in 1667. The author does a self-interpretation of Adam and Eve’s original sin and their later exile fro...
Category

Surface - contemporary figurative female nude underwater blue oil painting
By Bill Bate
Located in London, GB
Bill Bate: ‘I have always been inspired by the human figure and the effect light has upon it. I have used various ways of portraying the body such as dance, swimming and also boxing ...
Category

Membrance of the Dawn - Surreal Symbolism in Highly Detailed Original Painting
By Oliver Hazard Benson
Located in Chicago, IL
This painting, like each of the paintings in the Purple Dawn series, is based on an earlier work that was lost or destroyed in the course of time. Feeling that I wanted to finish wha...
Category

Oil on Canvas Painting -- Living Room
By Gary Masline
Located in Troy, NY
Despite it's undramatic title, "Living Room", this oil painting is cloaked in mystery. A woman lies prostrate before a large brown fireplace in what appears to be a gesture of anguis...
Category

Pyrrhus - Original Oil Painting of a Fighter in Shorts Sitting in the Ring
By Peter Lupkin
Located in Chicago, IL
In what appears to be a moment of defeat, the subject sits glassy-eyed in the corner of a boxing ring. A momentary respite, perhaps, before he begins the voluntary abuse to his body...
Category

Peter Lupkin
Pyrrhus - Original Oil Painting of a Fighter in Shorts Sitting in the Ring, 2017

Female Nude study, from the back in pastel blues and greens
By Karl Walch
Located in Woodbury, CT
Karl Walch, Impressionist figure and landscape painter from the latter part of the 20th century. He painted in the South of England but also travelled and painted in other parts of t...
Category

Karl Walch
Female Nude study, from the back in pastel blues and greens

Bacchus and Ariadne
Located in New Orleans, LA
The love story of Ariadne and Bacchus is the subject of this monumental early Neoclassical work by the Italian artist Pietro Benvenuti. The composition depicts the moments after Thes...
Category

The Walk - Contemporary Figurative Oil Painting, Sea, Beach View, Realism, Woman
By Julita Malinowska
Located in Salzburg, AT
Artodyssey "Julita Malinowska's paintings belong to those, which once seen - are never forgotten. The open spaces, sometimes cool and bright, at other times heavily saturated with co...
Category

Heart I - Spatial Installation Painting Object, Contemporary Figurative Painting
By Katarzyna Swinarska
Located in Salzburg, AT
Please ask me about the shipping costs. Because we can pack the art object well but lighter and the shipping will be slightly cheaper than the shipping price now generated by the sys...
Category

Sergei Kovalenko
In The Forest , 2015

Her Freedom
Located in Brooklyn, NY
This person had an identity crisis as child. She found her voice through music and dance. She walks as a Queen now.
Category

Man and Bird
Located in Palm Desert, CA
A painting by Paul Wonner. “Man and Bird” is a Post-War painting, acrylic on paper by Bay Area Figurative artist Paul Wonner. The artwork is signed in pencil in the lower right, "Pau...
Category

Lounging Nude
By Reza Afrookhteh
Located in Los Angeles, CA
Reza begun studying art seriously at age 15 and was studying at the institute of art in Iran where he graduated with highest honors. He also studied privately with one of Persia’s m...
Category

That Beauty Queen
By Ruth Owens
Located in New Orleans, LA
[ New Orleans, LA :: b.1959, Augsburg, Germany ] In 1959, Ruth Owens was born to a young German woman and a Black serviceman from Georgia. The nomadic military lifestyle of her chi...
Category

Nude Studies
By Harriet Holden Nash
Located in Buffalo, NY
Harriet was born and raised in Brooklyn, New York, and lived with her husband in Park Slope for over 35 years. She attended the Brooklyn Museum School at age 14 where she establis...
Category

Impressionist Reclining Nude laying on a bed
By Albert de Belleroche
Located in Woodbury, CT
Count Albert de BELLEROCHE 1864–1944 Painter of portraits and genre, and lithographer; influenced by Impressionism. Born 22 October 1864 in Swansea, of Huguenot descent. Brought up b...
Category

Citherean Venus
By Gian Berto Vanni
Located in New York, NY
This painting, titled Citherean Venus, is part of a long series of works where G. B. Vanni explores mythological themes from all over the world. This is the artist visual interpretat...
Category

Today, antique and vintage nude paintings are popular works of art to consider when decorating your home.

The nude as an artist’s subject gained prominence in ancient Greece, wherein male nudes were rendered equivalent to power and victory owing to the Greeks’ celebration of men in athletic events as well as in the worship of the gods who populate Greek mythology. Nude sculptures in Greece positioned men as warriors — strong, moral and fearless. The naked female figures featured in prehistoric art and the art of ancient civilizations, on the other hand, were symbols of fertility and procreation.

Italian painters of the 1400s looked to the magnificent nude sculptures of Greek and Roman art for inspiration. By the end of the century, drawing of undressed models was part of the common practice for these artists. When Christianity had spread through Europe, however, Christians condemned Renaissance nude paintings — most of which are considered famous nude paintings today — because they were erotic, exploring, in some cases, same-sex relationships as well as women’s sexual power. Censorship was the order of the day, except for religious-themed works, such as 1526’s iconic Adam and Eve, an oil painting made by German Renaissance painter Lucas Cranach the Elder, one of more than 50 works made in his workshop based on the biblical story. Tuscan painter Daniele da Volterra was famously hired to paint fig leaves over the most exposed figures of Michelangelo’s Sistine Chapel. While freedom of expression for artists has expanded significantly since then, prudish censorship persists when it comes to Renaissance nudity.

On 1stDibs, find a wide variety of authentic antique and vintage nude paintings, from works focused on the reliably reclining figures of Impressionist-style art to oil paintings created by contemporary artists who often work to reject the idealized human forms and unrealistic depictions of female nudes that preceded them. Additionally, find a primer on 1stDibs on how to arrange wall art as well as tips on creating salon-style gallery walls for presenting the wonderfully provocative nude paintings you’ve decided to bring into your home. 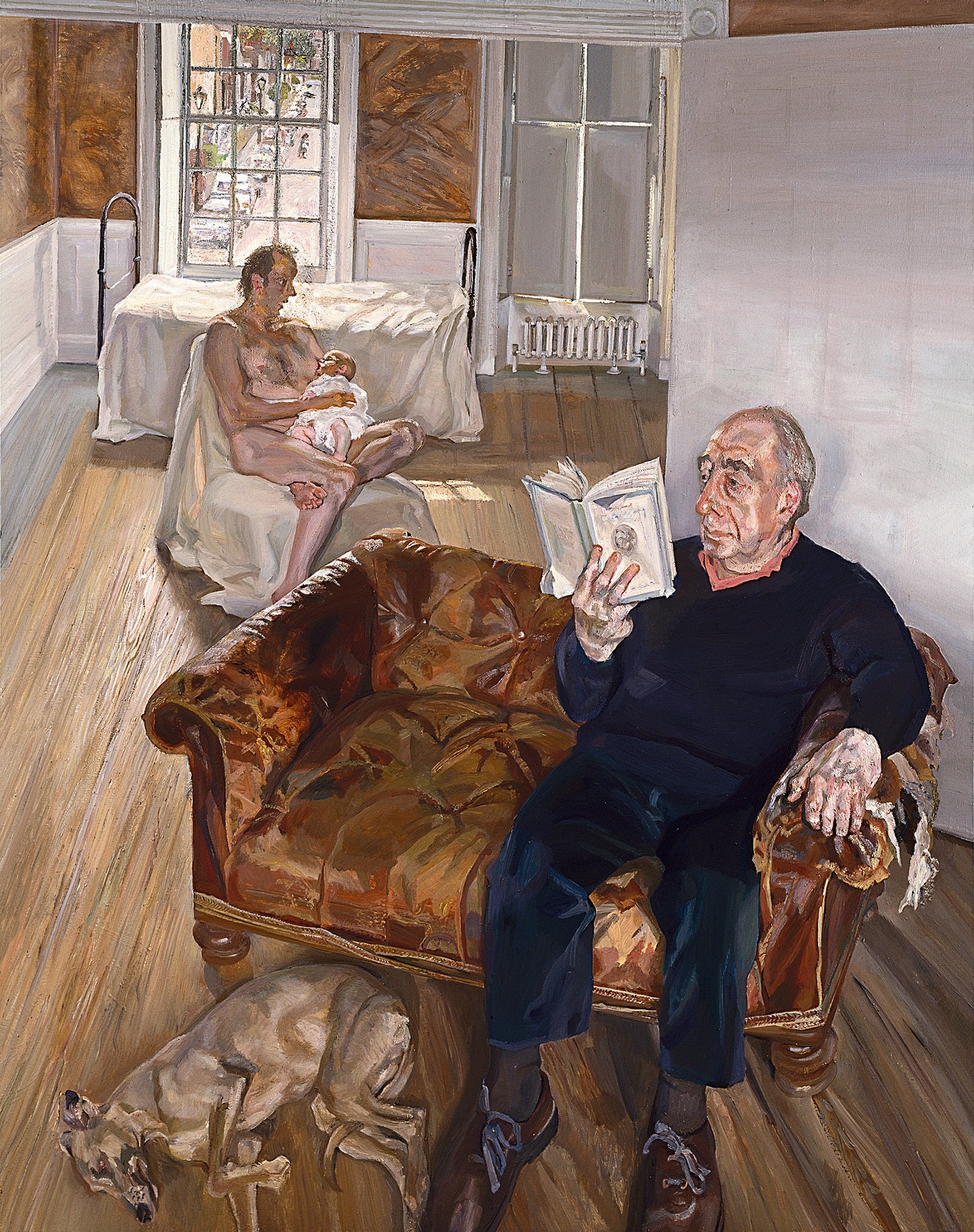 Manhattan's Acquavella Galleries is showing a group of the artist's monumental works that have never been seen together.