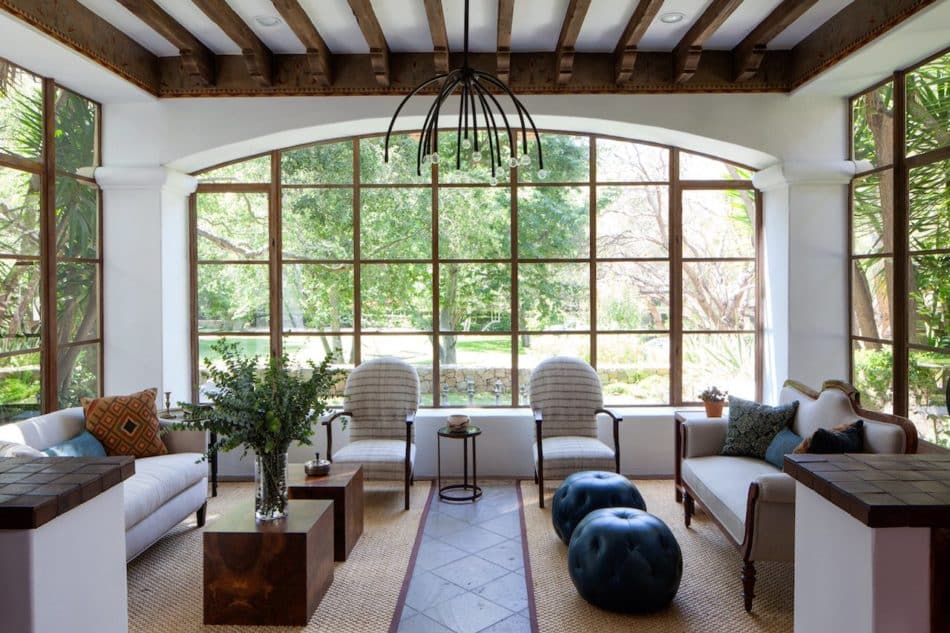 Amid exposed beams and expansive windows, this Malibu sunroom designed by Sarah Shetter is relaxed Mediterranean style summed up. “It’s a large space so we wanted two cozier seating areas that could work for a large or small groups,” says Shetter, who created mirroring arrangements with neutral furnishings: a linen settee and clean-lined sofa, walnut cubes from Lawson-Fenning and tufted-leather ottomans, matching armchairs and jute rugs. “We kept the furniture soft so the focus could be on the natural setting.” Photo by Roger Davies 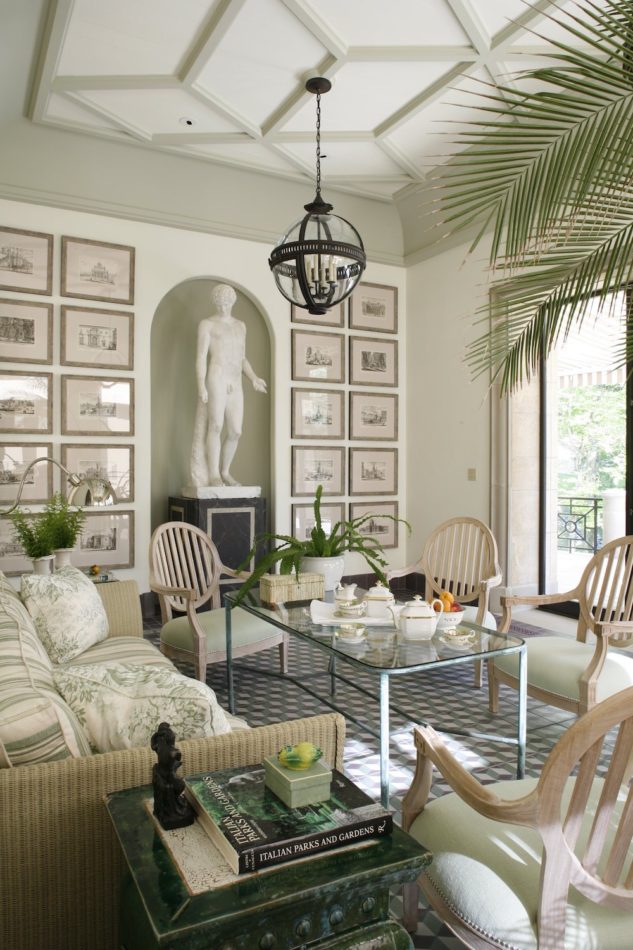 Neoclassical grandeur meets modern ease in this Hudson Valley garden room designed by White Webb. A set of 18th-century engravings, a 19th-century sculpture, and a Paul Ferrante lantern appear lavish yet laid-back against a backdrop of cool greens and grays. “The mood we wanted was one of harmony and calm,” says cofounder Matthew White of the palette, which evokes a serene Mediterranean villa. “We love that this room could be from the 18th, 19th or 20th centuries. It’s simply timeless.” Photo by Art Gray 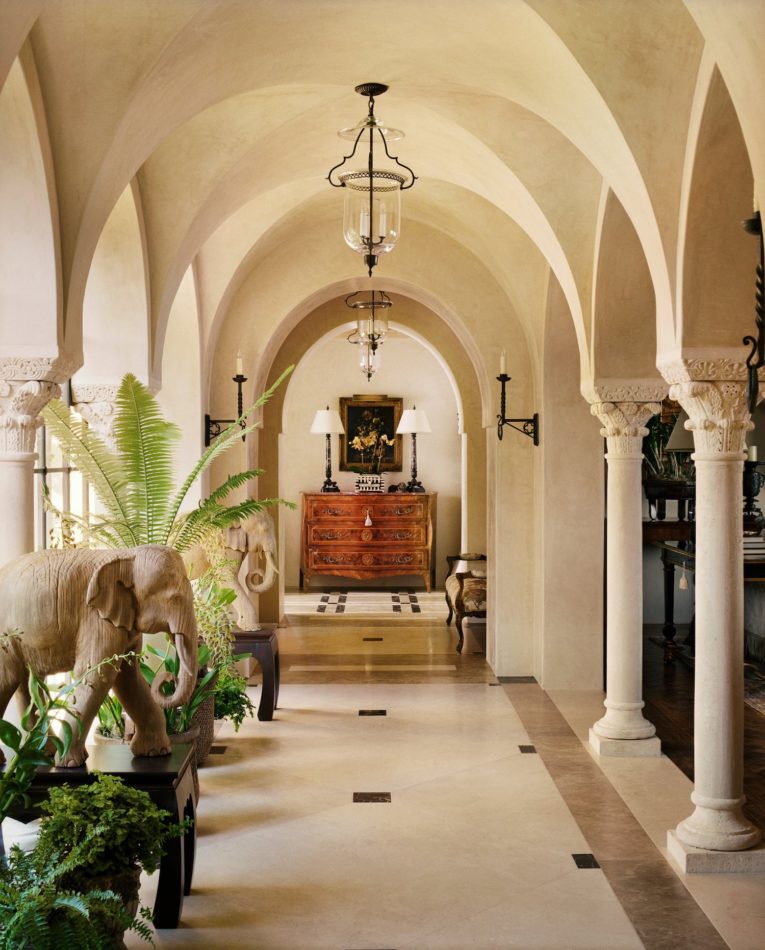 Inside an Italianate stone and stucco villa in California, Suzanne Tucker carved out this groin-vaulted gallery that beautifully reiterates the colonnaded architecture on the exterior. “The goal was to build a timeless residence inspired by Italy’s hilltop towns and monasteries,” Tucker says. “This space was curated to showcase unique artifacts the homeowners brought back from trips around the world, all within the Italian architectural framework.” Those artifacts include a pair of time-weathered elephant sculptures from Thailand and an olivewood 18th-century commode. Photo by Lisa Romerein 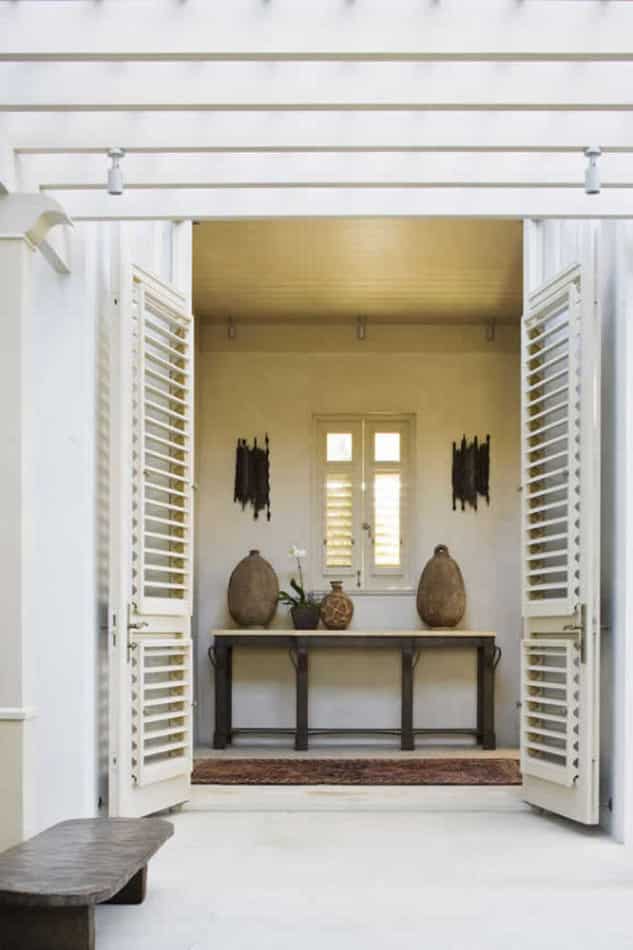 Thomas Hamel created this breezy indoor-outdoor room — complete with jalousie shutters — to act as an informal entrance to the home, a seaside escape in Florida composed of interconnected pavilions. “We wanted the home to feel tropical and casually cool yet have global appeal,” says Hamel. To accomplish this, he anchored the space with an iron and stone console table, accompanied by an African bench, mud pots and vases and an antique Afghan rug “to balance the strong architectural details.” Photo courtesy of Thomas Hamel & Associates 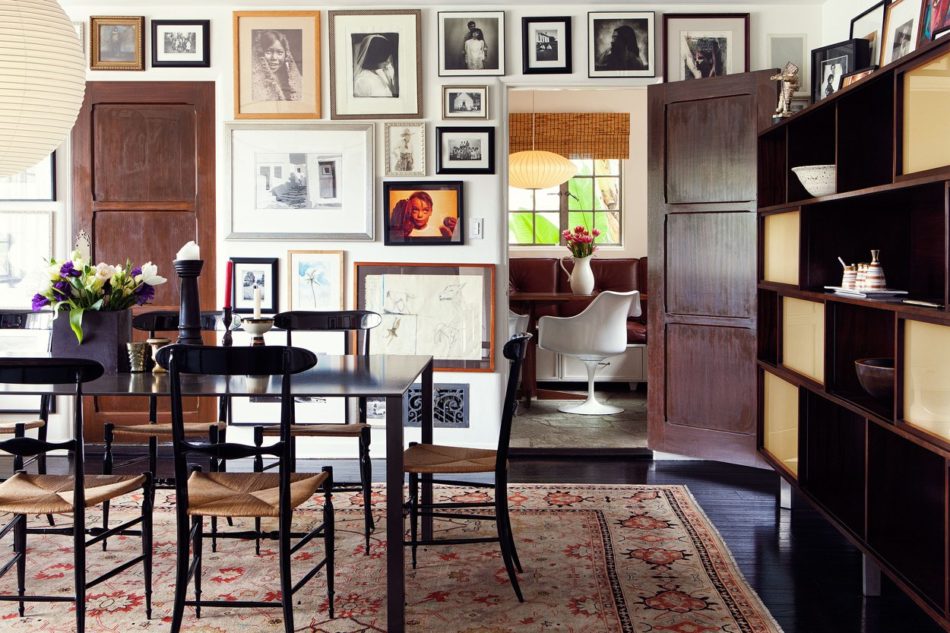 With the update of a 1932 California Spanish Deco house, originally built by Lyle Nelson Barcume, Richard Petit of Los Angeles firm The Archers, says “it needed to be less impressive and more welcoming and relaxed.” Petit created an intimate dining room with pieces from his client’s immense art and design collection, which included Isamu Noguchi’s Akari light, Jean Nouvel’s Less table (custom lacquered), Chiavari chairs, and a vintage Oushak rug. The grouping, he adds, “feels accidental and adds to the impression of mere happenstance.” Photo courtesy of Richard Petit 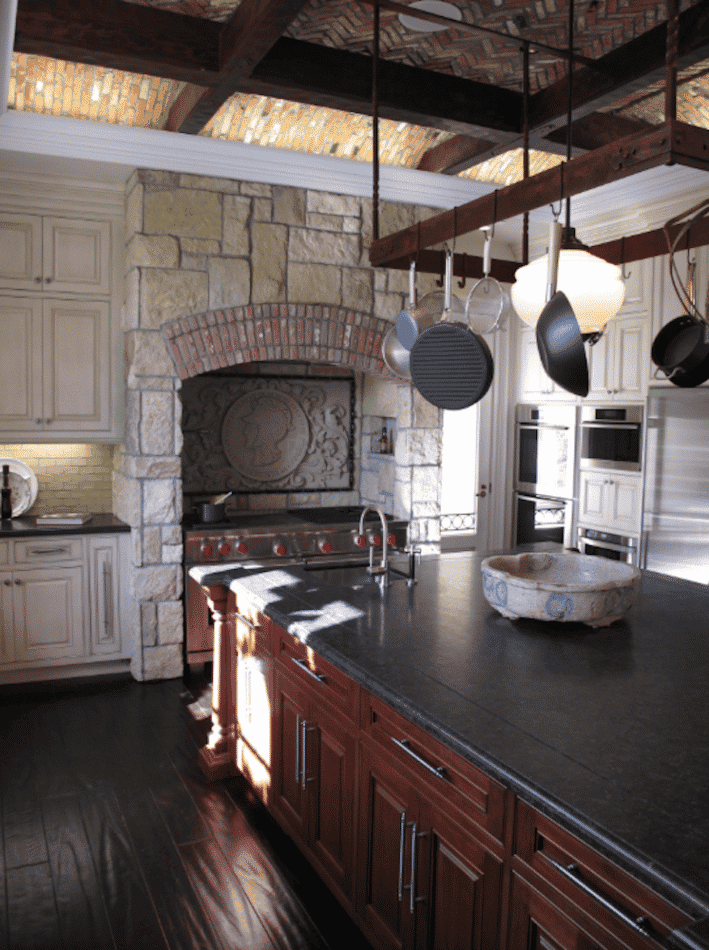 For a new Beverly Hills estate, Stephen Stone says he “wanted to create a rustic Mediterranean kitchen to look as though it had been built in a previous era.” Design elements like Belgian brick, hand-plastered walls, split-faced limestone and antique etched windows were incorporated to “achieve an overall old-world effect,” he says. The pièce de résistance? “An antique carved-stone tablet was used over the oven back as a focal point in the space.” Photo courtesy of Stephen Stone 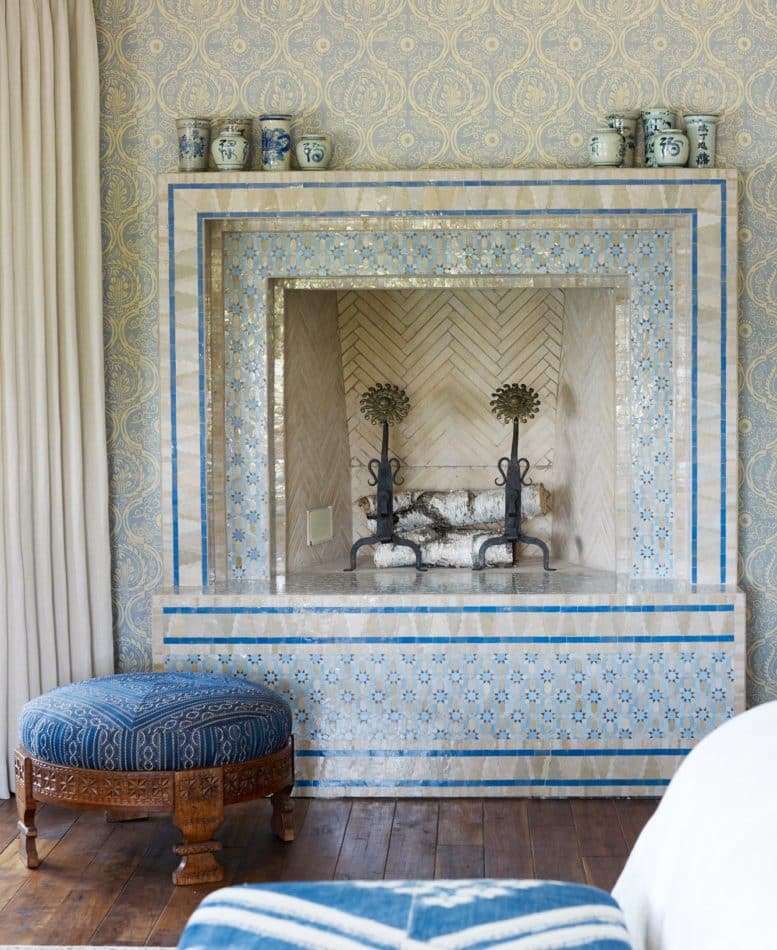 For a vacation home in Michigan, Martin Horner, cofounder of Soucie Horner, used shades of blue as a nod to the waterside location — and took a soft approach in the bedroom. “We wanted this room to be worldly in a quiet way. Plenty of pattern in not-quite-matching blues adds to the collected feel,” he says. “The homeowners have eclectic tastes and are open to all periods and provenances. So we mixed everything, from Moroccan-inspired fireplace tiles to an antique footstool.” Photo by Francesco Lagnese 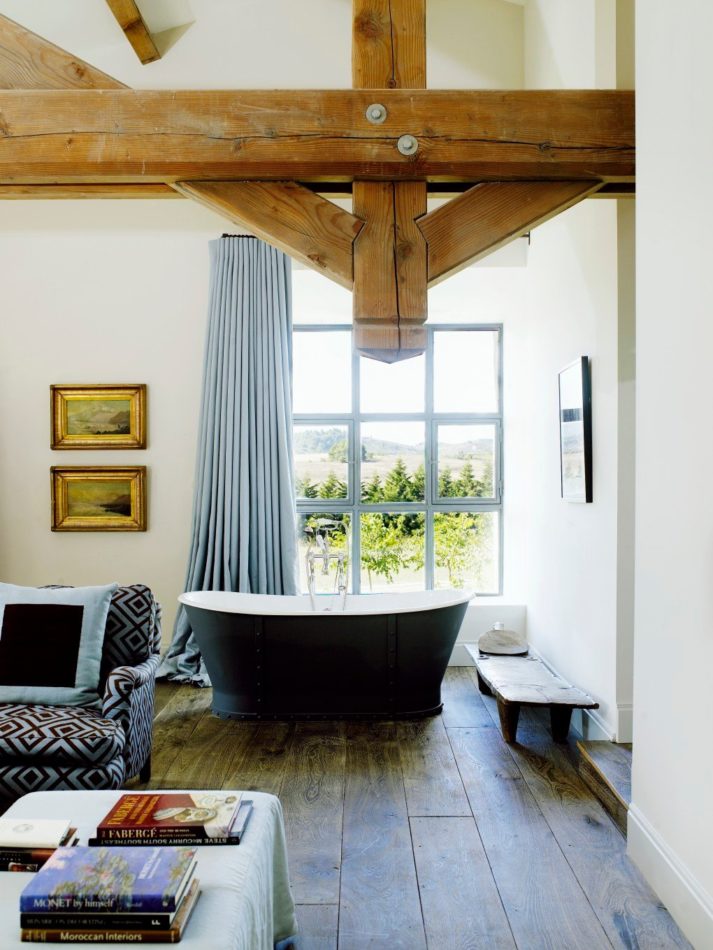 Ensconced within a former wine-storage barn in the southwest of France, this master bedroom designed by Samantha Todhunter comes with an open-concept bath that has 180-degree views of the Corbières wine region. “The surroundings were key so it was important to create internal spaces that worked comfortably with the outside,” says Todhunter. To further play up the focus on the exterior scenery, she kept to a classic color palette of chocolate and powder blue. Photo by Oliver Clarke 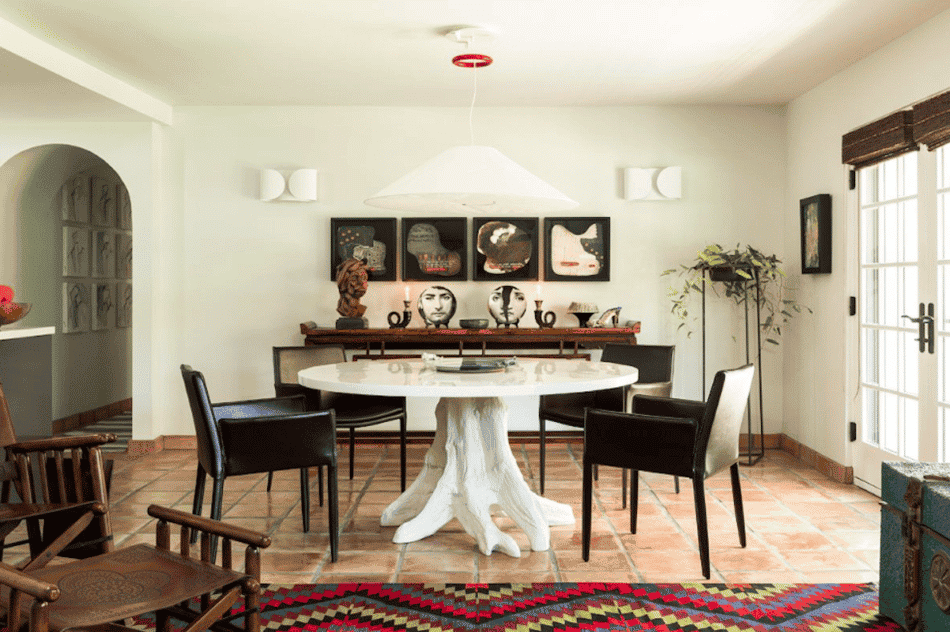 In his design for a 1930s Spanish Colonial in Palm Springs, Sam Cardella, who is known for his daring spaces, created a casual dining area within the large open living room that sets it apart from the rest of the home. Cardella’s genius is in the eclectic mix. Here, that means pairing a tree-trunk pedestal table with streamlined leather chairs, and accompanying it all with an intriguing display of art and objects that includes Fornasetti plates. Photo by David Glomb & Lance Gerber 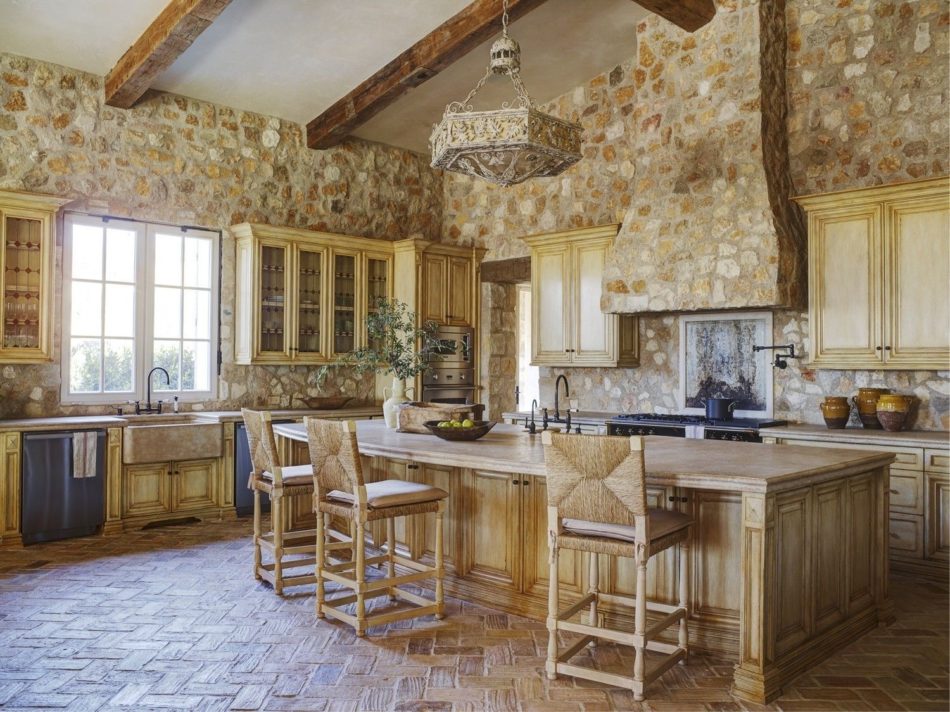 Blending California comfort with Provençal rusticity, designer Ohara Davies-Gaetano dreamed up this kitchen to serve as a warm and inviting gathering spot in a family home. “Our clients truly wanted their home to feel like an old bastide in the South of France, so our focus was to use authentic materials that conjured up that vibe,” says Davies-Gaetano, referring to cobblestone walls, rush-seat bar stools and ornate lantern, which lend the space French Country charm. Photograph by Richard Powers 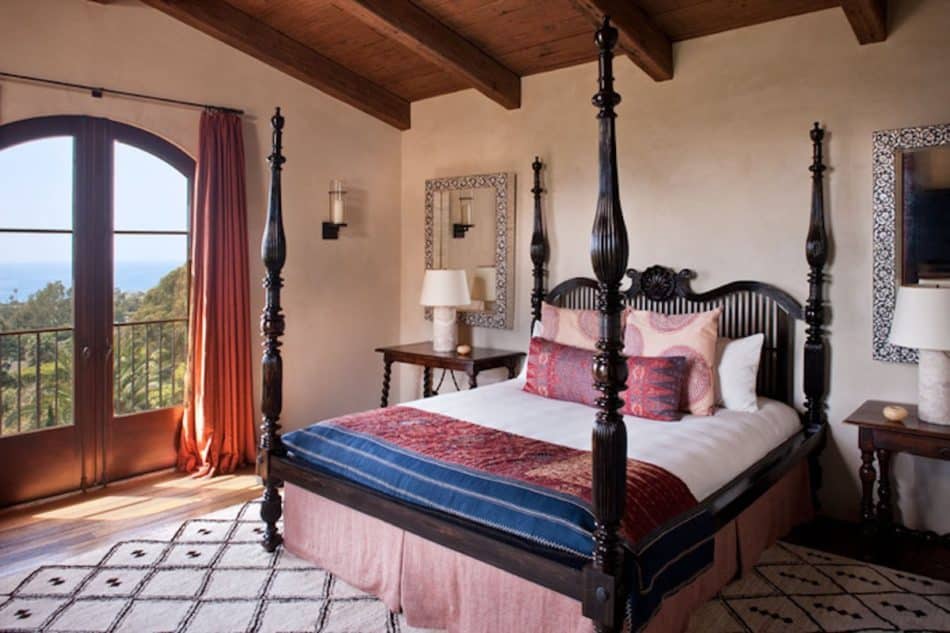 Measured symmetry rules in this Laguna Beach, California, bedroom, where designer Michael S. Smith left his signature refined-classic touch. He brought in an ornate four-post bed, which exudes old-world elegance that beautifully complements the Spanish Colonial framework of the home. Meanwhile, the pairs of bedside tables, lamps and inlaid mirrors soften the room’s traditional formality. It’s a fine balance that makes the room feel both polished and welcoming. Photo by Scott Frances 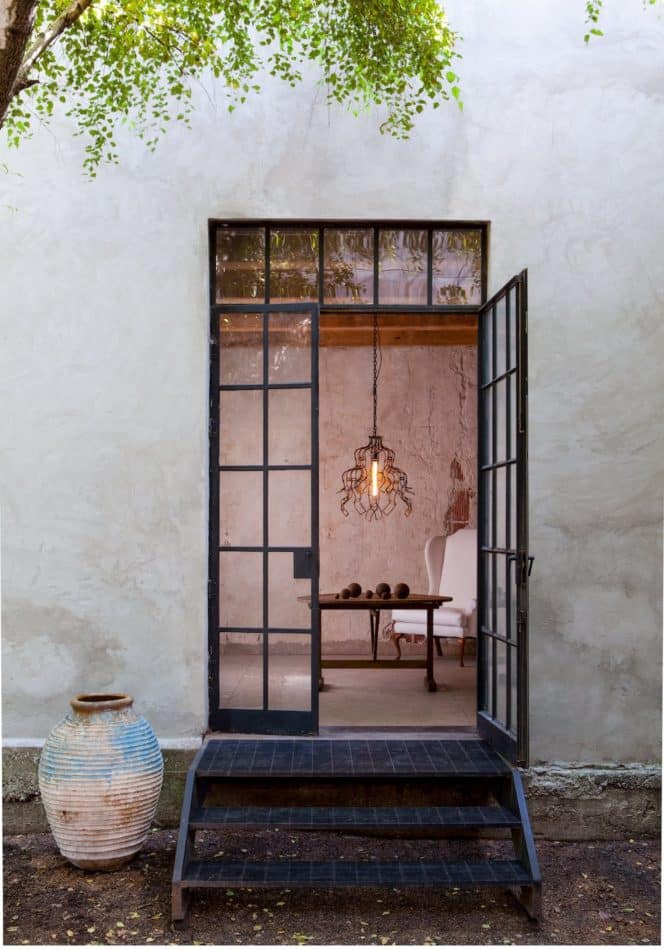 While transforming a former charcoal factory in Chicago into a family home, Michael Del Piero maintained the building’s timeworn vibe in this sunroom, opting for crusty walls and antique wood flooring that set “a relaxed, European ambience,” she says. “We kept the furnishings simple and timeless as if they could have always been there.” Those include a Lucy Slivinski light sculpture and a French table from Architectural Artifacts, which Del Piero found on 1stdibs along with the antique oil jar. Photo by Janet Mesic Mackie 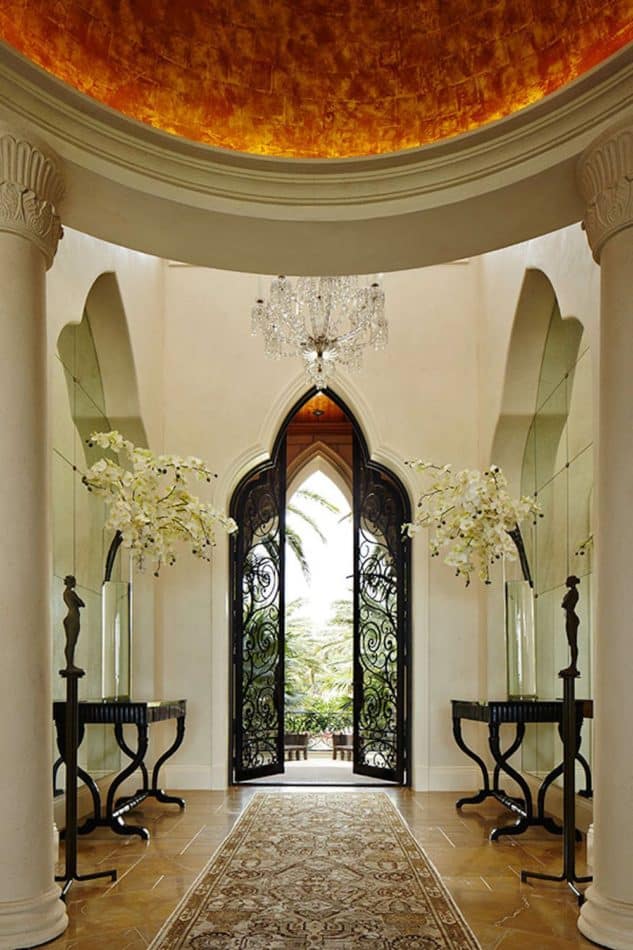 Romance and formality command this Moorish foyer of a Manalapan estate, where a Baccarat chandelier presides over a pair of 19th-century Italian consoles topped with pedestaled sculptures by the late California artist Robert Graham. “Following Eastern tradition, intimate spaces are often secreted behind elaborate gates,” says designer Linda Ruderman, noting that the home’s prominent Mediterranean Revival elements, courtesy of Addison Mizner, made it easy to layer and elaborate on the design. The rug is by Mansour. Photo by Tim Williams 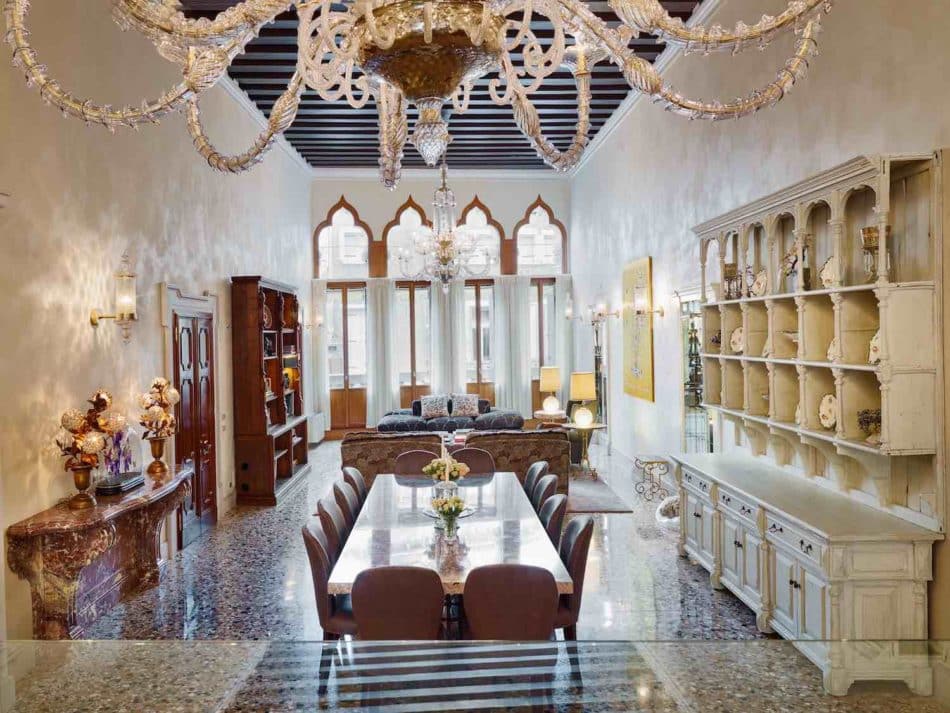 “Refined Venetian decadence without overembellishing” is how designer Ed Godrich describes this opulent salon within a palazzo in Venice, Italy. “Luckily, we had amazing volume on our side, so we were able to source some very special large-scale pieces,” Godrich adds, referring to the massive Seguso chandelier, scagliola dining table, and sumptuous George Smith seating. Photo courtesy of Godrich Interiors 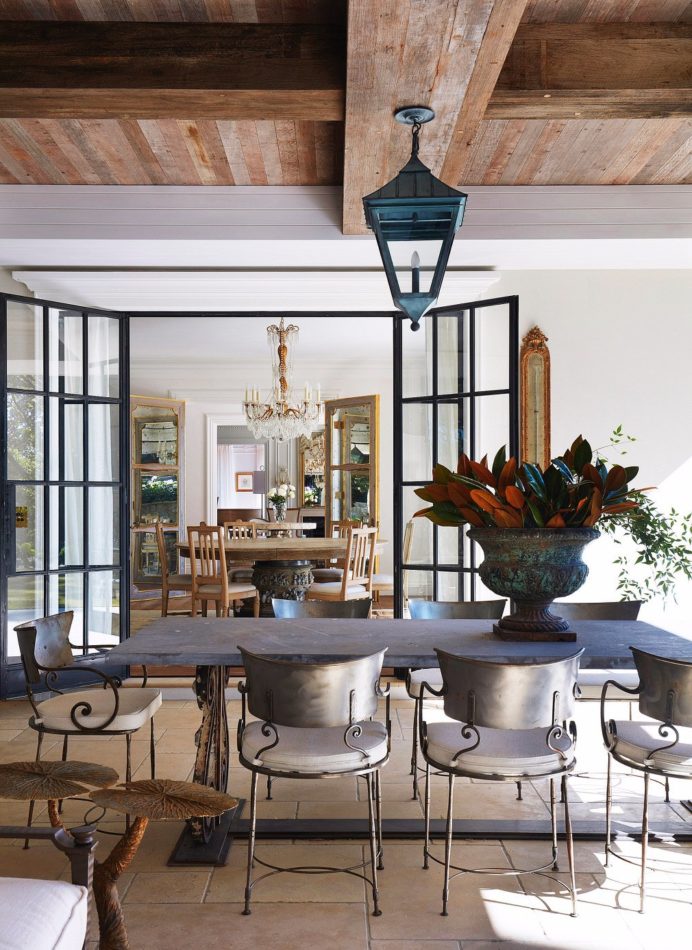 “We wanted to achieve a European feel while also employing a unique Aussie sense of cosmopolitan casual, so we emulated a provincial terrace with a slightly urban edge,” says Dylan Farrell of this rustic yet tailored veranda in a Sydney home. To create a seamless transition between indoor and outdoor living, he layered furnishings with Italian influences throughout, ranging from an industrial lantern to polished-steel chairs from Parc Monceau Antiques to a neoclassical gilt-metal chandelier. Photo by Prue Ruscoe