Explore the Festival of Lights through ‘The Art of Hanukkah’ 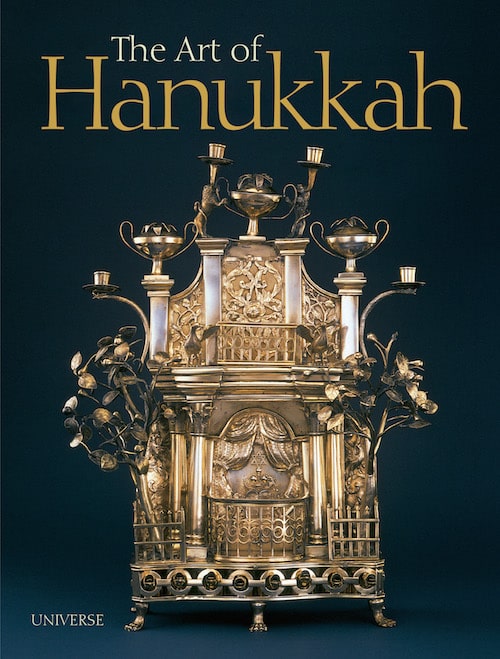 The Jewish festival of Hanukkah celebrates a miracle — the victory of the Jews over the Syrian-Greek army in 165 B.C. and the rededication of the ancient Temple in Jerusalem — and a new book examines the art inspired by that miracle and the customs of its celebration.

The Art of Hanukkah (Universe) traces the meaning and spirit of the week-long Festival of Lights through 48 masterpieces of ceremonial and fine art, from illuminated manuscripts to contemporary paintings, with a special focus on Hanukkah lamps (also known as menorahs or Hanukkiot) spanning continents, eras and materials.

“Evolving in parallel with the customs of the holiday, the art objects associated with Hanukkah are an illuminating microcosm of the long history of Jewish art,” notes author Nancy M. Berman, former director and curator of the Hebrew Union College’s Skirball Museum, in Cincinnati. Eight such works offer a glimpse into that rich context and the changing interpretations of the Hanukkah phenomenon. 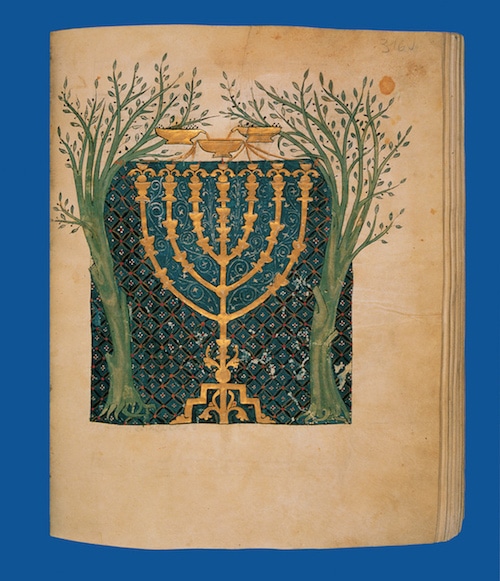 In a page of this early Hebrew illuminated manuscript from Spain’s Castilian region, artist Joseph ha-Zarefiti (Joseph the Frenchman) depicts the vision of Zechariah. “In a dream, the prophet saw a gold seven-branched candelabra flanked by two olive trees, which supplied oil through bowls and pipes to the menorah,”Berman writes. 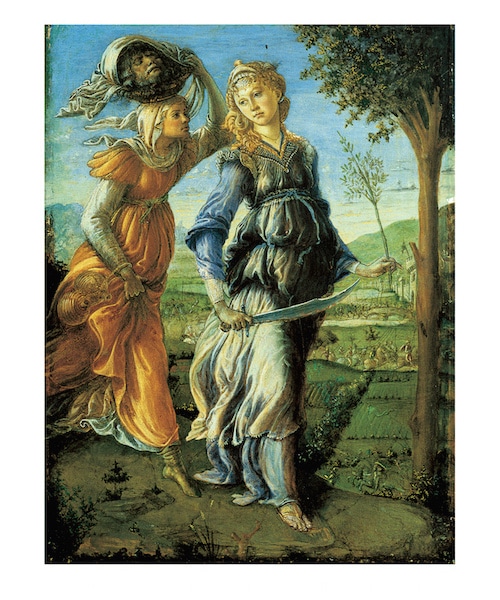 From the collection of the Uffizi Gallery, in Florence, this small but exquisite panel is one of two that Botticelli devoted to the story of Judith, a Jewish woman who decapitated the Assyrian general besieging her town of Bethulia. It is taken from the apocryphal book that has been associated with Hanukkah since medieval times, but Botticelli came upon it as a way to satisfy his Medici patron’s desire to glorify and contextualize the triumphs of Florence. 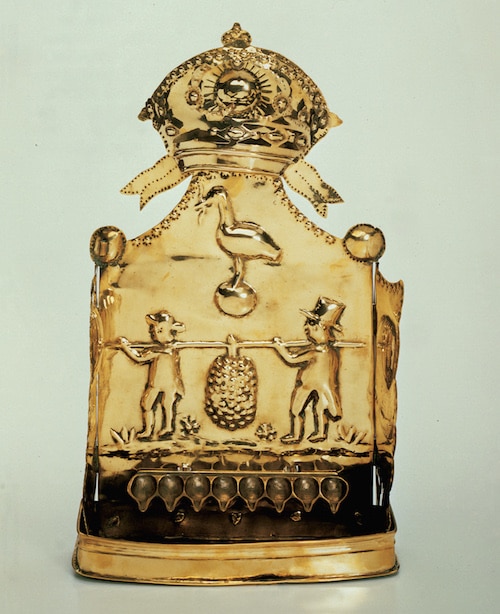 For Berman, the Hanukkah lamp has always been “the Jewish ceremonial art object that asked the right questions — the questions that stimulated a deeper understanding of the Jewish experience through the art and artifact treasures of the collective Jewish past and present.” This bench-type version, made of brass sheet metal, adapts the single-candle standard of Dutch secular folk-art brass lamps with eight cast fonts, one for each candle. 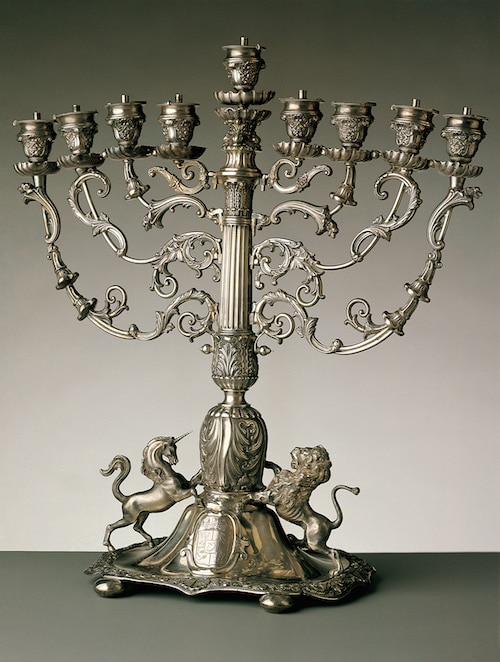 A rare Jewish ceremonial art object with a history that can be traced for more than a hundred years (the Frankfurt History Museum looked after it during World War II), this neoclassical lamp is studded with Rothschild family symbols. The cast-silver unicorn and lion that flank the engraved crest represent the British branch of the royal clan. 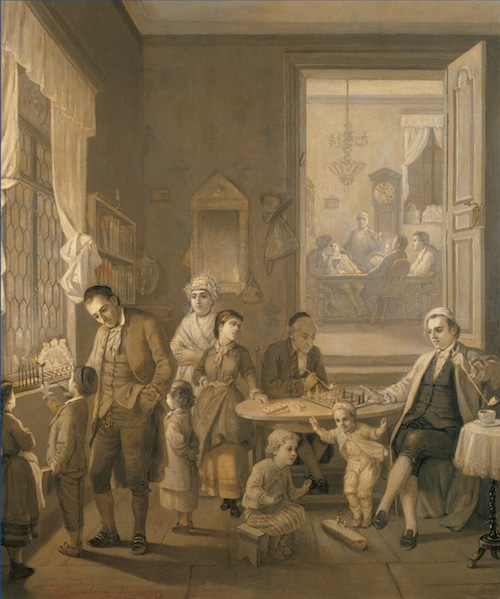 The Kindling of Hanukkah Lights, 1880, by Moritz Daniel Oppenheim

A well-known German painter of biblical and genre scenes, Oppenheim created this grisaille as part of a series of oil paintings of Jewish family life — made at a time when many of his peers were converting to Christianity to improve their station in German society. “The tender nostalgia of the Hanukkah celebration in this work suggests the artist’s childhood memories as well as his lifelong conviction of the value of Jewish family religious experience,” Berman notes. 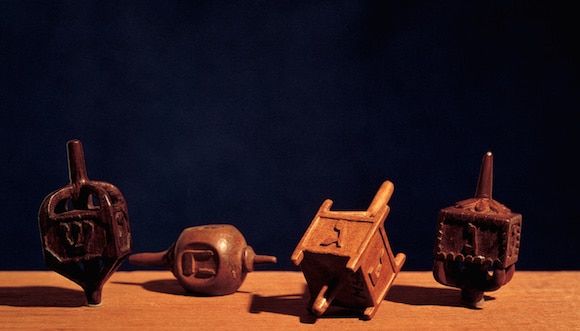 From the collection of the Jewish Museum in New York, these hand-carved dreidels are believed to be from Germany or Poland. The game of dreidel (from the German dreihen, meaning to spin or turn) is a joyous celebration of the Hanukkah miracle. The dreidel’s four sides are etched with “the Hebrew letters that begin each of the four words of the phrase nes gadol haya sham,” explains Berman, “referring to the single day’s quantity of oil found in the Temple, which, legend says, miraculously lasted for eight nights.” 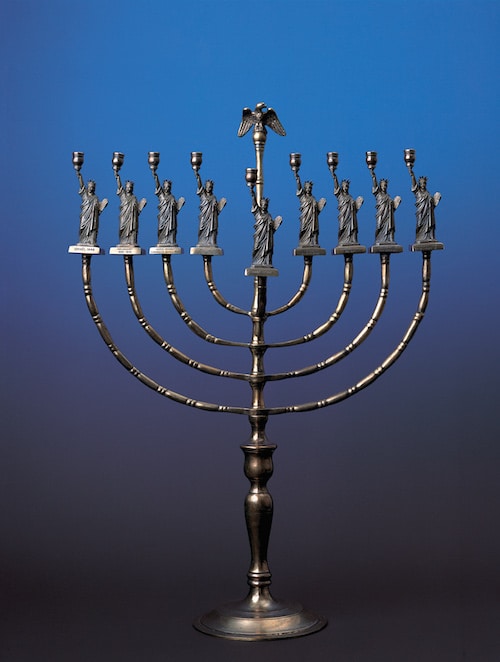 A native of Germany who escaped the Nazi regime by immigrating to Australia and later to the United States, Anson drew upon his hobbies of collecting Judaica and American memorabilia to create this brass Lady Liberty menorah. He used a souvenir figurine to cast the lamp’s nine statuettes, transforming their torches into candleholders, and placed an eagle at the top. An important event in Jewish history is engraved on the base of each Lady Liberty statuette. 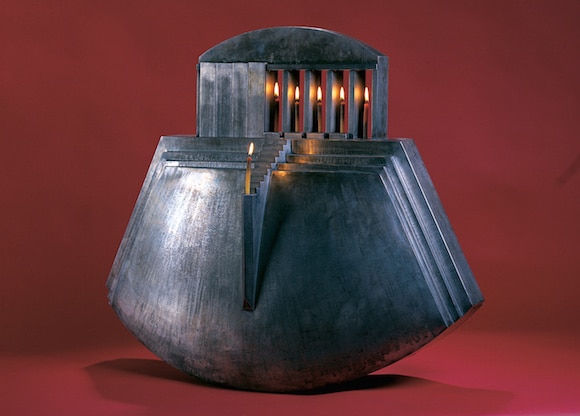 “This large and massive menorah is intended to be permanently displayed as both a historical symbol and an evocative sculpture,” according to the California-based sculptor. More than two-feet wide and nearly three-feet tall, the silver-plated steel form takes the form of a fortified Temple, with the spaces for candles designed to be concealed behind shutters for the rest of the year. As Berman interprets it, “The distilled spiritual presence of this Hanukkah lamp possesses a dignity of honor and hope for the continued struggle for freedom.”