H 35 in. W 26 in. D 26 in.
Unique Art Deco Chandelier, Czechoslovakia, 1930
Located in Praha, CZ
The item made of brass, and green glass. Made from one hotel in Prague. Measures: Diameter of shades is 12 cm. Original, functional condition.
Category

H 26.38 in. W 20.48 in. D 4.73 in.
Pair of Sconces "Reticello" by Seguso, Murano, 1940
By Seguso Vetri d'Arte
Located in Rome, IT
Fabulous pair of wall lights with a precious Murano glass Reticello balls. Provenance from a historic luxurious Italian hotel.
Category 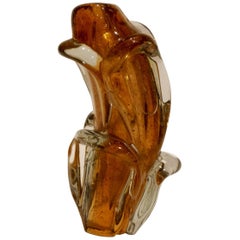 H 6.7 in. Dm 6.7 in.
TOTEM Lamp in Cream Shagreen and Bronze-Patina Brass by Kifu Paris
By Kifu Augousti
Located in New York, NY
The TOTEM Lamp in cream shagreen is a playful piece with it's rotating parts. These modern TOTEM-inspired parts that concave, have subtle bronze-patina brass details that frame each ...
Category

H 30 in. Dm 21 in.
Large Art Deco Chrome Chandelier
Located in Vienna, AT
Brass frame chrome-plated with green (or yellow/beige) shades and fitted with E27 sockets, made by Napako in the Czech Republic in the 1930s.
Category

H 3 in. W 3 in. D 3 in.
Art Deco Iron-Framed Mirror with Grape and Leaf Detailing
Located in New York, NY
An original Art Deco mirror surrounded by a worked iron frame. The frame above the mirror is decorated with a grape vine with grapes and leaves. Good condition with age appropriate p...
Category

H 10.63 in. W 8.27 in. D 5.91 in.
French Art Deco Hand Blown Crystal and Brass Scroll Form Design Epergne
Located in New York, NY
This stunning French Art Deco epergne (typically displayed on a dining table or buffet) was realized in France, circa 1930. It consists of a brass frame with neoclassical detailing a...
Category

H 32.29 in. Dm 17.33 in.
Lalique Masque De Femme Votive on Stand Clear Crystal
By René Lalique, Lalique
Located in New York, NY
Inspired by the famous Masque de Femme design originally produced as a panel for a fountain, this candleholder combines the purity of crystal, simplicity of line, and richness of det...
Category

How Much is a Art Deco Hall?