Bespoke lighting is a hallmark of upscale interiors, and contemporary makers are increasingly ambitious in their materials and forms.
by Jill Krasny
Pin
Share
Tweet
Email

For those looking to pep up a particular room, customizable contemporary lighting is a fuss-free way to introduce a fresh look.

Mesmerized by the sculptural, floating glass works of Roll & Hill? You can make a big impression with the brand’s Art Deco–inspired Cora 8 lights, choosing your own size, shape, color, material and even texture.

“My inspiration comes from my dreams,” says Beau & Bien partner Sylvie Maréchal, whose Le Merveilleux chandelier is a cutting-edge take on an old Maison Delisle fixture.

“When you look at Le Merveilleux,” says the Paris-based designer, “you see the original shape.” But its metal armature has been replaced by LED lights in the form of candles and dangling spheres suspended by golden steel wires.

“I’ve been called a hoarder for never throwing things away,” says Roll & Hill designer Karl Zahn. “But I actually find a lot of inspiration in tiny trimmings and offcuts.” In the case of his Cora 8 light, it was a neighboring stonecutter’s scrap bits that served as muse.

“I broke a piece in half, and the jagged, raw edge was really interesting,” says Zahn, who credits a stack of cinder blocks “catching the light” with helping him nail down the final form. He then experimented with polishing, brushing and painting, cycling through many materials on his path to perfection.

Like all the custom pieces produced by Brooklyn’s Ladies & Gentlemen Studio, the Float pendant is intended “to interact with its surroundings and those using it,” says firm cofounder Dylan Davis, who describes the pendant as “a simple brass armature supporting an oval sheet of matte-finished aluminum.”

The concept for the piece grew out of the designers’ fascination with the way various components react to gravity and light. “We asked ourselves how this effect can translate into the needs of a space,” says Davis. “Chandeliers have a dual function of lighting a space and also defining it.” The result looks like a pared-down homage to Alexander Calder’s sculptural mobiles — but with the Float pendant, every element has a function.

The Finnish sculptor Teemu Salonen, who hails from the small municipality of Padasjoki, begins every project with a series of sketches. Then he grabs a hunk of clay and gets busy. “I don’t use a computer” or any molds, he says.

Each medium-size handmade ceramic lamp takes up to 200 hours to shape, plus ample time for curing and firing, which produce what Salonen describes as “lively” effects. Several layers of opaque full-matte paint give his creations their otherworldly look.

“We chose to mix raffia, leather, marble and brass,” says Masquespacio cofounder and designer Ana Hernández, “creating a design inspired by the Mediterranean light, postmodernism and the materials themselves.” 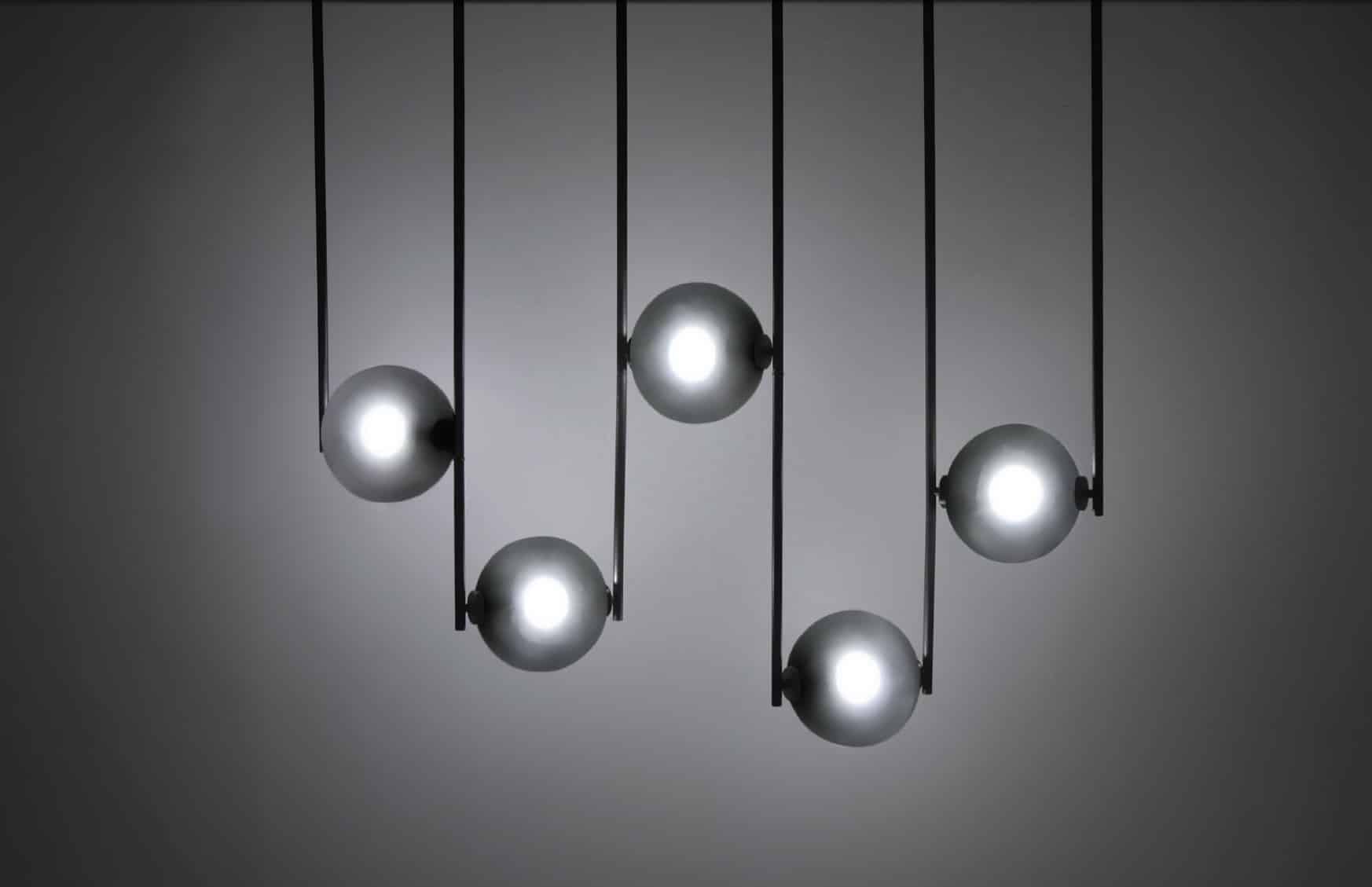