H 61 in. W 36 in. D 12 in.
Restored White Painted Midcentury Rattan Side Table Bookshelf
Located in Van Nuys, CA
White painted midcentury era rattan side table bookshelf featuring two shelves with skeleton side walls and a swivel base for easy book location. Restored to new for you. All rattan,...
Category 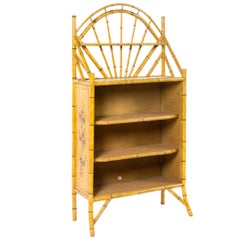 H 30.5 in. W 6.25 in. D 11.75 in.
19th Century French Wooden Bookshelf with White Patina
Located in Vulpellac, Girona
19th century french cupboard with a nice white patina. It comprises lot of space for books or just keeping. There is central lower cupboard with two wooden doors which are left ...
Category

H 98.04 in. W 97.25 in. D 19.69 in.
M. Matégot Rigitule, Glass Bookshelf Jardinière Library, Wall Mounted Sculpture
By Mathieu Matégot
Located in London, GB
Matégot is perhaps the last and most important metalsmith of the French after war era. Had incredible originality in his design. Always very poetic in his realization. Time to coll...
Category

H 40 in. W 42 in. D 12 in.
Contemporary Painted Metal Bookshelf
Located in North Miami, FL
Four tier metal bookshelf with oblisk top, painted in a leopard finish. Glass shelves are beveled and there is a design on the backside of this bookshelf.
Category

H 89.5 in. W 49 in. D 19.25 in.
English Painted Fish Decoupage Bookshelf
Located in Baton Rouge, LA
English 1890's bamboo bookshelf with adjustable shelves is sturdy and re-finished with black paint overlaid with decoupage of fish and an interesting boarder with sea grass shelves a...
Category

H 44.75 in. W 41.5 in. D 13.38 in.
Painted Dorothy Draper Bookshelf Secretary
Located in Chicago, IL
This impressive cabinet was designed by Dorothy Draper for Henredon. It features a Dutch-style bombe base with three drawers, splayed feet, and intricately chased brass drop pulls.<b...
Category

H 89.5 in. W 49 in. D 19.25 in.
Pine Painted Utility Shelf or Bookshelf
Located in Baltimore, MD
This Primitive utility shelf unit has been used for storing heavy vessels and some of them have left their marks on the shelves of this pretty piece. Three shelves are pegged into th...
Category

H 60 in. W 34 in. D 11 in.
George lll Style Yellow-Painted Wood Bookshelf
Located in Hudson, NY
George III-style yellow painted wood bookshelf. Three ample shelves over a drawer at the bottom. Some scratches on the top shelf, negligible and unseen with books or bibelots. Grey ...
Category

H 61.5 in. W 27 in. D 19 in.
Large Gray Painted Romanian Wall Unit Bookshelf, Antique Look
Located in Round Top, TX
This large wall unit is a reproduction of the style of shelving units called "grocers desks" in late 19th century Europe. It is built in 2 units, the upper shelves and 12 drawers (de...
Category

H 95.75 in. W 98.75 in. D 20 in.
Antique Painted Bookcase, European, Scandinavian, Bookshelf, circa 1900
Located in Hele, Devon, GB
This is an antique painted bookcase, a European, possibly Scandinavian, Provincial book shelf with an equine theme dating to circa 1900. Substantially crafted in hardwood Traditi...
Category

H 94.25 in. W 46 in. D 19.5 in.
Antique Original Painted Green Bookshelf with Many Drawers, circa 1880
Located in Round Top, TX
This unique shelf unit can be used as a bookshelf or wall unit. It originally served as a display for a shop owner in 1800's Europe. The original green paint, bun feet and porcelain ...
Category

Antique Original Painted Green Bookshelf with Many Drawers, circa 1880

H 69 in. W 72 in. D 17.75 in.
Single Large British Colonial Painted Wood Bookshelf with Little Lower Drawers
Located in Atlanta, GA
A large British Colonial bookshelf or cabinet with multiple shelves and six smaller drawers in the lower part. Fluted columns give an interesting rhythm to this piece. The general co...
Category

H 42.5 in. W 95.75 in. D 19.75 in.
18th Century Italian Painted Wood Bookshelf with Egg and Dart Molding
Located in Atlanta, GA
A wonderful 18th century Italian painted wood cabinet with gilded egg and dart molding and floral carving. We added and custom painted the shelves, the back and the bracket feet, whi...
Category

H 47.25 in. W 74.81 in. D 19.69 in.
French Provincial Louis XV Style Bookshelf
Located in Great Barrington, MA
Rustic country Provincial style book case or book shelf with carved scalloped details will be useful in any room for books or displaying collectables. The shelving unit has been whit...
Category

H 79 in. W 38 in. D 19.5 in.
John Keal Desk with Bookshelf for Brown Saltman
By John Keal
Located in Laguna Hills, CA
Mid-Century Modernist design with floating top in two-tone black and white satin finish with three drawers in front and bookshelf on the backside. Can be used against the wall or flo...
Category

H 59 in. W 74 in. D 10 in.
Industrial Vintage Mid-Century Perforated Yellow Metal Bookshelf or Shelves
Located in Landau an der Isar, Bayern
Vintage midcentury modernist industrial style shelf in canary yellow with circular perforations. Made of a steel frame and perforated metal painted or enameled in yellow with circula...
Category

H 20.01 in. W 35.44 in. D 7.88 in.
Goldscheider Vienna Girl with Book Sitting on a Bookshelf by Dakon, circa 1935
By Stefan Dakon, Goldscheider Manufactory of Vienna
Located in Vienna, AT
Very rare goldscheider Art Deco ceramic figurine. The girl with blond curly hair and a green bow in her hair, wearing a black and white checked dress, is sitting cross-legged on a l...
Category

Goldscheider Vienna Girl with Book Sitting on a Bookshelf by Dakon, circa 1935

Painted Bookshelf For Sale on 1stDibs

How Much are Painted Bookshelf?

A painted bookshelf can differ in price owing to various characteristics — the average selling price 1stDibs is $4,700, while the lowest priced sells for $230 and the highest can go for as much as $73,857.