H 40.75 in. W 28.5 in.
Untitled, from the Basque Suite, Robert Motherwell
By Robert Motherwell
Located in New York, NY
Motherwell’s well-known ‘Basque Suite’ demonstrates his innovative and painterly approach to printmaking.  Designated as number 12 in the suite, the artwork shown here  is a stunning...
Category 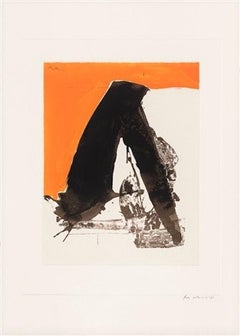 H 43.5 in. W 31.5 in. D 1.5 in.
"The Basque Suite: Untitled" Blue Limited Edition Motherwell Print
By Robert Motherwell
Located in Danvers, MA
Part of The Basque Suite series. Abstract print with shades of blue, black and white. Signed in lower right along with edition number "130/150".
Category 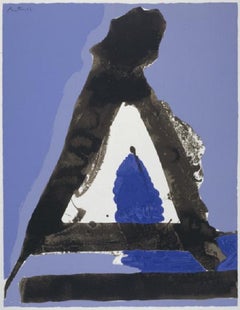 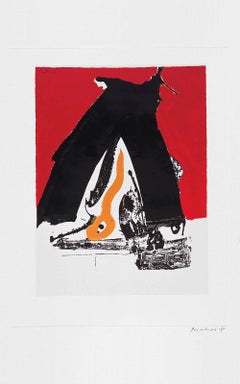 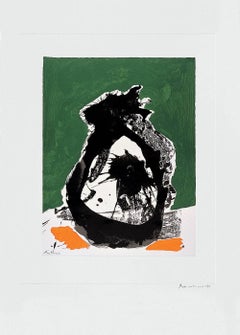 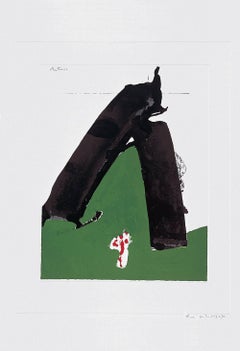 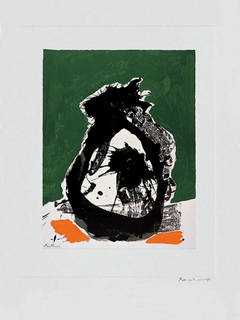 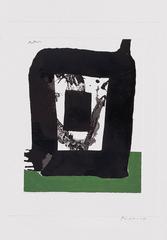 H 41 in. W 28.25 in.
Robert Motherwell "Basque Suite No. 4"
By Robert Motherwell
Located in Toronto, Ontario
Robert Motherwell (1915-1991), alongside Jackson Pollock, Mark Rothko, and Willem de Kooning, made up the quartet of abstract painters that radically defined Modern painting in Ameri...
Category

H 40.75 in. W 28.5 in.
Robert Motherwell "Basque Suite No. 4"
By Robert Motherwell
Located in Toronto, Ontario
Robert Motherwell (1915-1991), alongside Jackson Pollock, Mark Rothko, and Willem de Kooning, made up the quartet of abstract painters that radically defined Modern painting in Ameri...
Category

H 40.75 in. W 28.5 in.
The Basque Suite: Untitled 1971, Robert Motherwell
By Robert Motherwell
Located in Palm Desert, CA
Screen Print on J. B. Green paper, from the edition of 150. Numbered in pencil 122/150 lower right, signed RM and signed in plate Motherwell. Framed in an archival lucite box. Pri...
Category

H 41 in. W 28.25 in.
Untitled No. 12 (from the basque suite)
By Robert Motherwell
Located in New York, NY
Serigraph/Silkscreen Edition of 50 Signature top left
Category

You are likely to find exactly the robert motherwell basque you’re looking for on 1stDibs, as there is a broad range for sale. In our selection of items, you can find Abstract examples as well as a Contemporary version. Making the right choice when shopping for a robert motherwell basque may mean carefully reviewing examples of this item dating from different eras — you can find an early iteration of this piece from the 20th Century and a newer version made as recently as the 20th Century. When looking for the right robert motherwell basque for your space, you can search on 1stDibs by color — popular works were created in bold and neutral palettes with elements of gray, beige, orange and green. Finding an appealing robert motherwell basque — no matter the origin — is easy, but Robert Motherwell each produced popular versions that are worth a look. Artworks like these of any era or style can make for thoughtful decor in any space, but a selection from our variety of those made in screen print and lithograph can add an especially memorable touch.

How Much is a Robert Motherwell Basque?

The average selling price for a robert motherwell basque we offer is $7,700, while they’re typically $4,500 on the low end and $9,800 for the highest priced.

The name of painter, printmaker and writer Robert Motherwell is often taken as synonymous with the New York School, whose name he coined. Motherwell was the youngest of this group of Abstract Expressionists working in art, dance, poetry and music in 1950s and '60s New York City, which included Jackson Pollock, Willem de Kooning, Philip Guston and Mark Rothko.

Works like the 1967 Beside the Sea no. 45 , an acrylic on canvas, and the 1966 lithograph New York International epitomize Motherwell’s use of simple shapes in boldly contrasting colors, executed in quick, gestural strokes that occasionally evoke figures, suggesting a latent narrative despite their obvious abstraction.