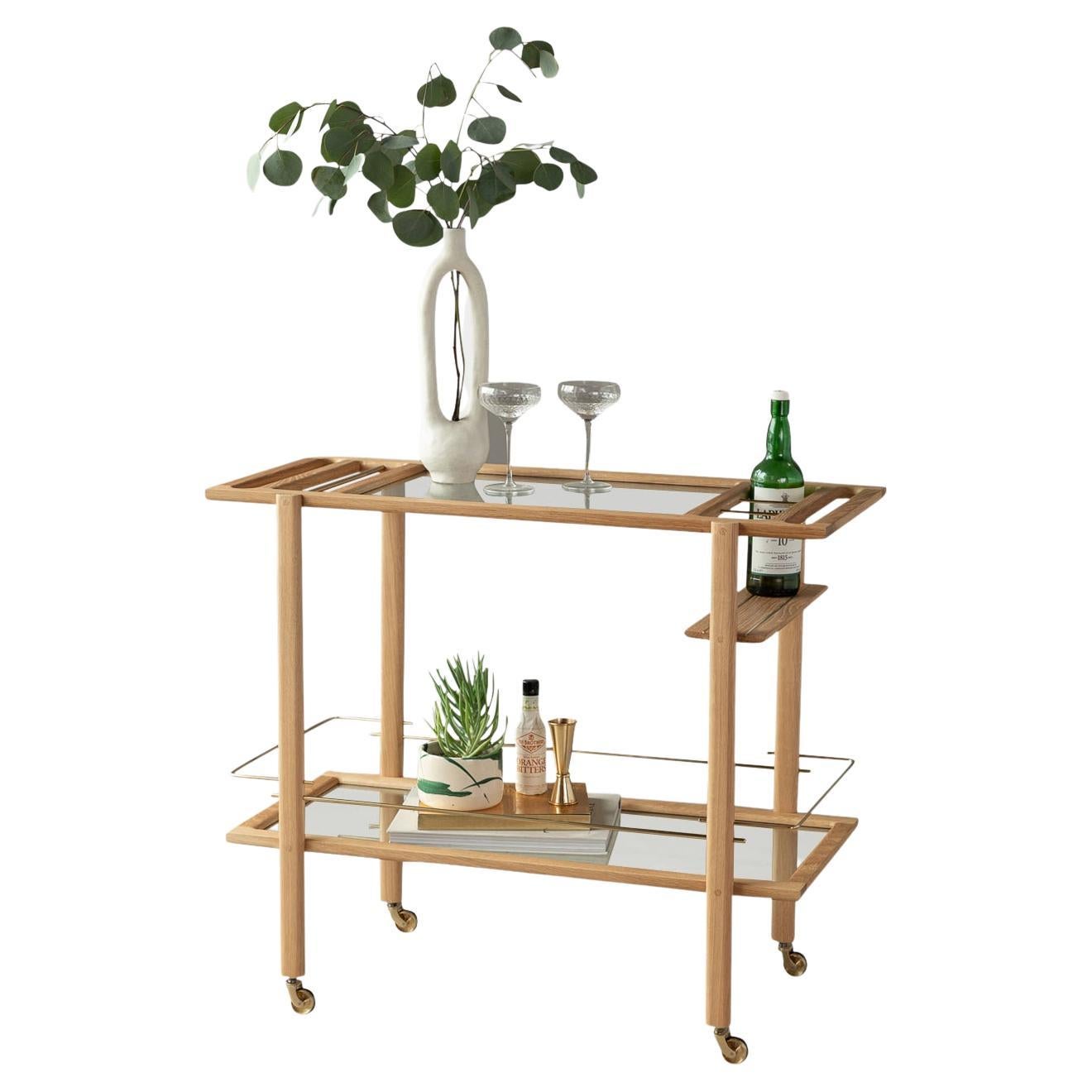 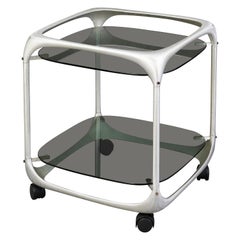 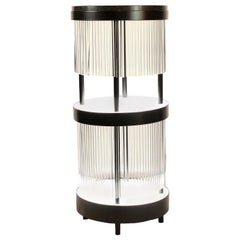 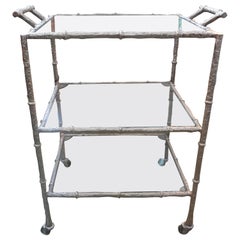 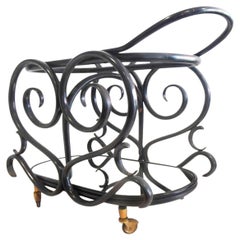 Blackened Steel, Cast-Concrete and Solid Walnut Wood Handsome Bar Cart
By Stefan Rurak
Located in Biddeford, ME
This bar cart is composed of a welded steel frame with lower steel shelf. Upper shelf is a mix of cast-concrete with a removable walnut surface that is finished to be food safe and u...
Category

After Thonet Carts and Bar Carts Table Black Bentwood Mirror, Europe, 1950s
By Thonet
Located in Mombuey, Zamora
* Price shipping to US consult This piece is original, it was manufactured like this, it is not an assembly of different pieces. I've only seen another one like it but in another co...
Category

Mid-Century Modern Bar Cart
By Cesare Lacca
Located in Austin, TX
Bar cart from Italy by designer Cesare Lacca. This piece is made of beech wood and glass. There is a top tray that lifts off for functionality.
Category

French Antique Bar Cart
Located in Austin, TX
Bar cart in gilt brass, French, featuring a detachable tray up top and a bottle holder off the bottom. We love the scale of this piece - perfect for serving drinks!
Category

Oval Brass Bar Cart with Removable Top Tray and Bottles Holder by Maison Jansen
By Maison Jansen
Located in Marcq-en-Baroeul, FR
This oval bar cart is made of brass. It has a removable top tray and bottles holder on bottom tray. This is a French work by Maison Jansen. Circa 1940.
Category

Vintage Medical Trolley Side Table
Located in Norwich, GB
A vintage medical trolley with drawer. Circa 1950. It has the original finish, showing some scuff marks expected with use, but generally in good condition, please refer to the pho...
Category

Vintage Cocktail Table
Located in Bastogne, BE
- Cocktail vintage table in Bauhaus style - Chrome plating. Tinted glass - There are slight signs of wear, which underlines the age of the table.
Category

Midcentury Italian Bamboo and Rattan Oval Serving Side Bar Cart, 1960s
Located in Roma, IT
Fabulous midcentury two-tiers bar trolley in fantastic vintage conditions. This wonderful item was produced in Italy during the 1960s. This fantastic piece has a bamboo structure ...
Category

Schonbuch Grace Night Blue Trolley by Sebastian Herkner
By Schönbuch, Sebastian Herkner
Located in New York, NY
A future classic. The clear lines and stylish practicality of the GRACE serving trolley make for a winning combination. Its minimalist form is the perfect modern twist on a classic i...
Category

Bar Cart in the Style of Milo Baughman

Midcentury White Plastic and Metal Chrome Italian Bar Cart Oval, 1950s
Located in Roma, IT
Very rare midcentury bar cart in white plastic and chromed metal. This piece is in very good condition, was designed in Italy during the 1950s. A wonderful piece that will complet...
Category

1960s French Chrome and Glass Drinks Trolley
Located in London, GB
Chic chrome drinks trolley with two Smokey glass shelves and oversized wheels. Tubular frame supports both shelves and creates a handle to one side. The top shelf is surrounded by a ...
Category

Maison Bagués, Rare Set of 3 Neoclassical Style Silvered Brass Nesting Tables
By Maison Baguès
Located in Marcq-en-Baroeul, FR
This rare set of 3 neoclassical style nesting tables on casters is made of silvered brass. These stacking tables were made by famous French designer Maison Bagués, circa 1970.
Category

Maison Jansen Silver Plated Brass, Rolling Nesting Tables with Wheels, France
By Maison Jansen
Located in Roma, IT
Nesting tables in silvered brass from the 1960s. The smallest trolley has two glass shelves, the largest have only one glass. Beautiful state of conservation. The largest size: 55...
Category

Cesare Lacca Midcentury Wood Italian Bar Cart with Glass Serving Trays 1950s
By Cesare Lacca
Located in Roma, IT
Fantastic midcentury wood bar cart with glass serving trays. This piece is attributed to Cesare Lacca and it was designed in Italy during 1950s. This wonderful piece comes with a re...
Category

Widdicomb Sever and Bar Cart
By John Widdicomb
Located in Cincinnati, OH
A dark walnut fold out rolling bar and serving cart with one drawer, black leather end handles, brass X-base and black wheels. There are two cut-out to the top for opening, when fold...
Category

Rosewood Bar or Serving Cart by M. H. Mobler, Svendborg
By M H Møbler 1
Located in San Mateo, CA
Danish rosewood bar cart made by M. H. Mobler. This cart has pull out leaves on the ends. One has a laminate inset to protect against spills and wet items. The cart has beautiful ric...
Category

Aldo Tura Side Table
By Aldo Tura
Located in Dronten, NL
Beautiful side table designed by Aldo Tura, Italy, circa 1965. Lacquered goatskin parchment with handles and wheels in brass. The superior craftsmanship is a hallmark of Aldo Tura....
Category

Champagne European Powder Coated Metal Drinks Cart with Smoke Glass Shelves
By Christophe de la Fontaine
Located in Paris, FR
Named the "Come as You Are" cart by its designers, this modern and sleek drinks cart makes an old habit worth reliving. This is a solid, quality European crafted piece that functions...
Category

Forever a sleek and elegant furnishing that evokes luxury and sophistication, a vintage bar cart will prove both functional and fabulous in your living room.

Bar carts as we know them were originally conceived as tea trolleys — a modest-sized table on wheels, sometimes featuring both an upper and lower shelf — to help facilitate tea service during the Victorian era in England. Modern bar carts weren’t really a common fixture in American interiors until after the end of Prohibition in the 1930s, when they were rolled onto the sets of Hollywood films. There, they suggested wealth and status in the dining rooms of affluent characters.

As tough as the 1930s had been on the average working American, the postwar era yielded economic stability and growth in homeownership. Increasingly, bar carts designed by the likes of Edward Wormley and other furniture makers became an integral part of sunken living rooms across the United States in the 1950s.

Bar carts were a must-have addition to the sensuous and sleek low-profile furnishings that we now call mid-century modern, each outfitted with the finest spirits and savory snacks that people had to offer. And partially owing to critical darlings like Mad Men, vintage cocktail carts have since seen a resurgence and have even become a selling point in restaurants.

Bar carts not only boast tremendous utilitarian value but also introduce a fun, nostalgic dynamic to the layout of your space, be it in the bar area or elsewhere. In addition to showcasing your favorite bottles of rye and local small-batch gin — or juices and mocktail ingredients — there is an undeniable allure to stacking statement glassware, vintage martini cocktail shakers and Art Deco decanter sets atop your fully stocked mid-century modern bar cart. And one size or style doesn’t fit all — an evolution of cocktail cart design throughout history has yielded all manner of metal bar carts, rattan carts and more.

We invite you to add a few more dashes of class to cocktail hour — peruse the vast collection of antique and vintage carts and bar carts on 1stDibs today.