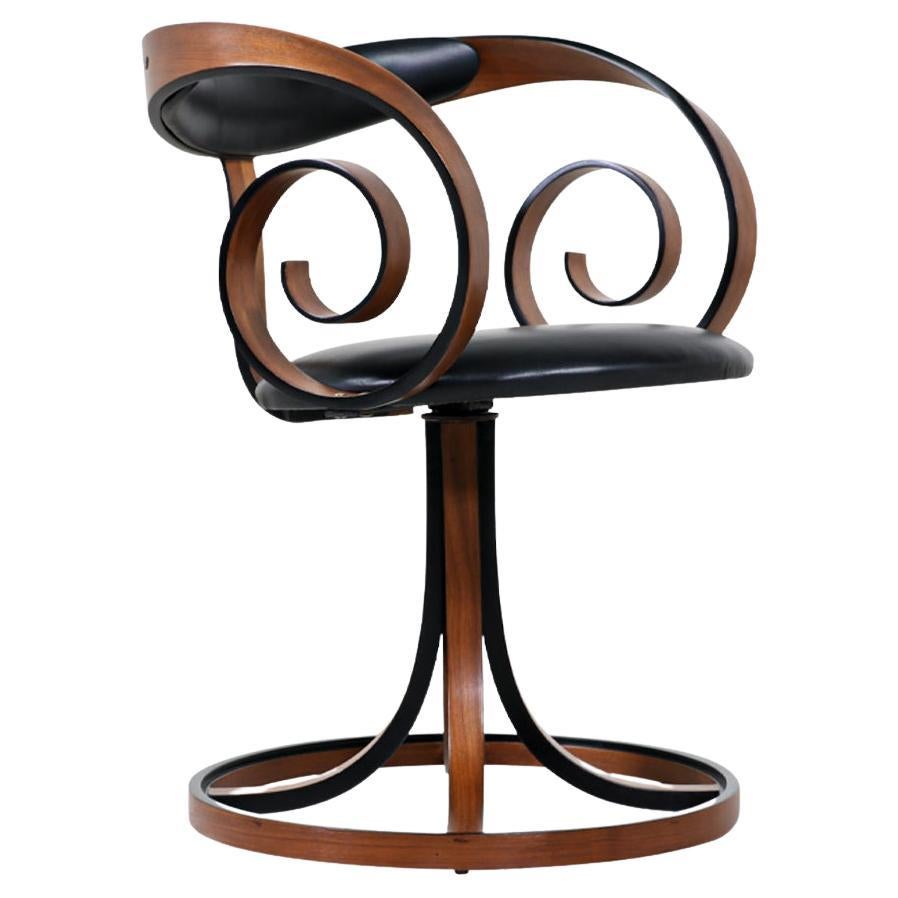 Swivel Chair by Mulhauser for Plycraft 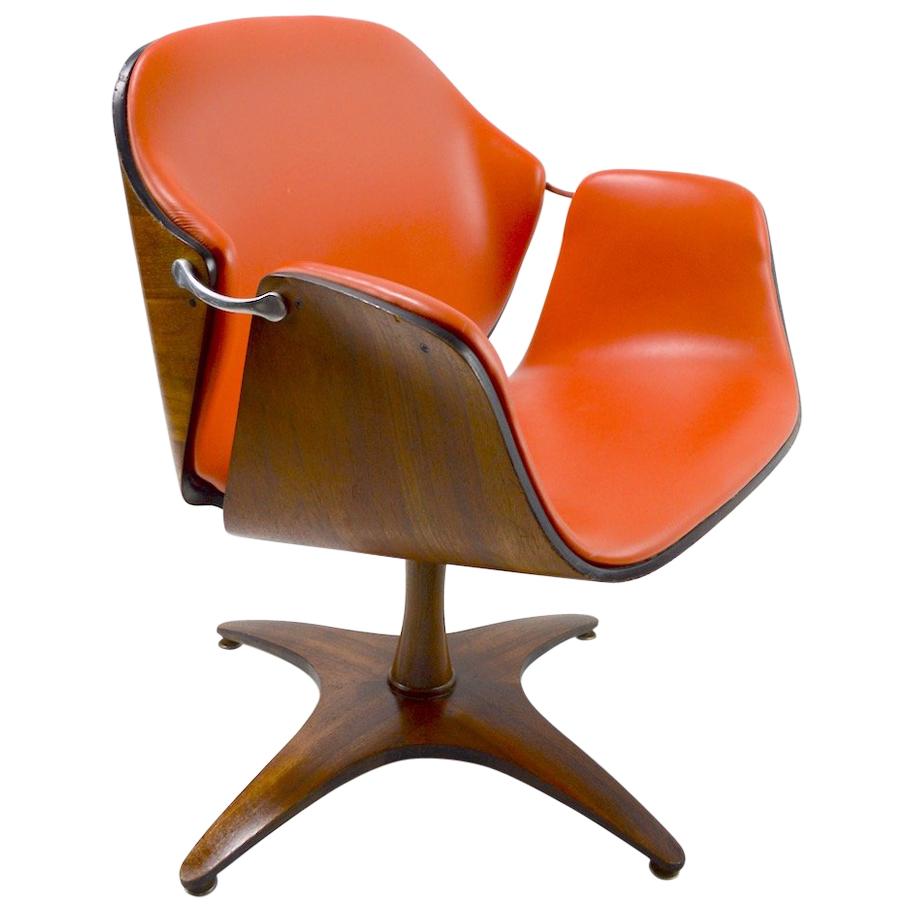 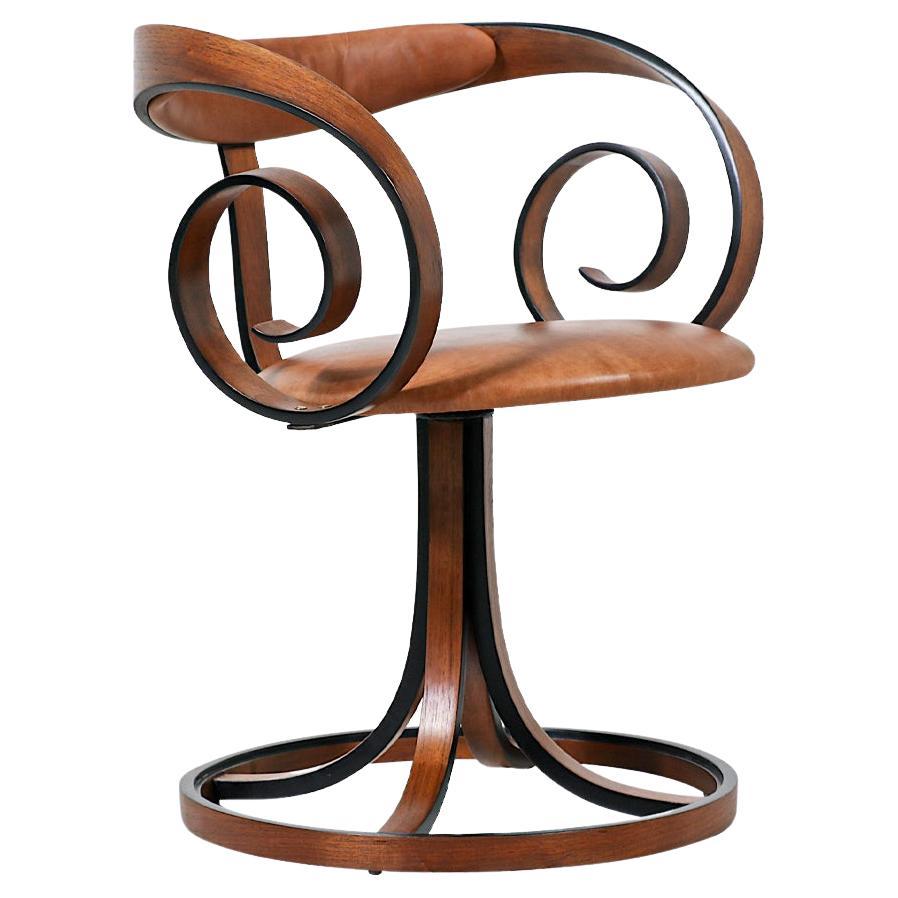 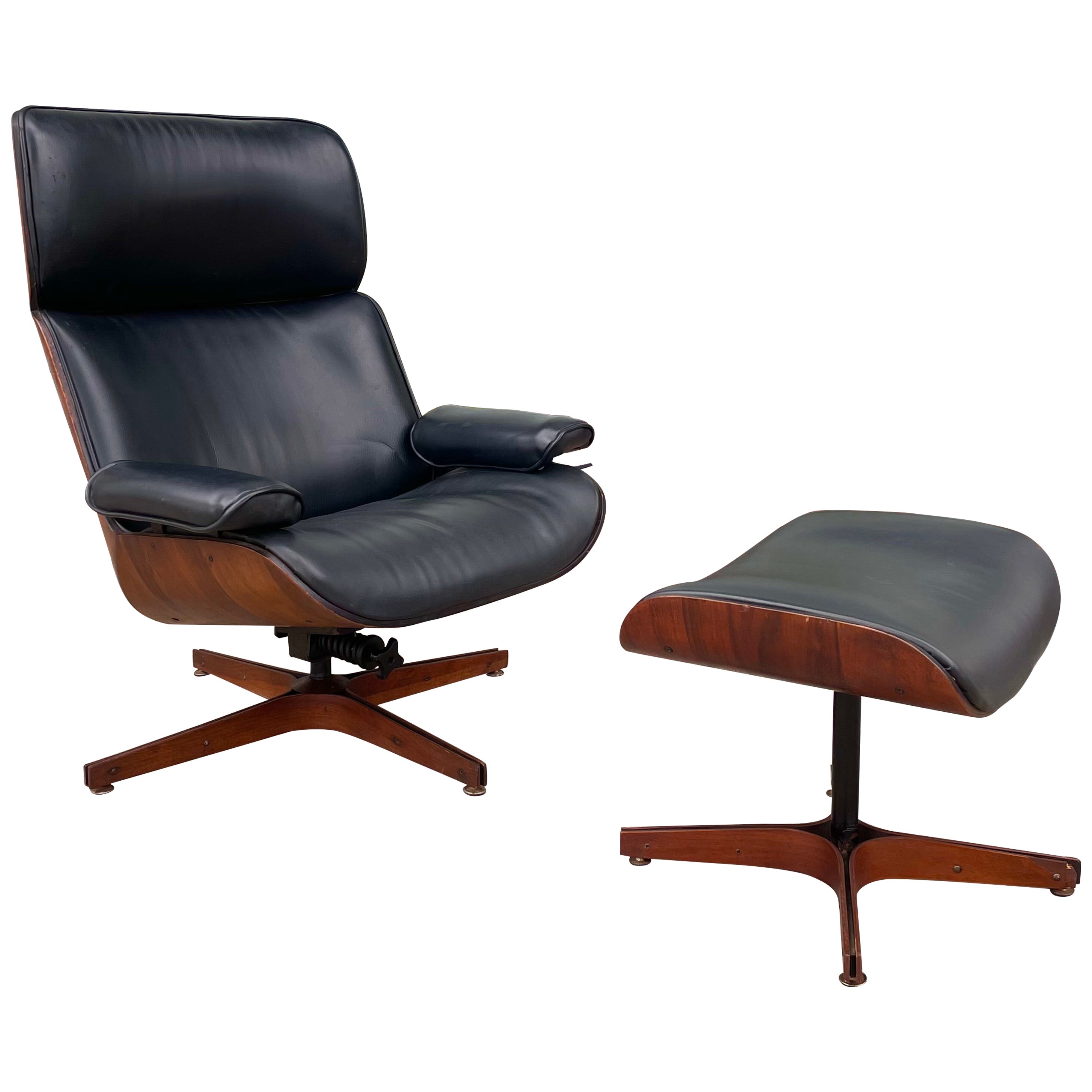 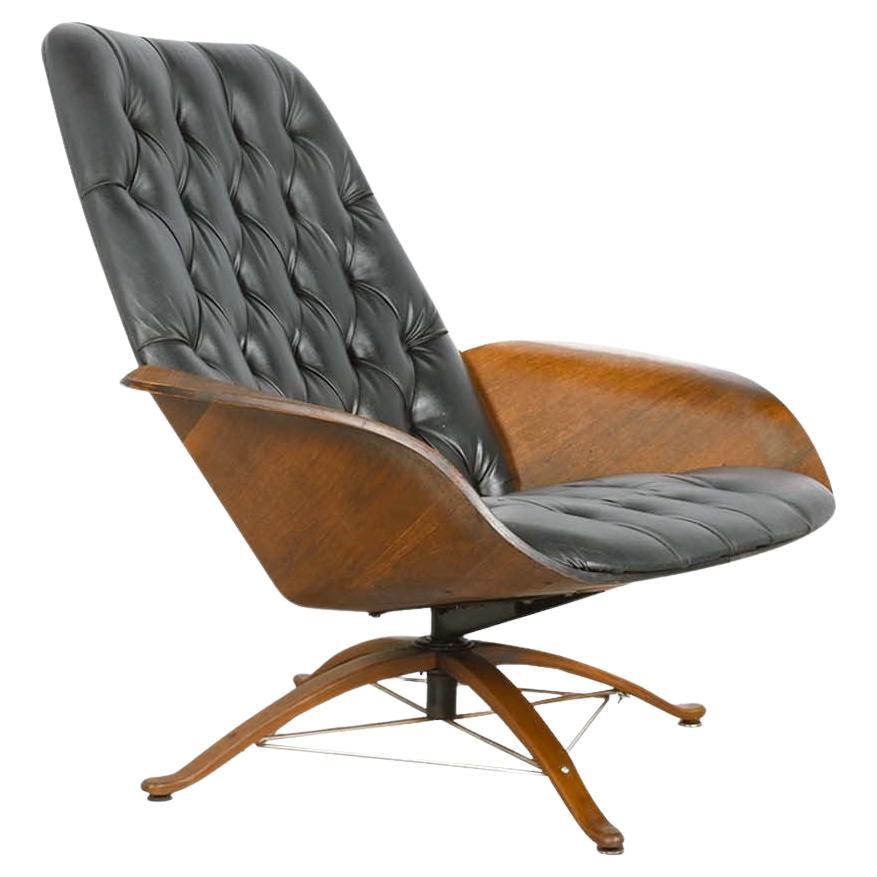 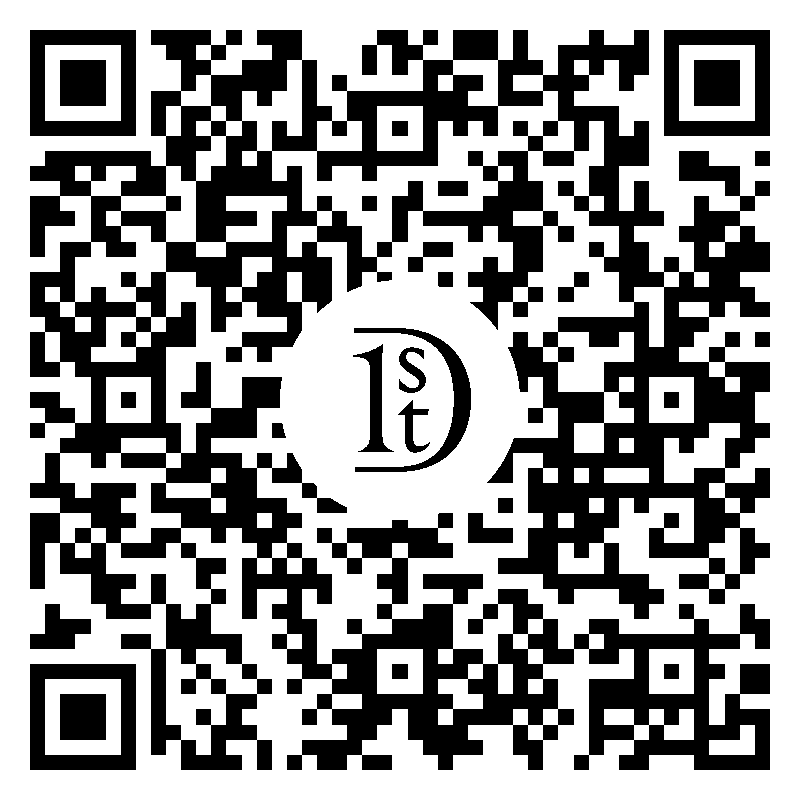 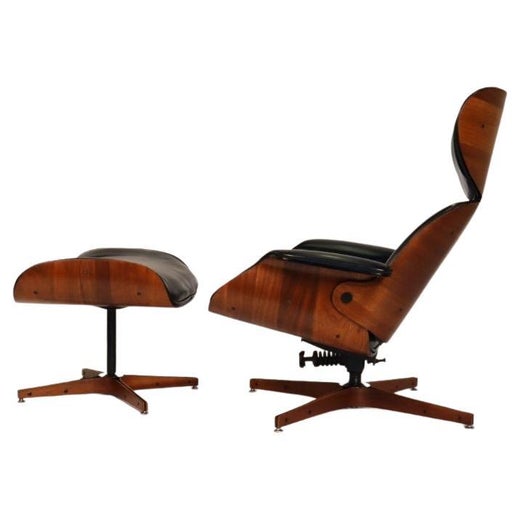 Reflecting on George Mulhauser’s decades-long career conjures up images of him sitting in his well-known Mr. Chair — a luxurious reclining mid-century modern lounge chair for Plycraft made from a single sheet of plywood — and thinking to himself what mark he would leave on the world of furniture design.

Mulhauser studied industrial design at Pratt Institute in Brooklyn, New York, and graduated in 1953. His early designs were quite venturesome and landed him his first design job in the Manhattan studio of architect, journalist and designer George Nelson, who was the director of design for legendary Michigan furniture manufacturer Herman Miller.

In 1955, Mulhauser designed his now-immediately recognizable Coconut chair. Angular and visually striking, this alluring lounge chair, with its sloping molded plastic shell, was something of a prelude. Soon, Mulhauser would make the acquaintance of American furniture designer Paul McCobb. Mulhauser collaborated with McCobb on concepts for molded fiberglass chairs, and McCobb’s Origami chair for Directional would become a big hit on the mid-20th century market.

Mulhauser kept busy. In his home studio, he sketched out each furniture design on paper and then translated them to handmade scale models. Mulhauser engaged his neighbors and family in trying out his sophisticated seating and gathered feedback for improvements. He designed his Mr. Chair for Plycraft — an adjustable armchair with a seat of tufted leather that yielded a series — and collaborated with many other companies throughout his career, including Directional, Singer, Overman and the Design Institute of America. He also taught furniture design at Pratt Institute, while the Newark School of Fine and Industrial Arts brought him on as an instructor of 3-D design.

On 1stDibs, find a collection of vintage George Mulhauser chairs, lounge chairs and other furniture. 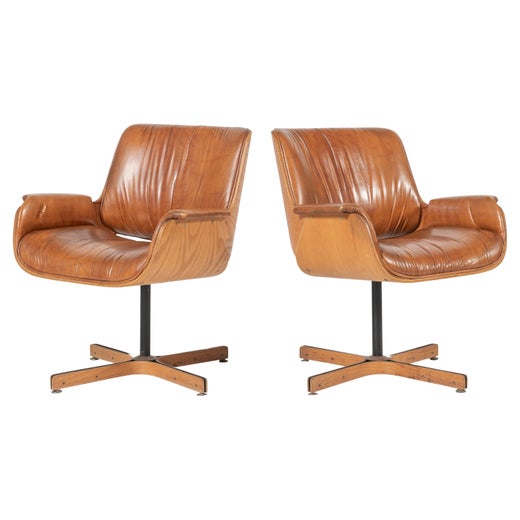 While the history of Plycraft is marred by scandal and lawsuits, the American furniture manufacturer produced charming lounge chairs and other seating during the mid-century modern era that are sought after by collectors today.

Paul Goldman founded Plycraft in Lawrence, Massachusetts, in 1953 — he had secured military contracts for the manufacturing of bentwood products during World War II and was able to move into the commercial market thereafter. While Plycraft counted fiberglass boats among its early offerings, its primary focus switched to furniture when what we now call mid-century modernism hit its stride and more designers began to explore the possibilities of bentwood furniture thanks to the revolutionary work of Alvar Aalto and Michael Thonet. Goldman was Plycraft’s principal designer, but George Mulhauser and Norman Cherner were also enlisted to create furniture for the brand.

In 1952, a designer named John F. Pile, who was working in the studio of Herman Miller design director George Nelson, conceived what he called the Pretzel chair in walnut and birch. Pile’s seat, which was inspired by European modernist design, proved too costly to manufacture and it had structural problems. So the illustrious Michigan furniture maker subcontracted Plycraft to produce the Pretzel chair — an agreement that was short-lived owing to a dispute between Plycraft and Herman Miller.

Goldman subsequently tapped Norman Cherner — an innovative architect, designer and professor at Columbia University who was recommended by Nelson — to create an iteration of the Pretzel chair that would be stronger and cost-efficient to manufacture.

Cherner submitted a comfortable, curvaceous update to the Pretzel chair in molded plywood but was told by Plycraft that the project was being scrapped and his drawings shelved. Months later, Cherner was shocked to stumble upon his redesigned chair in a furniture showroom in New York under the Plycraft name. Cherner sued Plycraft and won — the Cherner chair later appeared in a Norman Rockwell painting on the cover of The Saturday Evening Post.

In the late 1950s, designer George Mulhauser created the Mr. Chair for Plycraft, an adjustable, tilting, swivel armchair with a matching ottoman. Mulhauser was also a designer in George Nelson’s studio and is credited with having conceived the iconic Coconut lounge chair for Herman Miller. With its tufted leather seat and shell crafted from a single sheet of plywood, the Mr. Chair lounge — part of a line of seating for which Mulhauser was commissioned — bears a resemblance to the now-legendary Eames lounge chair, which was designed by Ray and Charles Eames for Herman Miller. Mulhauser’s chair was very successful for Plycraft. A model was even spotted on an episode of Star Trek.

1stDibs Buyer Protection Guaranteed
If your item arrives not as described, we’ll work with you and the seller to make it right. Learn More
About the Seller
4.9
Located in Keego Harbor, MI
Gold Seller
These expertly vetted sellers are highly rated and consistently exceed customer expectations.
Established in 2014
1stDibs seller since 2017
805 sales on 1stDibs
Typical response time: 1 hour
More From This SellerView All
People Also Browsed
You May Also Like