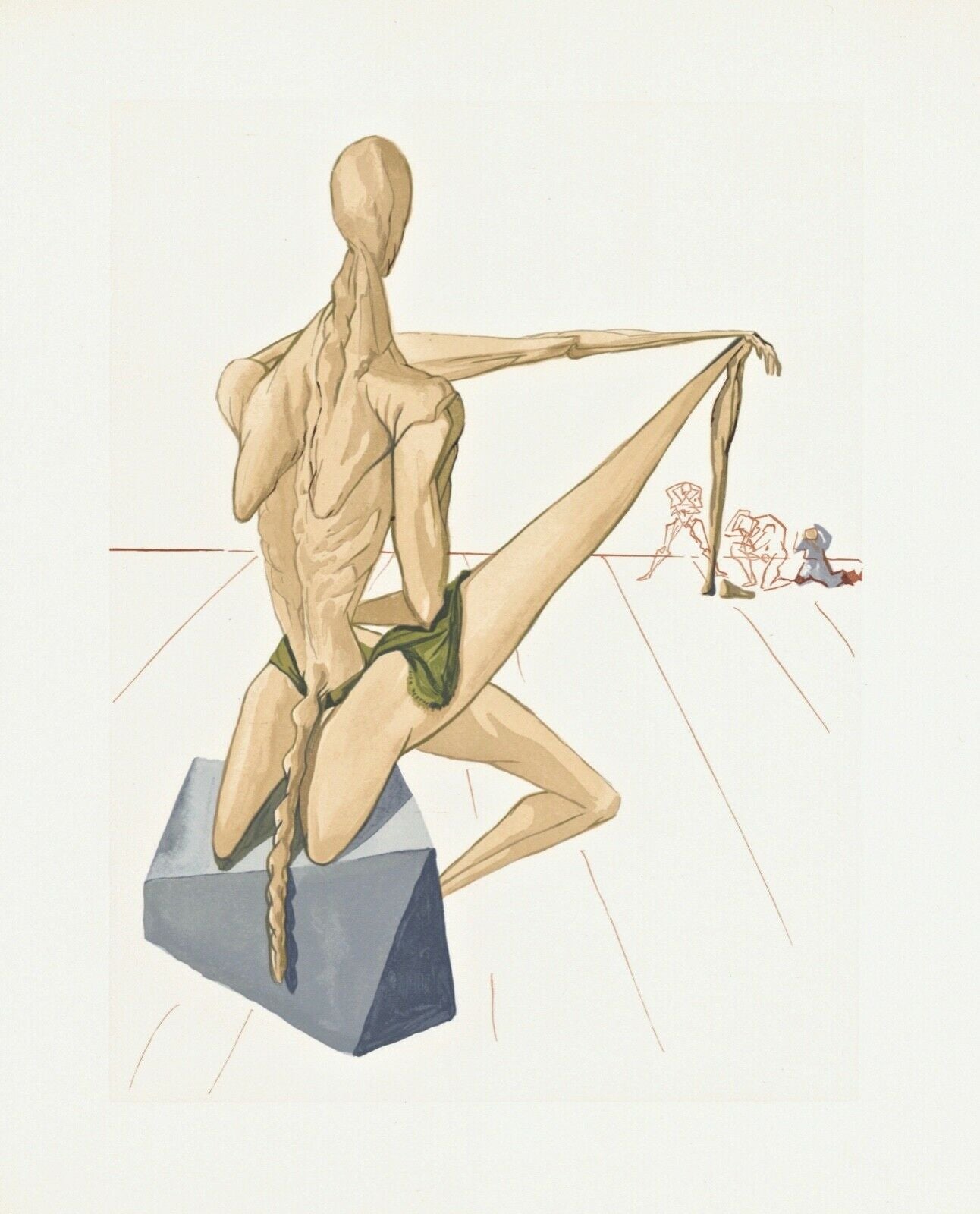 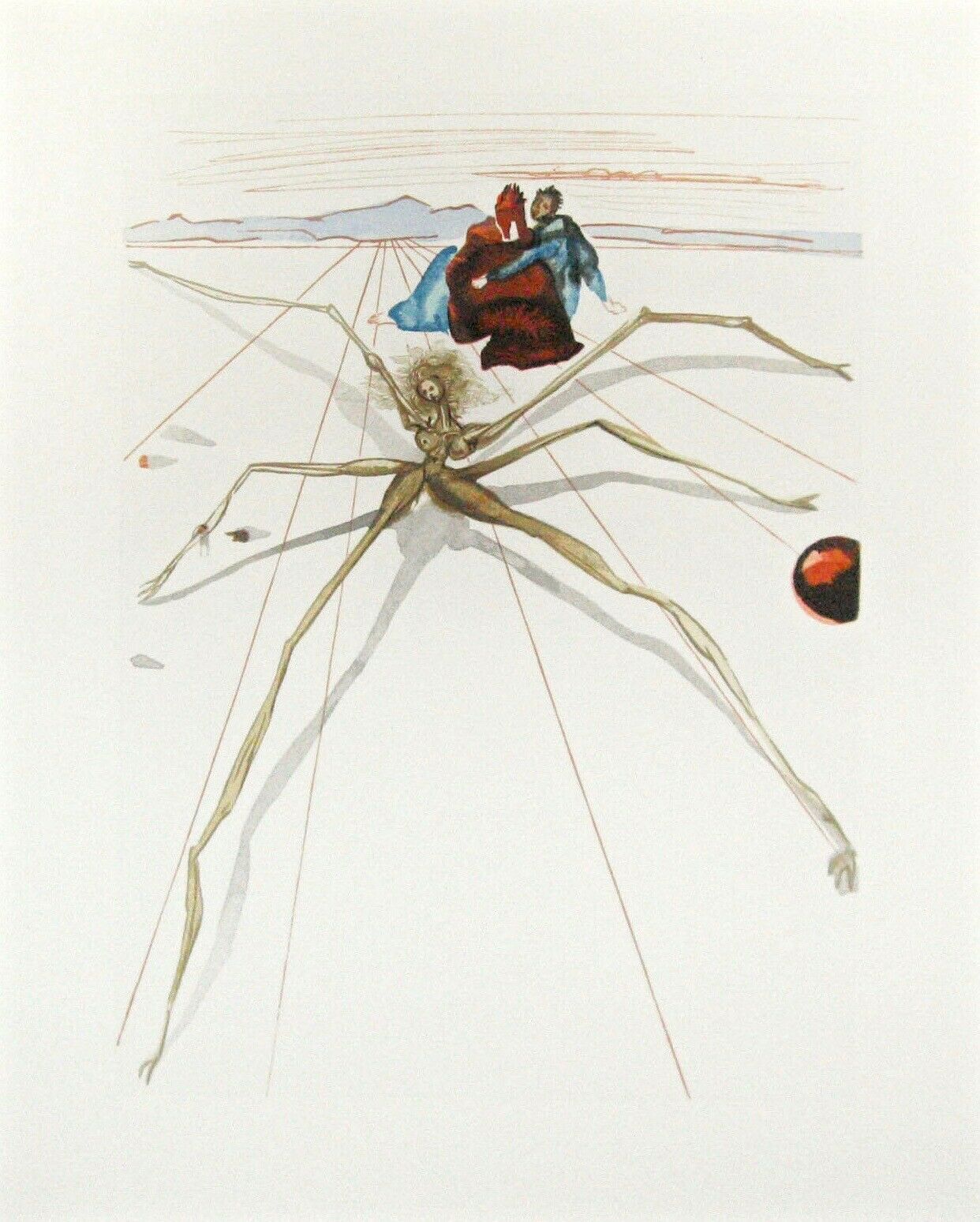 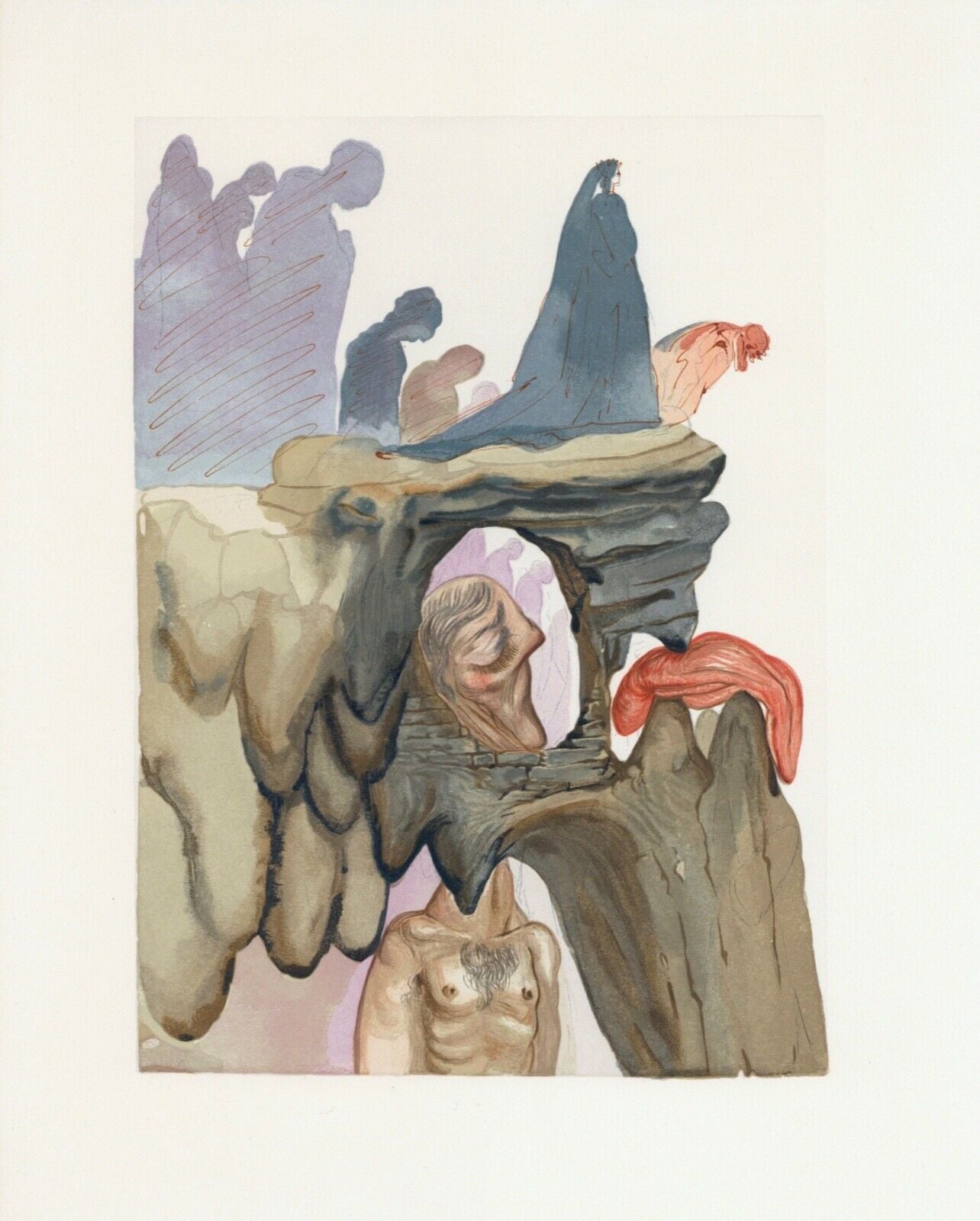 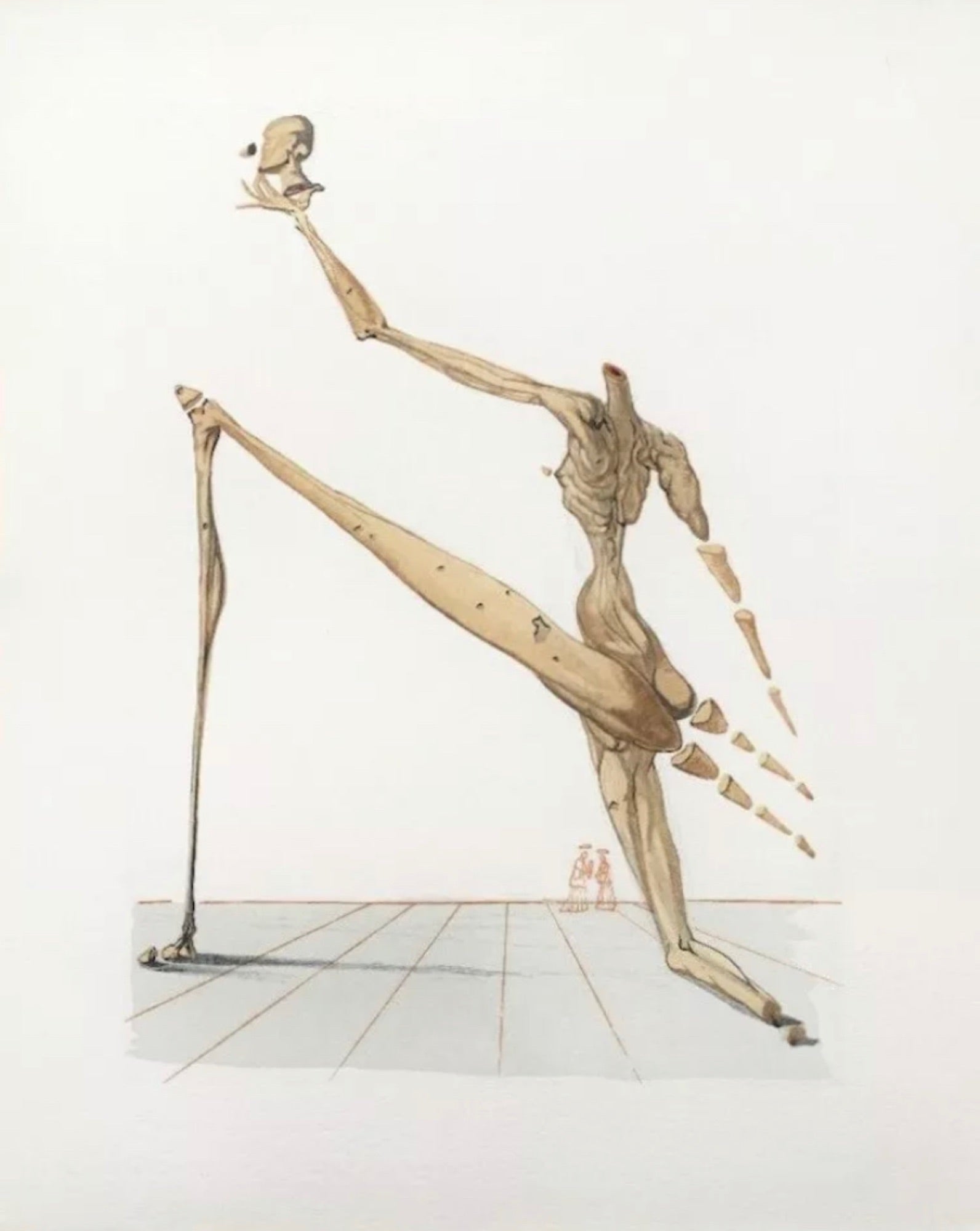 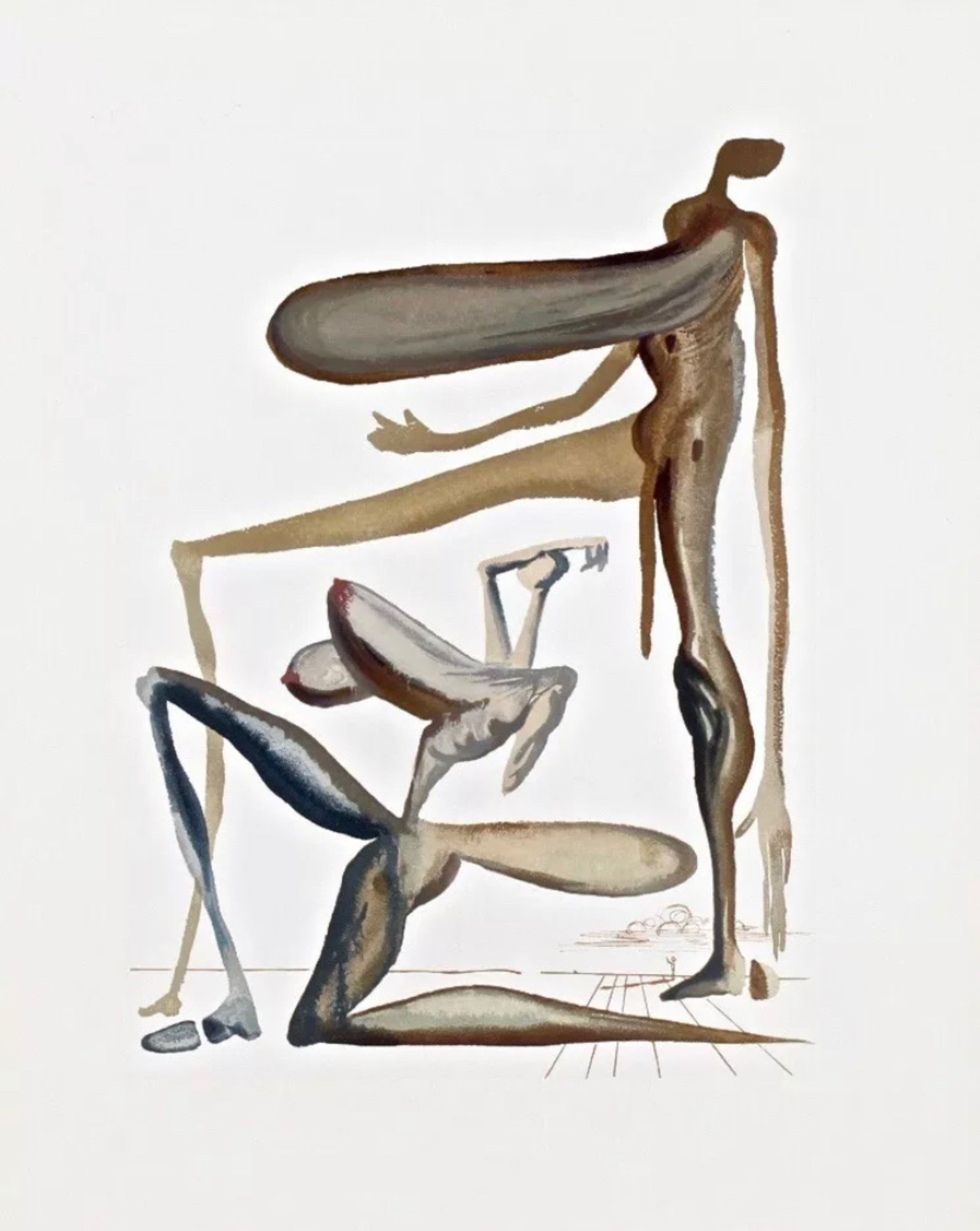 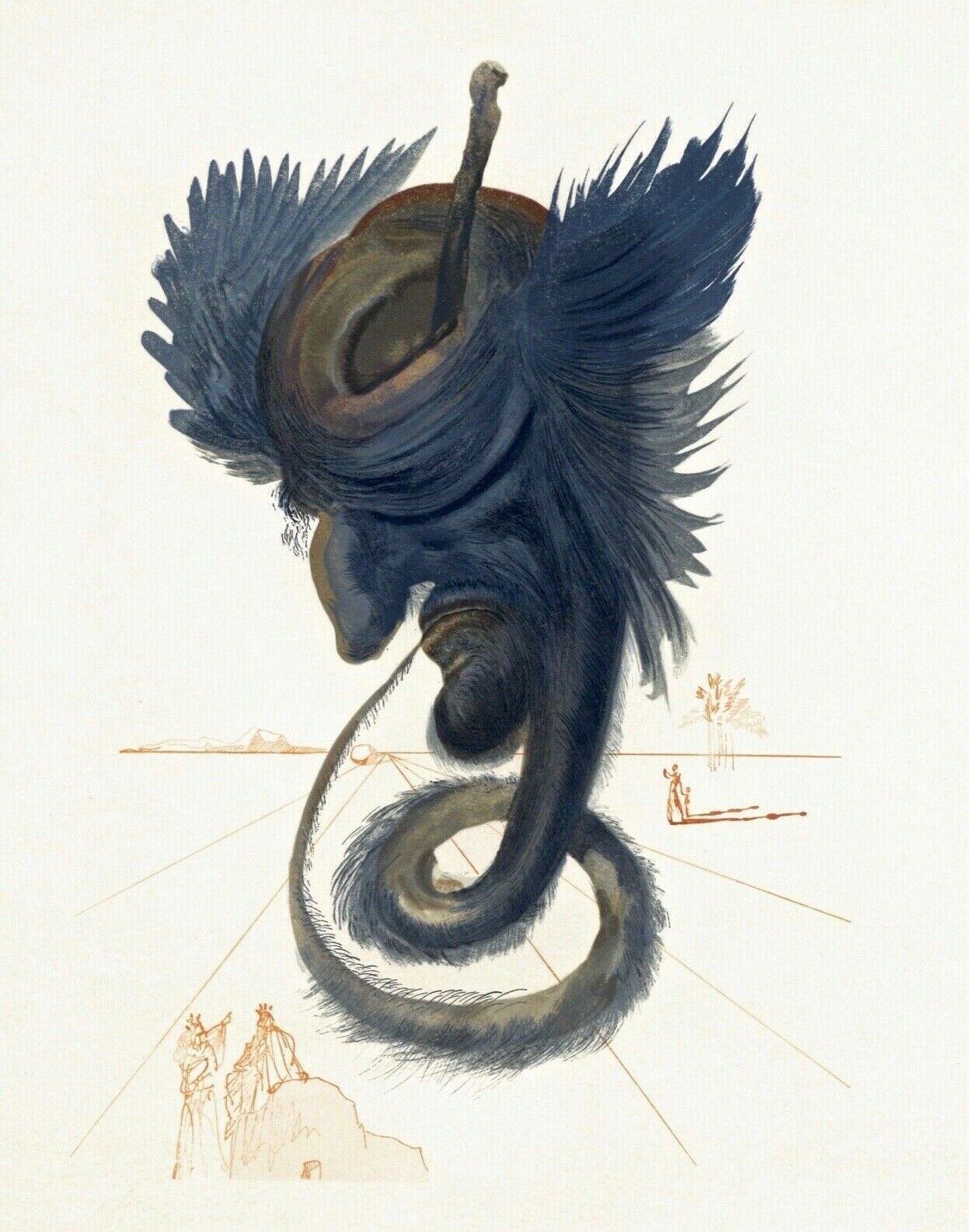 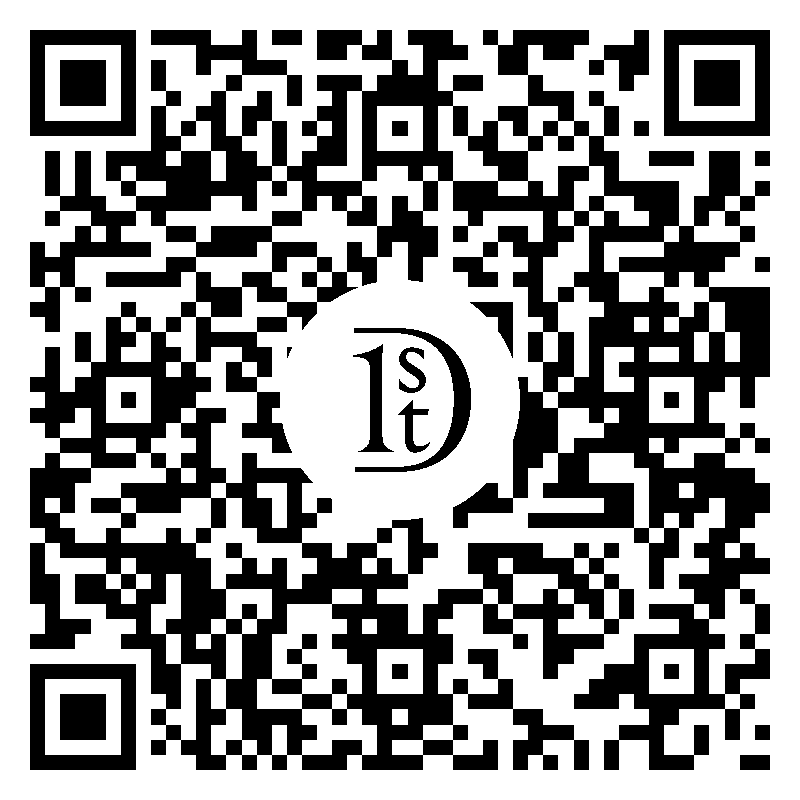 Title: Hell Canto #7, The Divine Comedy (Field 196) Year: 1959-1964 Medium: Engraving on BFK Rives paper Edition: 4765, plus proofs Size: 13 x 10.25 inches Condition: Excellent Notes: Published by Jean Estrade of Les Heures Claires, Paris. During the 1950's Salvador Dali was commissioned to illustrate The Divine Comedy by Dante Alighieri. Dali created 101 watercolors to represent scenes from Dante's travels through Inferno, Purgatory and Paradise. The extravagantly surrealistic art works were not well received by the public, however, work began on the engraving of woodblocks, chosen as the best medium to represent the nuances of Dali's compositions into print format. The woodblocks were destroyed after printing. The Divine Comedy is held to be one of Dali's masterpieces and the artist himself considered this series to be among his most important works. SALVADOR DALI (1904-1989) Salvador Dali's work is associated with the surrealist movement of the 20th Century. A diverse and multi-talented artist, Dali is considered one of the most collected artists today, and his works offer an incredible opportunity for enormous appreciation in value. In addition to his original works, Dali produced works on paper for reproduction using dry point, etching, woodcut, and lithography. Many of his works are held in prestigious private and public collections world-wide. ABOUT SELLER DO YOU HAVE ARTWORK TO SELL? WE ARE ACTIVELY SEEKING CONSIGNMENTS AND EXCEPTIONAL OBJECTS TO PURCHASE OUTRIGHT! Art Commerce, formerly F. Daniello Fine Art, was founded in 2002 and is based in Fairfield, Connecticut. As a purveyor of masterworks of the 20th and 21st centuries, our consultancy serves the Greater New York Area and has frequently acted as an internal supplier to its leading galleries and auction houses including Christie’s, Sotheby’s, Bonham’s & Butterfield’s, and Phillips de Pury. The experienced staff of Art Commerce has proudly served in the development of private and public collections throughout the United States and the world including the Smithsonian Institution, Library of Congress, the Board Of Governors of the Federal Reserve System, the Museum of Fine Arts Boston, the Detroit Institute of Arts, the Los Angeles County Museum of Art, the National Hellenic Museum, the National Czech & Slovak Museum, and the National Museum of Women in the Arts, amongst others. Art Commerce welcome’s all inquires including those from prospective buyers, sellers, and consignors of exceptional objects.

Instantly recognizable by his waxed, upturned mustache, the flamboyant Salvador Dalí (1904–89) is one of modern art’s most distinctive figures. He is also one of the icons of the 20-century avant-garde Surrealist movement, whose dreamlike images, drawn from the depths of the unconscious, he deployed in paintings, sculptures, prints and fashion, as well as in film collaborations with Luis Buñuel and Alfred Hitchcock.


Dalí was born in Figueres, Catalonia, and even as a youngster, displayed the sensitivity, sharp perception and vivid imagination that would later define his artworks. In these, he conjured childhood memories and employed religious symbols and Freudian imagery like staircases, keys and dripping candles to create unexpected, often shocking pieces.


His use of hyperrealism in conveying Surrealist symbols and concepts that subvert accepted notions of reality is epitomized in what is perhaps his most recognizable painting, The Persistence of Memory (1931), in which he depicts the fluidity of time through melting clocks, their forms inspired by Camembert cheese melting in the sun. Dalí’s artistic genius, eccentric personality and eternal quest for fame made him a global celebrity. “Each morning when I awake, I experience again a supreme pleasure,” he once said. “That of being Salvador Dalí.”

About the Seller
4.9 / 5
Located in Fairfield, CT
Platinum Seller
These expertly vetted sellers are 1stDibs' most experienced sellers and are rated highest by our customers.
Established in 2002
1stDibs seller since 2020
154 sales on 1stDibs
Typical response time: <1 hour
More From This Seller
View All From Seller