How to Decorate with Lucite Furniture 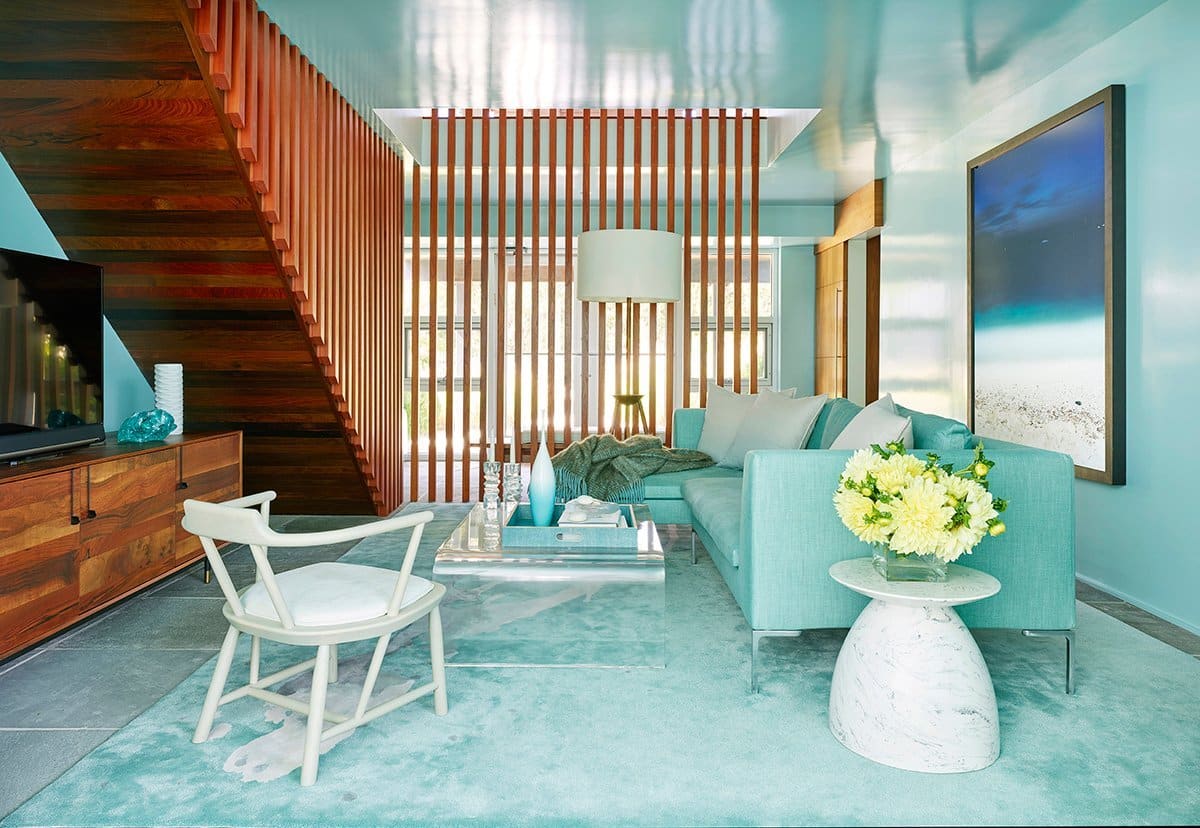 Lucite, or transparent plastic, furniture has been on design editors’ radars for several seasons now, but thanks to a renewed interest in pieces from the late 1960s and ’70s, the trend is expected to reach fever pitch this fall.

“I think there’s a freshness and cleanness to it,” says Fawn Galli, an interior designer based in New York. Not only is Lucite practical, since it can work in nearly any environment, it’s incredibly stylish.

Not sure how to work Lucite into your home? We asked a few of our favorite designers to share what they love about this material, plus select a piece from 1stdibs and tell us how they would use it in a room.

“I think there’s something really nice about the simplicity of anything Lucite or acrylic — it feels lightweight,” says Tamara Eaton, whose eponymous firm deftly balances traditional and modern designs. Even in the most historical setting, “you can still introduce some Lucite or something kind of lightweight and not have it feel like a distinct interjection, but a playful one that’s more about the shape,” she says. 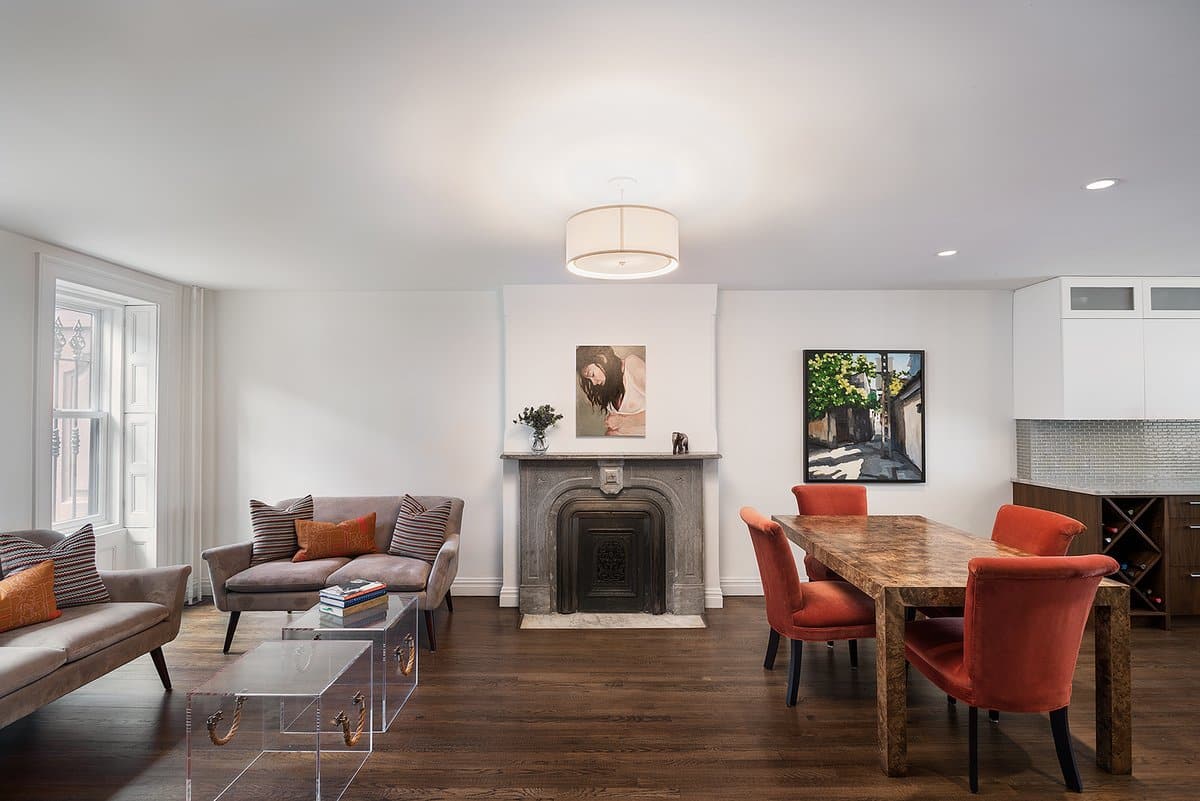 For the living room in a mid-century modern townhouse in Park Slope, Brooklyn, Eaton chose a pair of box-shaped tables with copper handles from Jamie Dietrich. “We didn’t want anything to be too heavy, and that area was a place where [the family] would sometimes move those tables so the kids could play,” she says. The tables doubled as snack trays since the kitchen is nearby. “They have this transportable feel to them that I think was really fun.” 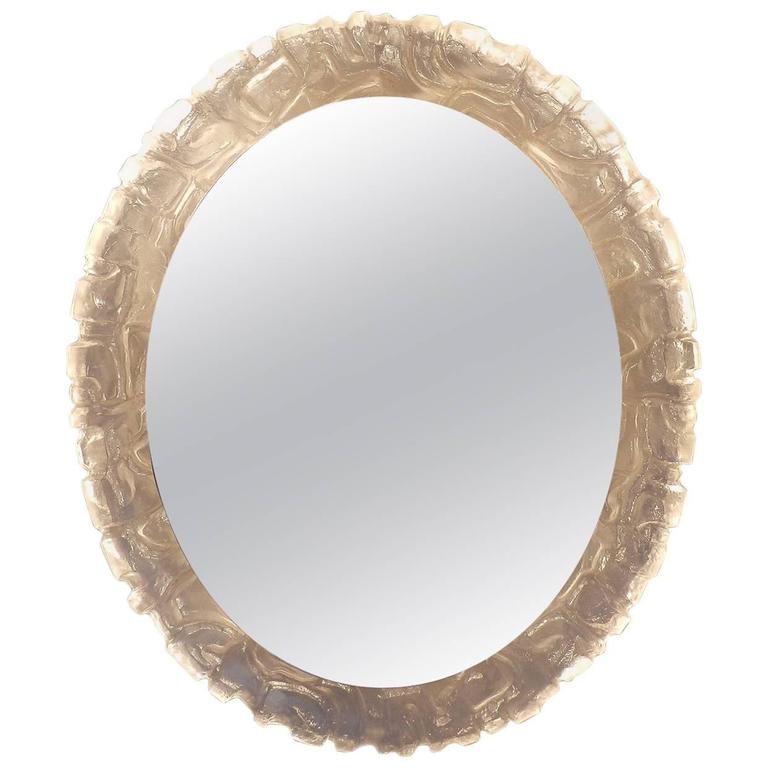 This Erco backlit mirror from the 1970s would be “absolutely gorgeous in a dark powder room where you want moody lighting and a great glow,” Eaton says. Paired with a dark stone sink and brass fixtures, the mirror’s light would create a mood that “feels glamorous, dramatic and a bit sexy.”

The visionary designer, known for crafting eclectic interiors with an eye to the past, favors see-through furniture for its ability to work with a variety of pieces and remain stylish. “It’s just a cool material to mix in with other furnishings, and I think that you can mix it with traditional or contemporary” items, she says. 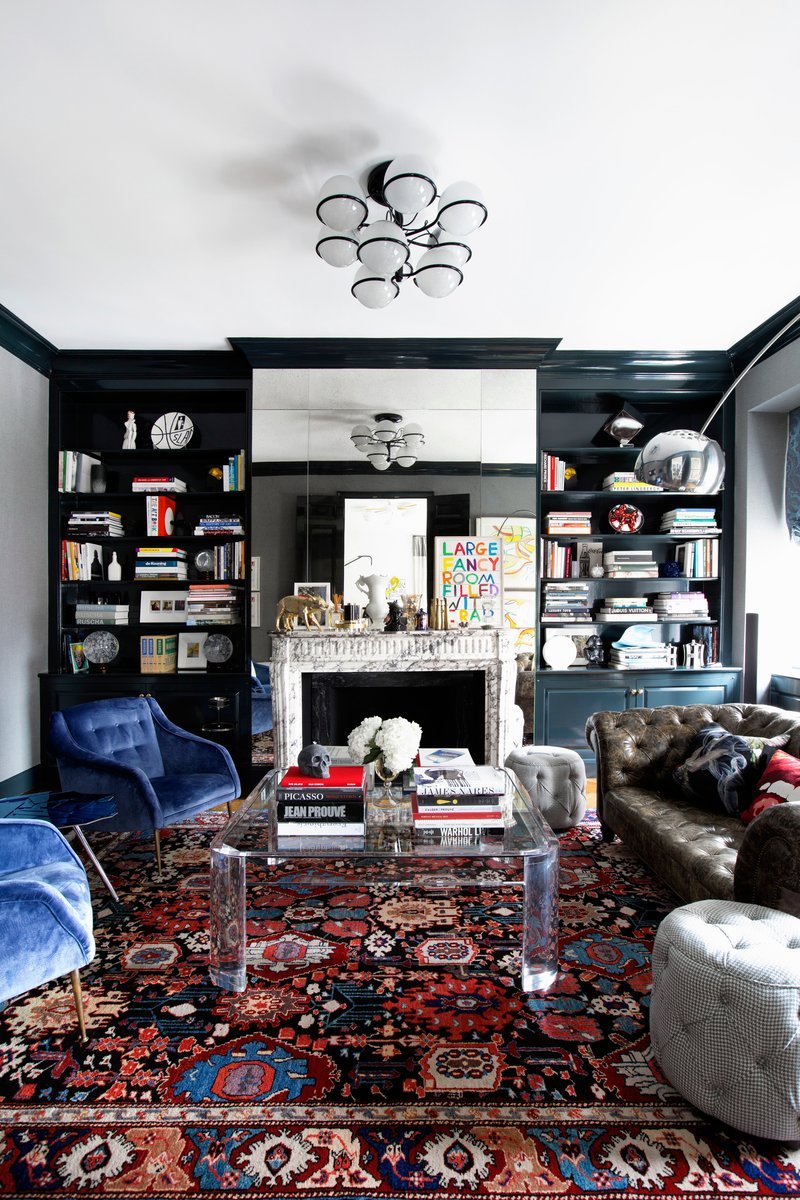 Office and study space on the Upper East Side, by Fawn Galli. Photo Costas Picadas

A London-inspired library in the Upper East Side “needed something that would be cool and funky and hip,” says Galli. So she reached for a Lucite coffee table by Charles Hollis Jones that “just hit the right note” as far as being a light counterpoint to the darker sofa and rug. Galli notes that the table has a “cool luminosity to anchor the room.” 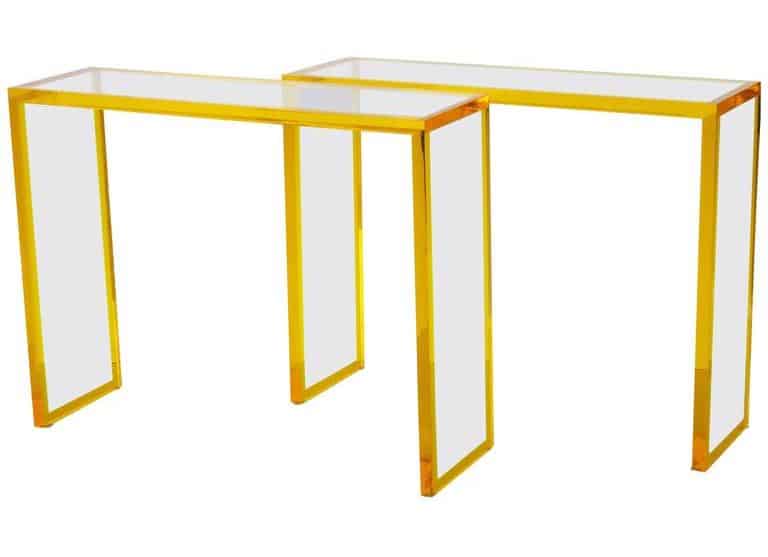 Framed in bands of bright yellow Lucite, these contemporary consoles “bring in everything we love about the material while adding a graphic punch of color to the room,” Galli says. “As a sofa table or a console against the wall, these tables are a statement without being overt. They blend in, but still bring shine and color in an unexpected way.”

Form and function draw interior designer Amy Lau to see-through pieces again and again. “I always use rugs that look like art,” she says, and Lucite allows you to “enjoy that rug and still see it.” Another plus: “It’s so easy to wipe up,” she says, and is not a conductor of heat so it stays the same temperature. With Lucite coffee tables, the piece “becomes almost like a background so that anything I set on it is like art.” 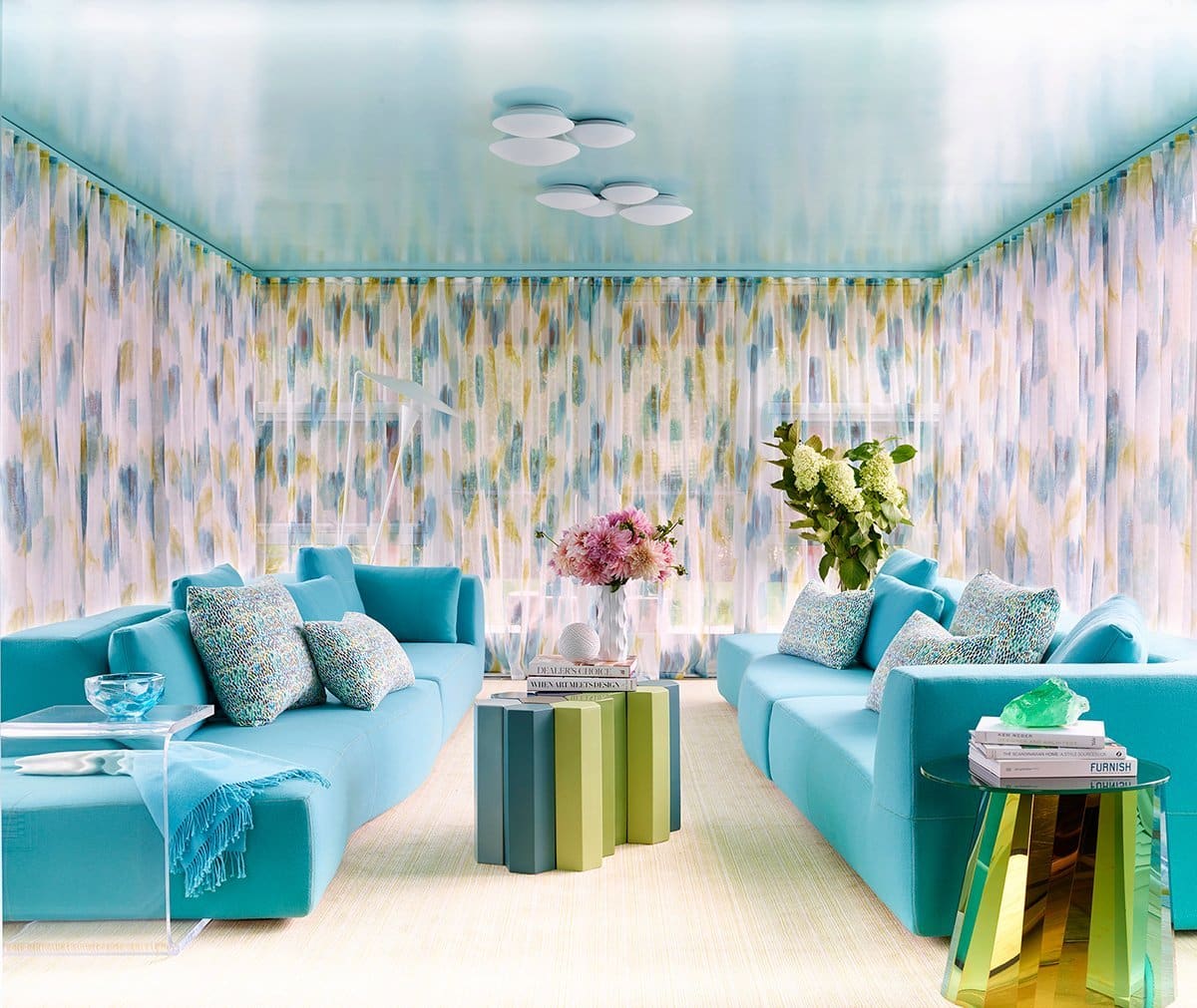 For a dazzling family home in Bridgehampton, New York, Lau added custom Lucite tables that curl up around the sofas like a snack bar. With them, you get “this great function,” but you don’t have to see it in action. The vibrant color-field composition by the late Sagaponack painter Sydney Butchkes remains the room’s focus. 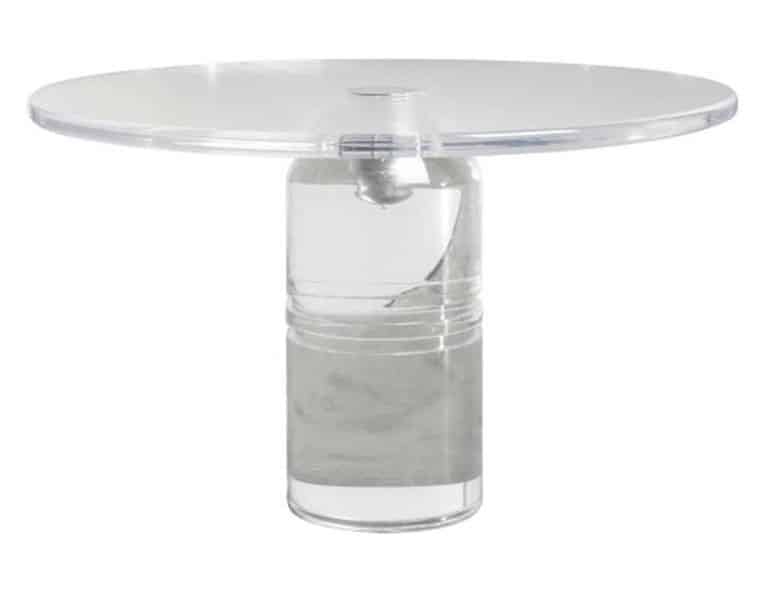 “In particular, I admire work by Charles Hollis Jones, like one of his very rare Le Dome dining tables” from the 1970s, Lau says. “This monolithic piece, with its clean-lined design, can bring a very strong visual accent,” in a dining room, especially when surrounded by beautifully upholstered dining chairs.

For this designer, Lucite never went out of style. “I have always liked using it for certain spots in a space,” he says, particularly “as a juxtaposition with upholstery or more solid-looking pieces.”

How He’s Used It 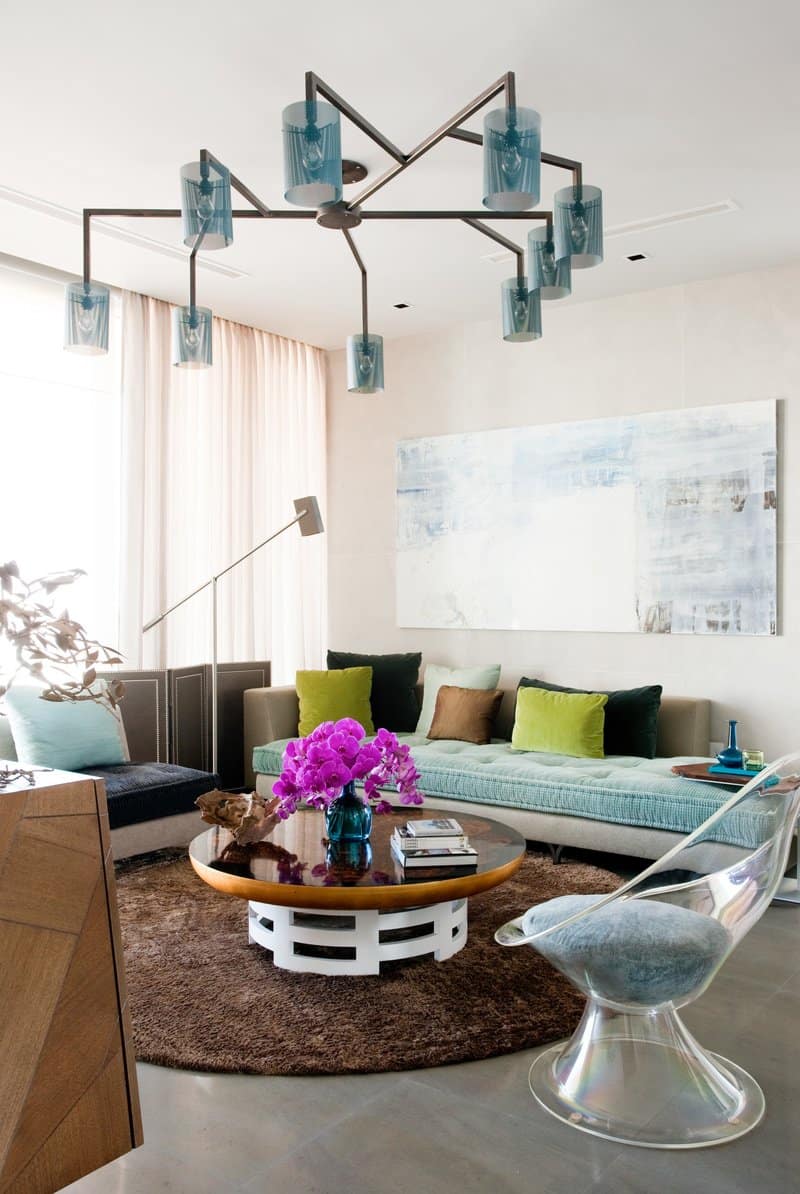 For the living room of a loft-like apartment in South Beach, Roop brought in a mod-looking chair by LaVerne to complement the rest of the setting. “I felt the curved lines of the chair looked nice with the round rug and coffee table,” he said. The fuzzy blue cushion also matches the couch and the painting above. 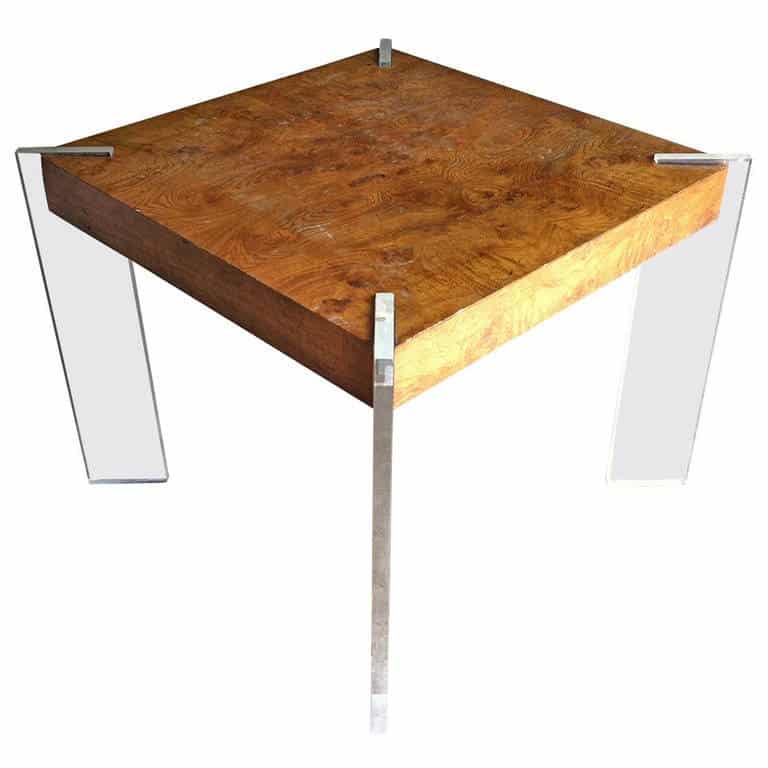 “I love the combination of the burlwood and the acrylic,” Roop said of this mid-century modern table attributed to Vladimir Kagan. “It seems to float in the air.”