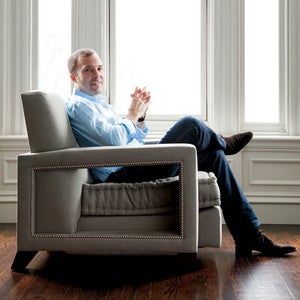 Frank began his firm in 1998 after a career in fine men’s specialty store retailing.

The principles of design he learned in menswear helped give him the basis for formulating and conceptualizing his design schemes. He is inspired by all periods and styles of interiors. He believes in creating original environments that are ‘couture’.

To achieve this it is essential that the ingredients that go into his projects are unique; almost all of the furniture and furnishings he uses are either antique or of his own exclusive design. He travels extensively within the U.S. and overseas to find antique and vintage furnishings specifically for his clients. It is very important to him that his client’s home reflects their personality and how they want to live while being sophisticated in taste.

He was also named by House Beautiful in 2003 as one of the top 25 young designers in America. In 2004 he was included in House Beautiful’s list of the top 120 designers in the United States. Frank has appeared on the PBS television show FIND! as well as This Old House. From 2010 to 2015 Architectural Digest France named him one of the 70 most influential designers internationally. Frank released his first book called The New Bespoke published by Pointed Leaf Press. It is 180 pages with over 160 color images by renowned photographer Eric Roth.

A Point of Hue