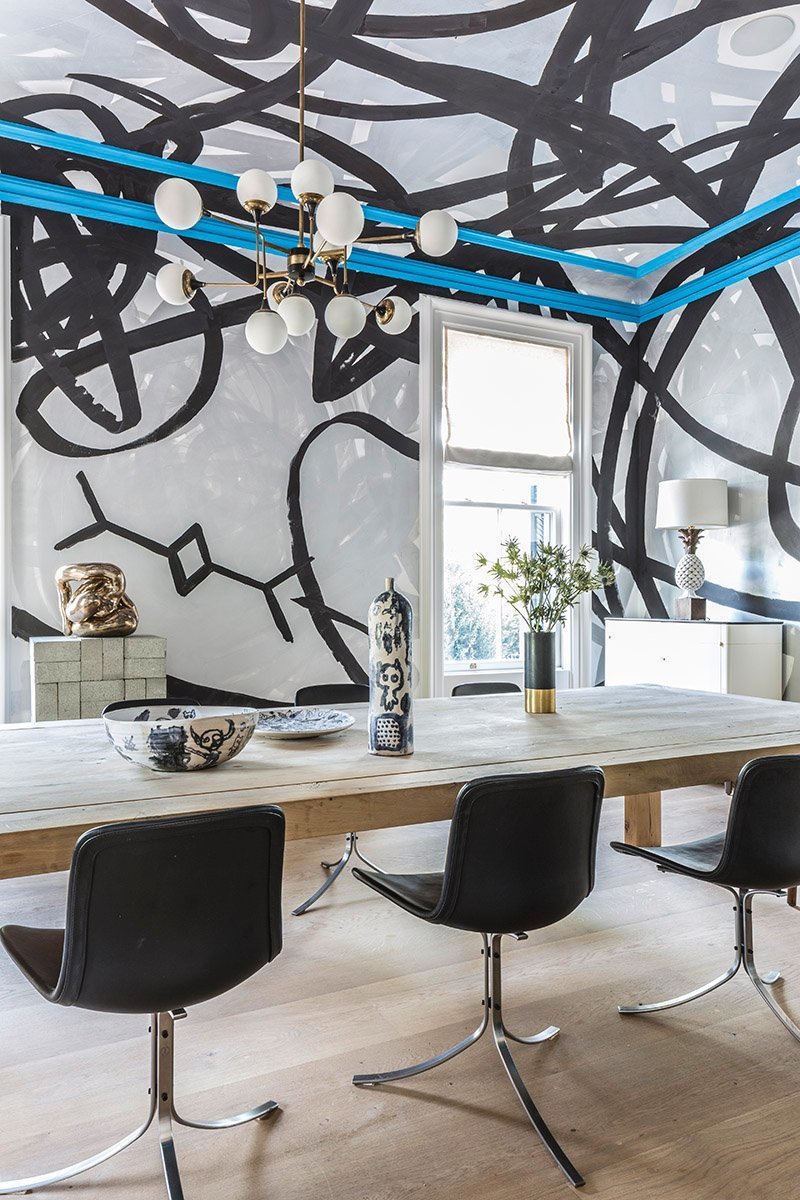 The dining room of designer Sara Story’s Victorian house in New York is a full-on work of art by Otto Zitko. Photo by Marco Ricca

Sure, wallpaper and solid coats of paint are classic decorating choices. But what if walls could get in on some of the design action normally reserved for rugs or art? Perhaps, then, walls could even become artworks.

That’s certainly the motivation behind the inventive surfaces that some of our favorite interior designers have dreamed up for foyers, living rooms, dining areas and even a powder room. To execute their transporting creations, they are utilizing a slew of materials ranging from industrial tape to silver leaf to abalone shells.

And in the age of Instagram, where novelty is rewarded, it’s even more tempting to experiment with boldly adorned walls and ceilings. Herewith are six rooms that pack a serious vertical punch. 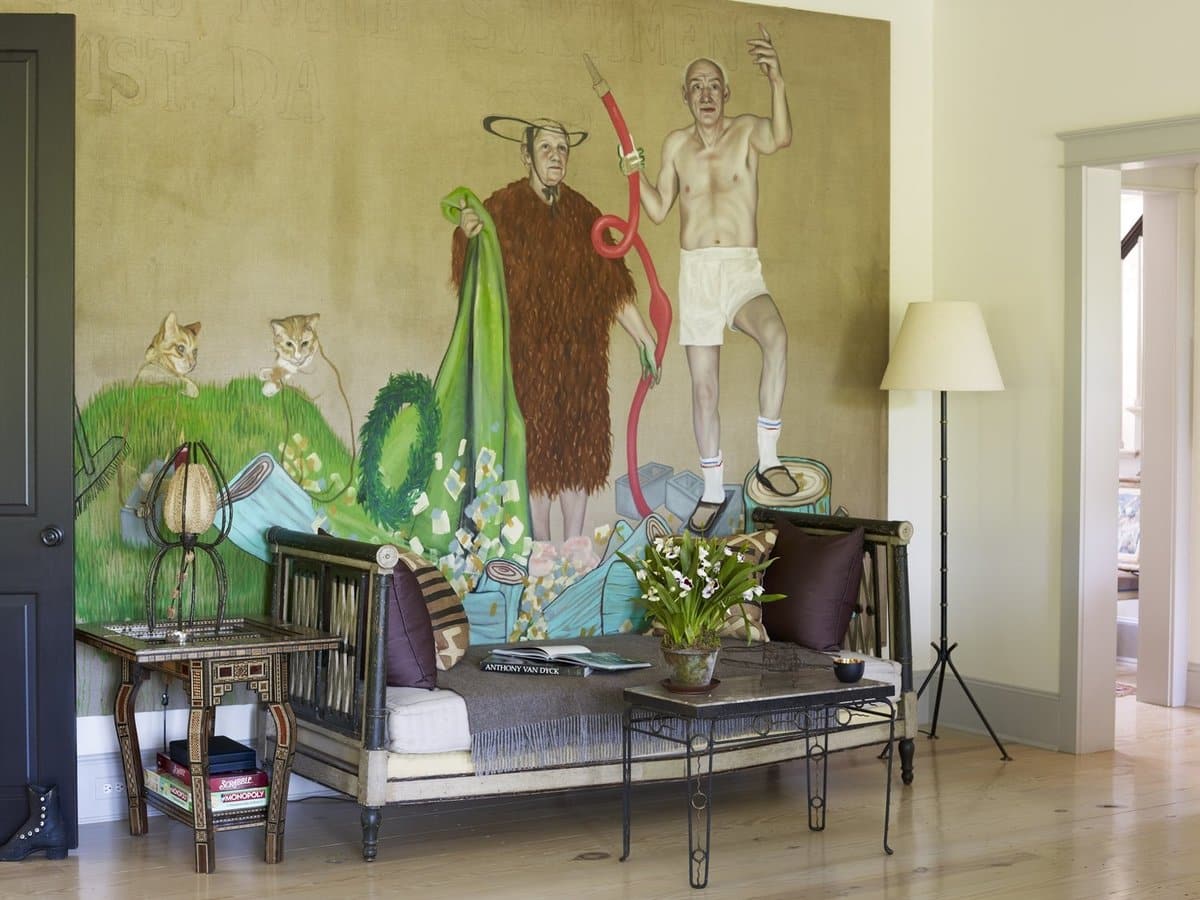 “The wall space was just screaming for a large work of art,” says Brian J. McCarthy of the living room in his Hudson Valley, New York, home. The interior designer often incorporates decorative wall treatments and finishes that can beautifully rule over a room.

In his own weekend retreat, McCarthy stretched a large canvas by German artist Kati Heck, titled Die Nachbarni-Der Fruhjahrsputz, across an expanse of the living room wall. Says McCarthy of the painting and its placement: “It was perfect.” 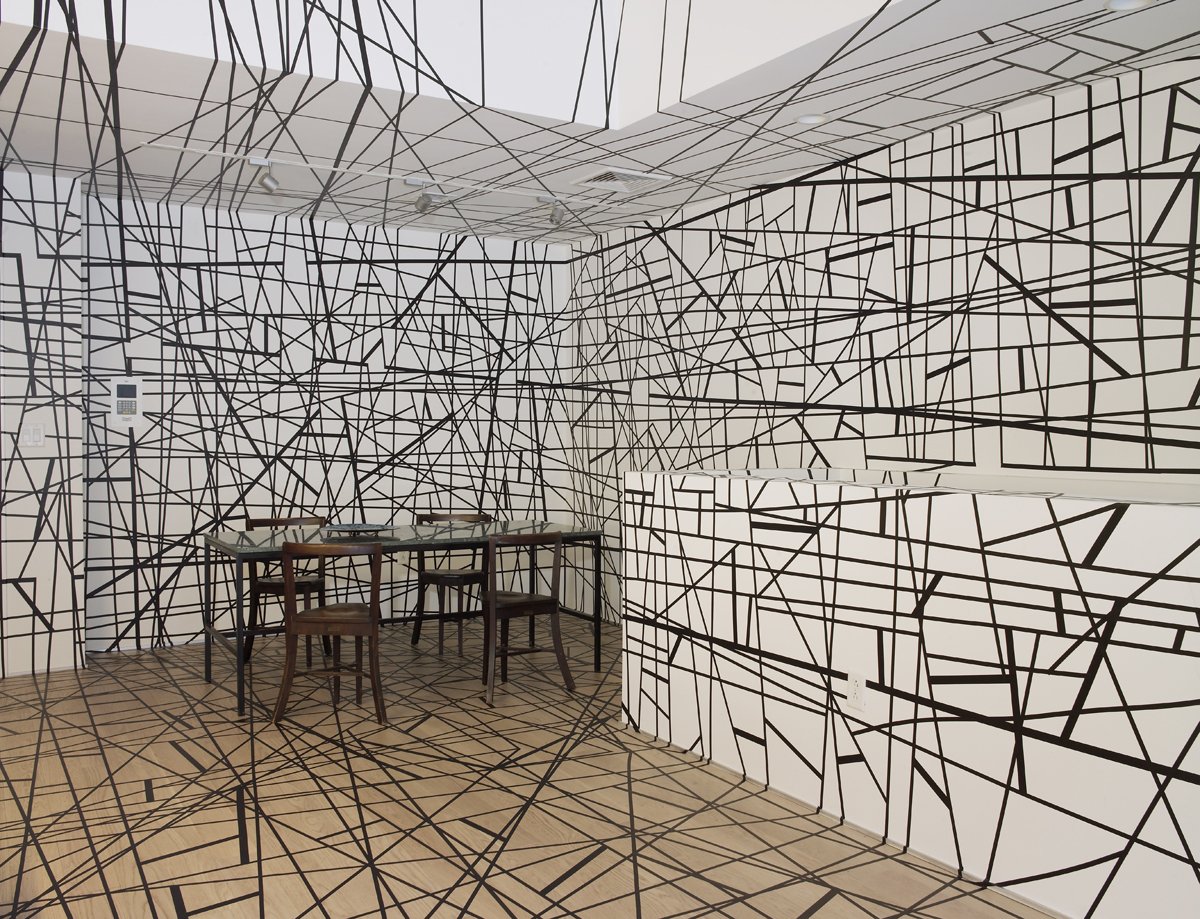 What’s black and white and striped all over? Look no further than the duplex apartment Doug Meyer designed for an old college friend and her husband. The couple’s primary directive was to avoid color. Meyer honored their edict — and then some.

In the dining room, he used industrial-grade tape to make lines from the wall to the ceiling to the floor. Next, “weeks were spent going in and cutting out sections and adding new lines in other directions,” Meyer says. “It’s like painting a picture. You stand back and look to see where tension and interest are needed.”

The design calls his unusual wall treatments “perfect foils for art and furniture.” 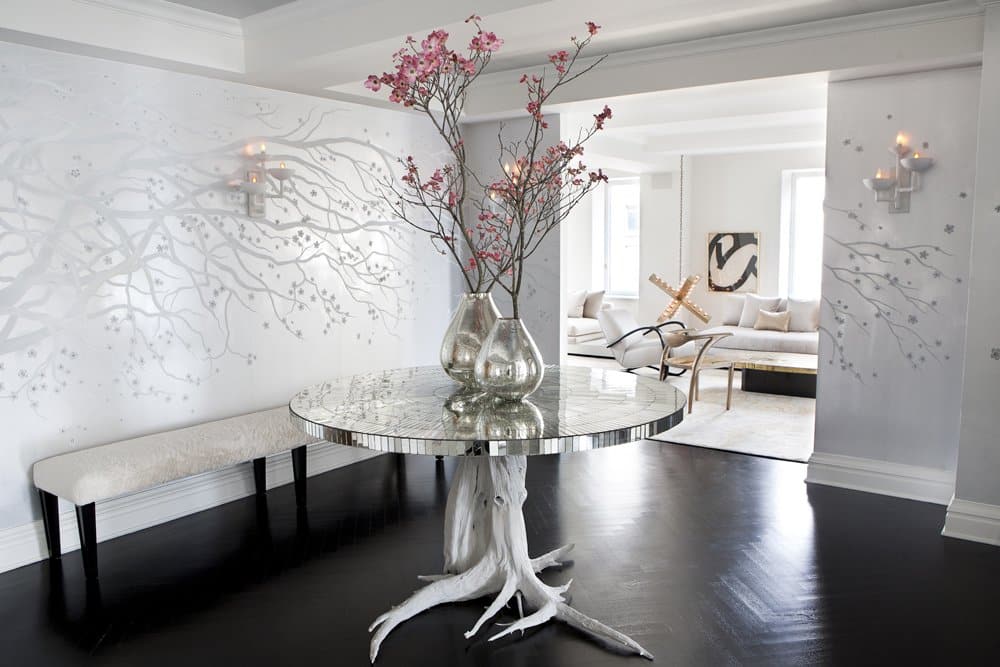 New York City–based designer Kelly Behun finds that an entryway is often the best place to set the mood of a home. For a client’s Park Avenue apartment, Behun sought “a sense of motion and serenity. Anyone living in a big city can relate to that feeling of your head still spinning when you get home and craving a sense of tranquility.”

Her solution? A hand-painted mural on silver-leaf paper. “The idea was to make it look like a single Japanese maple had wrapped around the entire foyer,” Behun says. “I wanted it to feel as though a wind had blown the branches and leaves in a clockwise motion around the room.”

The Room as Canvas 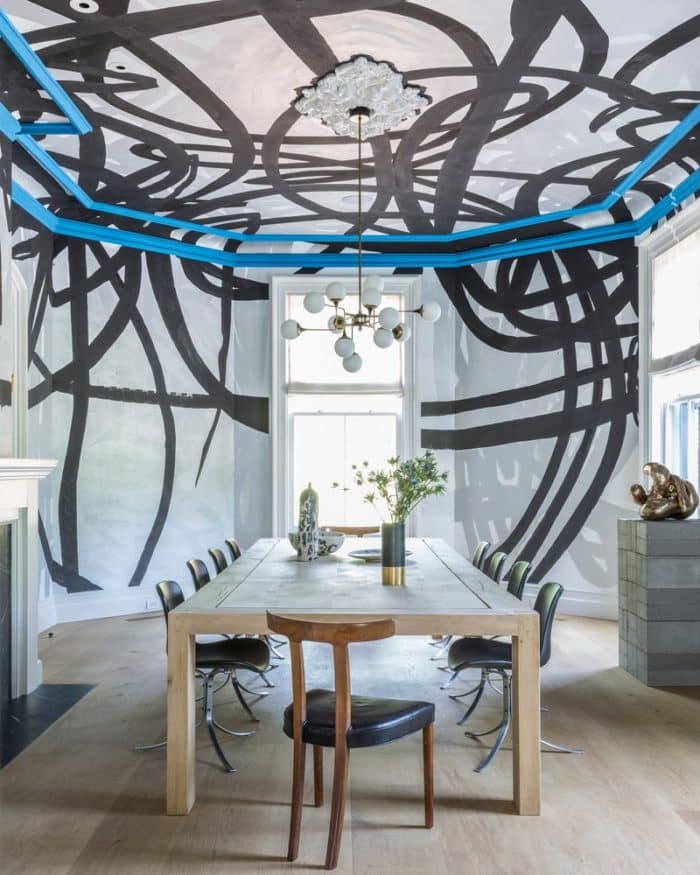 As a passionate traveler, interior designer Sara Story’s work often has a global influence. For her family’s 1870s Victorian country house near the Hudson River in New York, she gave the dining room a highly modern spin.

An installation by Austrian artist Otto Zitko is scrawled over the walls and ceiling. “I saw Zitko’s work in Vienna and fell in love with it,” Story says. “The room becomes the canvas, which makes it so interesting. It gives off a lot of personality, too!” 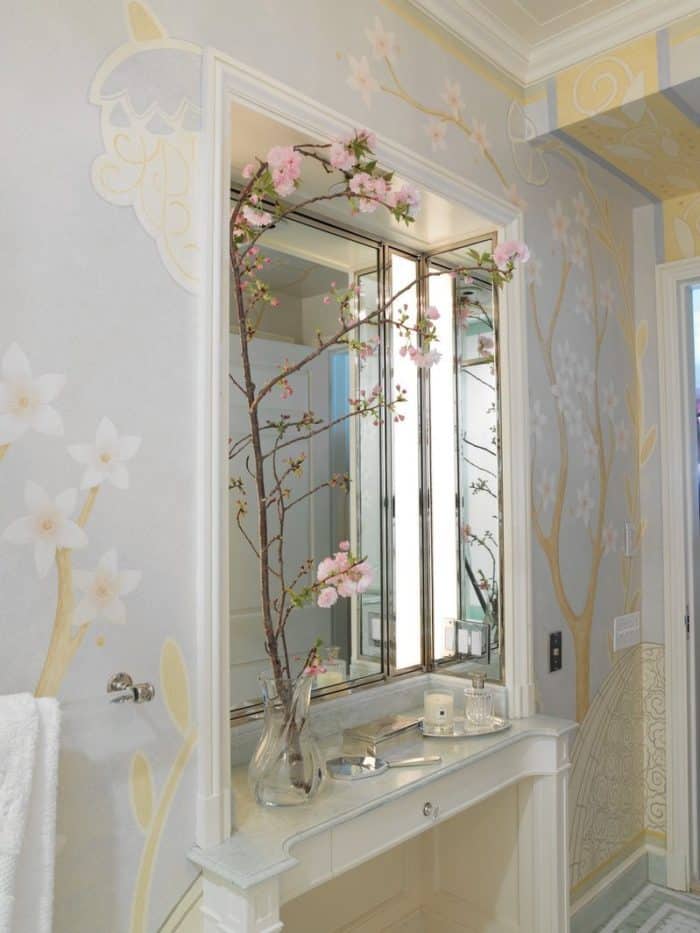 For an apartment on New York’s Upper East Side, Brian J. McCarthy incorporated luxe wall treatments in the powder room to glorious effect. “The powder room was stenciled with moon-gold and inlaid with mother-of-pearl and abalone,” McCarthy explains. The gilt accents light up the entire room with the help of a hanging light fixture and golden touches on furnishings throughout the space. 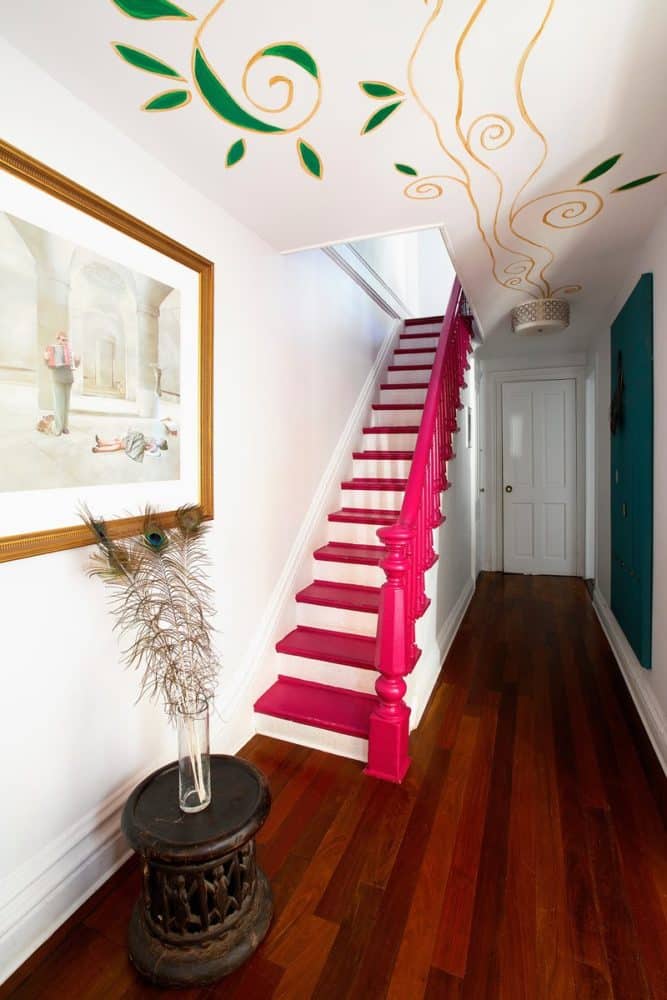 Inspiration came from far and wide for a Carroll Gardens, Brooklyn, home designed by Fawn Galli. She imbued the townhouse with an Alice in Wonderland sensibility, brought to reality with vintage furnishings, bright colors and quirky decorative objects.

In the entry hall, Galli added yellow and green curlicues that undulate out from the drum-shaped ceiling light. It’s just the right topsy-turvy flourish to set the tone for what lies inside the rest of the residence. 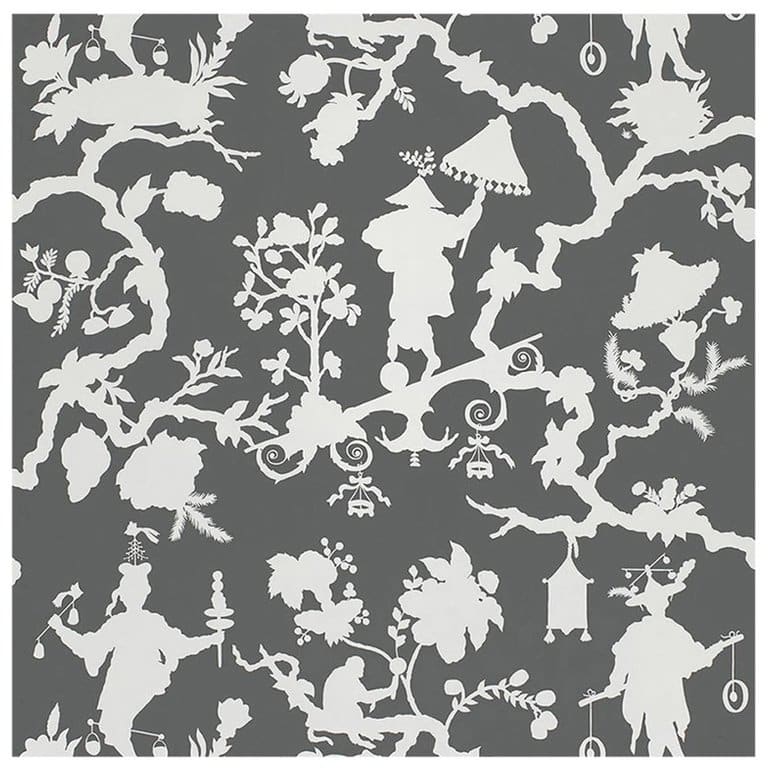