H 47 in. W 17.88 in. D 1.25 in.
Japan Scroll Painting, Meiji Period
Located in Pasadena, CA
This is a wonderful example of a Meiji Period screen painting of foxes in a landscape. The Inari Fox is considered to be sacred in Japanese culture where the foxes is not only cunnin...
Category 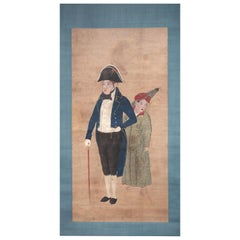 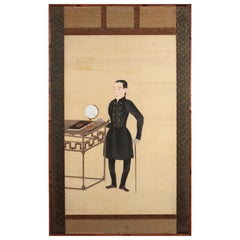 H 40.75 in. W 25.4 in. D 0.79 in.
Two Antique Japanese Hanging Scroll Paintings
Located in Atlanta, GA
Two Japanese scroll painting depicts scenes from the Tale of Genji (Genji-E), from Edo period. These painting were purchased from Odewara Shoten in the Imperial Hotel of Tokyo in 196...
Category

H 48 in. W 17 in. D 0.1 in.
Big Japanese Tiger Hanging Scroll
By Japanese School
Located in Brescia, IT
Scroll painted with inks on vegetable paper of the Nanpin school or the Nagasaki school of the end of the Edo period. The most famous artist of the Nanpin school was Kishi Ganku, who...
Category

H 79.5 in. W 25.5 in. D 1 in.
Japanese Meiji Riverside Scroll Painting
Located in Chicago, IL
Although western painting was initially embraced during Japan’s Meiji period (1868-1912), artists brought on a revival of traditional painting styles as they sought to create a moder...
Category

H 74.3 in. W 16.19 in. D 0.04 in.
Japanese Hanging Scroll, Late 19th Century
Located in New York, NY
A Japanese hanging scroll or Kakejiku, circa 1890, depicting bamboo grass and a rabbit. In Japanese culture, the rabbit is a symbol of cleverness and self-devotion. Bamboo is a symbo...
Category

H 74 in. W 21.5 in. D 1 in.
Japanese Ink and Wash Scroll Painting by Watanabe Seitei
Located in Atlanta, GA
Watanabe Seitei, also known as Watanabe Shotei (1851–1918), was born in late Edo period. He was one of the earliest Japanese artists who visited and became well-known in the West. In...
Category

Large Japanese Scroll of a Tiger

H 86.5 in. W 46 in. D 1 in.
Antique Japanese Scroll of Peonies
Located in Hudson, NY
Edo period (first half of the 19th century) antique Japanese scroll of peonies. Signature and seal read: Baiitsu Yamamoto, (1783-1856). Yamamoto was the designated artist for a famil...
Category

H 88 in. W 63 in. D 1 in.
Hanging Scroll by Kamisaka Sekka, Japan
Located in Milano, IT
This painting represents a man waiting under a dark tree. The composition is extremely simple but suggestive. The artist, with few elements, can, in fact, create a vivid and dynamic ...
Category

H 78.75 in. W 18.9 in. D 0.4 in.
Japanese Scroll, Chikubu Shima ‘Chikubu Island’
Located in Hudson, NY
Chikubu is an island in Lake Biwa, Shiga prefecture. This painting depicts a tori gate leading to a temple, and in the background is Kyoto and the Higashiyama Hills. Mineral pigments...
Category

H 54.45 in. W 21.26 in. D 0.04 in.
Lovely 19th Tamazusa Kawabata Scroll Paintings Japan Artist Crane Painted
Located in Amsterdam, Noord Holland
Tamazusa Kawabata 1842-1913 Japan painter. Kyoto student. His name is Takinosuke, Keitei in another issue, and Kei in his later years. At the age of eleven, he entered the gate of ...
Category

H 53 in. W 25.25 in. D 1 in.
Autumn landscape 20th Century Scroll Painting Japan Artist Kawagoe Tamado
Located in Amsterdam, Noord Holland
It is a high-class craft of the work drawn by Kawagoe Tamado as you can see. It is the "late autumn in the highlands" where you can feel the taste of autumn, and it is a work in wh...
Category

H 77.37 in. W 25.79 in. D 0.04 in.
Lovely 20th Tokuriki Tomiyoshiro Scroll Paintings Japan Artist Crane Painted
Located in Amsterdam, Noord Holland
Has been is the work produced by Tokuriki Tomiyoshiro known as woodblock artist, such as you can see. It is a work that makes you feel a unique calmness and taste, is very attractiv...
Category

H 64.38 in. W 16.93 in. D 0.04 in.
Lovely circa 1900 Scroll Paintings Japan Artist Shinsu Signed Crane in Landscape
Located in Amsterdam, Noord Holland
Jodo Shinshu Nishi Honganji 1862 years now, born as the second son of Okayama Prefecture Kasaoka Joshinji priest Akemi Tsuda. His real name is Akirashirube. He was a painter and a...
Category

H 75.01 in. W 20.28 in. D 0.04 in.
Kawai Gyokudō Nihonga Scene Early 20th Century Scroll Painting Japan Artist
Located in Amsterdam, Noord Holland
It is a high-quality craft of the work drawn by Kawai Gyokudo as you can see. It creates a texture that makes you feel a refreshing breeze, and it is a tasty work that is carefully...
Category

H 50.4 in. W 24.41 in. D 0.04 in.
Actors in Dance / Theatre Scene 20th Century Scroll Painting Japan Artist
Located in Amsterdam, Noord Holland
It is a work of 2 scrolls figure in a Theatre/Dance Noh style. it is a very tasty work combined with the hymns spelled at the top. ¦ Silk books and handwriting. ¦ State There ...
Category

H 74.02 in. W 15.95 in. D 0.04 in.
Lovely Early 20th Century Scroll Paintings Japan Meiji Artist Shimazu Racoons
Located in Amsterdam, Noord Holland
Autumn Harvest moon, feel the mystical flavor of autumn, harvesting is the work of the raccoon that is illuminated by the moonlight. "Huashan Shimazu" 1894 (1890) born in Kyoto. ...
Category

How Much is a Japanese Scrolls Painting?

The average selling price for a Japanese scrolls painting at 1stDibs is $1,069, while they’re typically $55 on the low end and $85,852 for the highest priced.

Finding the Right Paintings and Screens for You

Traditional Asian paintings were often created on scrolls and folding screens. Artisans made screens that could be folded up or spread out by connecting several panels using hinges. Today, antique Asian folding screens and paintings are sophisticated decorative accents that can serve as makeshift partitions to ensure privacy.

The original folding screens were created by Chinese artists. The earliest record of screens comes from the 2nd century B.C., and surviving examples date back to the Ming dynasty. Chinese painting utilizes many of the same tools as calligraphy — these screens were crafted from wood with painted panels featuring striking art or calligraphy that told cultural stories or represented nature and life in the area.

The practice was introduced to Japan, where paintings for screens were made on paper and silk, in the 8th century. These paintings frequently feature subjects such as landscapes, animals, flowers and Buddhist religious themes. Along with screens for tea ceremonies and dance backgrounds, there were screens for use in Shinto and Buddhist temples.

In the 17th century, screens began to be imported to Europe where their popularity grew. Coco Chanel famously collected Coromandel folding screens.

Traditional Asian paintings can make a tasteful addition to any wall, and screens can be used as decoration or, in the case of larger iterations, as an aesthetic way to divide a large room. Browse the selection of antique Asian paintings and screens from a variety of styles and eras on 1stDibs.

For 25 years, gallerist Betsy Nathan has leveraged her keen eye and key connections to bring a unique selection of rare finds to the market.

These spaces exemplify how Eastern elements elevate a home's decor.