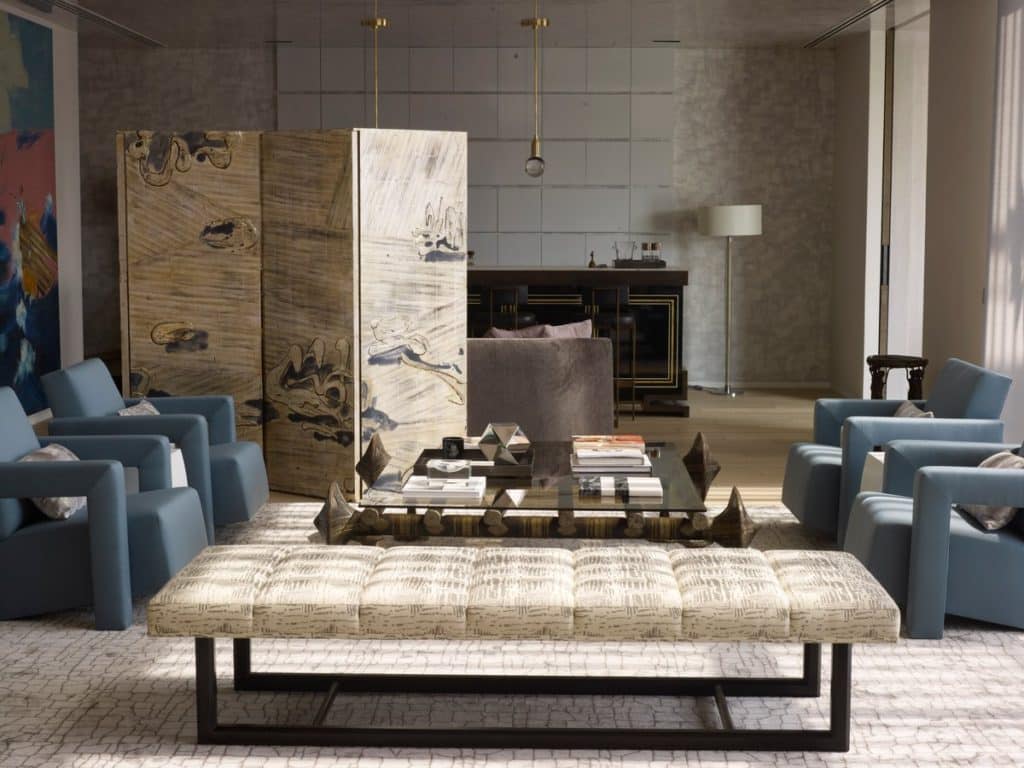 This Sara Story–designed penthouse in the Tanglin neighborhood of Singapore features a silver-leaf screen that was commissioned from artist Nancy Lorenz; the crocodile hand-knotted silk area rug is by Beauvais. Photo by Robert McLeod 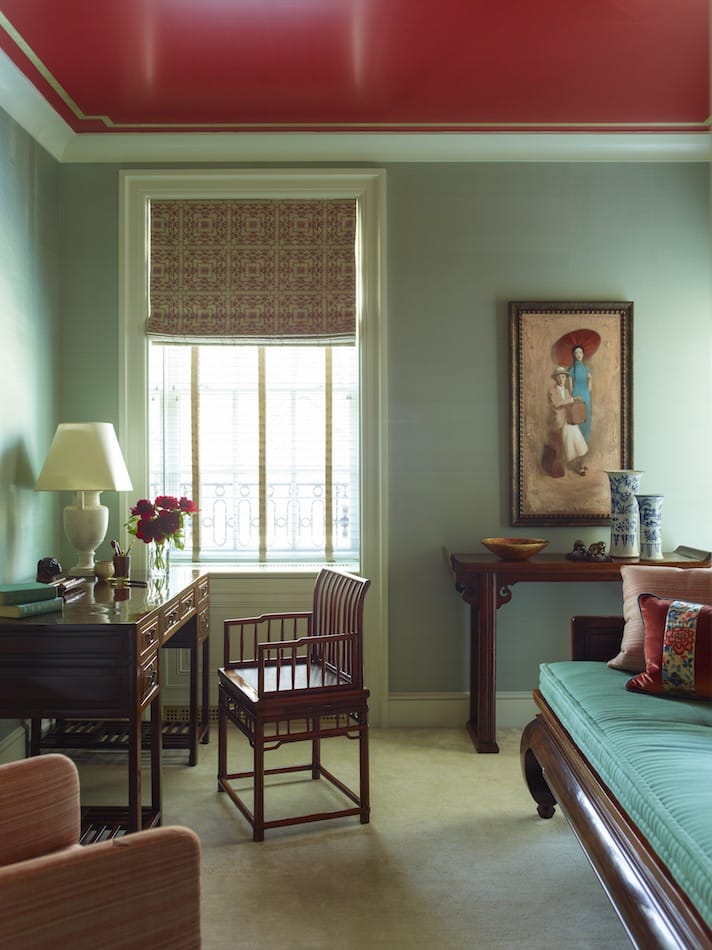 For this duplex maisonette in Manhattan, Peter Pennoyer conceived the residence’s guest bedroom as an homage to the family’s Asian roots, deploying exclusively Chinese furniture in the space and lacquering the ceiling a bright red. Photo by by Eric Piasecki/OTTO 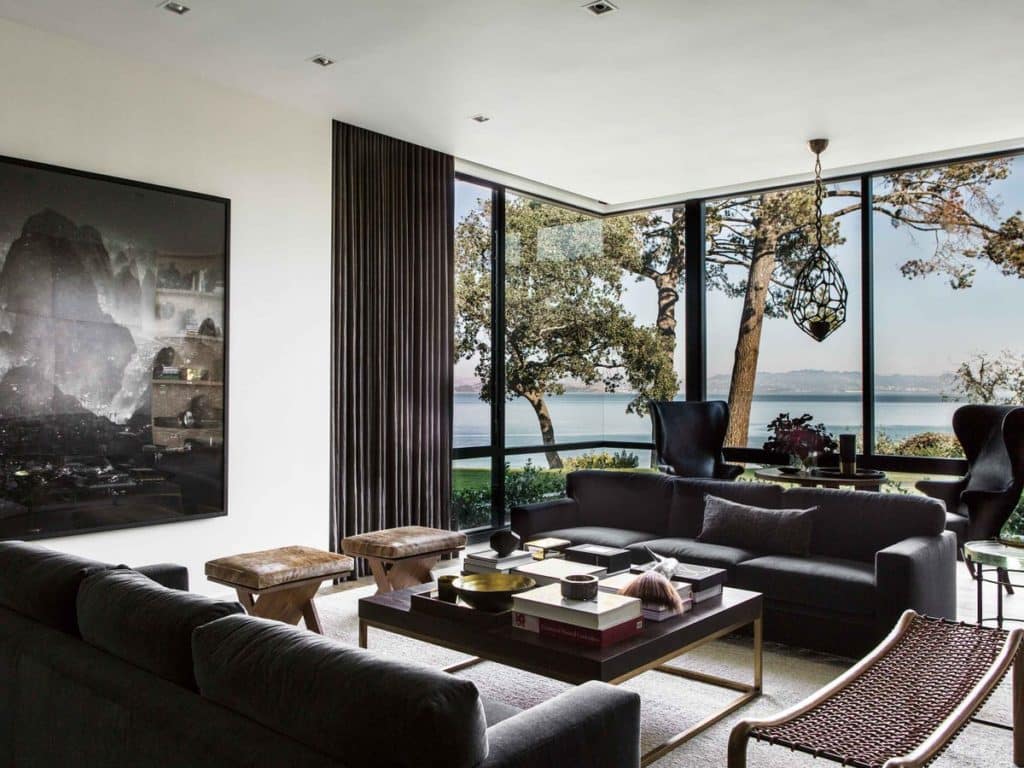 Nicole Hollis and Brooks Walker collaborated on this home in California’s Marin County for clients who were formerly based in Hong Kong. The living room features a pair of Jean-Michel Frank sofas and a custom coffee table by Hollis. The homeowners collect contemporary Asian art, and the wall work here is Wintery Forest, 2014, by Yang Yongliang. Photo by Laure Joliet 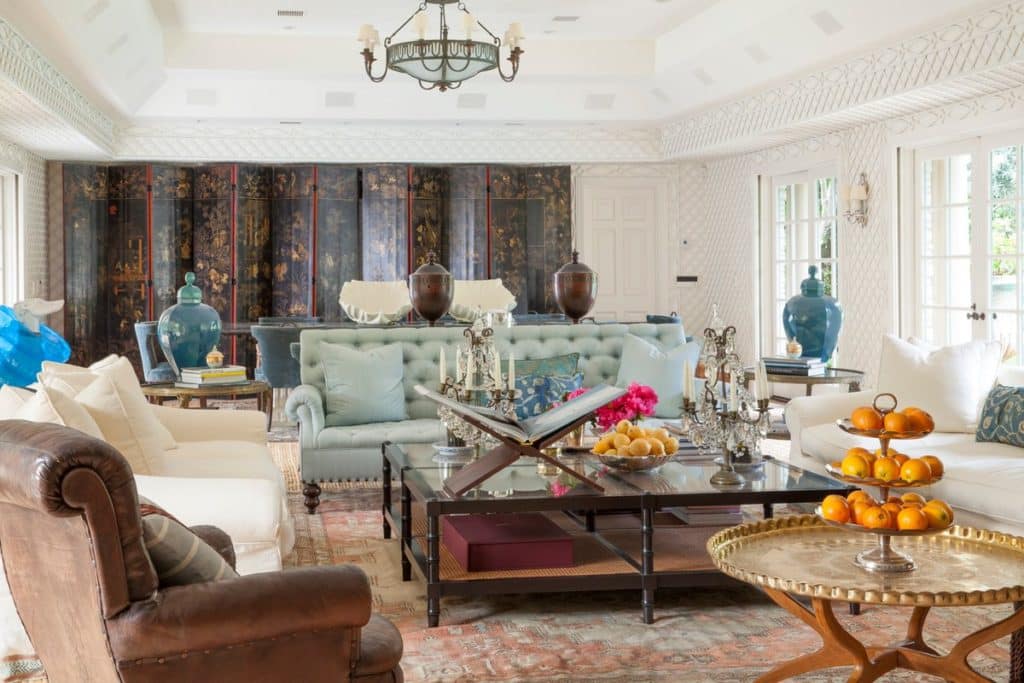 Peter Dunham updated this pool house and screening room, which once belonged to Merv Griffin. “The first piece we purchased was the huge 18th-century Chinese screen that retracts to reveal the projector,” Dunham says. “It fit to within an inch and set the look of the room, which we treillaged and then layered for a California take on English garden rooms.” Photo by Karyn R. Millet 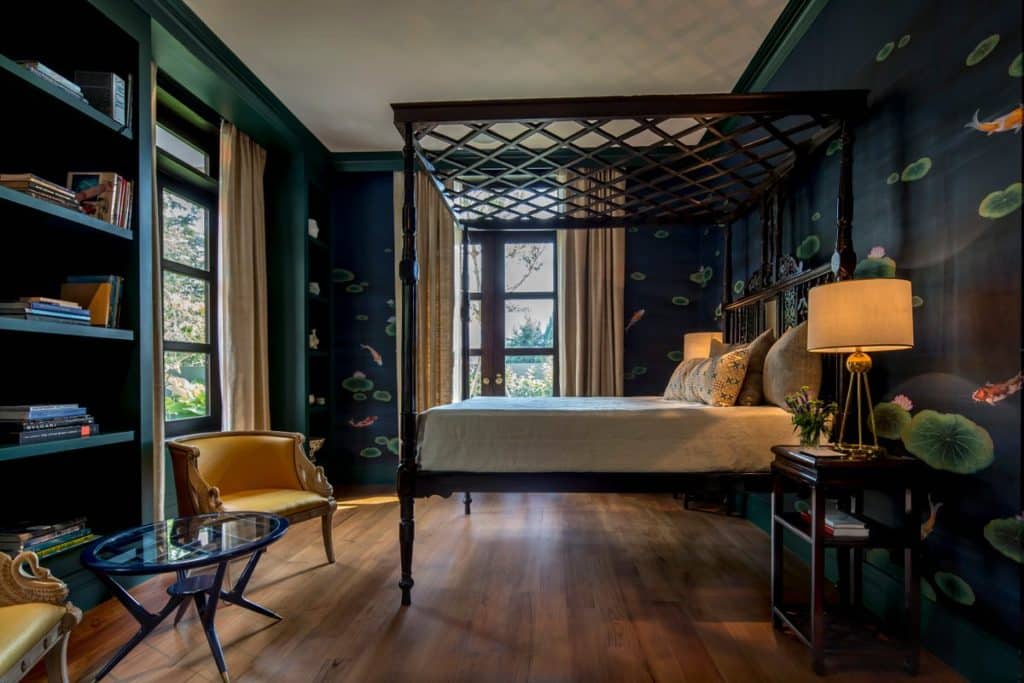 Gracie wallpaper, hand-painted with koi and lily pads, lends an air of fantasy to this Sara Story–designed guest bedroom in the Bin Tong Park neighborhood of Singapore, where a carved four-poster bed is flanked by a pair of 19th-century Chinese tea tables topped with brass tripod lamps by Remains Lighting. Photo by Masano Kawana 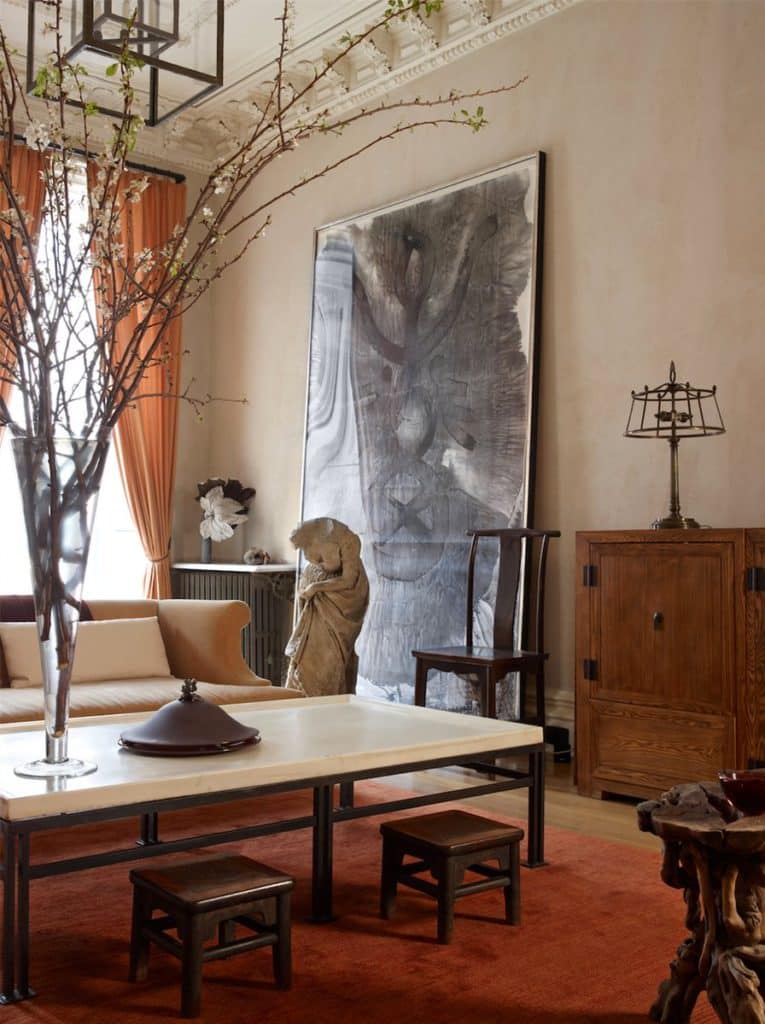 The living room of Kathryn Scott’s historic Brooklyn townhouse features an ink artwork by Gu Wenda, along with his video chair. The space also includes fragment of a marble statue. Photo by Ellen McDermott 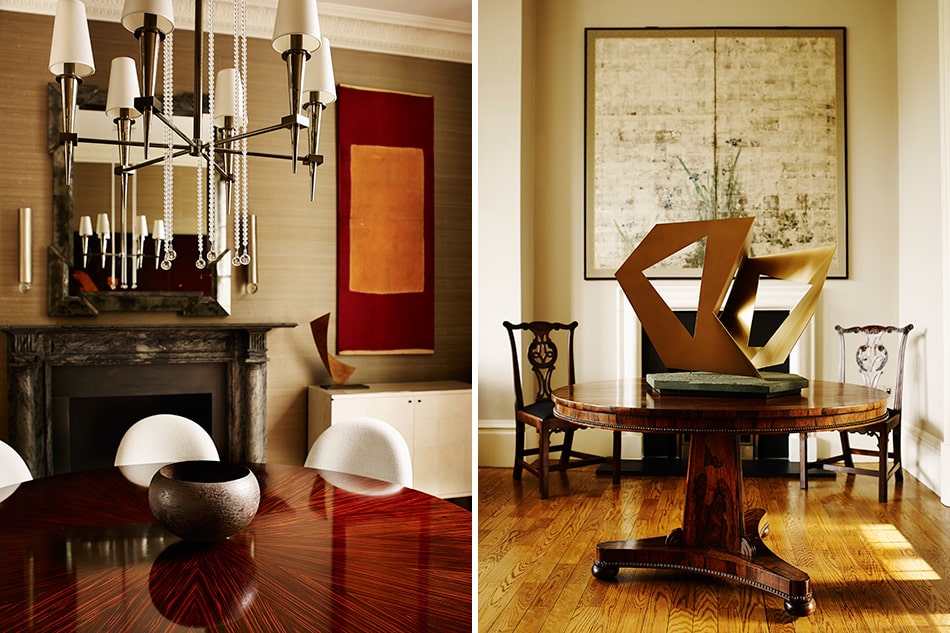 Left: In this London home, Douglas Mackie hung a 19th-century silk Indonesian ceremonial shawl called a lawon in the dining room, whose furnishings are otherwise of his own design. Right: In the entrance to the library, an 18th-century English table and chairs from Jamb sit in front of a Japanese screen of the same period. Photos by Gary Hamill 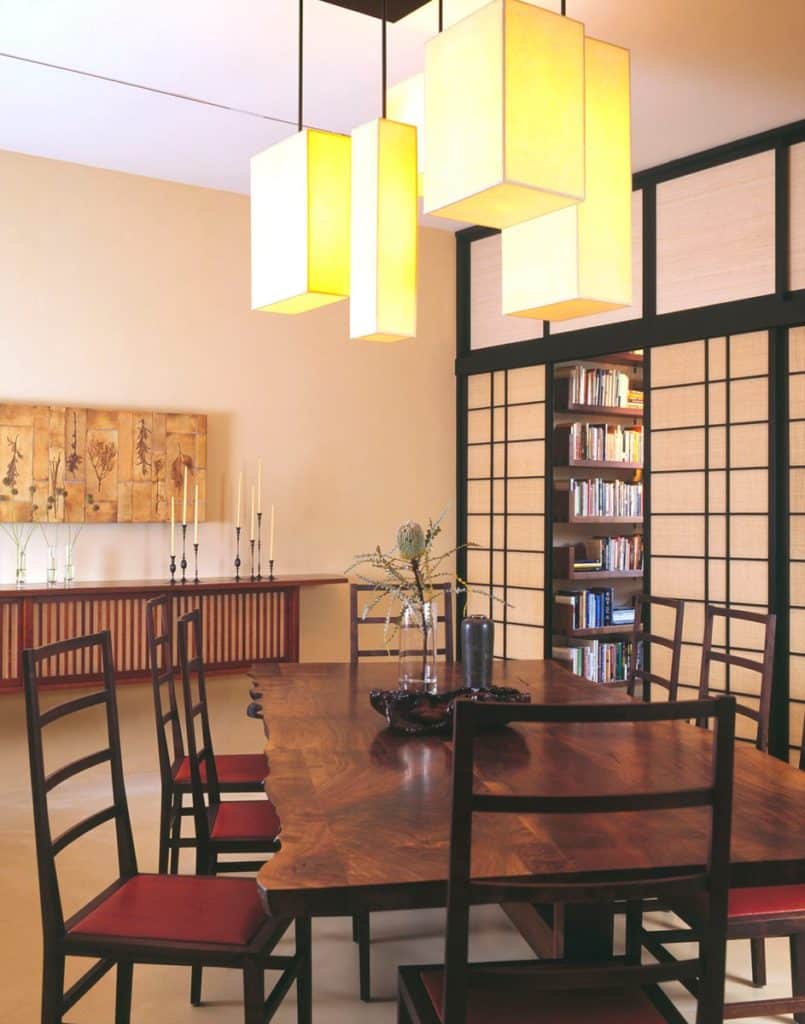 For this Manhattan loft, Amy Lau Design collaborated with master artisans and accomplished artists to create a synthesis of modern American design with a sensibility toward materials more commonly associated with an Asian tradition of craft. Photo by Hulya Kolabas 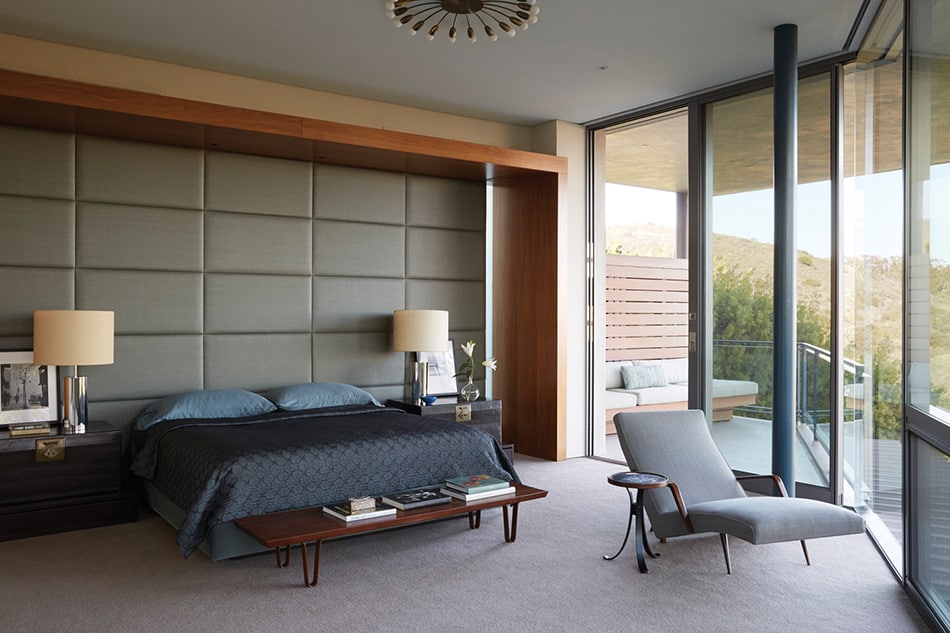 In the master bedroom of a Pacific Palisades, California, home by Studio William Hefner, custom wall panels are covered in Rose Tarlow fabric. A pair of mid-18th-century Chinese trunks topped with vintage steel lamps flank the bed, and an Edward Wormley bench sits at its foot. Photo by Roger Davies 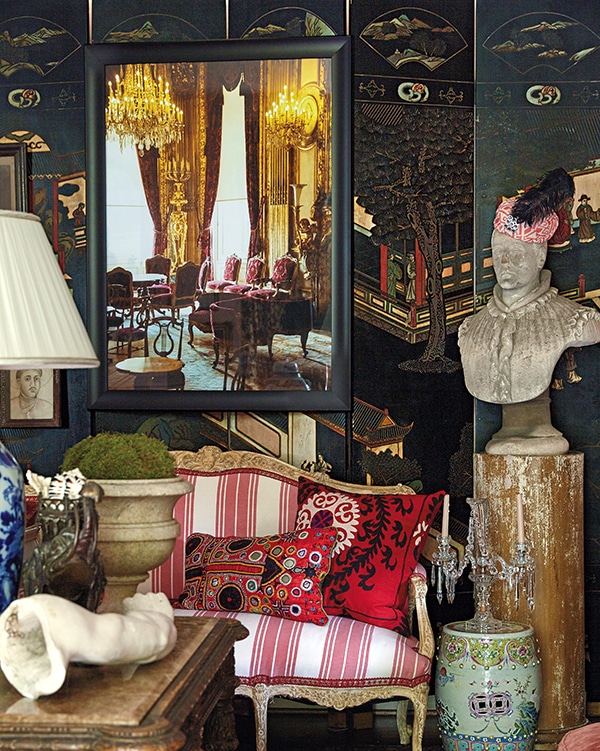 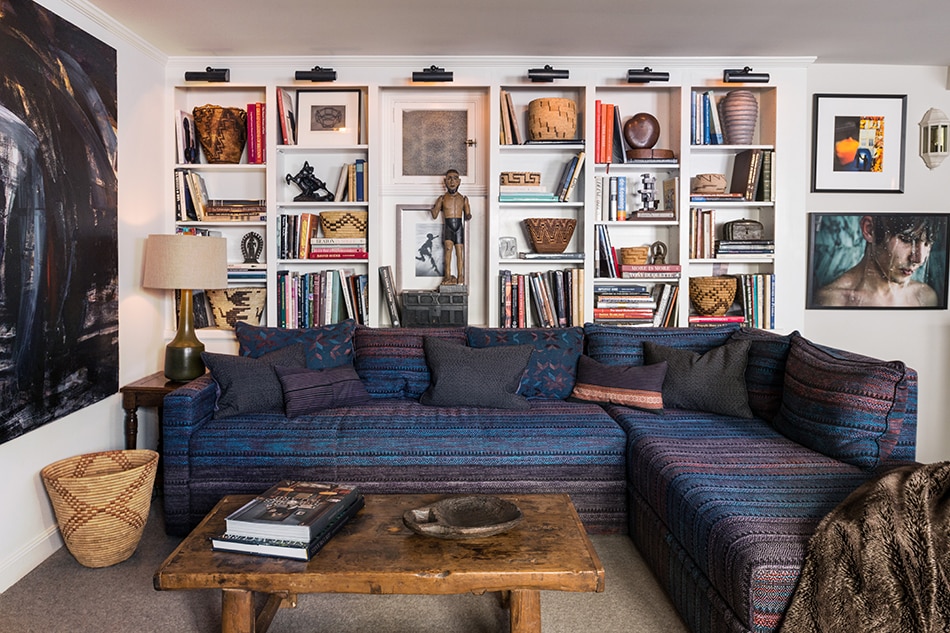 In the Seattle home of Tim Pfeiffer, cofounder of architecture firm Hoedemaker Pfeiffer, a custom sofa in the den is paired with a vintage Chinese coffee table. Photo by Andrew Giammarco 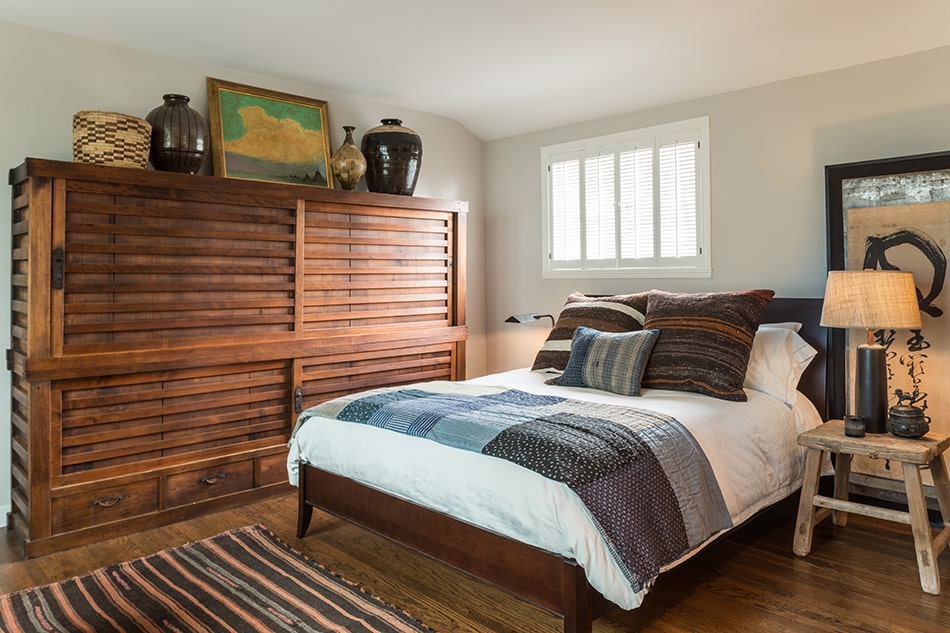 A vintage isho dansu, a Japanese clothing chest, features prominently in the design of Pfeiffer’s guest room, which also includes a Turkish rug and a rustic Chinese yumu-wood stool topped with a vintage Martz table lamp. Photo by Andrew Giammarco 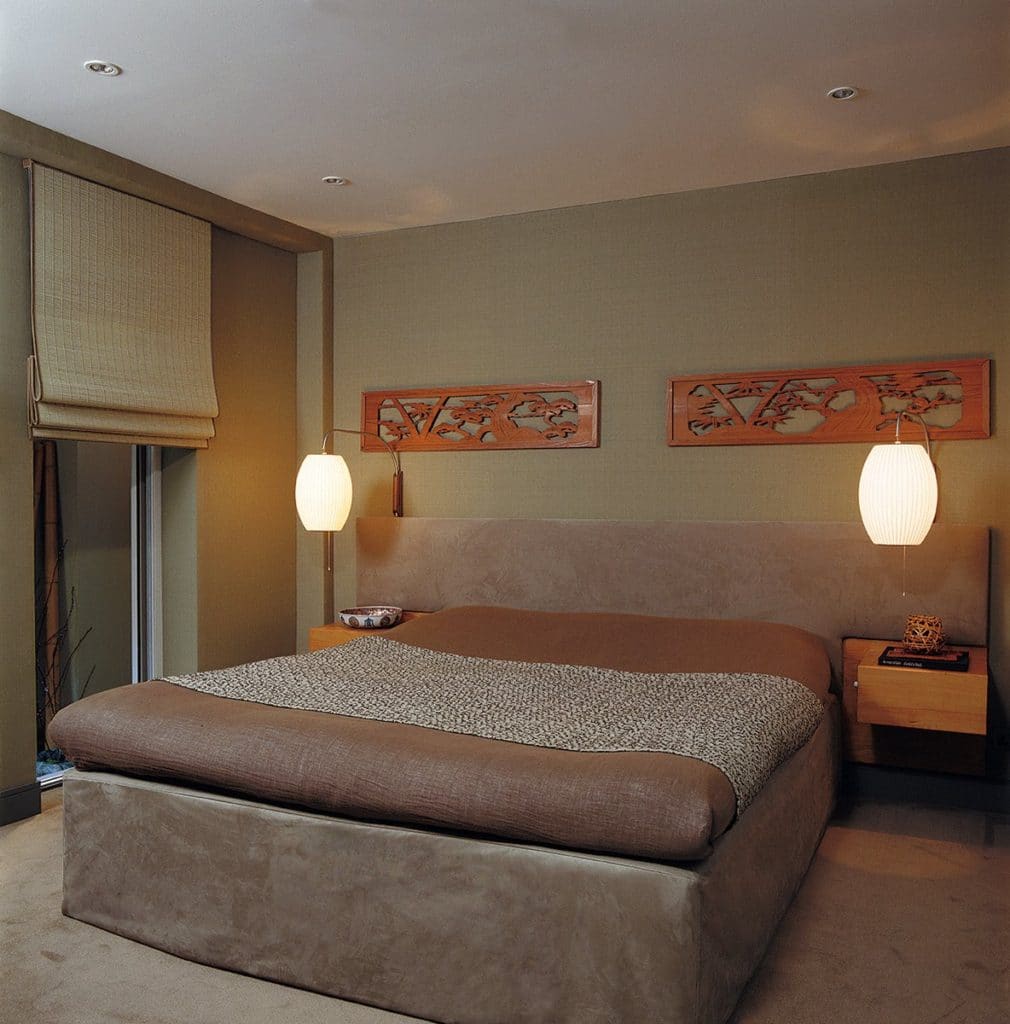 A pair of carved wood panels are mounted above paper-lantern wall lamps in this minimalist London bedroom by Emma Burns of Sibyl Colefax & John Fowler. Photo courtesy of Colefax & Fowler. 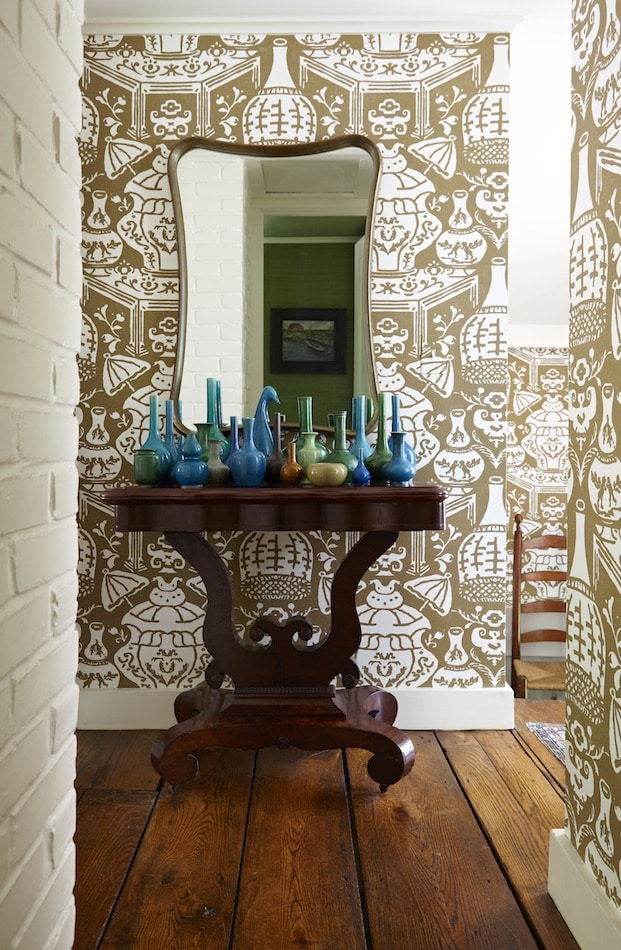 In designer Philip Gorrivan’s 1840 country home in Washington, Connecticut, his collection of Edo-period vases is displayed on an American Empire-style console in the hallway. The wall covering is by Clarence House. Photo by Joshua McHugh 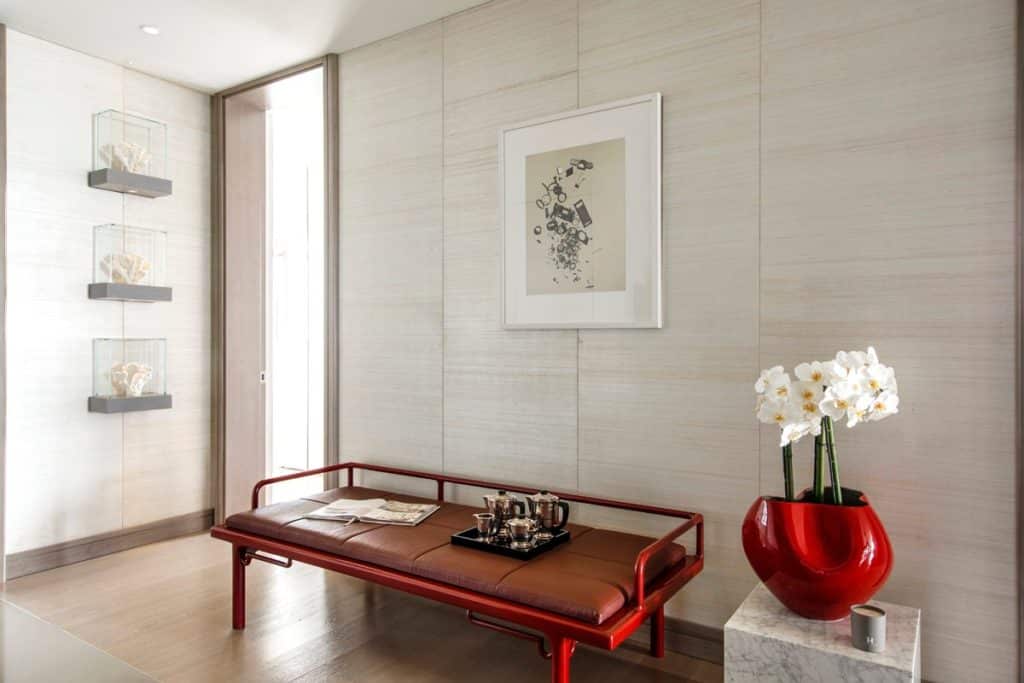 This serene sitting area in a Kelly Hoppen–designed home in China is punctuated by a red lacquered daybed and sculptural vase. Photo by Shenzhen Lv Feng Photography Ltd.