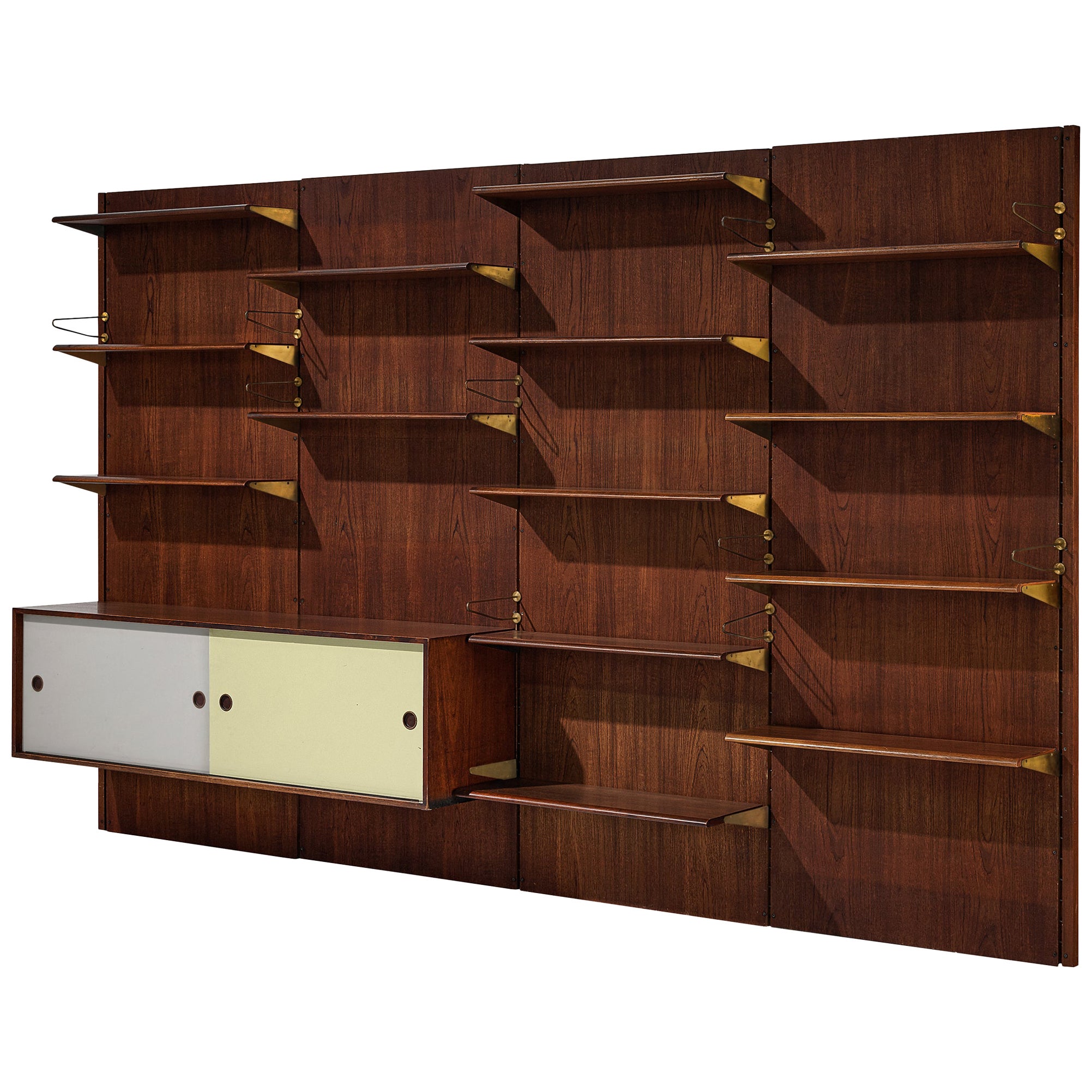 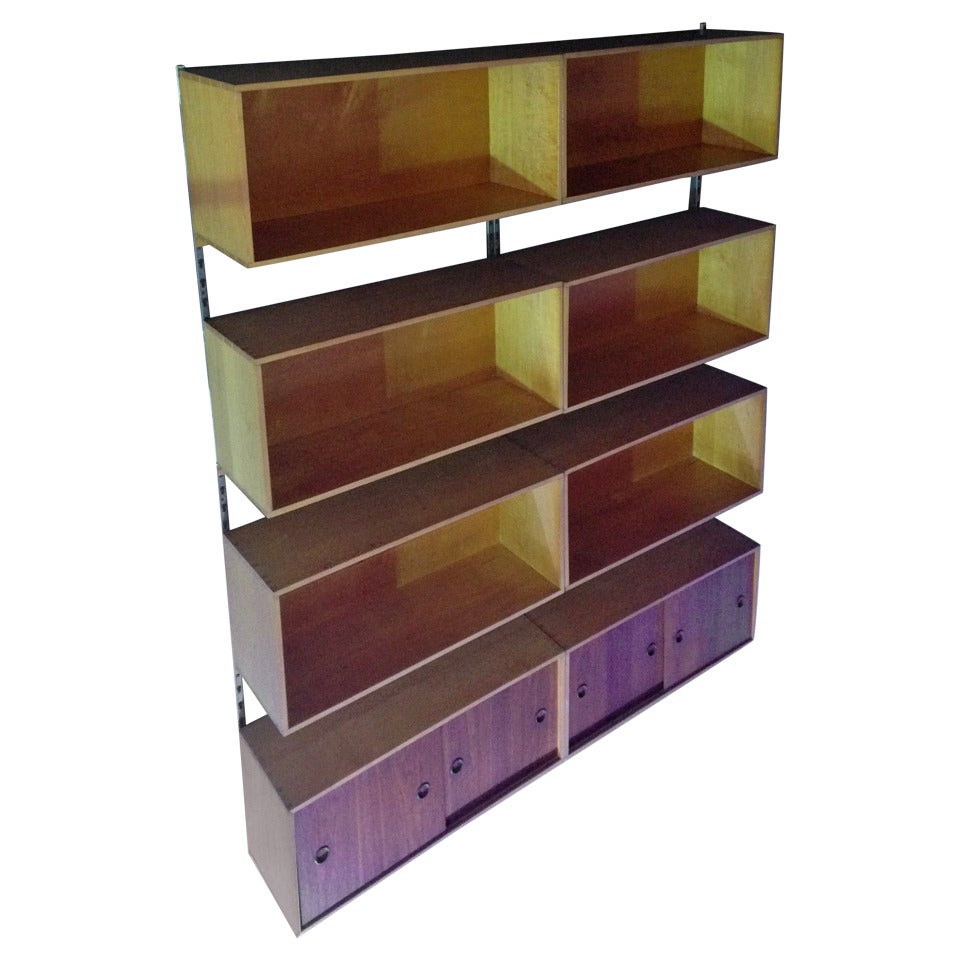 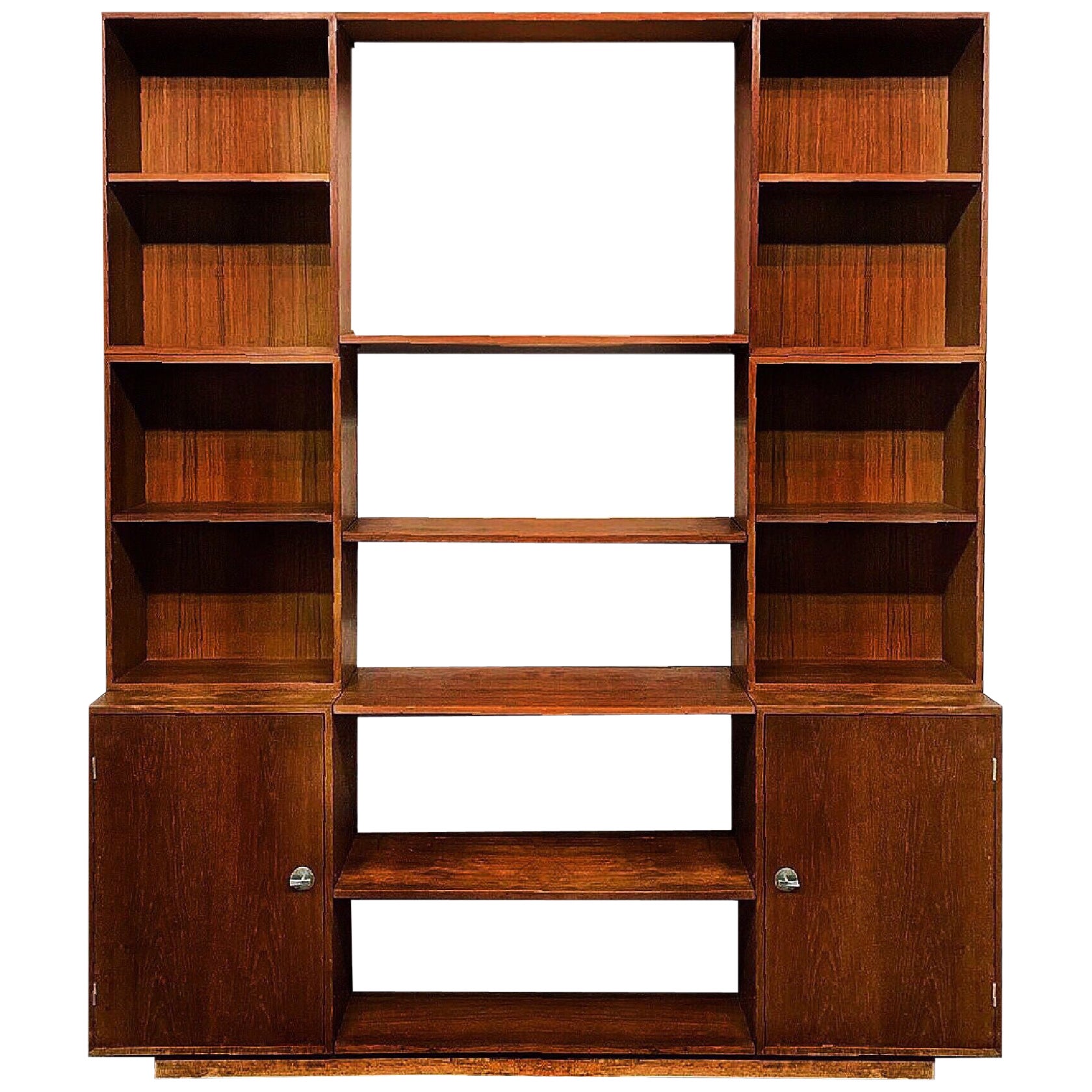 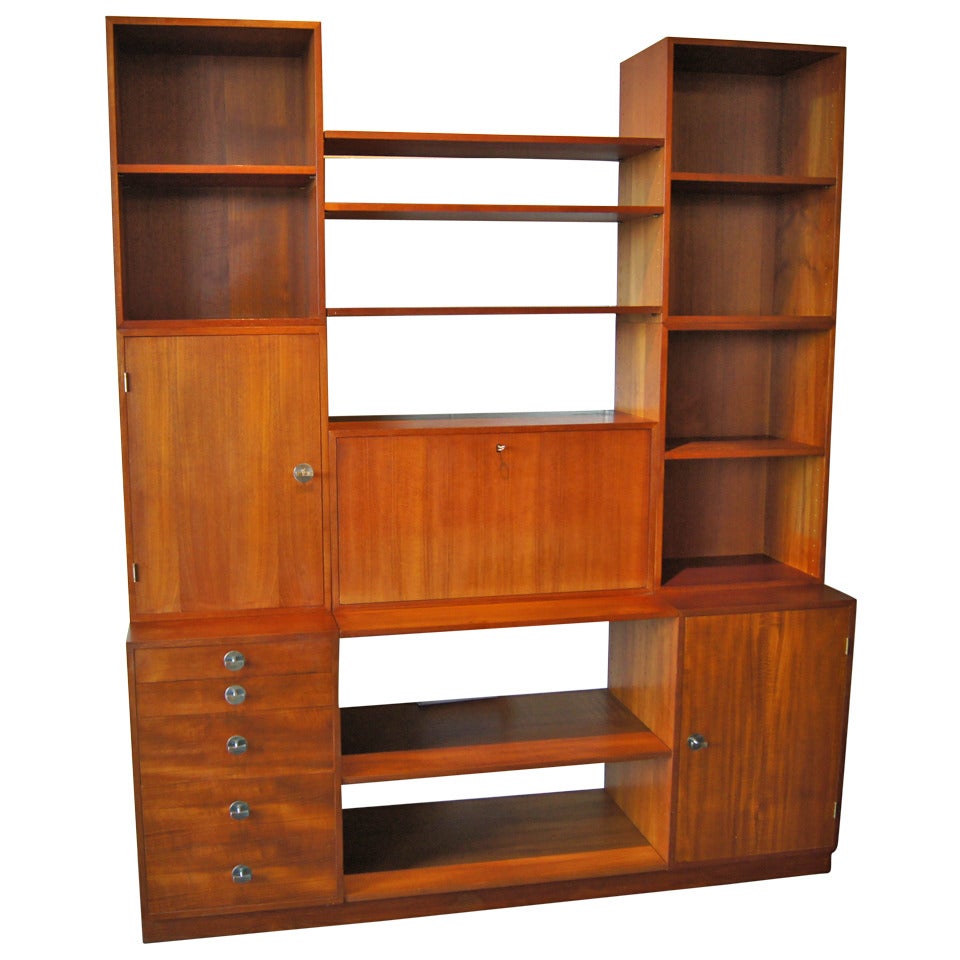 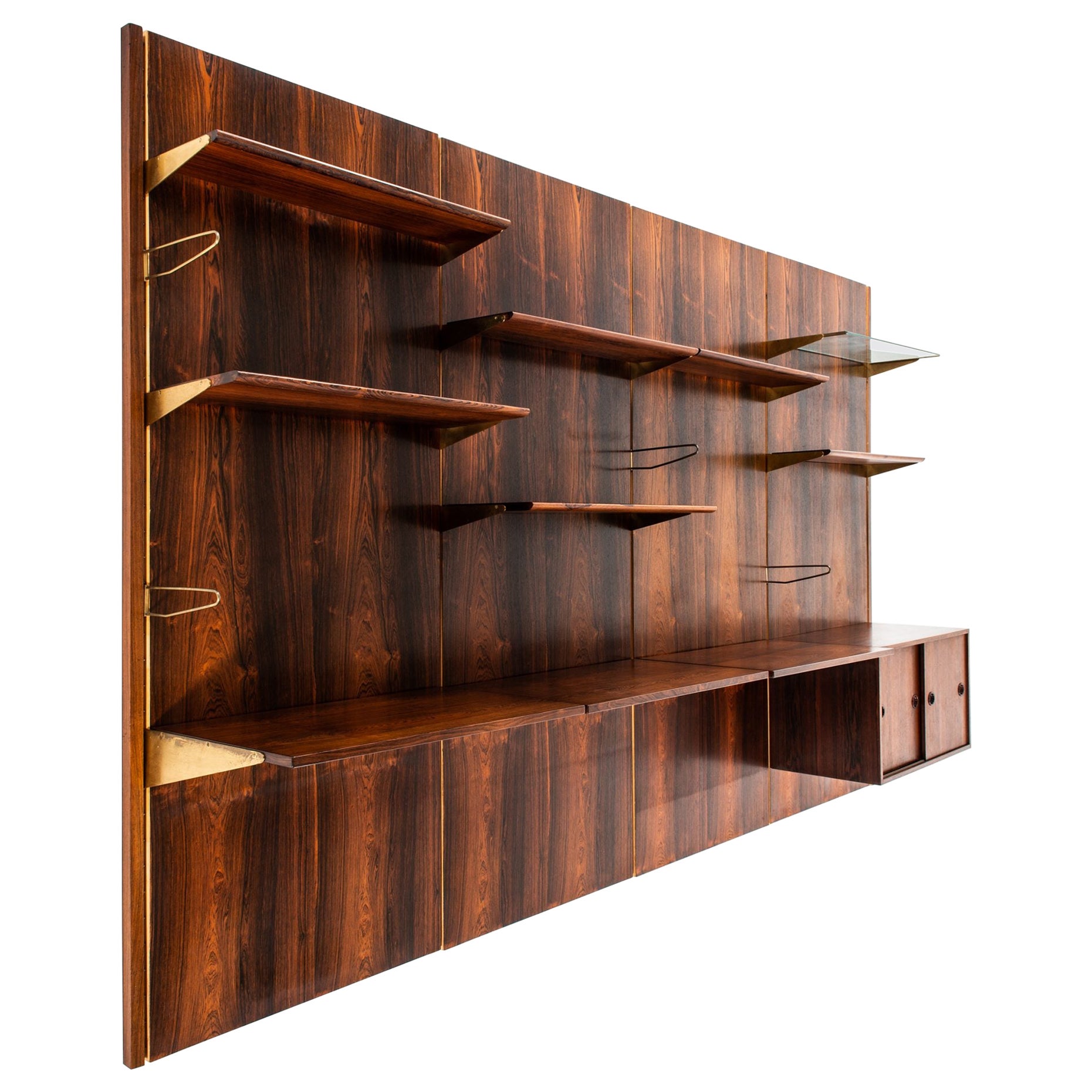 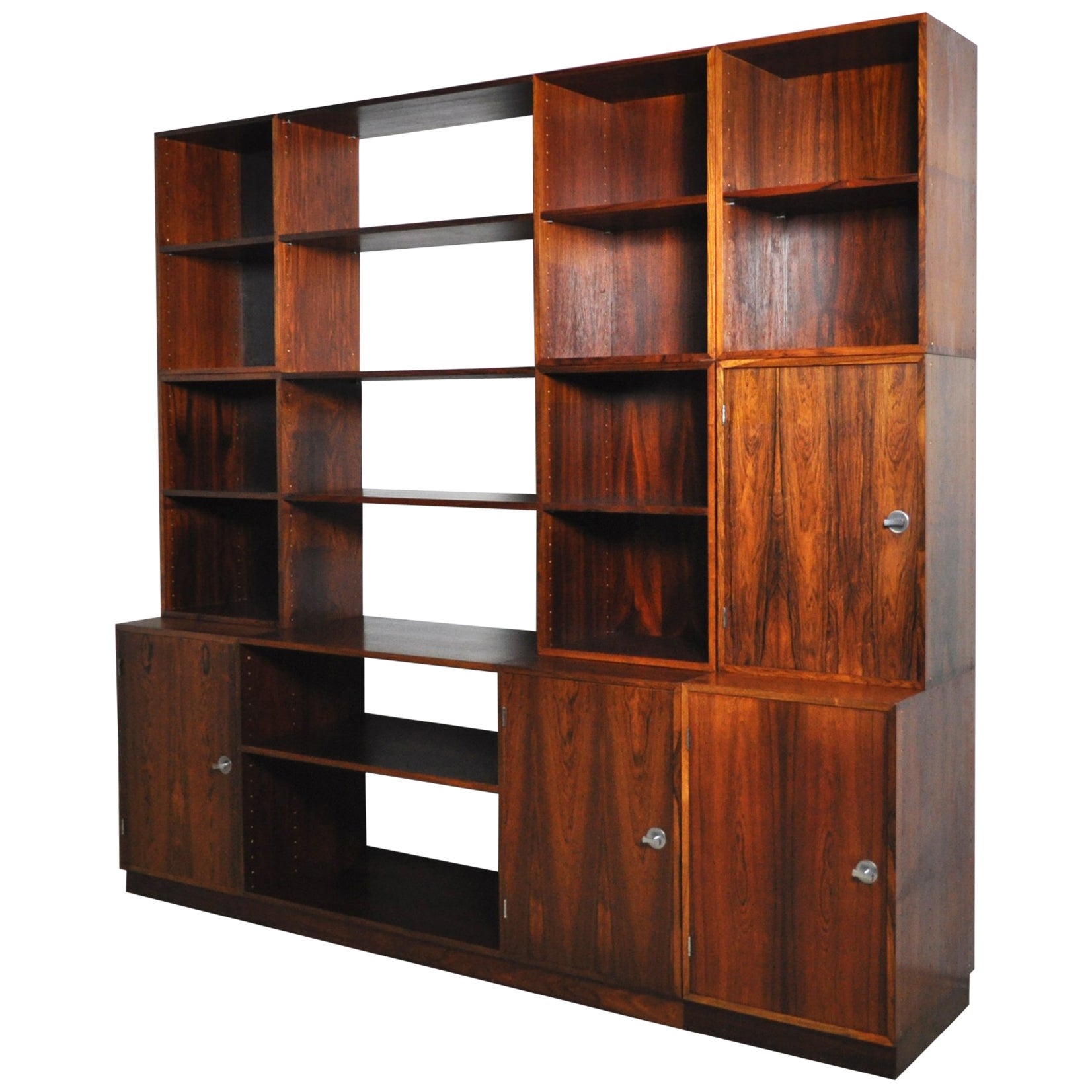 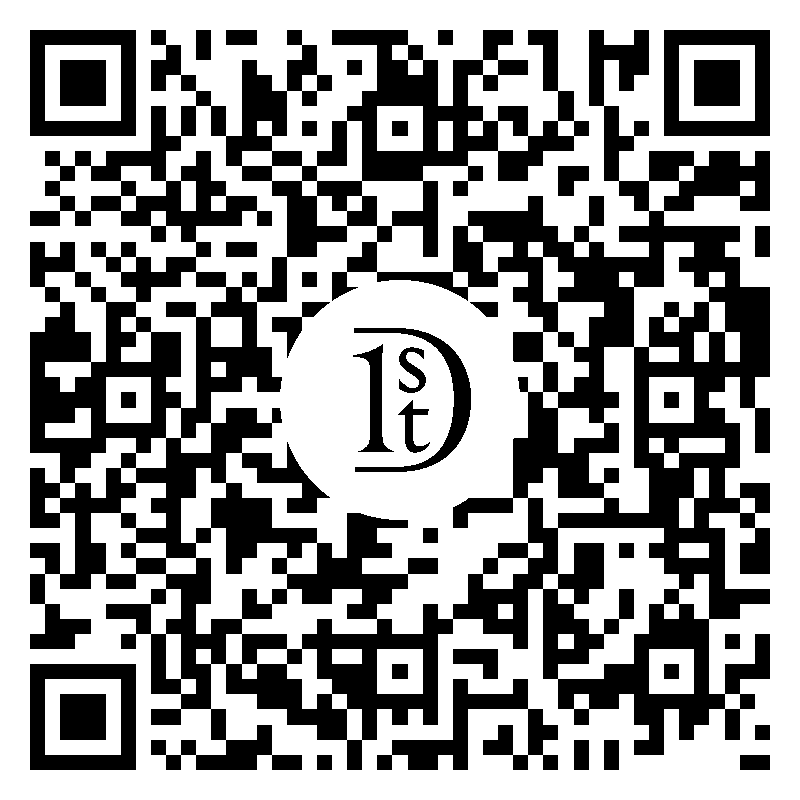 Finn Juhl for Bovirke, wall unit, model 'BO71', teak, pine, brass, Denmark, 1950s Large open wall unit designed by Finn Juhl for Bovirke. This model 'BO 71' is made of teak, with pine shelves. The shelves and the teak cabinet are adjustable at any height. Featured with the pine shelves are the brass bookends. Notable is shape of these bookends that echo the shape of the shelves when seen sideways. The shelves also have beautiful brass detailing on the sides. The wall unit features a solid cabinet with two larger and four smaller drawers. A playful element are the split handles in brass.


As a young man, Juhl hoped to become an art historian, but his father steered him into a more practical course of study in architecture. He began designing furniture in the late 1930s, a discipline in which, despite his education, Juhl was self-taught, and quite proud of the fact. His earliest works, designed in the late 1930s, are perhaps his most idiosyncratic. The influence of contemporary art is clear in Juhl's 1939 Pelican chair: an almost Surrealist take on the classic wing chair. Critics reviled the piece, however; one said it looked like a "tired walrus." Juhl had tempered his creativity by 1945, when the Danish furniture-making firm Niels Vodder began to issue his designs. Yet his now-classic NV 45 armchair still demonstrates panache, with a seat that floats above the chair’s teak frame.


Juhl first exhibited his work in the United States in 1950, championed by Edgar Kaufmann Jr., an influential design critic and scion of America’s most prominent family of modern architecture and design patrons. (Kaufmann’s father commissioned Frank Lloyd Wright’s design of the house “Fallingwater.”) Juhl quickly won a following for such signature designs as the supremely comfortable Chieftan lounge chair, the biomorphic Baker sofa, and the Judas table, a piece ornamented with stylish inlaid silver plaquettes. As you will see from the offerings on 1stDibs, Finn Juhl’s furniture — as well as his lighting, ceramics, tableware and accessories — has an air of relaxed sophistication and elegance that is unique in the realm of mid-20th-century design.

Recognized Seller
These prestigious sellers are industry leaders and represent the highest echelon for item quality and design.
Diamond Seller
These expertly vetted sellers are 1stDibs' most experienced sellers and are rated highest by our customers.
Established in 2006
1stDibs seller since 2012
3,044 sales on 1stDibs
Typical response time: 1 hour
Associations
20th Century Specialists
More From This Seller
View All From Seller

$3,653 / set
Midcentury Wall Unit Bookshelf in Teak by Fratelli Proserpio, Italy
By F.P. Fratelli Proserpio 1
Located in Albano Laziale, Rome/Lazio
This wall unit teak was made by Frattelli (brothers) Proserpio in the 1960s in the factory that is still running to this day. This piece is freestanding and has a very attractive siz...
Category