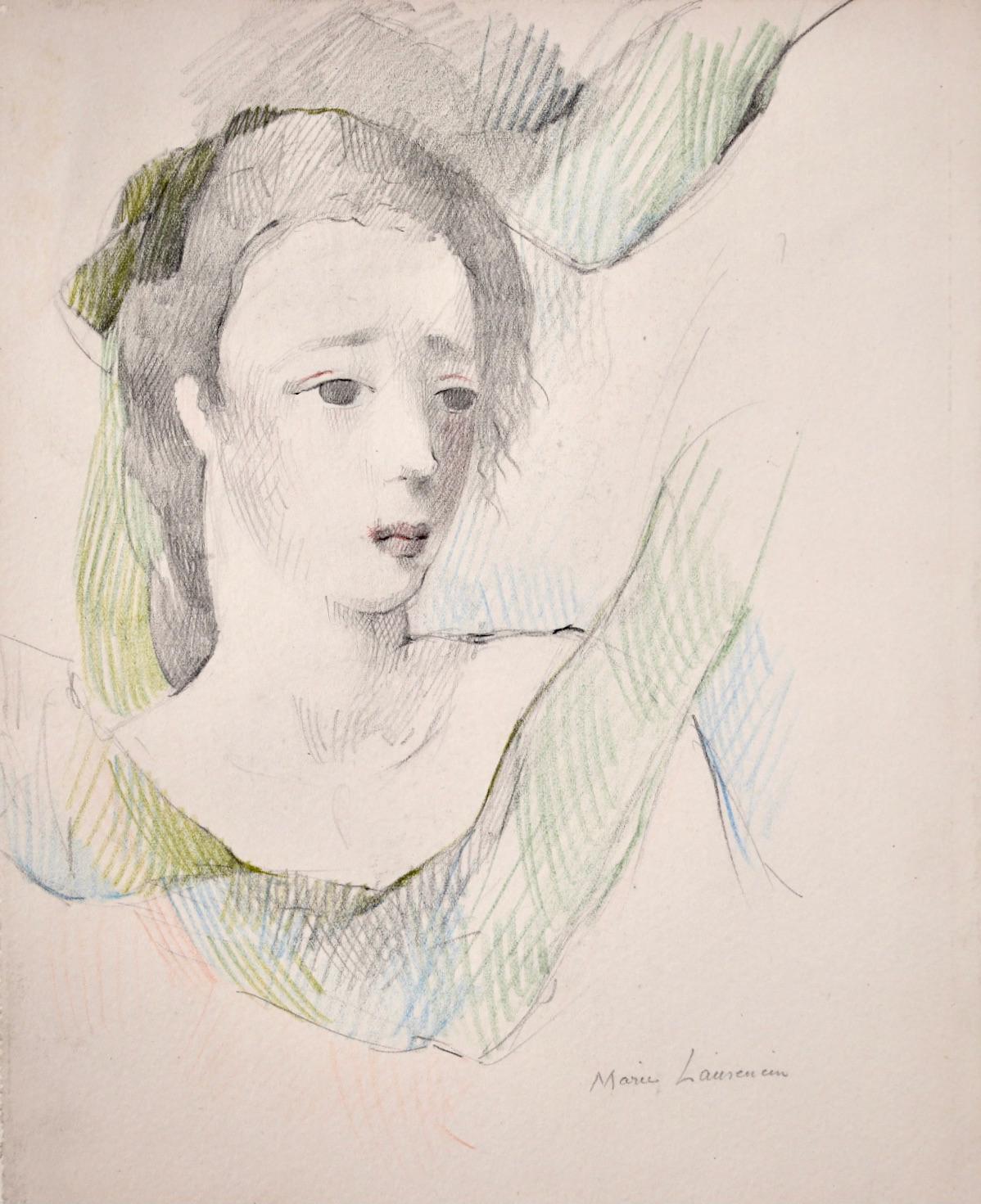 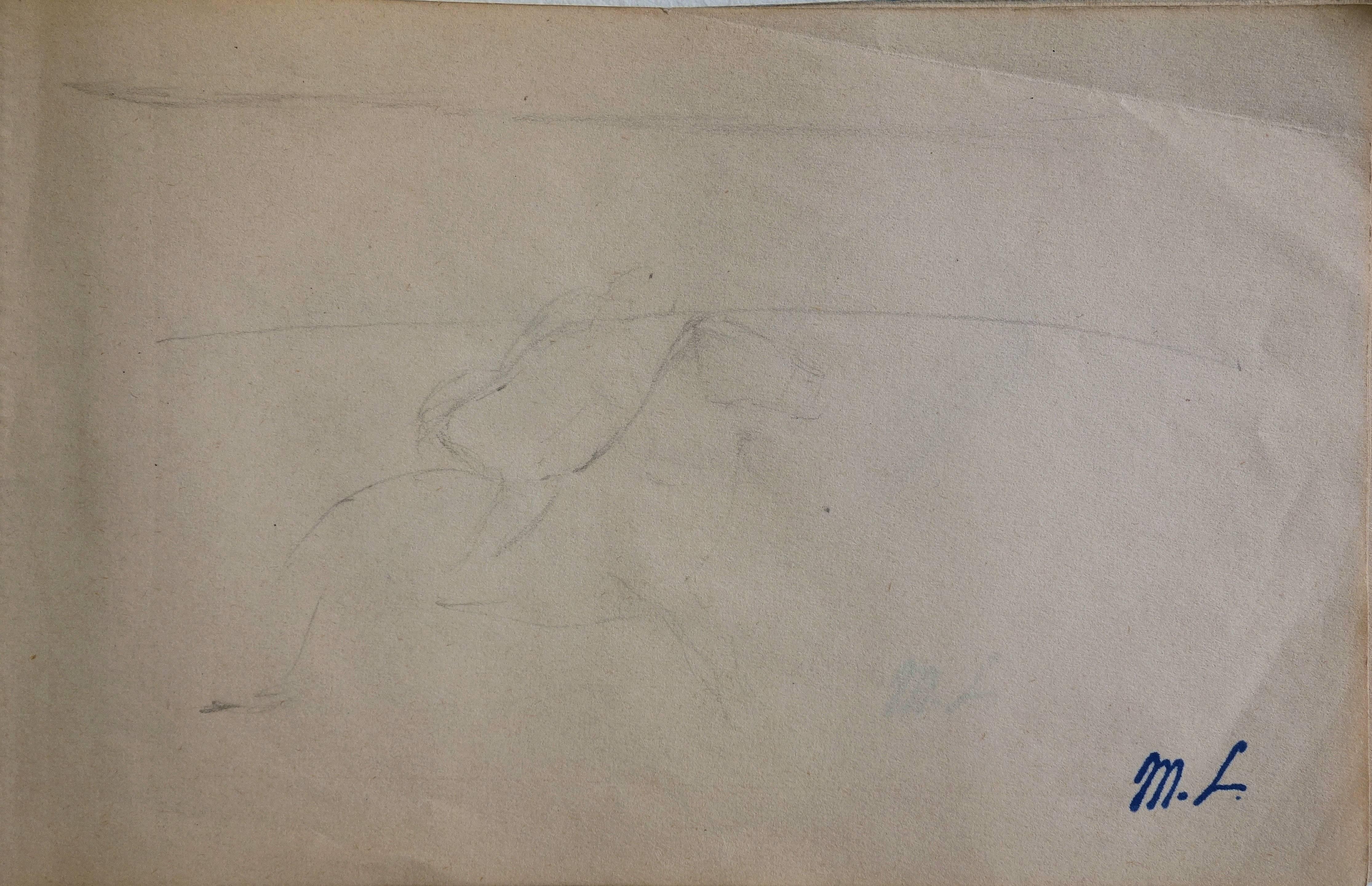 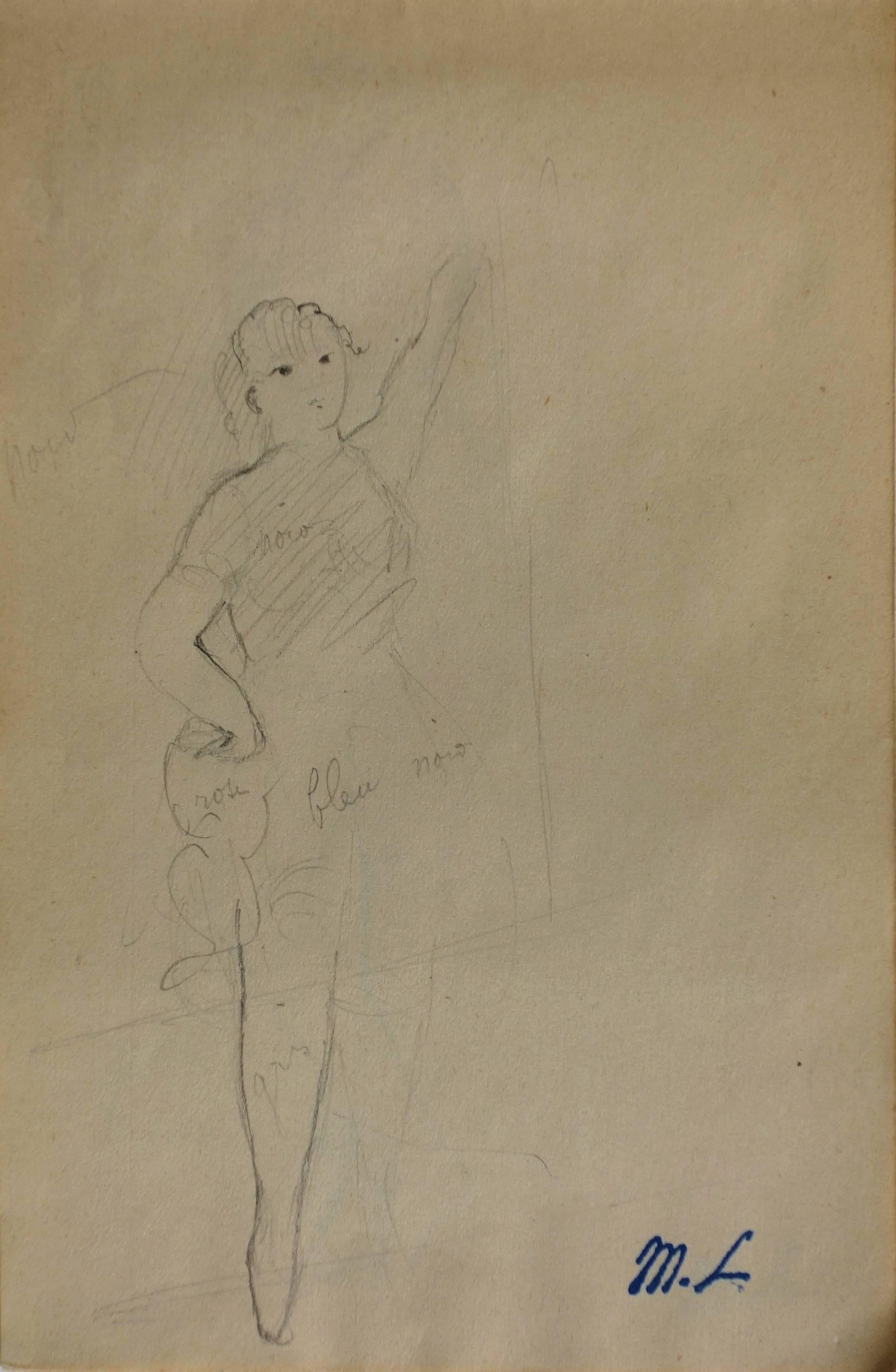 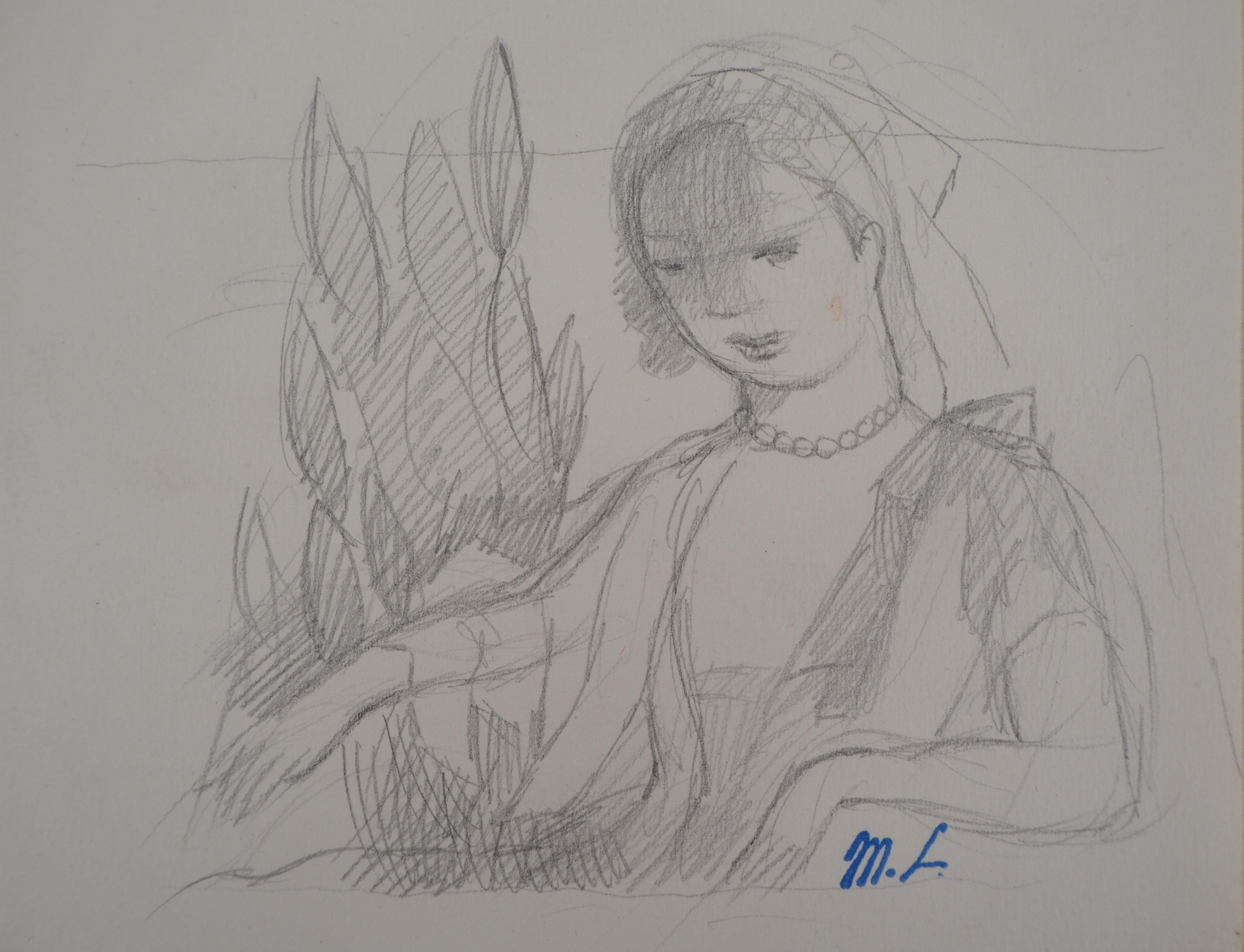 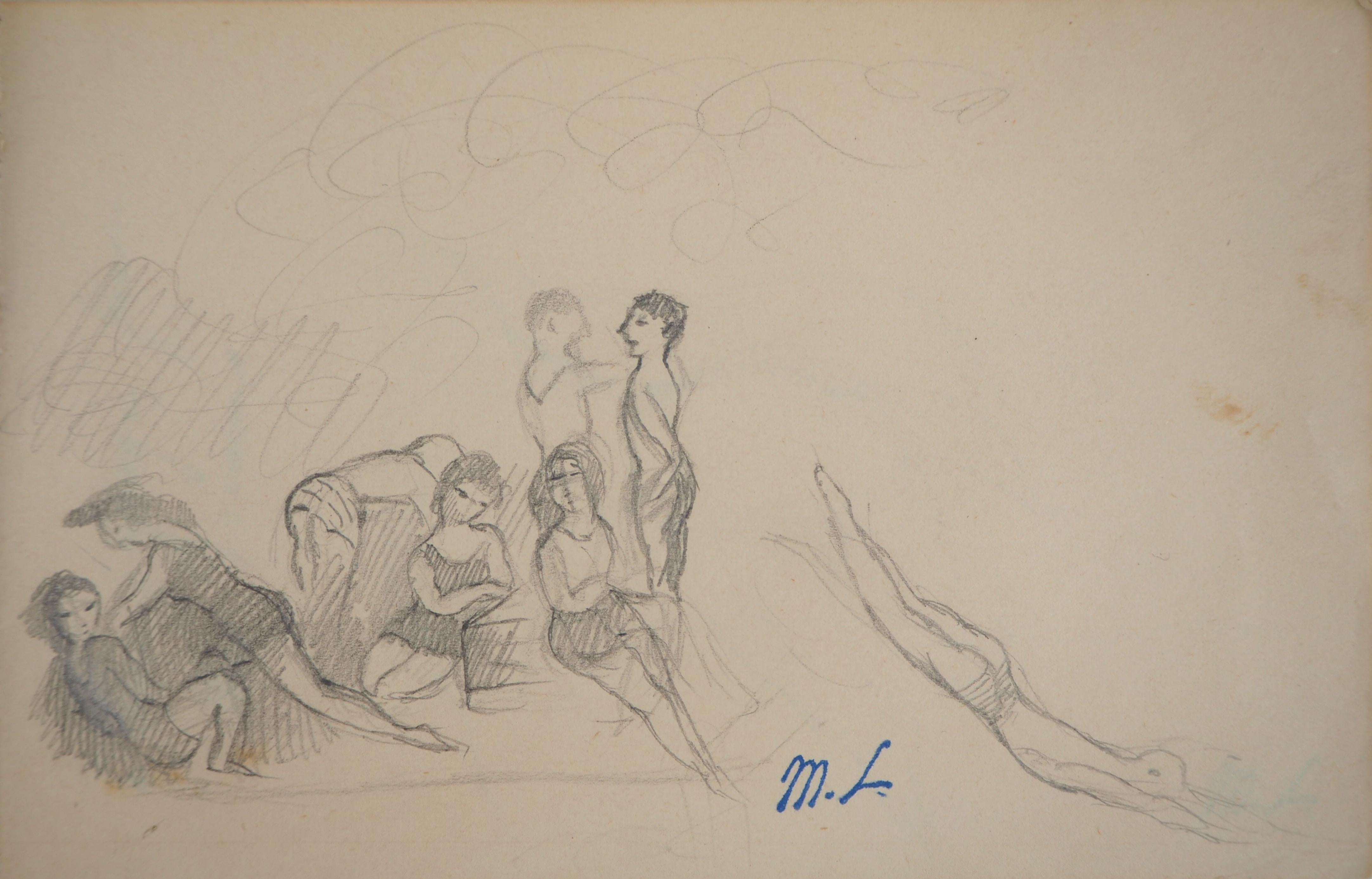 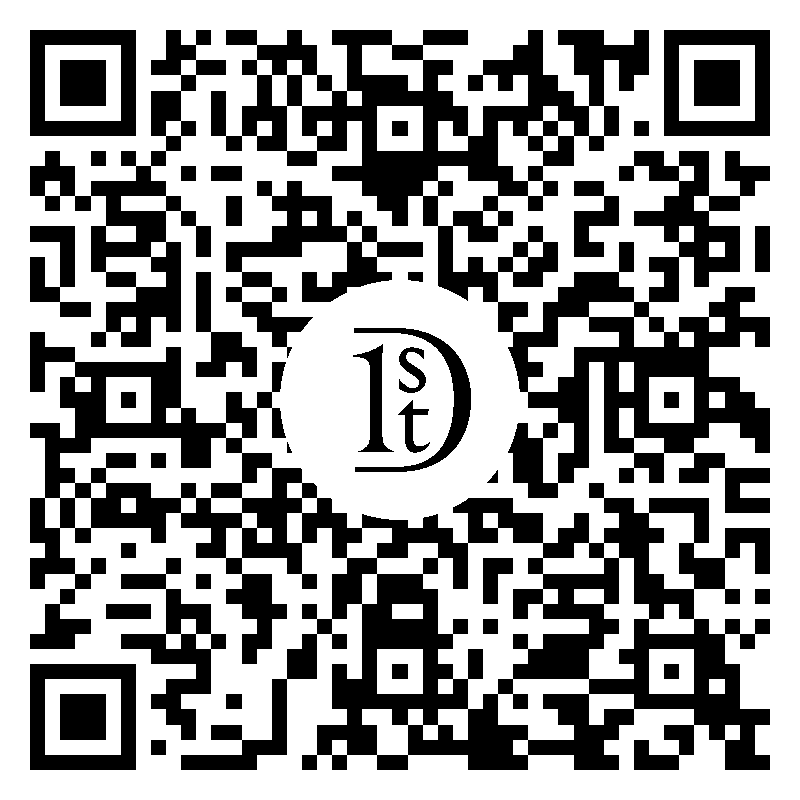 LAURENCIN (Marie): Alice in Wonderland. [Paris: Black Sun Press, 1930]. COMPLETE SET OF SIX COLORED PASTEL DRAWINGS for this unusual Art Deco vision of ALICE, being the actual finished originals made by MARIE LAURENCIN Color guide inside a set of black and white outline designs printed as proofs on wove paper. Her original outlines would have been made directly on lithographic stones for printing whereas this manuscript series was prepared for the printers to create color-separation plates (which explains why the color-printed images in the book do not precisely match the published drawings). Each picture is signed by the artist in colored pencil, with page size measuring 10-7/8 x 14-1/4 inches. Together with: 6 canceled outline proofs from the printers E Desjobert, signed and dated “October 1930”, with their printers’ stamp. These measure 9-3/4 x 11-7/8 inches on tinted BFK wove paper. This is one of the artist’s most famous illustrated books and a memorable version of Lewis Carroll’s “Alice in Wonderland”. 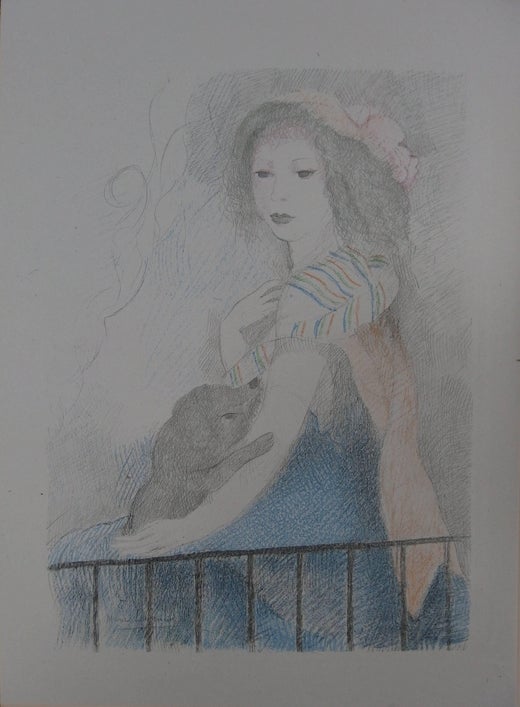 Around 1905 Georges Braque took Marie Laurencin to the Bateau Lavoir, Picasso's famously run-down studio on Rue Ravignan. Laurencin and Braque had both studied at the Académie Humbert. Laurencin originally aimed to paint on porcelain but Braque had the full measure of his colleague's talent and persuaded her to broaden her horizons.

On Rue Ravignan Laurencin found herself in an environment where she could thrive, where painting and literature mingled freely in a state, Picasso said, of permanent cross-fertilization, and at a moment when Fauvism was about to be supplanted by Cubism. Soon Guillaume Apollinaire was devoting to her an important chapter in his The Cubist Painters: Aesthetic Meditations (Peintres Cubistes: Méditations Esthétiques). Married to a German baron she fled France during World War I and lived in Spain, where she met Picabia among others, to return to Paris in 1920.

Laurencin's first canvases are sharper in tone than her later work. From her Ravignan period she left some paintings of real quality which also record the Bateau Lavoir dwellers, famously Picasso and Fernande Olivier, his mistress. Laurencin would enlarge on this composition by grouping together Picasso, Olivier (who wrote Picasso and His Friends [Picasso et ses Amis]), the poet Marguerite Gillot, the poet Maurice Chevrier, Guillaume Apollinaire and André Salmon. The Pont Mirabeau, dear to Apollinaire, can be seen in the background. During her time at Ravignan she also produced burin engravings and woodcuts inspired by fables and romantic street songs.

Laurencin had found her style. She became a painter of doe-like girls, merging realism and fantasy like some poets of her generation. Some see Eugène Carrière's influence in her early works, yet her palette shows much more distinct shading. Laurencin created this unique palette, rich in colors chosen for their softness, the full range of which she explored, deftly and firmly stressing tonalities. Famous among her works are the following: Guitar, Child with Violin, Princess, Sirens, Portrait of Jeannot, Portrait of René Dalize, Portrait of Marcel Jouhandeau and Portrait of André Salmon. She also illustrated many books: Marie Laurencin's Fan (L'Éventail de Marie Laurencin), a collection of poems written for her by writer friends, The Attempt at Love (La Tentative Amoureuse) and The Poems of André Walter (Les Poésies d'André Walter) by André Gide, books by Jacques de Lacretelle, André Salmon, Paul Morand, Louise Faure-Favier and Alice in Wonderland by Lewis Carroll.

Laurencin also pioneered new approaches to theatre set designing, memorably so in the Cocteau and Milhaud collaboration Does (Les Biches) for the Ballets Russes in 1924, and What Do Girls Dream Of? (À Quoi Rêvent les Jeunes Filles?) for the Comédie Française in 1928, even providing themes for the ballet.

She exhibited for the first time in 1907 at the Salon des Indépendants in Paris. In 1912 she showed her work with Robert Delaunay at the Galerie Barbazanges and contributed to the decoration of the Cubist house for the Salon d'Automne. In 1937 at the Petit Palais, Laurencin provided an exemplary sample of her work, including Portrait (1904), Portrait of a Young Woman in a Pink and Black Hat, two canvases executed in 1908 and 1909 and both entitled Guillaume Apollinaire and his Friends (referring to the Picasso circle), Flowers, Two Sisters, Marie Laurencin in Blue (1936), Game of Badminton, Flower Pot, Blue Angel (1929), Young Girls with a Mandolin, Portrait of Madame C.P., Artist and Model, Portrait of Anne-Françoise Mare and Pot and Lemons. In 2002 she featured in the exhibition “Women of Montparnasse” (Elles de Montparnasse) at the Musée du Montparnasse in Paris, chronicling the emancipation of female artists between the wars. In 1994 the Fondation Pierre Gianadda in Martigny presented a retrospective of her work.

About the Seller
New to 1stDibs
Joined in the past six months.
No Reviews Yet
Located in Kingston, NY
Vetted Seller
These experienced sellers undergo a comprehensive evaluation by our team of in-house experts.
Established in 1988
1stDibs seller since 2022
More From This Seller

Portrait de Femme - Cubist Pencil Drawing, Portrait of Woman by Marie Laurencin
By Marie Laurencin
Located in Marlow, Buckinghamshire
A beautiful and elegant portrait drawing of a young woman circa 1920 by French artist Marie Laurencin. The subject has her hair tied back and has a scarf flowing across her chest and...
Category

Marie Laurencin
Woman with the Guitar, 1945