The best restaurants have delicious food and immaculate service, but what keeps us lingering over dessert is a well-designed space. Take a peek at some of the world’s most gorgeous restaurant interiors, then browse our editors' recipe to bring the look home.
by 1stDibs
Pin
Share
Tweet
Email 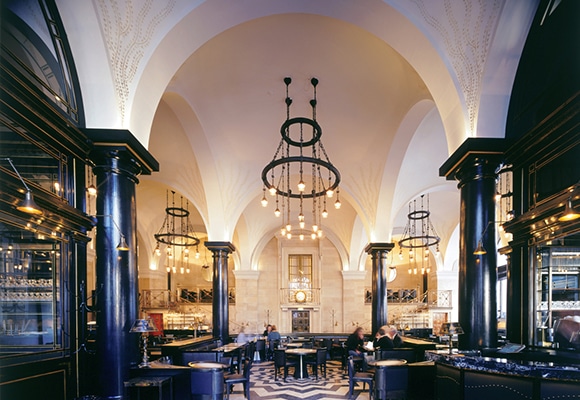 David Collins Studio led the renovation and restoration of London’s the Wolseley, a cafe situated in a listed 1921 building that previously functioned as an automobile showroom and bank. The firm’s work juxtaposed traditional brasserie styling against the space’s grand Venetian and Florentine architecture. 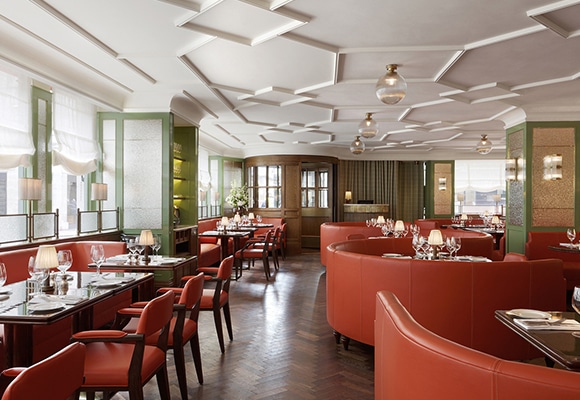 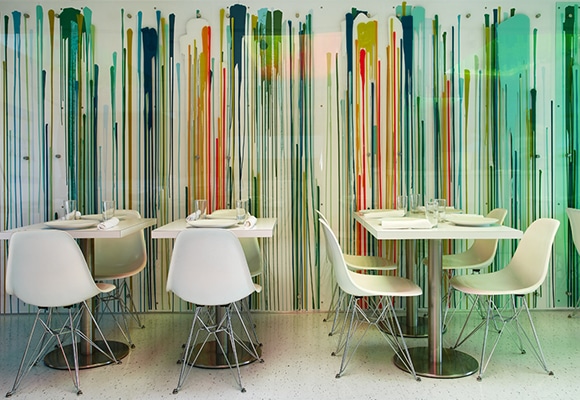 Doug Meyer created the 42-foot drip painting, “Drip #124,” that serves as the colorful backdrop to The Stripe Cafe at the Palos Verdes Art Center in Southern California. Meyer channeled a mid-century modern vibe for the space by using Eames-inspired fiberglass chairs and speckled white floor tile. 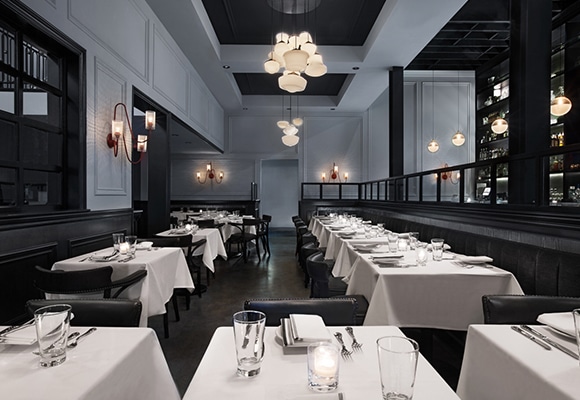 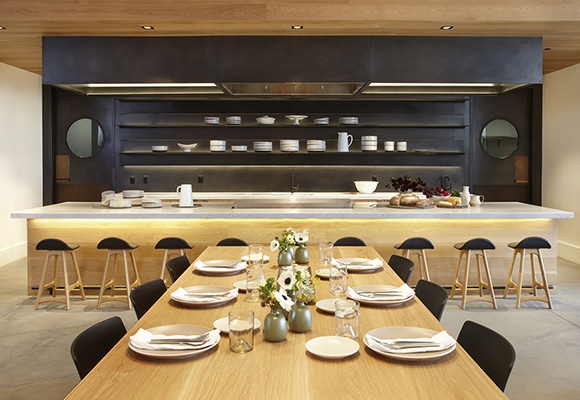 At the Hall Wines vineyard in St. Helena, California, Nicole Hollis created a dining space and open kitchen that focuses on elemental materials like white oak, blackened steel and Cararra marble. The shelving, cabinetry and dining tables are custom designs, and the table settings are by Heath. 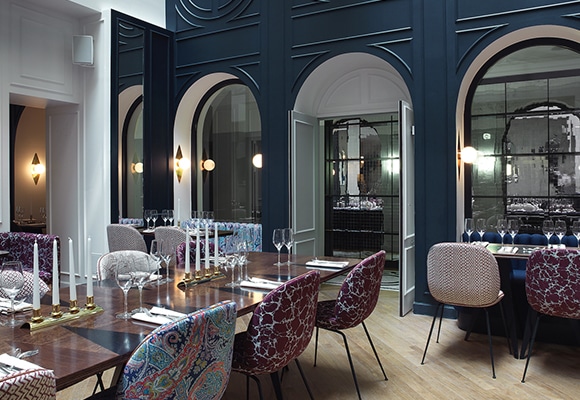 For the restaurant of the Hotel Bachaumont in Paris, Dorothee Meilichzon of Chzon paid homage to the building’s Art Deco roots by emphasizing arched, graphic elements and employing brass accents. The dining chairs are by Gubi. 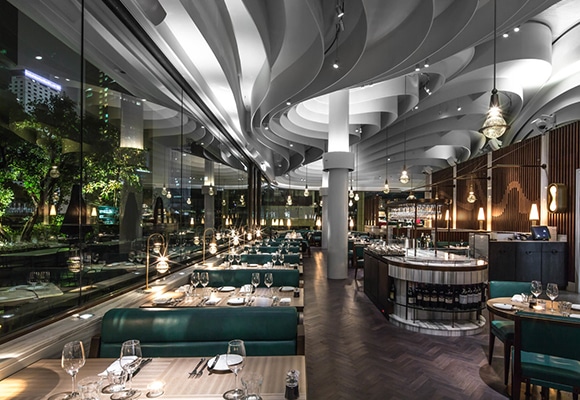 David Collins Studio’s redesign for The Continental restaurant in Hong Kong makes use of tailored, refined forms to contrast with the building’s dramatic, undulating architecture. The rich emerald green palette is a reference to the city’s Lush Peak. 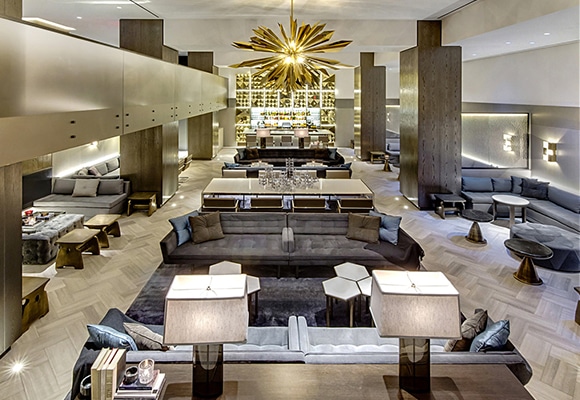 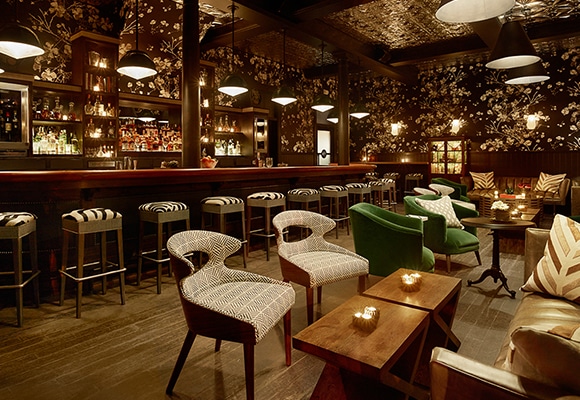 At Wildhawk, a cocktail lounge in San Francisco, Jay Jeffers used the 19th-century spy and actress Lola Montez as his muse to create a dark, glamorous space with an air of clandestine conversation. Jeffers opted for loose furniture pieces, versus banquettes, so that guests could interact flexibly in the room. 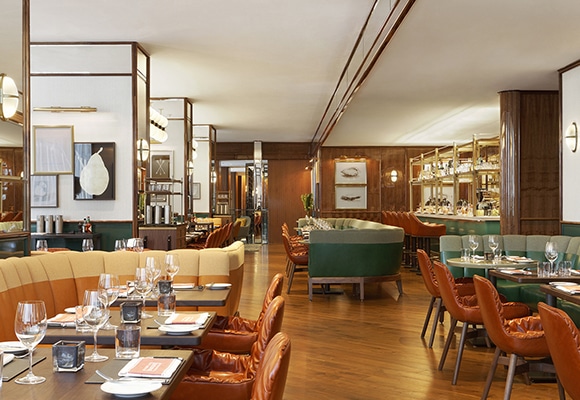 Martin Brudnizki’s design for Toronto’s Café Boulud evokes the style of a classic mid-century brasserie, but with a pared-down, elegant twist. The vintage sideboard was sourced via 1stdibs. 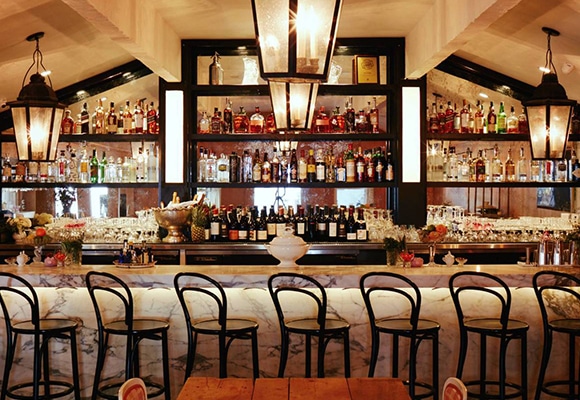 The Estee Stanley-designed Au Fudge, in Los Angeles, is a clubhouse and restaurant that caters to both young children, and their sophisticated parents. Accordingly, Stanley wanted the venue to “feel like a neighborhood hangout… like you’re going to a party at a friend’s house.” Bartop objets and Thonet stools accomplish this nicely. 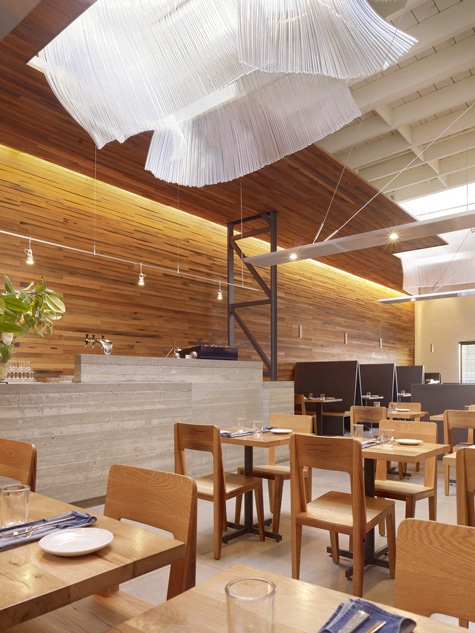 Aidlin Darling intended the organic minimalist interiors of San Francisco’s Bar Agricole to reflect both agricultural and industrial landscapes. The concrete bar and stainless steel sconces were both custom designs by the firm, and the billowing glass sculpture is by artist Nikolas Weinstein. 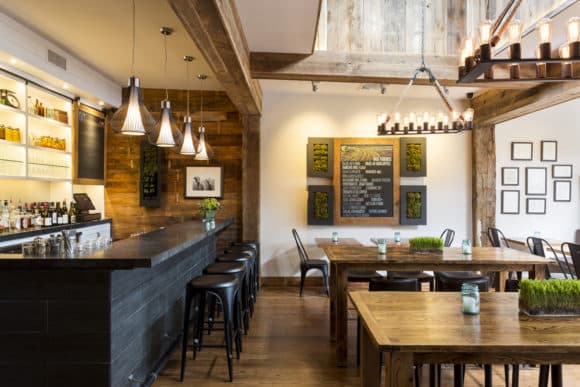 Marcia Tucker’s design for Back 40 Kitchen in Greenwich, Connecticut evokes rural farmhouse kitchens of the 19th century through its use of reclaimed barn wood, an iron and hemp chandelier and a vintage tractor seat. Clerestory windows above the main dining area shine a pleasing, diffuse light on the space. 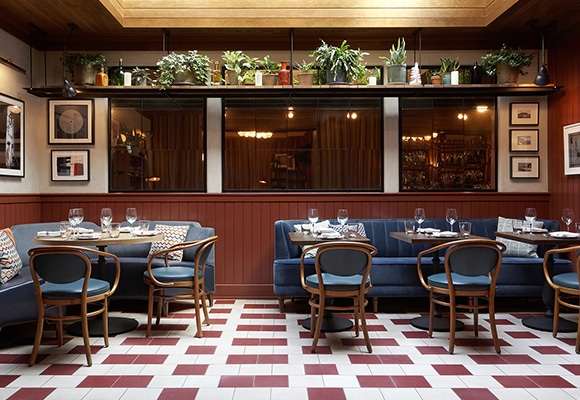