7 Rooms Where the Ceiling Is the Center of Attention

William Randolph Hearst paid more attention than most to every single wall in a room. Most notably, he was interested in the oft-overlooked ceiling. The newspaper publisher was one of the greatest ceiling collectors of all time. He amassed multiple antique ceilings, most from European churches and monasteries, which he purchased for the sprawling Hearst Castle on the California coast.

There’s good reason for an upward glance, as a ceiling covered with the right wallpaper or slick of paint can make a major impact. Here, designers show how they transformed the ceiling into the centerpiece of a room. 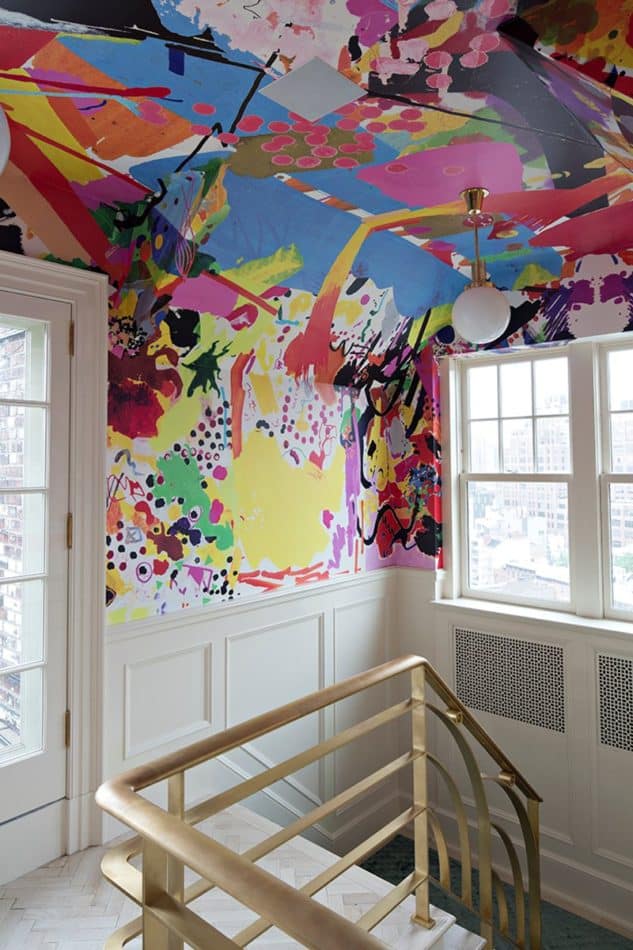 Architecture at Large’s Rafael de Cárdenas gave the stairway of a Greenwich Village two-floor penthouse a completely unexpected jolt of color in the form of a wallpaper installation he commissioned from artist Assume Vivid Astro Focus. The goal was to “highlight a transitional space that often gets overlooked,” de Cárdenas says. “The stairwell now becomes a destination of its own.” By keeping the floor and window frames in neutral shades, he brings the focus on the splashy mural. “Ceilings can be an ideal surface to engage in to create a mood for a space.” 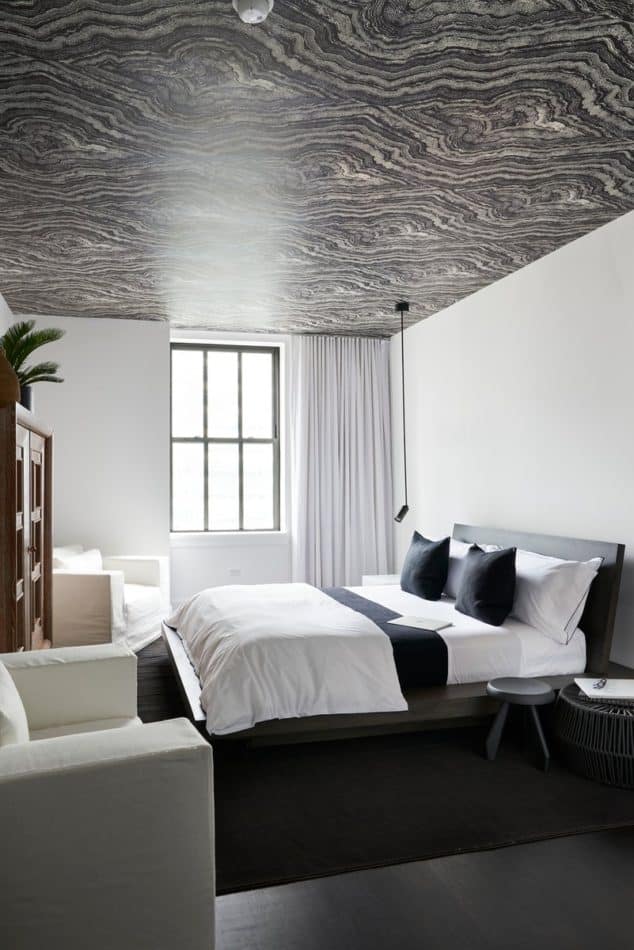 Timothy Godbold kept the color palette in a Tribeca apartment mostly black and white, but he punched up a bedroom ceiling with this clay-coated wallpaper by Zak & Fox and Apparatus. “The inspiration came from a picture I had seen of a quartz ceiling in the ’60s,” says Godbold. “The mood for this room was clean and simple, and I knew it could handle the contrast.”

When adding wallpaper to the ceiling, Godbold notes that the room must have some height, otherwise it can feel like a cave. He also avoids applying this technique in a bathroom — “steam peels wallpaper” — but when utilized in the right space, the outcome can be magical. “I once used a quartz shimmering wallpaper on a coffered ceiling,” he says. “The effected created from candles burning during a dinner party made for a beautiful star-like glimmer.” 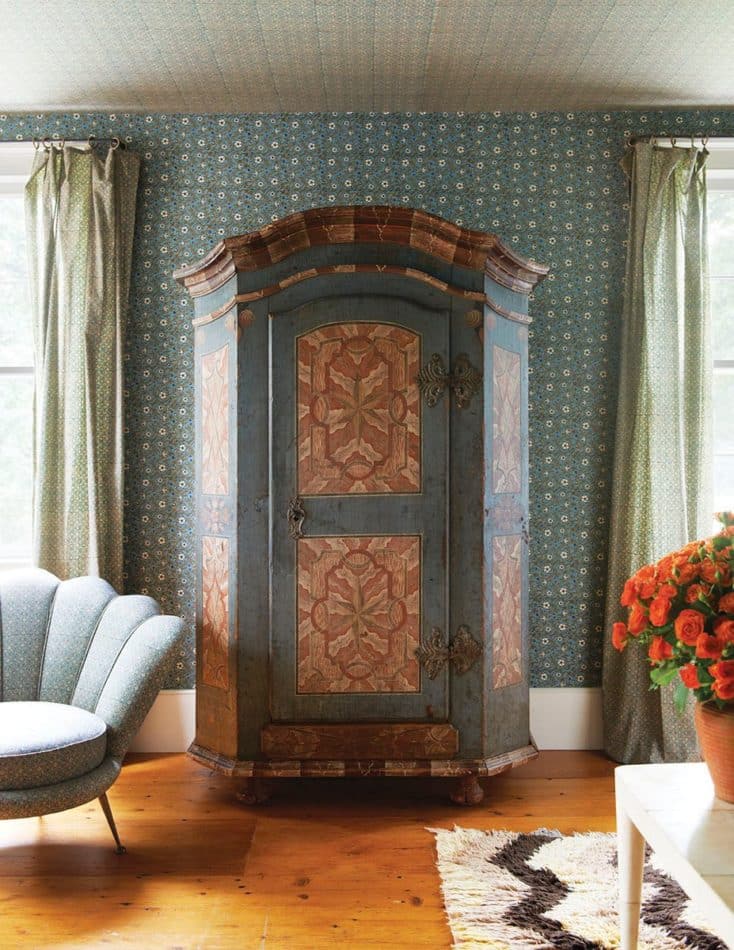 This Billy Cotton–designed East Hampton home has eclectic Americana motifs sprinkled throughout, from a bedroom’s floral wallpaper to the tree-pattern of a wall tapestry. Cotton even added wallpaper to a bedroom ceiling, adding depth and a vintage richness to the space. 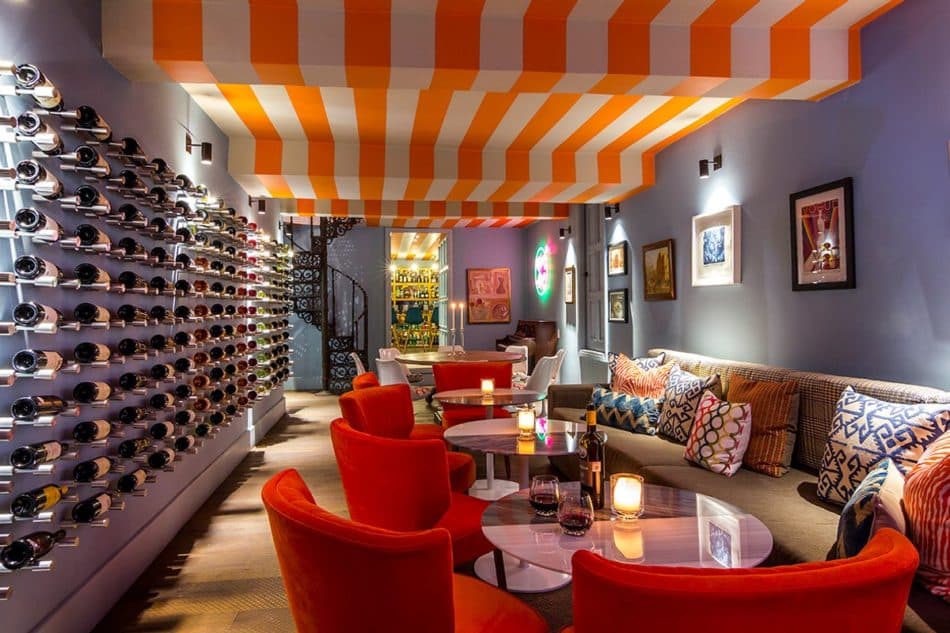 In a vibrantly decorated Mexico City home, Sofía Aspe aimed to give the bar and game room a “joyful, colorful, fun vibe,” she says. “The light blue and orange go together. One is tranquil, the other explosive. A perfect match.” For others dealing with a low-ceilinged room, she recommends not disguising a potential defect, but emphasizing it.

“I rarely leave a ceiling white. I use paint, wallpaper, wood and even marble,” Aspe declares. “I always ask designers and architects to give ceilings the time and dedication they deserve!” 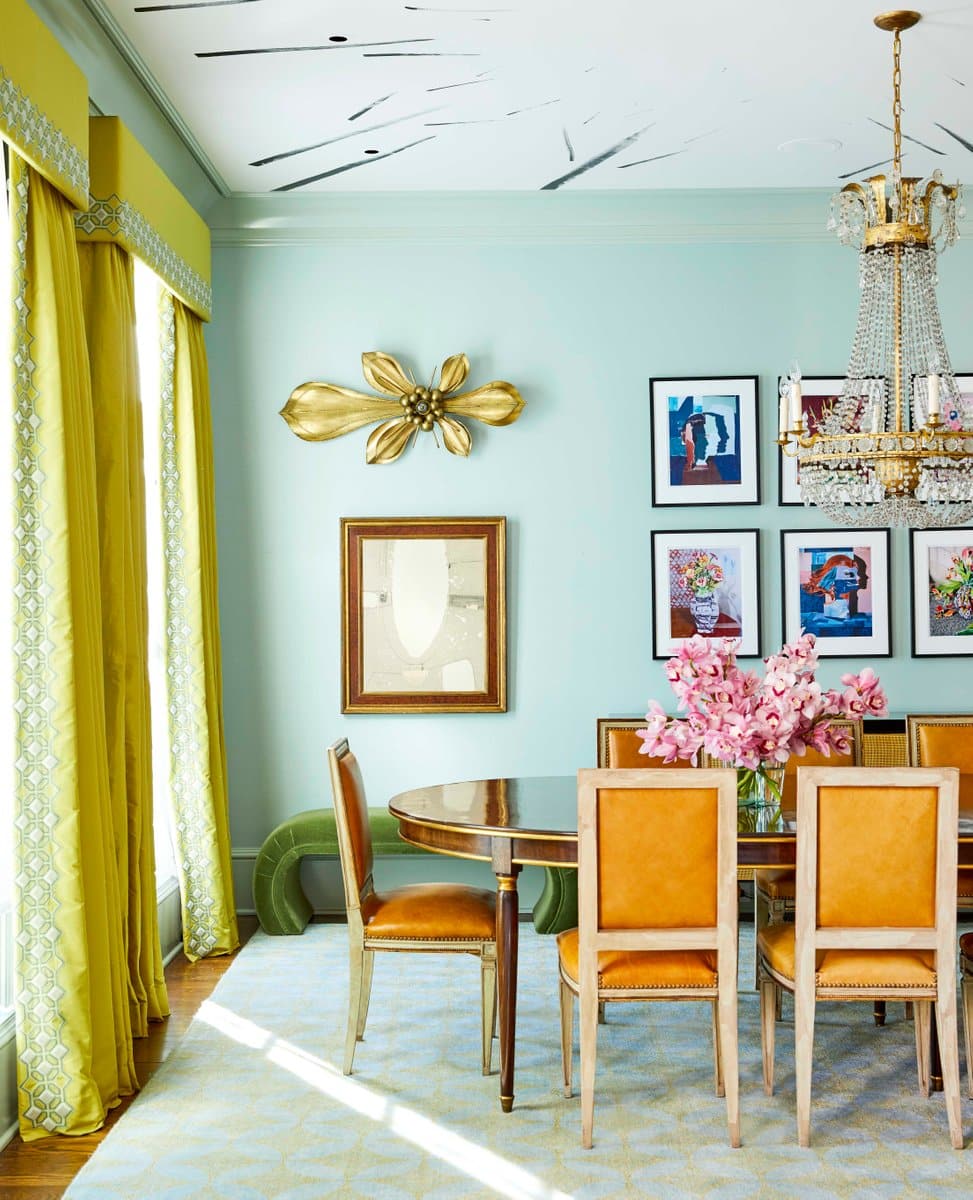 Barrie Benson is known for putting a fun spin on traditional interiors. For this dining room in Charlotte, North Carolina, she created a palette with unexpected color pairings, like gold upholstery on dining chairs and mint-green walls. Finally, she painted bold strokes of silver on the ceiling, adding an irreverent touch to an already unconventional space. 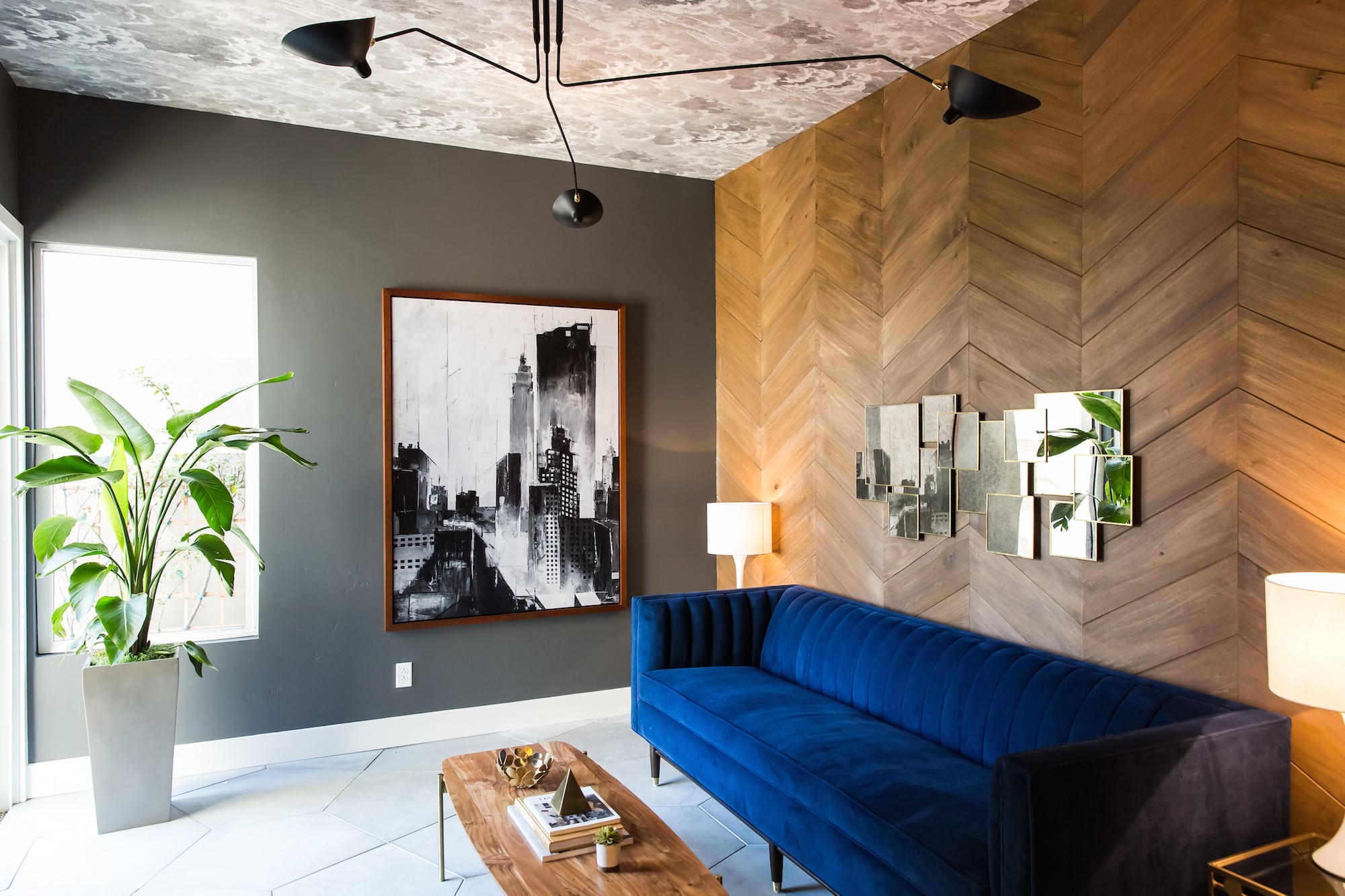 For a Nevada home, Queer Eye designer Bobby Berk decided to bring the outdoors in — aesthetically, at least. He chose Cole & Son’s Nuvolette wallpaper up on the ceiling. “It has an Old World feel,” Berk says, noting that it gives the den “a bit of a noir mood to support the mid-century design.” He kept the rest of the room’s palette muted to let the rich wood grains pop against the charcoal walls. “It has the effect of drawing the eye upwards,” Berk adds. 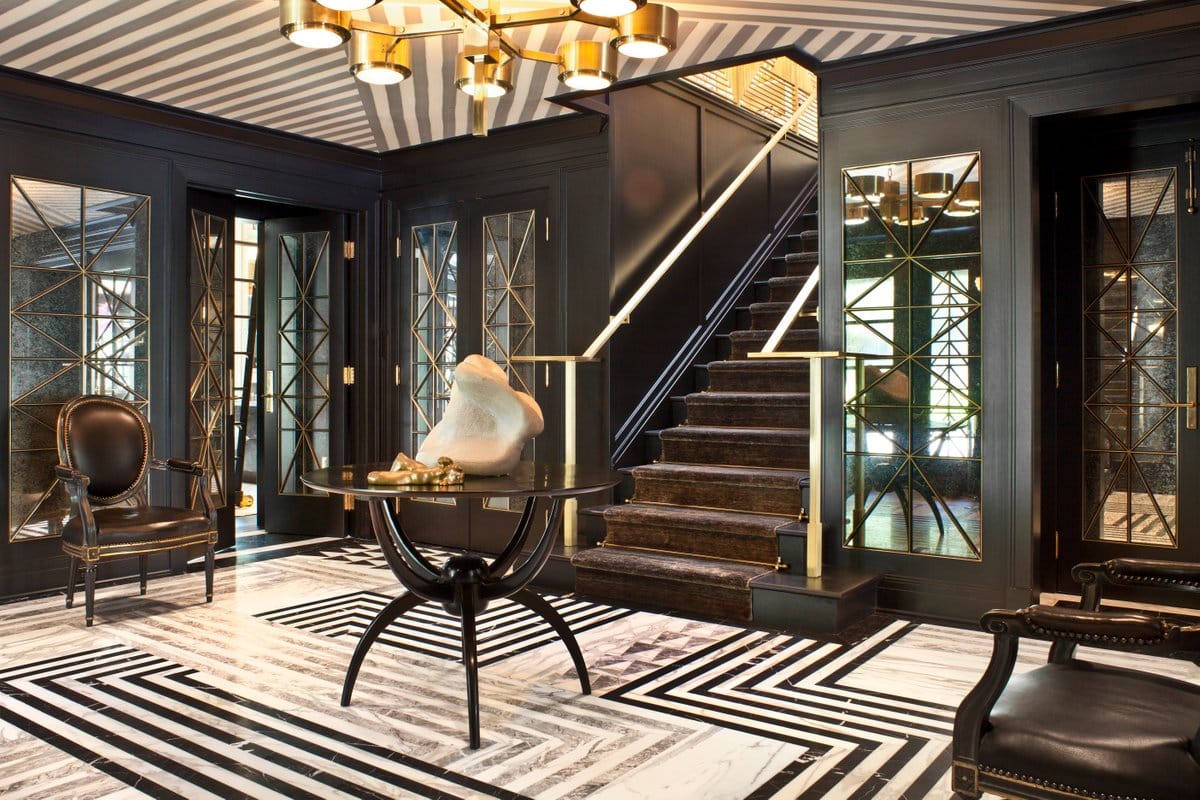 A sprawling entryway in a Mercer Island, Washington home proved to be the perfect canvas for Kelly Wearstler’s more-is-more aesthetic. The floor is a custom pattern of three different marbles, which plays against the similarly striped SJW Studios wallcovering. Combined, these elements make for quite the grand entrance — and first impression.